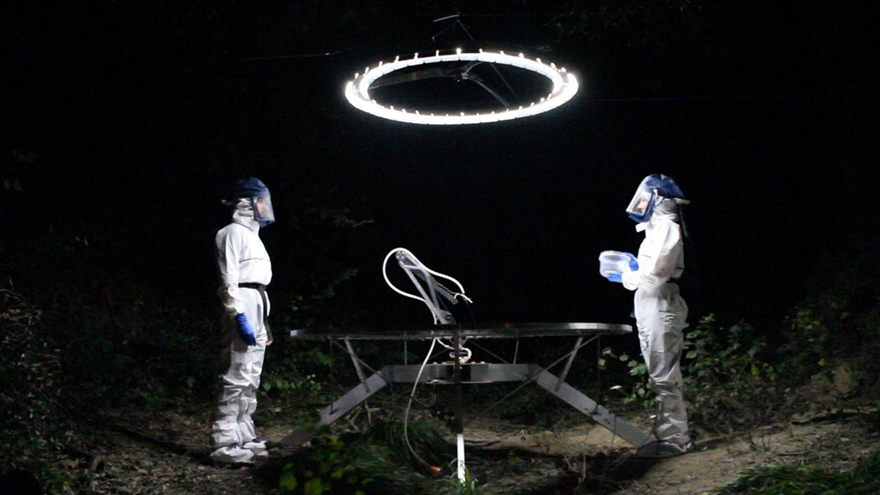 In 1967 Richard Brautigan wrote a poem in which he envisioned:

‘...a cybernetic ecology
where we are free of our labors
and joined back to nature,
[...] and all watched over
by machines of loving grace’.

Forty-four years on, Brautigan’s words acquired new significance when they formed the title of a documentary series (Adam Curtis’s All Watched Over by Machines of Loving Grace, 2011) which claimed that, far from emancipating us from the drudgery of work, humans have rather become colonised by the machines they have built. Curtis ‘exposes’ the fanciful nature of Brautigan’s idealism; not only have computers distorted and simplified our view of the world, but they have done it without us even realising. It’s the ultimate dystopian sci-fi scenario. We are being unwittingly controlled by the very machines we have created.

The world’s foremost ant choreographer – the surprisingly unassuming Ollie Palmer – does not hold such extreme views regarding the sovereignty of machines or the perils of technological hubris. But he's still drawn to cybernetics as a way of exploring our position in the world. For him, machines can provide a perfect metaphor for the way we operate. It's something that becomes clearer to me as I watch the engineer/artist/ architectural designer, dressed in a white forensic suit, inside the cavernous experimental art space of Testbed 1 in Battersea. As he sucks ants through an aspirator and methodically lowers them onto his monolithic construction, I can’t help but compare the oblivious six legged creatures to hapless humans, and Ollie Palmer to, well, God.

He may be a prolifically innovative designer, adept at programming machines, and one of the youngest tutors ever to teach at UCL’s Bartlett School of Architecture, but, he’d be the first to admit it: he certainly isn’t God. The PhD student is half way through an epic six-year, four-stage, ‘Ant Ballet’ project, that began with a prototype called The Godot Machine and is set to be performed in Sao Paulo later this year as part of Pestival 2012/2013. Whilst the exploratory bent to Palmer’s work means that the specific details of the final two stages are yet to be fully determined, the overarching aim (as presented in computer-simulated form at London Zoo and Manchester’s FUTUREEVERYTHING earlier this year) is to lay ‘phantom’ pheromone trails to tap into the communication systems of ants, and, ultimately, he hopes, make them dance. “And,” he adds gleefully, “they won’t even know they are doing it!”

Through collaboration with Dr Seirian Sumner, a research fellow at the Institute of Zoology, and by way of an arduous research process involving over 180 different ant species and over a thousand pheromones, Palmer settled on the perfect subject for his masterplan: the Argentine ant (linepthinema humile). Over the past three years Palmer has become the self-appointed controller of this highly invasive species of ant. As part of the process he has worked with scientists at UCL Organic Chemistry to synthesize a bespoke artificial pheromone (z9:lbald hexadecenal, which, he discovered to his horror, has an astronomical value of $3700 per gramme); engineered a bionic arm to disperse the pheromone trails which trick the ants into believing they are moving towards food; and crowned his construction with a halo of lights which have induced genuine fear of alien invasion. “The concept of paranoia played a huge part in the development of ideas,” Palmer explains and he cites both Stanley Kubrick and the mathematical decision-making strategies of the Cold War-era RAND Corporation as overriding influences on his work. As he relays how he is imposing hierarchical control upon a system which, conversely, relies on an emergent collective intelligence and alludes, with a wry smile, to the later stages of the project becoming “more sinister”, I wonder if he hasn’t momentarily morphed into a sort of 21st century version of Dr. Strangelove.

Palmer may possess the vaulting ambition to impress any world leader but his megalomaniacal allusions are defiantly, knowingly tongue in cheek. It's not conquest, but innovation and investigation, which fuel his process. In fact, the more I learn about the first half of Palmer’s ‘Ant Ballet’ project, the more I start to wonder if it’s not more a case that the ants are starting to control him. He readily concedes that his chosen species of ant have dictated the direction of the project more than he ever could have anticipated. First they led him to La Floresta, near Barcelona, where he was introduced to warring super-colonies and the esteemed authority on these insects, Professor Xavier Esplander. Then, when he hoped to bring his formic friends back on a ferry to the UK, he had to heed warnings from the Zoological Institute and DEFRA that doing so could cause considerable damage to existing ecosystems... and so he remained encased within the sweltering heat of his forensic suit under the unrelenting Mediterranean sun. When he tried to conduct experiments at night under more bearable temperatures, the ants refused to comply. They simply weren’t hungry.

Of course the idea of ants having such a powerful hold on a human operator, or vice versa, may appear absurd, but this absurdity would not have been possible without mindful, symbiotic understanding between choreographer and dancers. As if to illustrate this, and as if prompted by the project's early nod to Samuel Beckett, one particular ant appears determined to convert Palmer’s test bed into a stage worthy of The Theatre of the Absurd. This UK ant – an understudy for the Argentine ant – spends the entirety of the afternoon, purposefully, yet pointlessly, carrying the corpse of another ant on her back. Palmer marvels at its incredible strength and explains that the ant's instinct is to carry away the carcass to prevent disease spreading within the colony, but here there is no possible burial place. There is only the endless white of the machine's test bed. As we trace the desultory course of this insectile Sysyphus, condemned to its insurmountable task, I feel an uneasy empathy with this creature, so seemingly oblivious to the forces which control her.

We may be a long way off a world where machines have freed us of our labours; but this particular creation - developed through a tussle of human and ant, individual and group behaviour - at least provides a way of better understanding ourselves and our place within a cybernetic ecology. Even if we do have to work for it.

FutureFest
Brain Collecting: the Berlin Museum of Medical History
More than Honey
In Pollinators We Trust (or else)
The Hidden Neuroscience of Leonardo da Vinci