Encore Plus Tard: Agawa and the Artist

Category
Art & Aesthetics
Travel & Transportation
Wildlife & Wilderness
Encore Plus Tard: Agawa and the Artist
by Gene Threndyle
Published: Nov 25, 2017
Standfirst
Few regions of land in Canada exceed the spectacular beauty of the Agawa Canyon in Northern Ontario. At the height of this autumn's blaze of colour, our artist-gardener correspondent takes the same train that carried the progenitors of one of the great movements in landscape painting anywhere.
Body 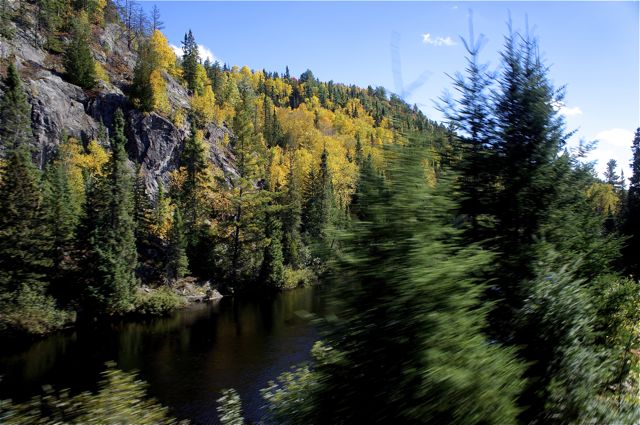 The northern temperate forest gives way to the trees of the boreal forest.

In Northern Ontario the landscape can seem like the left over wreckage of one pre-historic cataclysm after another. Comet impacts, mountain and cliff forming movements of earth, thousands of years of crushing and scraping glaciation, and torrential flooding events when those ice sheets melted, have formed an environment at once brutal and comforting.

The Algoma Central Railway (ACR) rocks and lurches through one such tract of land that is just about as close to wilderness as this planet gets anymore. It leaves Sault Ste. Marie on the St. Mary’s River, between Lake Huron and Lake Superior, and heads north by northwest to Agawa Bay on Superior, the largest of the Great Lakes.

Agawa Bay is one of those places that reliably emanates a heightened reality. Like many areas on Superior, it seems to possess a consciousness of its own, a genius loci. Birds can behave fearlessly there, walking down paths in front of you like temple monkeys, dancing in front of you and displaying their fanned tails like miniature peacocks.

The Agawa River mouth, where it quietly flows into the lake, gives little hint of its tumultuous course. A few kilometers away, on rock faces coming right out of the bay, are red petroglyphs that have not been washed off by centuries of waves, sun and winter weather. A horned creature with a dragon-like back and tail seems to be the very spirit of Gitchigoomie, the name of the lake in the Chippewa language. 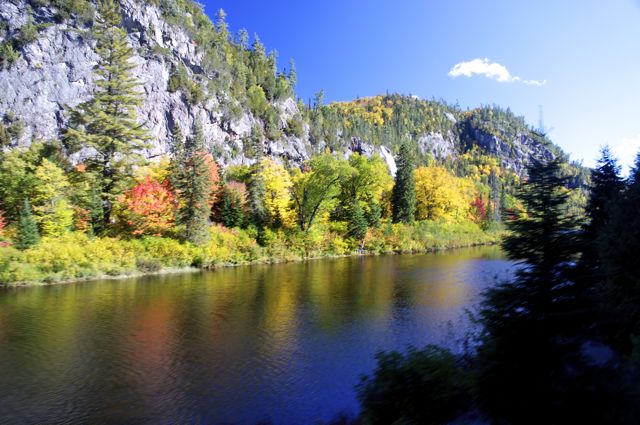 The train turns away from the bay and heads up towards the Agawa Canyon on its 296 mile trek to Hearst, Ontario. The canyon is the last refuge of the colourfully deciduous sugar maple. This is the northern edge of the northeastern temperate forest. At its southern edge in the Carolinas and Northern Florida it grows yellow pine, tulip poplar and gum trees. Up here it grows not only sugar maples but white and red pine, jack pine and black oak mixed in with increasing amounts of paper birch, poplar and black spruce.

At the end of line, Hearst is well into the boreal forest, and little notion of the south remains. It is too cold for all pines except some scrawny jack pines, but trembling aspen, poplars, black spruce, balsam fir and tamarack still thrive. Beavers and their dams can be seen everywhere and in the late spring and summer an infinity of insects cloud the air. Small songbirds come from as far away as South America to lay their eggs here and feast on the mosquitoes and black flies.

There would be no more landscape paintings from this country that aped Constable or Corot.

The railroad was finished in 1914 to bring lumber and ore down to the “Soo”, and Sault Ste. Marie still has steel mills and pulp and paper mills that almost miraculously have not relocated to China or Brazil. Right from the beginning the train was also used by people wanting to experience wilderness, and by painters, specifically the Group of Seven, wanting to capture the wild, northern landscape.

The post-impressionist landscape paintings of those artists and the canvases of others at the time, especially Tom Thompson, who died young in 1917, have had a lasting impact on the central Canadian psyche. From this time forward there would be no more landscape paintings from this country that aped Constable or Corot. 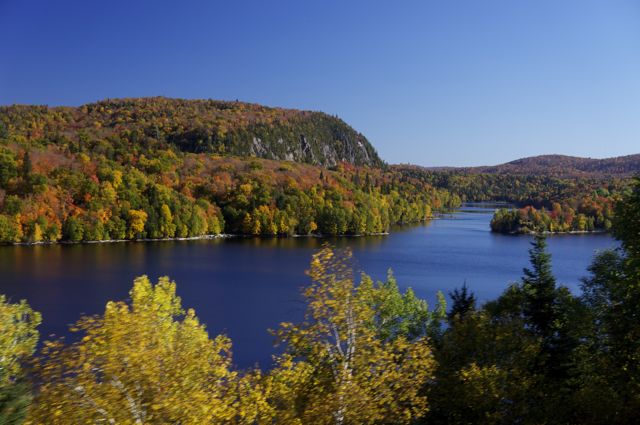 Montreal River, scene of The Solemn Land, by J.E.H.MacDonald.

Vibrant colour was now the Canadian birthright and all terrain less than a day’s drive from the populous south would become “cottage country.” Georgian Bay, Muskoka, Haliburton and Kawartha would be the summer places for any child of means, thanks, at least partly, to these painters. Reproductions of their paintings were hung in libraries and high school hallways. They were printed on textbooks, calendars and day planners.

By the late 50’s and 60’s a new generation of artists born at the height of the Northern Landscape craze were set to take over. They viewed all these pine trees very skeptically. They went to live in New York and were witness to Jasper Johns and Jackson Pollock. When and if they returned they were not about to take the Algoma Central Railway, and, if they did, certainly not about to take oil paints or brushes.

Among these was Michael Snow who, with his wife, the painter Joyce Wieland, did return to Toronto in the early 70’s. Snow’s “Walking Woman” works were pop-inspired images that he repeated and reworked over and over. He also made films and photographs and exhibited work at the Venice Biennale, Documenta and the Centre Pompidou. Perhaps his most popular piece is a sculpture of a flock of geese that have been unsuccessfully trying to fly out of the Eaton’s Centre, an indoor shopping mall in downtown Toronto, ever since it was built.

At mile 207 it says, “Height of Land – All water from this point northward now flows into James or Hudson Bay far to the north.”

In 1977, Snow produced an exhibition of photographs taken in the Group of Seven room at the National Gallery in Ottawa. This was the old National Gallery. It was a converted office building and the dreary, dysfunctional product of a committee of stymied and tortured imaginations.

Snow made all the photographs blurry. He said he wanted to make the paint fluid again and blend the colours together. He had originally wanted to do this in the Matisse room of the Museum of Modern Art in New York, but ended up doing it in Ottawa. Perhaps because of Matisse and the fact that it was first exhibited in France, he called it “Plus Tard.”

It may be too that his intentions were more subconscious and Oedipal. It’s all fine and good to want to blur paint, that long ago dried, but it’s hard not to see a new generation taking the piss out of an older one. For someone born in 1929, these painting had been the altar of high art in this country forever. For a nation whose intelligentsia were constantly trying to come to terms with a collective self-identity, these had finally become real home-grown art. By the ‘70s they were also low hanging fruit for multi-media artists.

Riding on the platform between the passenger and the baggage car on the ACR this September, I unexpectedly found myself thinking about “Plus Tard.” Even though the train only gets up to speeds of about 35 mph (everything on this trip is in miles), the scenery seems to flash by. 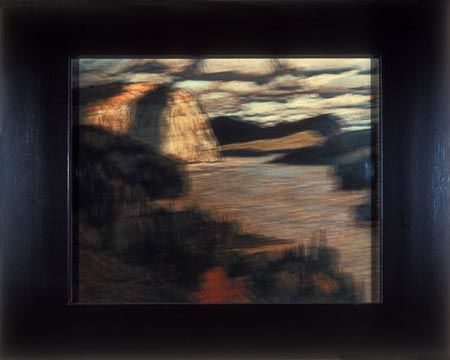 Plus Tard, By Michael Snow. From 'The Solemn Land.'

You are given a modest information sheet when you buy your ticket that explains what you will be seeing at various mileposts. If you are looking at it instead of the scenery you will be told, “View at right of Mileage 84 into Batchewana River Valley.” At mile 207 it says, “Height of Land – All water from this point northward now flows into James or Hudson Bay far to the north.”

To take advantage of all the photographic opportunities, it is necessary to ride on the platform between the passenger and the baggage car. There is a sign prohibiting this but luckily it is not enforced and no one seems to mind you holding yourself out as far from the train as you can, intently staring through the viewfinder of your camera.

But the speed of the car still makes most of the pictures blurry in the foreground. Digital cameras are also confused by the movement of the train, not sure what light level to adjust to, or what to focus on. As a result most of my pictures were as experimental looking Michael Snow’s 1977 exhibition. Then I got thinking that maybe Snow had been on that train and that he was simply trying to give the same effect in the exhibition gallery. Or, I thought that maybe he had subconsciously picked up on all those generations that had boarded the train and experienced not only blurred photographs but a blurred visual memory of that terrain. Capturing movement was not something the Group of Seven tried with their painting, but they must have marveled at the rush of scenery at 35 mph back in 1916. I certainly did 97 years later. ≈© 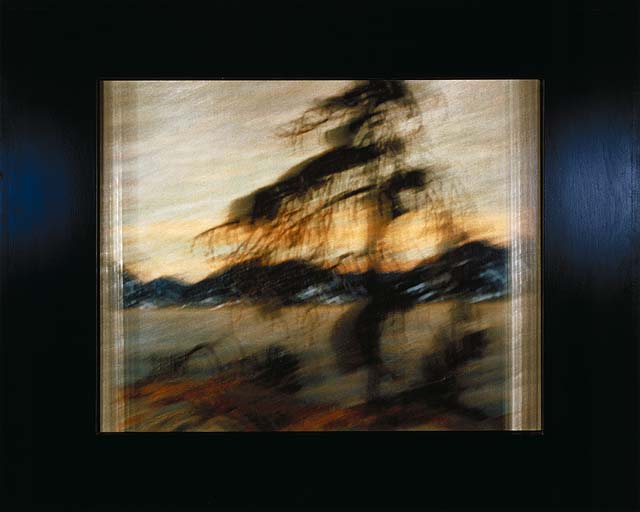 Plus Tard, by Michael Snow. From 'West Wind" by Tom Thompson.

This article was first published in The Journal of Wild Culture, Dec. 6, 2013.

GENE THRENDYLE is a professional gardener who has been planning, building and maintaining private and public gardens in Toronto for overr 2 decades. He was a participant, consultant and in charge of maintaining the Artists’ Gardens at Harbourfront from 1998-2008. Gene is also an artist and has exhibited work and been involved in the arts in Toronto for over 20 years. http://genedigs.com 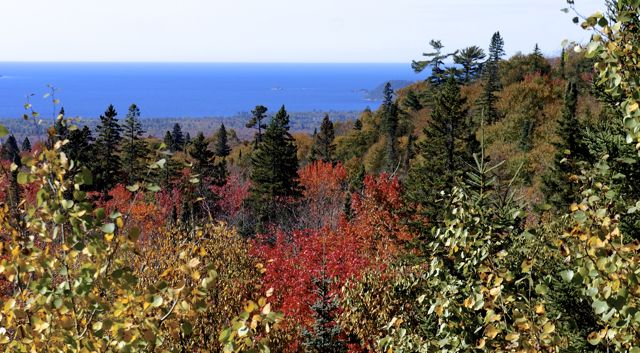 Encore Plus Tard: Agawa and the Artist
Wild Culture at the Venice Biennale, 2013
Unsung masters of Southern Light: Australian Impressionists in London
There are no beginnings
Have Time, Will Play: 5 Easy Steps to Sketching Nature