The Expanding Company of Rogues

Category
Business & Corporate Culture
Suffering & Violence
Politics & Power
The Expanding Company of Rogues
by James McEnteer
Published: May 07, 2017
Standfirst
The International Criminal Court in The Hague has accused Philippines President Rodrigo Duterte of committing extrajudicial executions since 1988. Without consulting the State Department, Trump recently invited the Filipino leader to visit the White House. Whether it's the 57-story Trump Tower going up in Manila or wanting to cosy up to the hard-on-drugs crowd, does it really matter? The thugs are on top. Photographs by Daniel Berehulak.
Body

At a campaign rally in February 2016, Trump said: "You know what I hate? There's a guy, totally disruptive, throwing punches, we're not allowed to punch back anymore. I love the old days. You know what they used to do to guys like that when they were in a place like this? They'd be carried out on a stretcher, folks," Trump said to cheers. “Here's a guy, nasty as hell, screaming at everything else when we're talking, and he's walking out, and we're not allowed… I'd like to punch him in the face, I'll tell you.”

Trump’s embrace of his tough-guy persona includes cozying up to genuine authoritarians, like Russia’s Vladimir Putin, Israel’s Benjamin Netanyahu and Turkey’s Recep Erdogan. Since suspicions of Russia’s possible interference in U.S. elections surfaced in the media, Trump’s voluble admiration of Putin has subsided. But he was among the first (and the few) world leaders to congratulate Erdogan on the passage of a paranoid referendum granting him dictatorial powers.

International observers challenged the fairness of the vote. But mass firings and arrests quickly followed, including 4,000 public officials sacked in a single day from the justice ministry, the armed forces and universities. Access to Wikipedia is now banned along with televised dating shows. Hotbeds of sedition?

In Manila a huge billboard of the presidential daughter and adviser advertises a unique opportunity.

And now Trump has a new crush, on the murderous ruler of the Philippines, Rodrigo Duterte. Flagrantly contemptuous of world opinion, Trump congratulated Duterte on his campaign to rid his islands of drug dealers, an effort which has claimed the lives of an estimated nine thousand victims — dealers, users, bystanders and many children — since Duterte took office last June. Duterte remains defiant about his relentless murder machine despite condemnation from many countries and the United Nations.

Last week Filipino lawyer Jude Sabio filed a complaint with the International Criminal Court in The Hague accusing Duterte of "repeatedly, unchangingly and continuously" committing extrajudicial executions since 1988. Sabio claims that Duterte has been waging mass murders, constituting crimes against humanity, starting during his term as mayor of Davao City, with his Davao Death Squad, up to his current bloody presidential drug war.

Duterte sometimes denies, and other times brags about, his murderous ways. During his 22-year reign as Mayor of Davao, Duterte said he rode his motorcycle around the streets at night looking for trouble. He has said he personally killed three men during a hostage-taking situation. “I didn’t really know how many bullets from my gun went through inside their bodies.”

In December Duterte threatened to throw corrupt politicians out of a helicopter. He claimed he had already done that once. And he pledged to “personally gun you [drug dealers] down… until the last drug lord is killed.”

Also offensive to his countrymen, Duterte oversaw the reburial of former Philippines dictator Ferdinand Marcos in the national Heroes Cemetery, thirty years after he was driven from power by a popular revolution. This honor insults the memory of tens of thousands of Filipinos who were imprisoned, tortured and killed under Marcos’s despotic martial law regime. But Duterte, who had Marcos family support for his presidential run, called the former ruler a “Filipino soldier.”

When Obama’s State Department expressed concern last fall at the volume of extra-judicial killings in Duterte’s drug war, Duterte called Obama “a son of a whore” and intimated he might drop relations with the United States in favor of closer ties with China and Russia. But Trump can be counted on not to raise the troublesome issue of human rights. He likes it rough.

He called Duterte last December, and again last weekend, to congratulate him on his tough stance against drugs. Apparently without consulting the State Department or the National Security Council, Trump invited the Filipino leader to visit him at the White House. But the visit may not simply be one of pure admiration and machismo by association. It appears there is hardly an issue, a place or a person about which Trump is disinterested.

The Trump Organization is about to open a $150 million, 57-story luxury residential tower, Trump Tower Manila, where apartments begin at $160,000. Presumably the view from up there over the vast slums of the city will be magnificent. Right now in downtown Manila a huge billboard featuring an image of presidential daughter and adviser, Ivanka Trump, advertises this unique opportunity. 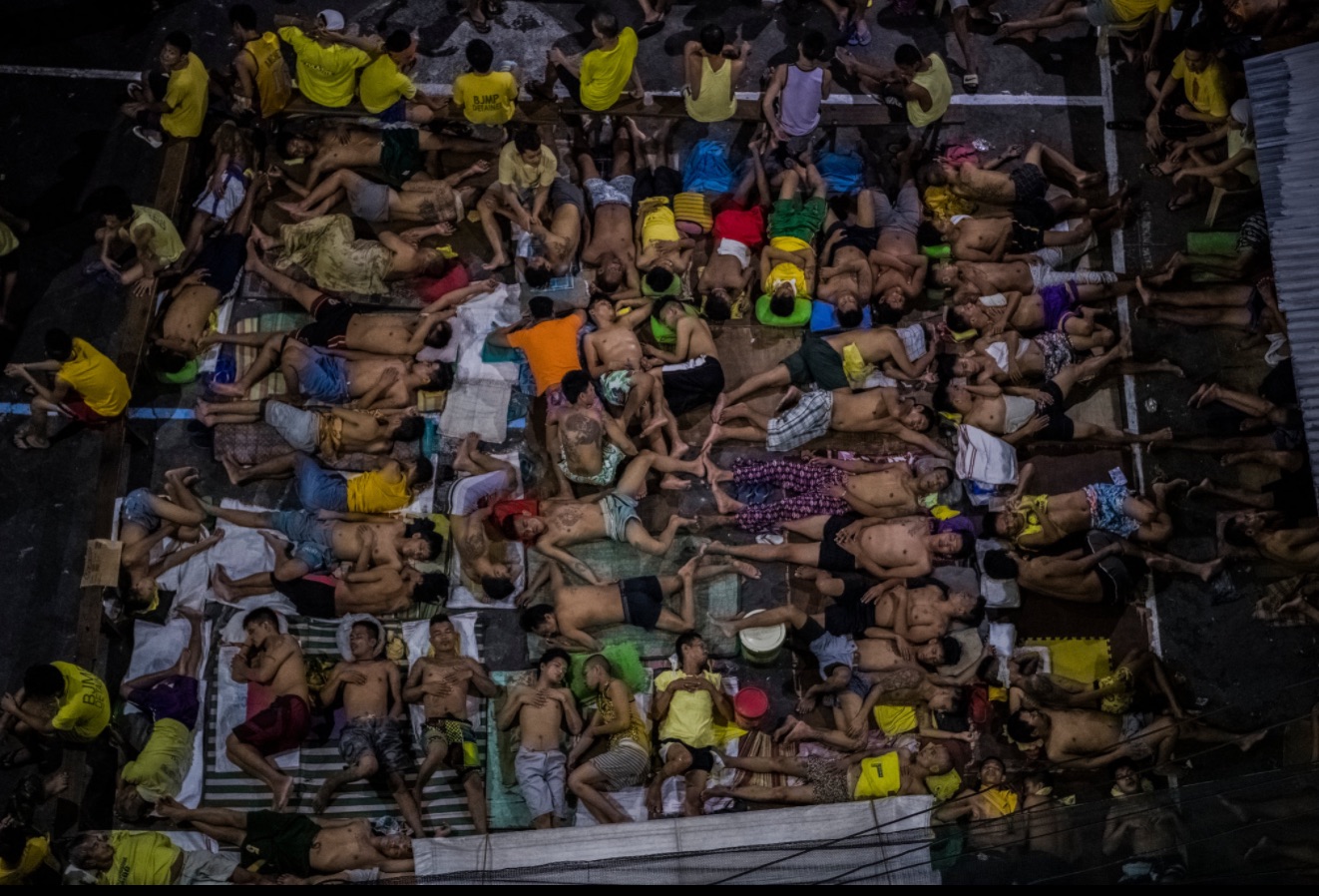 Trump apparently received a multi-million-dollar payment up front for the use of his name and will reap a percentage of the developer’s revenue for some years. Those payments may violate the Constitution’s Emoluments Clause, prohibiting office holders from accepting foreign payments. But why should Trump concern himself about one or another of his flagrant violations of law and custom? Who’s going to stop him? Congress? The Supreme Court?

Trump’s sycophancy toward murderous tyrants is disturbing and aspirational. On April 6 he fired 59 Tomahawk missiles at a Syrian air base, supposedly in response to a Syrian chemical weapons attack that killed 80 people. As dessert was served at Mar-a-Lago, where China’s President Xi Jinping was a guest, Trump announced the Syrian strike in lieu of “after dinner entertainment,” according to his Commerce Secretary. “And it didn’t cost the president anything.” Seven people were killed and nine wounded in the attack.

By flexing U.S. military might, Trump made a quantum leap from his more pedestrian transgressions as a sexual molester, serial liar, debt welcher, tax evader and scofflaw. Media mouths such as Geraldo Rivera and Fareed Zakaria exulted that Trump was at last acting “presidential,” as if killing human beings in far-off lands is all it takes. Trump’s “wag the dog” maneuver also took the focus off confusion at the White House and possible Russian election hacking.

A week later, following this initial success, Trump dropped the largest non-nuclear bomb in the U.S. arsenal (22,000 pounds) in eastern Afghanistan, killing at least 92 people. How many of the victims were civilians is disputed. The mayor of Achin, where the attack took place, questioned the need for such a large-scale strike against a relatively small militant group. But that was not the point. Trump had elevated his tough guy bona fides far beyond his only previous brushes with violence, at the World Wrestling Entertainment matches, as phony as the Don himself. Now the blood was real.

So Trump will be able to dine with Duterte from a position of greater macho parity, and Duterte will acquire a sheen of undeserved respectability. What the after dinner entertainment might be is somewhat scary to contemplate. The only real losers in such a meeting are Americans old-fashioned enough to think their country ought to stand for something beside condoning brutal, lawless dictators and shameless, rapacious greed.

Others betrayed by such a meeting will be the millions of Filipinos bullied and humiliated by their own president, along with the many victims of Dueterte's vigilante violence. But they don't really have a voice. ≈©

JAMES MCENTEER is an American journalist and writer  now living in Quito, Ecuador. His most recent book is Acting Like It Matters: John Malpede and the Los Angeles Poverty Department.

Photographs from The New York Times Pulitzer Prize winning essay, "They Are Slaughtering Us Like Animals", photography and text by Daniel Berehulak.

The Expanding Company of Rogues
Education as a Weapon of Struggle: Rethinking the Parkland Uprising in the Age of Mass Violence
The Green New Deal and 'Accursed Wealth!'
Managing Climate Risk, or Not
Migratory Beings: People, Plants and the Land We Share

Migratory Beings: People, Plants and the Land We Share
Managing Climate Risk, or Not
'The Punishing State' & the Destruction of Civic Literacy
The Decline of Democracy: An interview with David Levine
Keeping Score in the War on the Planet