Finn Lafcadio O’Hanlon: History Puts A Saint In Every Dream

If you were to judge it only by the size of the big crowd that gathered at Berlin’s small but prestigious Whiteconcepts gallery on Wednesday, 28th May, 22-year-old Australian artist Finn Lafcadio O’Hanlon’s first European show was a succes d'éstime. Titled ‘History Puts A Saint In Every Dream’ (derived from the lyric of a Tom Waits song), the show even drew the rare presence of controversial and reclusive German art star, Jonathan Meese, who opened the show with a heartfelt introduction of O’Hanlon and his work.

Roman Catholic saints do combat (both with sword and AK-47) with Aztec-like demons.

From a distance, each of the 16 monochromatic works are as dense as old cartography, but O’Hanlon masterfully controls the stark possibilities of tone and contrast within black and white linework. When viewed against the crisp white walls at the gallery, even the most casual viewer could not resist moving in closer to explore them. The refinement and detail is unexpected in the work of someone so young. These drawings reflect, partly, experiences and observations of a nomadic childhood, wandering with creative parents across the desert south-west of the United States, rural Japan, and the south-east coast of Australia. But underpinning all the works are forms adapted from Romanesque architecture, Renaissance religion art and illuminated manuscripts that the young artist encountered up close for the first time while living in south-west France in 2011.

In these drawings, nothing is sacred. Roman Catholic saints do combat (both with sword and AK-47) with Aztec-like demons, and Aboriginal tribal patterns add texture to excerpts from Buddhist mandalas and decaying drive-in movie signs. Certain pieces, most notably The careless immortal tends her menagerie and Ganesha dances on the cusp of a melancholy doom emulate the classic leaded structure of stained glass windows. Punctuating all the works are snakes and decorated skulls, images derived from Mexico’s Day of the Dead and recalled from yet another childhood road trip.

A keen interest in multi-cultural mythologies and a vivid sense of old-fashioned wonder . . . the artist cites H.G. Wells, Jules Verne and Arthur Conan Doyle as inspirations.

The snakes, which suggest both good and evil, depending on your spiritual perspective, recur throughout these drawings. Exquisitely patterned, inextricably tangled with (and within) other elements, they’re metaphoric pathways on a psychogeographic map, hinting at intellectual and actual routes the artist has followed in these early years of his life. They are as unsettling as they are instructive. 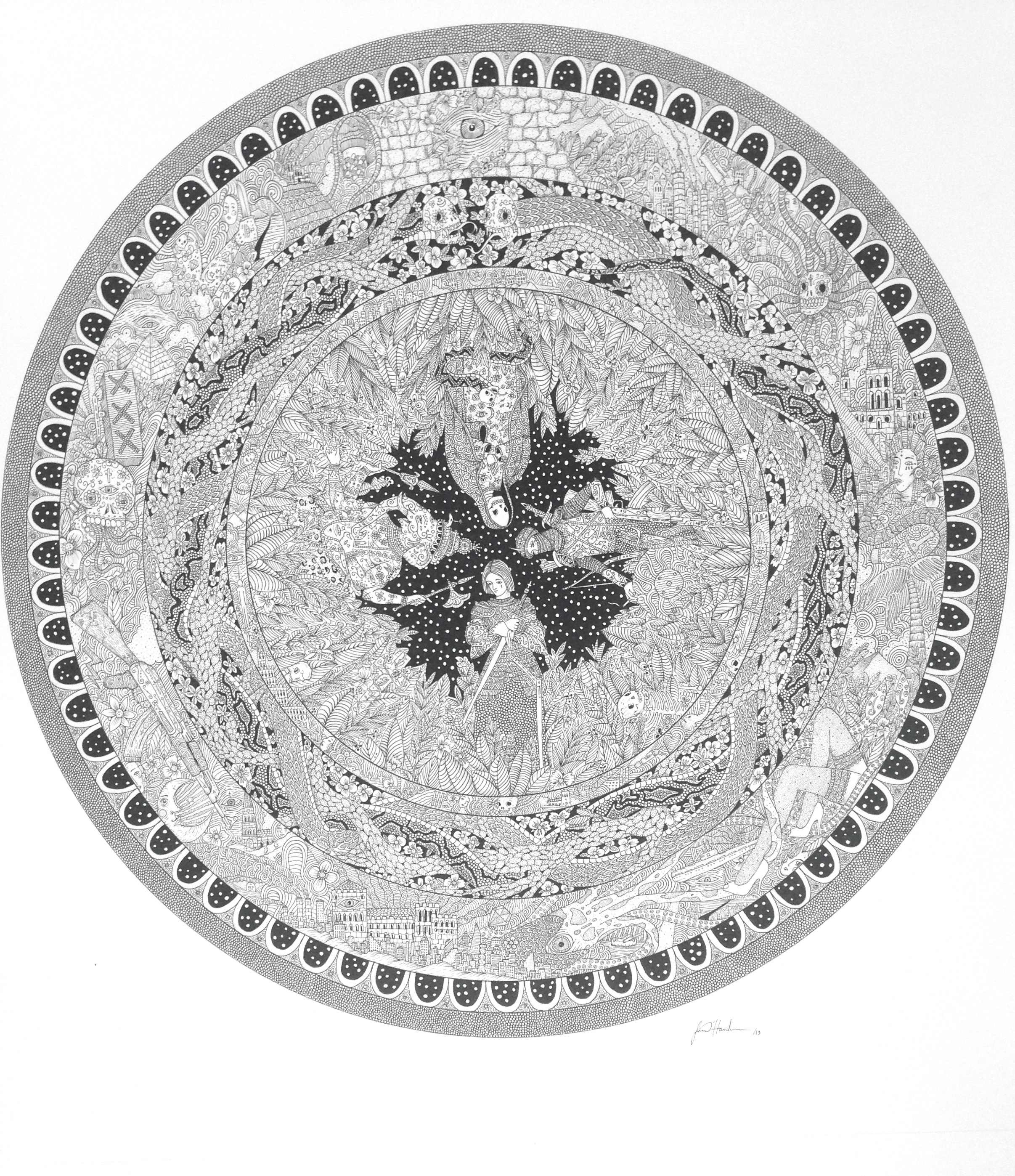 Overall, the images not only reveal fragments of O’Hanlon’s own past. They hint at a depth of historical knowledge, a keen interest in multi-cultural mythologies and a vivid sense of old-fashioned wonder. The artist cites H.G. Wells, Jules Verne and Arthur Conan Doyle as inspirations but the influence of French artist Jean Giraud (Moebius) and even the Gothic illustrators Harry Clarke and Gustave Doré  are unmistakeable.

These drawings are not easy to take in within one viewing. They take time and close-quarters study to decipher and absorb their thought-provoking narratives and meaning. The pure, relentlessly dense  linework create hypnotic puzzles you can’t help but try to unravel.

ILONA CEROWSKA is an emerging Berlin-based writer with a strong interest in contemporary art and photography.