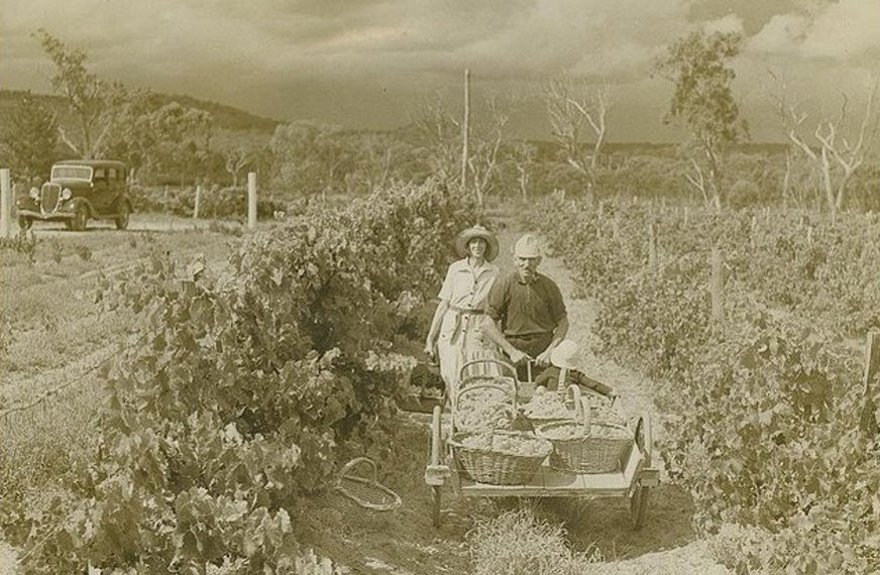 It's a rare treat, this hot little morning of Surrey sunshine. Yet I find myself not outside, strolling the rolling slopes, but deep underground, in the clean cool dark of an English wine cellar. I'm at Denbies – at 265 acres, the largest privately owned vineyard in Europe – to sample one of the eighteen varieties of grape grown on their gentle chalky hills: Bacchus. A grape that in the right hands – such as those of nearby winemakers Chapel Down in Tenterden, Kent – can combine fruit and softly floral aromas with a bracing freshness of finish. I drank Chapel Down's Bacchus on my wedding day. It's a strange one though, Bacchus, with a history that tells us more than we might think – of nature institutionalised and archived, one species grafted onto another, words spliced, and institutions merged and melded.

Bacchus was born in 1933, the creation of famous viticulturist Peter Morio (also responsible for the less self-effacingly named Morio-Muscat) at The Geilweilerhof Institute for Grape Breeding. In attempting to create varieties that were resistant to frost and fungal disease, Morio took a Silvaner Riesling cross and grafted onto it a stem of Müller-Thurgau (itself also a Riesling cross – formed with the addition of Madeleine Royal back in 1882). Due to the Second World War and Germany’s subsequent economic straits, Bacchus was not granted varietal protection and released for general cultivation until 1972, some 40 years later. It’s never been enormously popular in its native country, and in a move that seems strangely circular, incestuous even, it's often blended with Müller-Thurgau to accentuate the flavour of the latter.

Due to its subtly different climate, in the UK, Bacchus is booming. Speaking at an awards ceremony in June 2012, Master of Wine Susan McCraith said: “Once again Bacchus confirms itself as a signature grape variety for English and Welsh wines, capable of showing real concentration and finesse.” It's also increasingly popular in Canada and, according to a 2010 study, is the eighth most planted grape variety in British Columbia. Meanwhile, plantations of Bacchus in its native Germany peaked at 3,500 hectares in1990 but by 2006 were down to 2,113 hectares, or 2.1% of the country's total vineyard surface.

This relative decline of Bacchus in Germany is arguably mirrored by the institution that bore it. The Geilweilerhof Institute is a sub-institute of the Bundesanstalt für Züchtungsforschung an Kulturpflanzen (The Federal Institute for Plant Breeding Research on Crops). Where Bacchus is little known outside of wine circles, the institute is an internationally respected organisation with experimental stations in three different areas in Germany, a seed archive of over 15,000 varieties of grape, and a vast species database, called the Vitis International Variety Catalogue, freely accessible online since 1996.

And yet in January 2008, the Institute's parent organisation was fused with two others (the Bundesforschungsanstalt für Landwirtschaft and the Biologische Bundesanstalt für Land und Forstwirtschaft) to form the brand new Julius Kühn-Institut Bundesanstalt für Kulturpflanzen. Just as Bacchus was born from a complex union of multiple parents, so too the Bundesanstalt. And just as Bacchus was later blended with its parent grape, so the Bundesanstalt's parent organisation was forcibly blended with another. The result? A fusion of complex remits and subdivisions, departments, histories, strategies and, of course, some characteristically clunky, German etymologies.

So we have 'bundesanstalt' – literally, an institution involving a bond or union, in short, a federal agency; 'forstwirtschaft' – the economy or business of forests, ie forestry; and 'kulturpflanzen' – the culture or cultivation of plants, ie agriculture or crops. Incidentally, did you know that colo – the Latin verb from which we get the word culture – means not only to cultivate and to till but also to worship? Bacchus suddenly seems like a very good name for a variety of grape...

Even more so if we then think of the similarity between the grape's creation and the artificial births of all these compound neologisms. In an unregulated environment, both life and language undergo their changes slowly over time, a random mutation failing or prevailing depending on its suitability to an external environment. But in an institutional context, creation is a moment of supreme control. The artificially created Bacchus withstands fungus and frost; likewise, state-sponsored terminology like 'bundesanstalt' seeks to convey a similar level of solidity and institutional strength.

And yet such control can only operate up to a point. Just as Bacchus has only achieved its potential in contexts and climates unconsidered by Peter Morio, so German's clunky municipal compounds are subjected to heavy pruning by the general populace. As Hamburg-based journalist and linguist Brian Melican explains: “Take 'Solidaritätszuschlag', for example, the infamous tax on high earnings for reconstruction of the GDR: most Germans simply call it the 'Soli'. Another favourite is the 'Verpflegungsmehraufwendungstagespauschale', which in English would probably be 'per diem allowance for expenses while travelling'. My tax advisor simply calls it the "Pauschale" and relies on context.”

Back to Denbies and this kind of spliced identity creates similarly unwieldy results. The company's income is split 50/50 between tourism and wine sales, with the latter aimed primarily at the larger supermarkets, for whom consistency is more important than quality. At the vineyard, the visitor centre dominates, with groups of retirees guzzling scones and buying trinkets. Outside, a Land Rover drags carts of tourists up a hill, and down again, music blaring out across a patch of woodland. “The ice age is coming, the sun is zooming in. Engines stop running and the wheat is growing thin.”

It's a strange old mix. Economics and ecology; government and etymology; The Clash. Bacchus and its institutions continue to involve these convoluted conjunctions: a repeated intermingling to perfect an aroma. What are we left with? A marriage of ideas perhaps; a study of words in words, out of which, somehow, some truth will spring. A science? A history? Or simply something to sup on...