How the Right to Assembly Gets Fudged

Category
Dissent
Movements & Communities
Politics & Power
How the Right to Assembly Gets Fudged
by Fred Fiske
Published: Sep 25, 2014
Standfirst
New York City Mayor Bill DiBlasio’s balanced assessment of his police force and their climate march arrests may sound like Solomon. But his expressions of sympathy, flexibility and restraint are inadequate strategies for defending the constitutional right of assembly.
Body

NEW YORK — More than 100 demonstrators were arrested during the recent Flood Wall Street rally in New York City on Monday, which may seem like a small number, given the 100,000 peaceful protesters who turned out. The questions for me are: Why was there even one arrest during this nonviolent expression of a right explicitly guaranteed by the U.S. Constitution? And, what were the 'crimes' committed that warranted such a reaction from the police?

No doubt some of the charges were like those filed against the more than 3,500 people taken into custody during the Occupy encampments that began in New York three years ago and spread to cities around the world. Those charges included: disorderly conduct; resisting arrest; obstruction of government administration; unlawful entry; trespassing; resisting and delaying officers in the performance of their duties; failure to disperse; obstructing a public highway; assaulting a police officer. At least two New York protesters were arrested for wearing a bandana — a statute left over from the 19th century, meant to deter brigands and highwaymen.

All of these charges are, in this context, manipulations of the justice system to constrain a crowd. These charges were invoked to justify arbitrary and almost casual encroachments on the constitutional right to assemble.

The First Amendment is not arbitrary at all: "Congress shall make no law … abridging … the right of the people peaceably to assemble, and to petition the government for a redress of grievances." 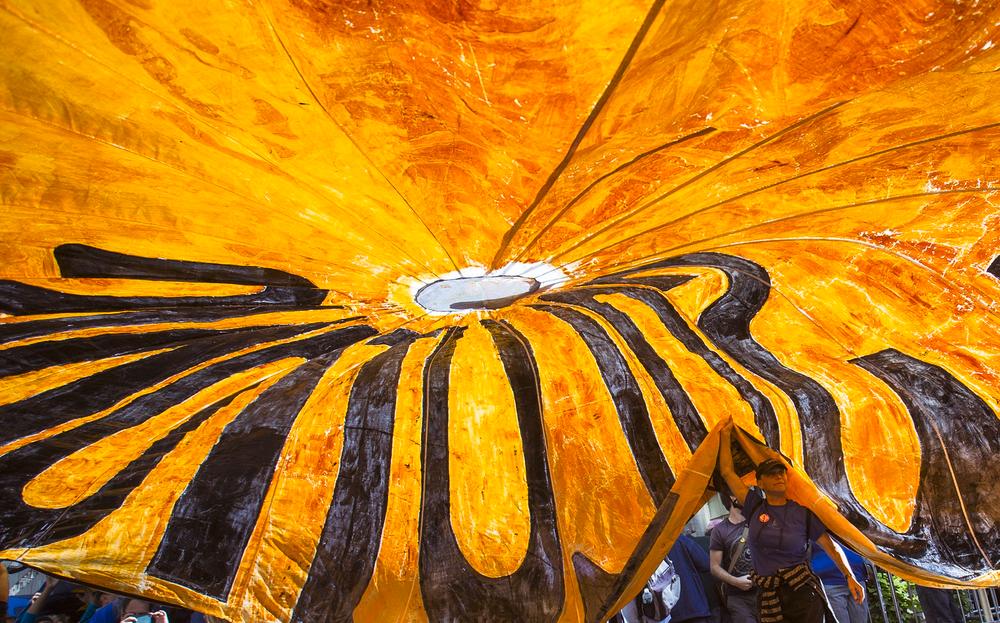 Large props added a stirring effect to the marches in Uptown and Wall Street in New York. Photo credit.

The People's Climate March, held the day before the Flood Wall Street rally, attracted 310,000 participants [in these pages, see Heating Up: Climate Passion on the March]. It was a peaceable, if sometimes rambunctiously joyful, assembly. There were no reports of police officers or innocents threatened or harmed. Come to think of it, since the Occupy phenomenon emerged in the fall of 2011, there have been no major incidents: a remarkable example of sustained, resourceful protest in challenging circumstances. The self-discipline, principled resistance, resourcefulness and sheer stamina of the protesters stands as a model of nonviolent action.

Yet thousands of principled demonstrators, expressing themselves in a way that is explicitly protected by the U.S. Constitution, were unceremoniously pushed and shoved to the ground, wrists bound painfully tight by plastic handcuffs and carted off to be booked for their 'crimes'.

Reacting to questions about the arrests during the climate march, New York Mayor Bill DiBlasio offered what appeared to be a reasoned, even sympathetic, defense of the demonstrators. "The issue is one of tremendous urgency," he said. "[These] are the kind of issues that bring out incredibly strong passions, and they should. This is about the survival of the Earth."

He also offered a strong defense of the police response, saying: "I thought the NYPD did a fantastic job allowing the protesters to make their point, but handling the situation with a lot of flexibility and restraint. And it ended up, obviously, with very few arrests and very little conflict."

Tourists thronged around the iconic sculpture, but when the Occupy protesters arrived, metal barricades closed off access to the Bull.

Asked about the disruptions and inconvenience imposed on others by the weekend’s massive demonstrations, the mayor replied: "I think the First Amendment is more important than traffic. The right of the people to make their voices heard, regardless of their views, is a fundamental American value. And we’ll protect that value."

He also said the arrested protesters got what they asked for. "We had a situation where it was civil disobedience as it’s supposed to be, meaning it was peaceful," he said. "Those who really wanted to get arrested got arrested. That was their choice. They were given every opportunity to not get arrested, but they chose to."

The mayor’s balanced rationale may sound as wise as Solomon, but it amounts to a 'reasonable' justification for violating the Constitution. How does the mayor know all those arrested protesters 'wanted' to be arrested and manhandled by police? How does he know each case represented civil disobedience "as it’s supposed to be?" Some of the demonstrators apparently chose to express themselves in a way that the police (and by extension, the mayor) deemed inappropriate, disruptive, dangerous, illegal — crossing an arbitrary line they had drawn. 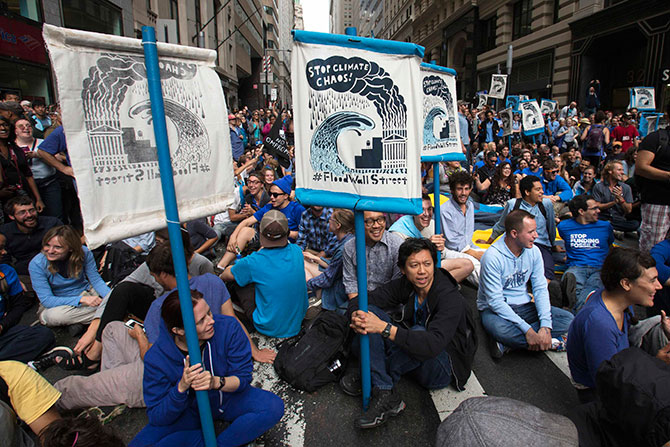 Banners and placards demonstrated the creativity and frequent eloquence of the participants. Photo credit.

A few years back, at the Republican national convention in New York City at which protest rallies were allowed — at a site well out of earshot of the convention hall — there was no conflict with protesters and conventioneers. The visiting Republicans would not have to endure the rude remarks of the protesters. It may have been seen as a prudent precaution to prevent disorder, but the protesters literally were denied the right to be heard.

Or, consider a minor episode that occurred days before the climate march, during the third-anniversary of the Occupy rally at Zuccotti Park, last week on September 17. Among events planned was a theatrical event, 'The Sacrifice to the Bull.' It reportedly involved the ritual 'sacrifice' of plastic mannikins placed in front of a giant metal Charging Bull, on Broadway near Wall Street. Earlier in the day, tourists thronged around the iconic sculpture, but when the Occupy protesters arrived, metal barricades closed off access to the Bull. The leader of the action tried to explain to police the harmless nature of this symbolic protest, but was met with stony silence. Of course, demonstrators were 'free' to cross the barricade — and be arrested for trespassing, unlawful entry, disorderly conduct or whatever. And, if they were wearing bandanas, that charge would still be available to the law enforcers.

When people are so upset at their government’s policies that they set aside their daily tasks and personal concerns and take to the streets in protest, they must be allowed to do so.

As it turned out, none of the protesters decided to cross the line. It just didn’t seem worth it to be arrested for trying to pull off a theatrical stunt. Instead, the event leader gave a short speech and the discouraged demonstrators shuffled back to Zuccotti Park. No big deal, you say? Perhaps. But in a small way, it represented once again the arbitrary denial of the people’s right to assemble: a constitutional violation. For what purpose?

Mayor DiBlasio’s response to the climate protest arrests sounds reasonable enough. But what it amounts to is a 'reasonable' excuse for abridging a constitutional right.

The mayor generously praised the police for 'allowing the protesters to make their point.' But this is not something police have the authority to 'allow' in the first place. At some points during the climate protest, they stopped 'allowing' protesters to carry on and slapped on the handcuffs. In doing so, they demonstrated that 'flexibility' and 'restraint' are not adequate strategies for defending a precious right. If a police officer was inclined to be a little 'inflexible' and 'unrestrained,' the line of tolerance could get blurry indeed. 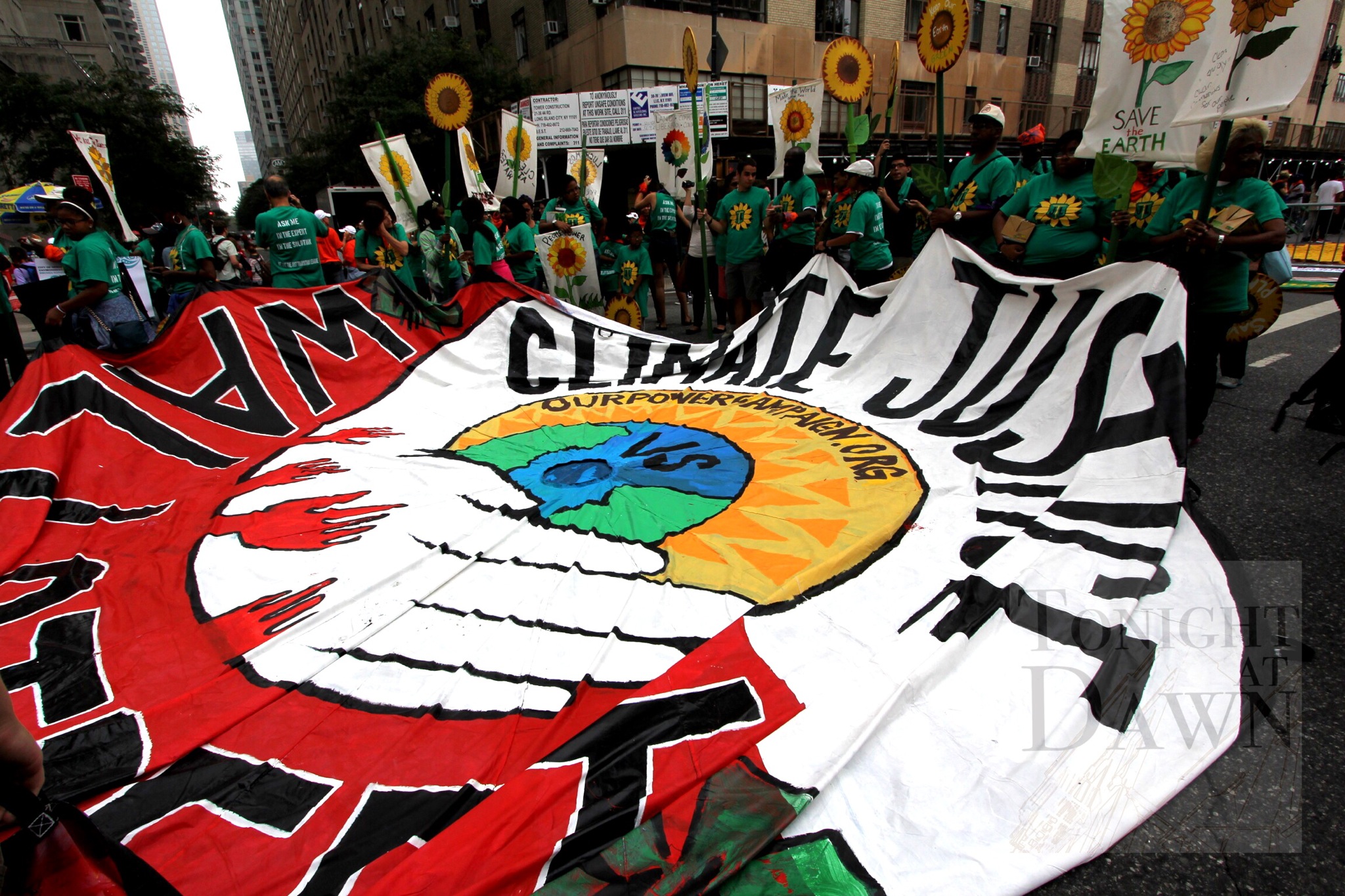 To be sure, a massive rally presents challenges to authorities, just as the Occupy movement did. Nowadays it seems that threats to security are everywhere — from terrorists, fanatics, even disease. Unscripted events can be a nightmare for those whose job it is to uphold the law, protect citizens, and ensure everyone’s rights to be secure in their daily lives. And New York’s seasoned police force has seen it all.

But constitutional rights are not subject to encroachment. Why is this one? The right to practice the religious faith of your choice does not require prior government approval, permits, or obedience to arbitrary rules. The press is free, which means that government cannot impose prior restraint or dictate what is or is not published. But when it comes to assembly, governments at all levels act as though they are entitled to dictate as many rules as they choose to circumscribe, or even prevent, the expression of that right.

AMENDMENT I: Congress shall make no law respecting an establishment of religion, or prohibiting the free exercise thereof; or abridging the freedom of speech, or of the press; or the right of the people peaceably to assemble, and to petition the government for a redress of grievances.

As Mayor DiBlasio said, protests can create inconvenience. At some undefined point, inconvenience becomes grounds for denying the right to protest. But isn’t it the job of government to protect that right, which the Constitution deems absolute? Instead of dreaming up arbitrary rules to tame or muzzle the protesters, shouldn’t authorities focus on ways to minimize the inconvenience to others — by 'flexibly' rerouting traffic, say, instead of blocking, containing and arresting protesters? Hey, Hizzoner himself said the First Amendment is more important than traffic. So take off the fetters.

Democracy is messy. When people are so upset at their government’s policies that they set aside their daily tasks and personal concerns and take to the streets in protest, they must be allowed to do so. And Congress, as well as New York City, should make no law  abridging that right. If it gets inconvenient for others, keep this in mind: the protesters aren’t just doing it for themselves. As one sign read: 'We are here so you don’t have to be.' 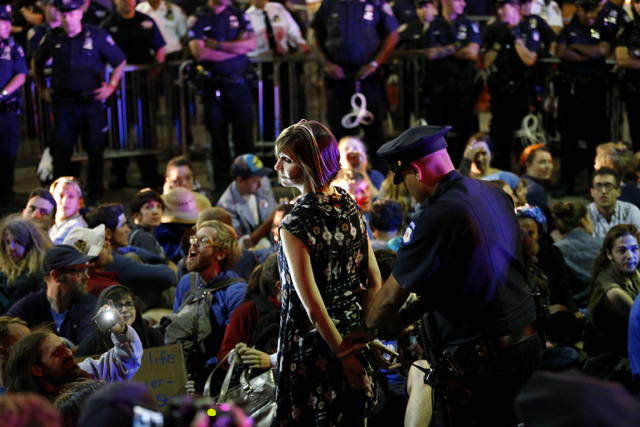 Protester being cuffed on the night of the Flood Wall Street march.

How the Right to Assembly Gets Fudged
Interview with a Revolutionary: A Survivor of a Bolivian Massacre Tells (Almost) All
A Revolutionary Moment: Morsels of Insight from Chris Hedges' Wages of Rebellion
Young people seeing their power
How to Go Sane Under a Post-Truth 'n' Tweetin' Commander-in-Chief

A Revolutionary Moment: Morsels of Insight from Chris Hedges' Wages of Rebellion
Young people seeing their power
How to Go Sane Under a Post-Truth 'n' Tweetin' Commander-in-Chief
For the love of Egypt
Tear Gas and Rainbows: Citizen Protest & Resistance in Turkey