I Can Haz Toxoplasmosis? 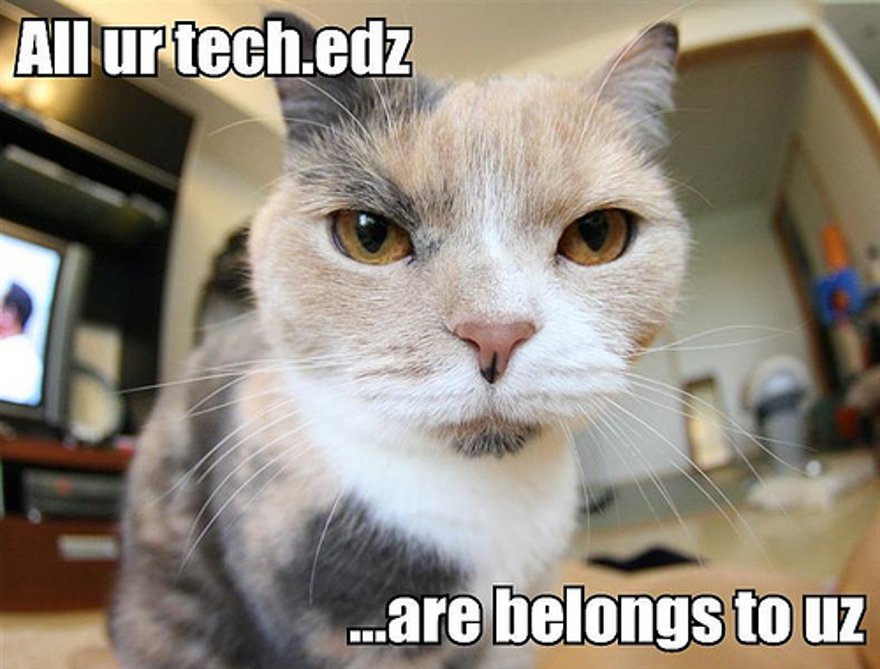 Cats have won the internet. Of that there can be little doubt. Supposedly tame, they roam the web as if it was your neighbour’s garden. And yet, appropriately enough perhaps, the most viral of animals on the internet carry a sanity-threatening bacteria. So they are perfect ambassadors for networked computers (which can in turn lead to obsession and, yes, psychosis). Indeed, cats and the web go together like LSD and cream, but what can we possibly learn from this?

Imagine, if you will, that an evil developer were to design a machine to enslave and madden. They could not have done better than the one whereby you can read this piece online. Common delusions like surveillance and telepathy are manifested by, say, your digital footprint or the stranger's thoughts which pour into your Twitter feed. If two hundred years ago you were the type to complain that God or the Devil was controlling you, it's now obvious to blame technology for a similar offence.

The web is a breeding ground for extreme viewpoints, many of which are just barmy.

To make matters worse, the web is a breeding ground for extreme viewpoints, many of which are just barmy. Or are they? Just take the reported phenomenon that is gang stalking: a community of folk who believe themselves followed by government-funded spy rings has sprung up for mutual support. Already in 2008 gangstalkingworld.com had more than 71,000 visitors and Harrassment101.com was looking at almost 1,000 forum posts. In their report on this phenomenon, the New York Times quotes Dr Ken Duckworth, medical director of the US National Alliance on Mental Illness, who says: “The Internet isn’t a cause of mental illness, it’s a complicating new variable.”

But as far back as 1994, psychiatrists in the US came across cases such as Mr D, a 27-year old male who “believed his life was controlled by the internet”. According to Mr D, his neighbours were putting information about him online; the sites he went to were filled with ‘double-talk’; and he believed that would-be girlfriends, all met online, were plotting to kill him. In such cases, there’s not much difference between a virtual reality and a loss of touch with concrete reality. 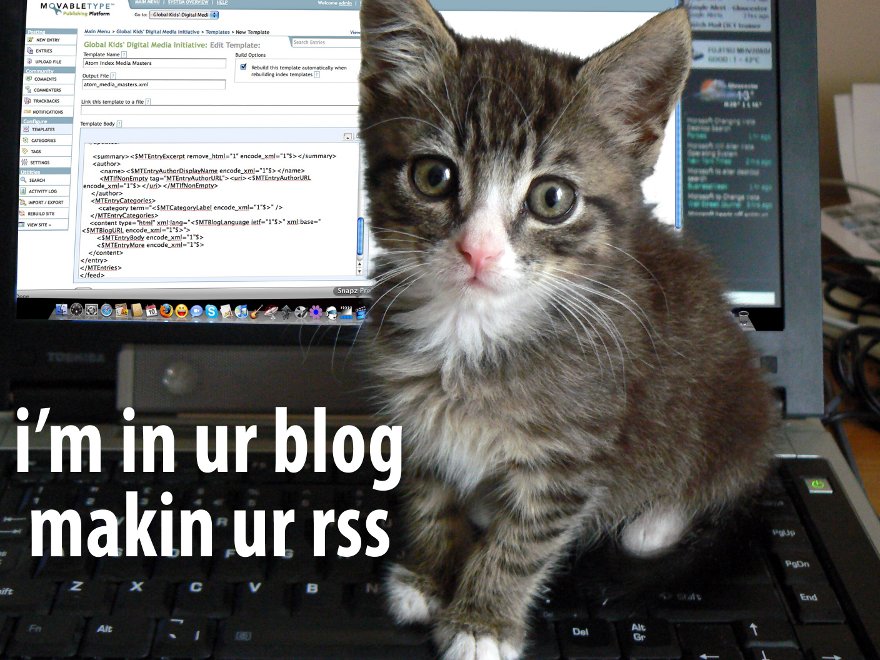 Novelist Will Self is one of those concerned with how much life is virtual these days. In a short film for English National Opera, he mentions the violent and sexual urges in our “so-called” unconscious, yet adds, “We know absolutely what the difference is between that and the world of social codes.” If you don’t know this, you are insane. But with video games and immersive websites: “Here you have an arena you can interact with which is inherently psychotic.” Activities online have “the same kind of ontological status; they're equally real.”

Schizophrenia may be infectious and it is your favourite household pet which carries the bacteria.

Fishing around for hard evidence of this, you might come across recent news pieces pointing to three psychotic online daters in Israel, or two dozen hysterical Facebook users in New England. Such tales, surely the tip of the iceberg, fail to make much of a splash. But what does go, ahem, viral is the evidence that schizophrenia may be infectious and it is your favourite household pet which carries the bacteria.

Toxoplasma gondii, which can be picked up from a litter tray near you, is said to rewire your brain and accelerate the production of psychogenic dopamine. Some have even claimed that T. Gondii alters brain chemistry in the same way as LSD. Your grey matter could even be eaten away. No wonder The Independent sounds alarm bells: “A parasite spread by cats is infecting 1,000 new people every day in Britain – about 350,000 a year”.

Nature magazine takes a calmer approach, calling the microbe: “a single-celled pathogen that infects most types of mammal and bird, causing a disease called toxoplasmosis.” It also suggests why cats may have teamed up with T.gondii: “Its effects on rodents are unique; most flee cat odour, but infected ones are mildly attracted to it.” 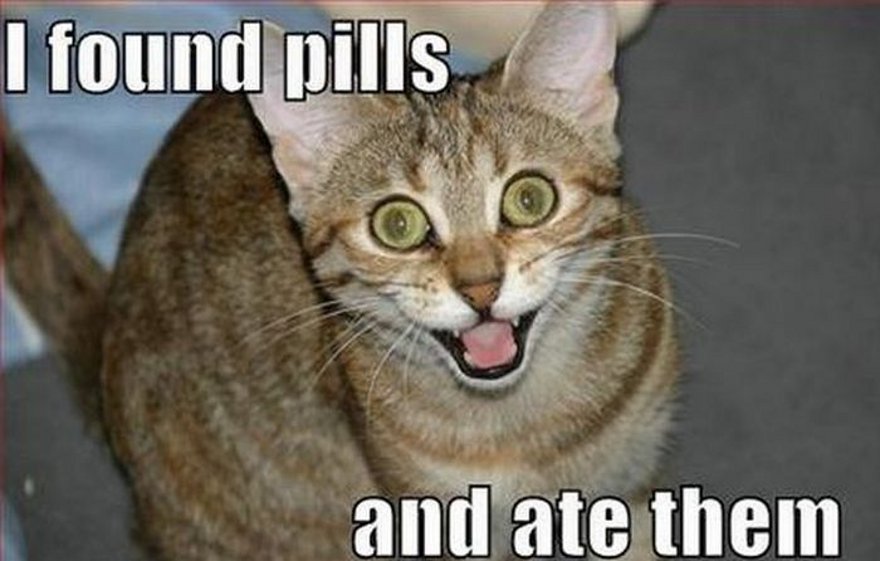 What is even more interesting is that, according to psychiatrist E. Fuller Torrey (h/t to the Atlantic): “Schizophrenia did not rise in prevalence until the latter half of the 18th century, when for the first time people in Paris and London started keeping cats as pets.” And those domesticating our feline friends were mostly “poets and left-wing avant-garde Greenwich Village types.” In other words, these early cat lovers were primed for insanity.

In Victorian England, cats were still generally used to control mice and rats. “When I was young,” said famous cat artist Louis Wain, “no public man would have dared acknowledge himself a cat enthusiast; now even MPs can do so without danger of being laughed at.” Wain may have been instrumental in bringing Britain’s cats indoors; it might also be said that his feline friends drove him out of his mind.

There are two sides to the tragic figure of Wain. On one he is the wildly popular painter and illustrator who did so much to anthropomorphise cats as Edwardian gentlemen. On the other side he is the forgotten inmate of many a psychiatric ward, including Bethlam. During this time his cats took on a markedly psychedelic air and many say the degeneration of his mind can be seen in the hallucinatory vividness of his later art.

According to artbook.com: “In its weakness for the cute, the twenty-first century shares characteristics with the end of the nineteenth.” Whereas schizlife.com, a site about living with schizophrenia, points out that among Wain’s delusions there was a fear of electronics. Needless to say, as both cat lover and visionary, Wain is all over the interwebz. Could or should his life provide a cautionary tale for our times? Many suggest he had toxoplasmosis.

You might think that cat lovers in the 21st century have tipped over the edge. There’s feline worship online to put ancient Egyptians to shame. The internet is, if nowt else, a cat proliferating machine. Just open a site like thebestpictureontheinternet.com to get some idea of the madness of this trend. And there is little doubt that Louis Wain, and the rest of the Edwardians by extension, might have enjoyed a partial understanding of our present day obsession with ironic cats. 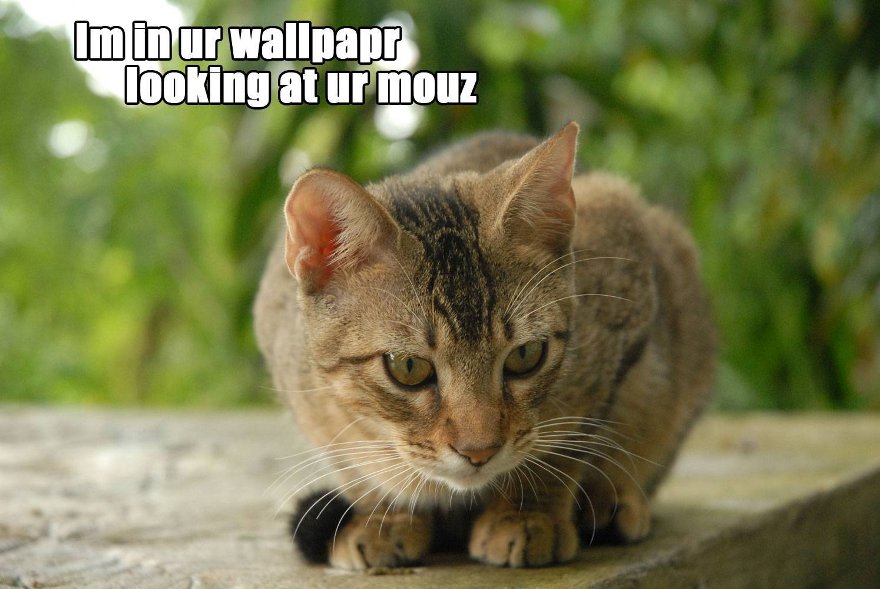 There’s an excellent piece on PBS which demonstrates that cats run the internet, and indeed much has been written about this elsewhere. Suffice for me to simply recap: Ben Huh of the popular Cheezburger Network has said that cat pictures outnumber those of dogs 10 to one. Cat vids have their own art festival, which last year in Minneapolis drew crowds of 10,000. While a spokesperson for Buzzfeed said that views of viral cat clips get on average 9,000 as opposed to 5,000 for dogs.

In the name of balance, it is elsewhere pointed out that dogs generate more Google searches. But let us also consider that dogs are already considered funny, whilst cats are not. We laugh at cats at our peril. Cat laughter is something like the hollow chuckle of a toxoplasmosis victim in the smoking room at his or her nearest good mental asylum.

Cats have come indoors. T. Gondii could get you locked up.

With those hilarious memes front of mind, there is little left to say about the unholy trinity of cats, the web, and schizophrenia. Cats have come indoors. T. Gondii could get you locked up. And online, there are plenty of places where you can share your delusions. Whether or not cats can drive you mad, their virtual abundance is surely a symptom of the madness of 21st century life, as Louis Wain once represented the madness of the 19th and 20th.

Psychotic illness takes many forms and schizophrenia is only one. But it is the form connected with felines and, I also believe, the web. Schizophrenics suffer delusions of connections and networks where none exist. Or perhaps the connections come to exist, but only online. These bridges, or networks, where once there were gaps, are, according to Georges Bataille, inherently schizogenic: “I can thence grasp the unbreakable chain between all beings formed of these moments of continuity...not with an abstract concept but rather in moments of comic subversion”. He might well have been discussing LOLCats...


Mark Sheerin is an art writer from the UK. He acontributes to Culture24, Hyperallergic, and Frame & Reference, among others, as well as his own personal blog, Criticismism. In 2012 he appeared in Nature, a volume in the series Documents of Contemporary Art from Whitechapel/MIT. He tweets @criticismism
www.criticismism.com