Category
Philosophy & Ethics
Politics & Power
Spoiled Worlds
The Normalization Of Mega-risk
by Craig K. Comstock
Published: Sep 10, 2017
Standfirst
The political art of saber-rattling is an act (or acting out) designed, like an aggressive chess move, to unsettle the opponent. It can be innocent enough, and yet, when the stakes are as they are in the current situation with North Korea, the possibility of technical errors, miscalculations and misunderstandings become a very serious danger. As Craig Comstock points out, such missteps almost happened.
Body

George C. Scott, as General Buck Turgidson in Dr. Strangelove: Or How I Learned to Stop Worrying and Love the Bomb (1964).

ASHLAND, OREGON — There is no such thing as all-out nuclear war. That is because the concept of “war” applies properly only to adventures against non-nuclear countries (such as North Korea in the Fifties, Vietnam, Afghanistan, Iraq) or to major powers before Hiroshima, certainly not to the world in which ICBMs are loaded with independently targeted hydrogen warheads. If a nuclear exchange ever occurred, the result would be best described not as a “war,” but as a rapid and widespread slaughter on an unprecedented scale.

In the film, The Fog of War, Robert McNamara, John F. Kennedy’s Secretary of Defense, is speechless for a while in trying to talk about the Cuban Missile Crisis, then mentions there were three other occasions when a nuclear exchange nearly happened. Cold War tensions rose and fell, but let’s do the math to obtain, by extension, a very rough estimate of similarly dangerous incidents.

The system of mutual threats seems to work, or has worked so far.

As reported in the documentary film, McNamara served for seven years (1961-67), and knew of four occasions when a nuclear exchange almost occurred. Say the worst of the Cold War extended from 1953 (first Soviet test of a hydrogen bomb) to 1989 (thought to be the end of the Cold War); that is 36 years, of which McNamara’s term was around 20% of the time. If 20% of the era included four times of great nuclear danger, then 100% would bring the total up to 20. And of course the danger remained after 1989, in that both the U.S. and Russia could still destroy each other, as they still can. So the estimate is conservative. Do we really want a system that may have nearly led to the end of civilization at least 20 times? (Kennedy’s “flexible response” policy may have reduced the danger, but did not obviate it.)

We humans react to immediate threats, but are not very good at dealing with threats thought to be improbable (such as nuclear war) or far-off (climate change). Even if the event would be devastating, we hesitate to react if the probability seems extremely low. The age of nuclear weapons began in 1945 and thus has gone on for more than seventy years without a nuclear weapon being used against an enemy, at least after Hiroshima and Nagasaki. The system of mutual threats seems to work, or has worked so far.

These two dangers (nuclear war and climate change) share some characteristics. In each instance a powerful economic interest is involved: in the case of climate, the fossil fuel purveyors (and users), and in the case of the nuclear system, what Eisenhower called the military-industrial complex.

Second, the danger is also largely hidden in each case: greenhouse gases are invisible, and the missiles are underground or under the sea. Third, the danger is so extreme as to be unimaginable to many: in the case of climate change, some scientists worry that it could even cause “near term human extinction,” and in the case of the nuclear system, the sudden killing of hundreds of millions (and the corresponding destruction of things). Fourth, our governing systems seem insufficient to the task. For example, the Paris Accord on climate change is insufficient (in terms of promises made), non-binding (if promises are not kept), and has been denounced as unnecessary by the current U.S. regime. 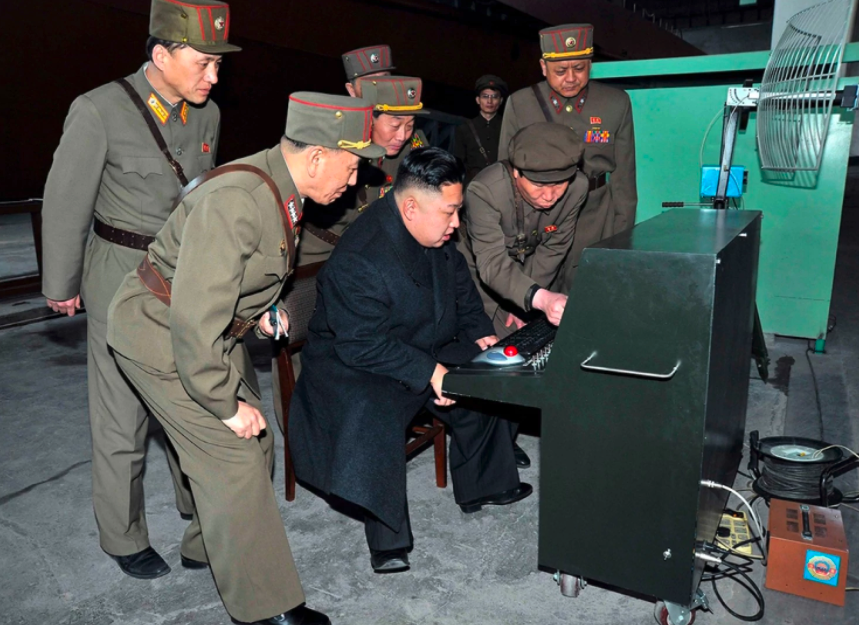 In this brief article, I want to focus on the nuclear system, and suggest the need for prompt and drastic change. As revealed by Lawrence S. Wittner in his book Confronting the Bomb, a history of the peace movement, this need was obvious to many scientists and to some policy-makers right after the end of the war with Japan. Many people realized that we were in a new era, that old ways of thinking were dangerous.

At that time the favored solution in the peace movement was to put nuclear materials under an international body. The U.S. government came up with the Acheson-Lilienthal plan and the Baruch plan. But neither of these plans was adopted. Hydrogen bombs and the missiles to “deliver” them became normal. Surely nobody would be foolish enough to “strike,” if they knew they’d soon be destroyed.

I recall a seminar in Cambridge (Massachusetts) run by Henry Kissinger, when he was still a professor. His guest one day was Herman Kahn, visiting from the RAND Corporation. A man of darkly lambent wit, Kahn presented ideas based on perfect knowledge and rationality. Along with Kissinger, who had written about “limited” nuclear war, a member of the faculty was Thomas Schelling, a brilliant game theorist. One trouble was, the world is a set of rational games until it isn’t, until there’s an accident, a miscalculation, a system that gets out of hand.

Nuclear weapons have been normalized, as if they were just another weapon. We have gone nearly three-quarters of a century without an “exchange,” actually without a single nuclear bomb “delivered” to an enemy, which allows many observers to ignore the continuing risk. We humans don’t do very well with a danger that would be enormous but the possibility of which seems tiny. The argument is that, if we took the situation seriously, we’d worry about everything. However, not everything can wreck civilization in a day. We also tend to think that something so horrible couldn’t possibly occur. It would make no sense. That is what statesmen thought just before the Great War that began in 1914.

The game did include a nuclear attack on the USSR, but only in a script, not in actuality.

In Moscow in 1986 I heard about a terrifying nuclear secret from a Russian who was at Khrushchev’s elbow during the Cuban Missile Crisis. (Follow the link if you’re interested.) Here I want to focus on another near-disaster caused by paranoia at the top of the Soviet government during the NATO war games called Able Archer, in 1983. This was shortly before Gorbachev took over as General Secretary. I have suggested that his radical change of foreign policy was influenced by the near-disaster that he witnessed in 1983 as a member of the Politboro and as an aide to Andropov.

Here’s what happened: Andropov got the idea that NATO might be intending to launch a surprise nuclear attack under cover of an annual war game, and thus he tasked the KGB to provide “indicators” of Western preparations for this attack. Many indicators were discovered. Unlike the Cuban Missile Crisis, which was two-sided, the U.S. was planning no attack and unaware of Andropov’s suspicions.

In my experience, many people have not even heard of what happened in 1983. The game did include a nuclear attack on the USSR, but only in a script, not in actuality. According to the U.S. President’s Foreign Intelligence Advisory Board, in a secret report declassified through the efforts of Nate Jones, the nuclear forces of the Soviet Union were on a “hair trigger,” while the U.S. didn’t even know about the danger. (At the end of this article, those who wish to learn more about the Soviet reaction to Able Archer 83 will find a list of sources.)

The danger has not gone unnoticed. So far, thoughtful and persistent people have sought to respond by limiting the testing of nuclear devices, by toning down bellicose rhetoric (as in JFK’s 1963 speech at American University), by reducing the number of warheads and “delivery” vehicles, by limiting themselves to proxy wars and avoiding direct conflict with our great rival, by installing a “hot line, by requiring notifications about “war games,” and the like. However, they have not dealt with the system of mutual nuclear threats. 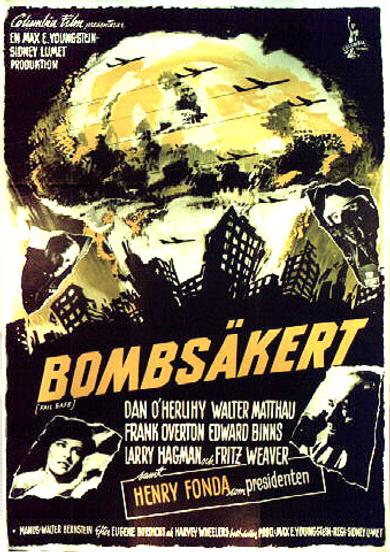 Swedish poster for the movie Failsafe (1964).

In the Reykjavik summit in 1983 between Gorbachev and Reagan, the leaders even briefly discussed nuclear abolition, until Reagan insisted on his country’s right to test an anti-ballistic missile system. He did not seem to realize that preventing retaliation, if it were possible, would threaten the other side.

This system of mutual threats has the quality of serving very well unless it causes a catastrophe that is, however, thought to be improbable. The system also deals with the disparity between the number of NATO troops and those of their neighbors to the east. And whatever worries people may have about the present system, they do not need to worry about the other side hiding a warhead (or more than one).

The problem is the risk of one side launching a pre-emptive strike, because, for example, it has a new weapon or makes a mistake (as during Able Archer 83), or gets involved in an escalation that can’t be stopped. Meanwhile, we are misled by the long period of no nuclear exchange, rather than focusing on the terrible risk as indicated by the near-disasters.

Long ago, the situation slipped into normality. ≈ç 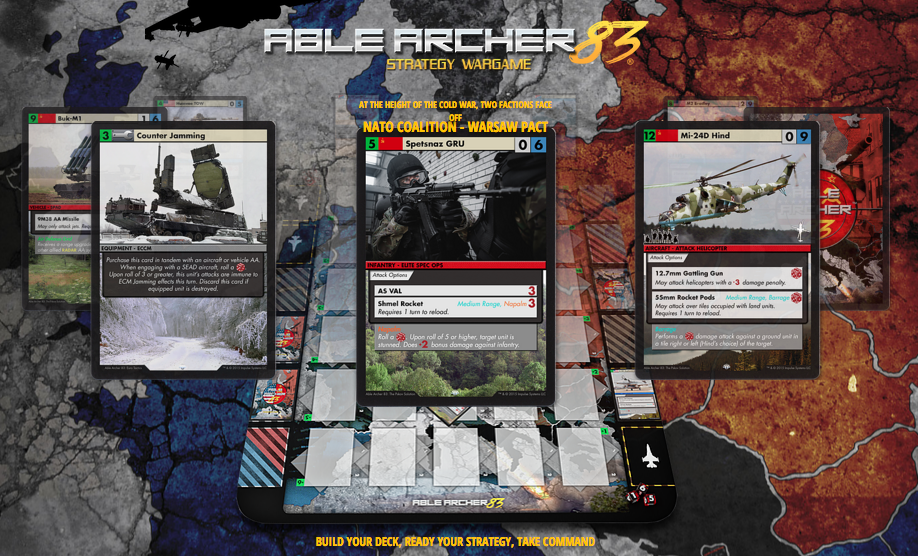 For readers interested in learning more about Able Archer 83, here are a few articles:

In addition, see writings by Fischer for the CIA (2008), Jones for the National Security Archive, Birch in The Atlantic Monthly, and Doward in The Guardian (all three in 2013), Hoffman in The Washington Post (2015), Barrass for the International Institute for Strategic Studies (2016).

This article was first published in Huffington Post on August 28, 2017. Published with permission from the author.

The Normalization Of Mega-risk
What Privately Nags at Trump
Anarchist Anthropology: Power with Hierarchy
Durable Goods: Past & future from the centre of now
Guns in the Wrong Hands: One Country's Solution