I begin this epistle in the belly of the beast where I reside temporarily and observantly: a bar next to the Air Canada Centre, the hockey arena in Toronto. A place where the Internet password is GOLEAFS, for the local hockey team which has not tasted championship suds since 1967; a place with fruit flies in a Toronto February; a place where a glass of mediocre Malbec costs $17.50 (Cdn); where fish with the consistency of leather served on what appears to be kernels of canned corn is considered nouveau cuisine; where the occasional classic R&B tunes are assaulted with an appalling synthesized rhythm track while the rest of the music seems fit for a tacky club; where uncomfortable looking young women in hot pants struggle with their food trays while small groups of young men sit together wearing their Toronto Maple Leaf paraphernalia. Even in the early evening it is a place with flashing lighting suitable for a suburban peelers’ bar. This is the epicentre of my world class-my ass city. Ahhhh, the colonies. I digress.

My true purpose is to discuss hockey. On the eve of the men's hockey game final game at the Sochi Olympics, why would a red blooded Canadian male be cheering for any team but Canada’s team? At the risk of deportation from my country, I shall explain.

Legend would have it that sturdy male NHL Canadians grew up playing hockey on the frozen slough outside the family farmhouse on the wide prairie.

To begin, I like the sport of ice hockey. I dislike the National Hockey League. What is customarily referred to as Canada's national team at the Olympics, I call Canada's NHL team.

The NHL is a professional sports league that has reduced a beautiful game into something akin to professional wrestling. It celebrates fisticuffs and meaningless macho posturing that delay games and produces tedium. In the past twenty years, coverage of NHL hockey fights have become a mainstay of Canadian broadcast media. As that has occurred, this sports fan has embraced baseball, basketball and American style football.

The games to date at Sochi remind me why I liked hockey. The bigger ice surface, the customary ban on fighting in international competition — and the high speed of the games in both the women’s and men’s tournaments — are a refreshing change for the clutch and grab style of too many NHL games. Elite hockey players, both men and women, are marvellous athletes. I do not denigrate them. I congratulate the Canadian women on their gold medal performance. However, the NHL has an unseemly hold on the Canadian imagination and the Canadian men’s team is Canada’s NHL team. My concern with the fetish status of NHL hockey in Canada is cultural. 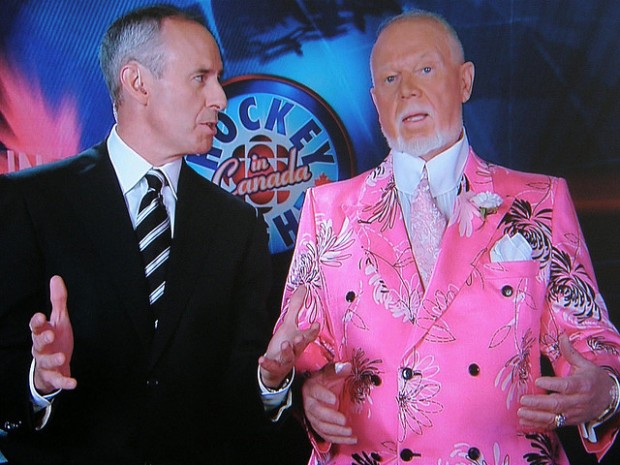 Don Cherry, in pink, with his straight man, CBC broadcaster Ron McLean, in one of their weekly appearances on Hockey Night in Canada.

Some examples. The national broadcaster has long tarnished its standards to become a shill for the game. The flamboyant Don Cherry, a former coach, has become the highly paid mouth-piece for a narrow, militaristic English Canadian nationalism on the public broadcaster’s dime. Cherry routinely puts down international players and sometimes calls players from Québec “the French” even though they are as Canadian as Monsieur Cherry. (Despite the high number of medals won by Québécois athletes at these games, the English Canadian announcers — in this officially bilingual country — routinely mispronounce the athletes’ names.) The coverage of these games show that Canadians have become more jingoistic about sports than Americans.

This is revelatory. Canadian announcers are more apt to refer to the athletes in the third person as in “us”, “we” and “our team.” Overall during these games, CBC has clearly decided that disguising cheerleading for Canadian athletes as news is journalistic policy. Yesterday stories about Olympic hockey led CBC newscasts while the bodies were still being counted in Kiev.

The myth of NHL hockey in Canada has class implications. Legend would have it that sturdy male NHL Canadians grew up playing hockey on the frozen slough outside the family farmhouse on the wide prairie. In reality, the soaring cost of equipment often makes the game a privilege for middle and upper middle class youth. 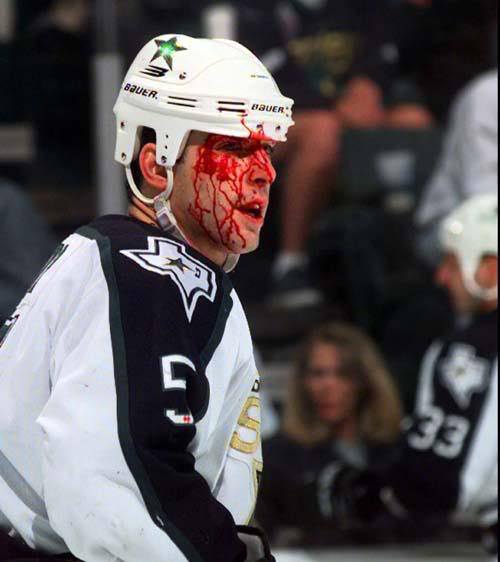 Most Canadians live in cities and in suburbs near the American border, not on the prairie or in remote northern areas. Some Canadians, led by Monsieur Cherry, love to say that the fighting in the NHL gives proof to manly Canadian virtue. It is striking that in both the National Football League (NFL) and National Basketball Association (NBA), where many players who have emerged from a minority underclass and sometimes murderous urban neighbourhoods, the rules of these games do not allow fighting. Privileged NHL players are expected and encouraged to act like louts. Rob Ford on skates.

So, surveying the scene back here at hockey bar central, I’ll quietly cheer on Sweden in the gold medal final. Yes, team Sweden has many NHL players, but Swedish professional hockey plays by international rules which I prefer. Hockey culture in Sweden celebrates puck handling skill, speed and toughness within the game not in silly, yet dangerous, fist fights.

I would encourage my grandchildren to play soccer or basketball. Here’s hoping for a great men’s hockey final at the Olympics.

JAMES CULLINGHAM is a professor of journalism at Seneca College and a film maker with Tamarack Productions in
Toronto. He once played a lot of hockey poorly.

Risking Cultural Treason
New World, Old World Connections in Global Matchup
A place to be free, or just be
Masimba Kadzirange (1971-2015)
Collapse and the Amnesia of the Golden Future

New World, Old World Connections in Global Matchup
A place to be free, or just be
Rules for Revolutionaries: How Big Organizing Can Change Everything
Isaiah Berlin on 'The Russian Preoccupation with Historicism'
Litmus Test for Closing the Canadian Mind