Category
Spoiled Worlds
Soil & Terrain
Borders & Crossings
Silently Name-Checking the Flowers
by John Davis
Published: Jun 20, 2021
Standfirst
Few can toss off a piece of cultural history and nature writing woven into an argument about where we've been and where we're going — girded by five recent books about the state of ecological progress in the modern world — but John Davis can.
Body 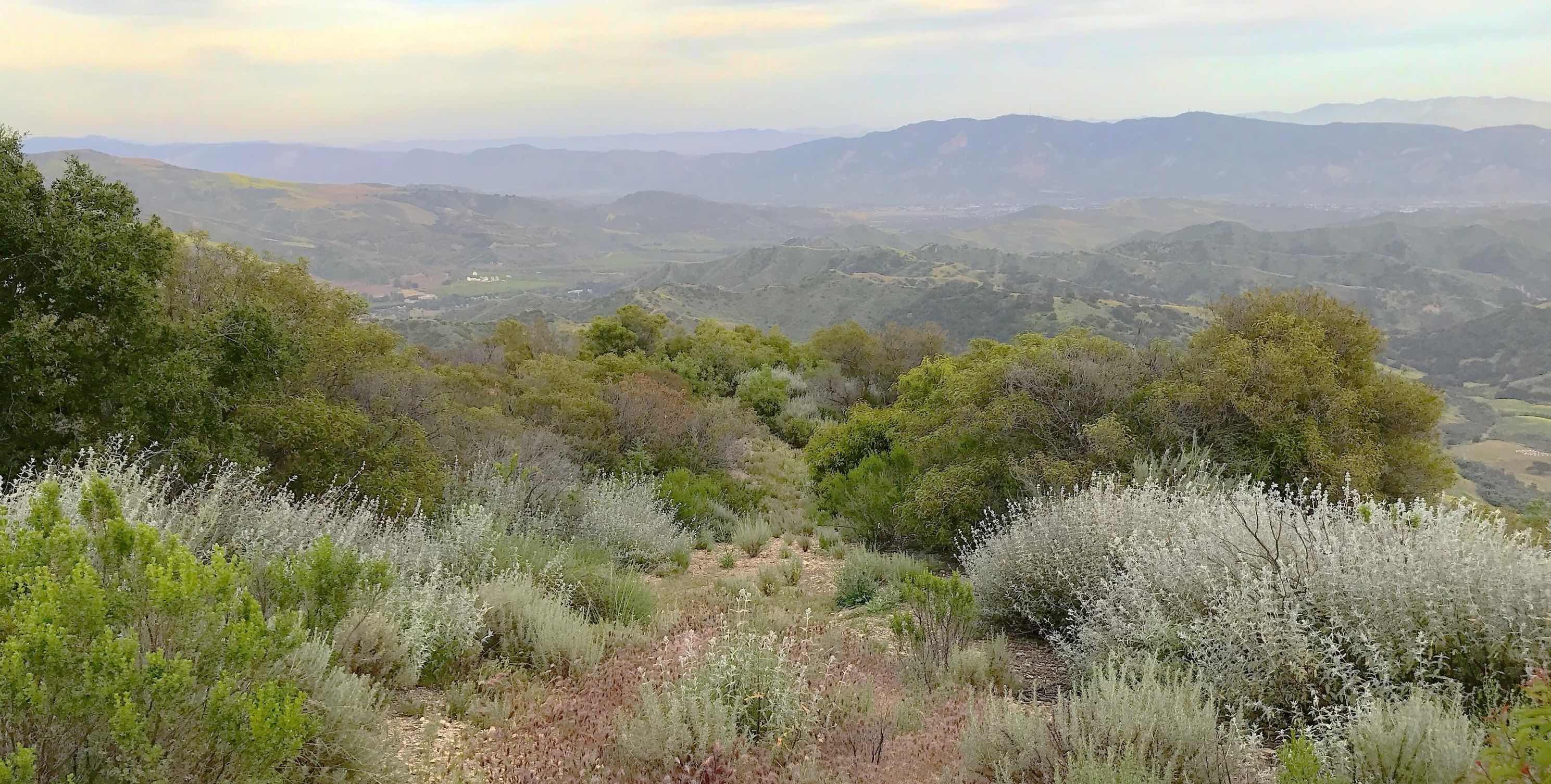 SINCE I BEGAN running chaparral trails regularly in April 1999, I have made it a point of honor to run directly from my house. For the nine of those years that I lived in Santa Monica Canyon, Will Rogers State Park, which effectively constitutes the north western wildland border to the great urban presence of Los Angeles, was close enough to count as being on my doorstep. For the past dozen years in Upper Ojai, I have lived at the Wildland Urban Interface, which in practical terms means that a short run from the house enables me to access the Sespe Wilderness, a part of the Los Padres National Forest.

After the Thomas fire, however, my old route across the hills west of Koenigstein, that took me to a precipitous slope down to Sisar Canyon, just north of the first creek crossing, became untenable. Missing the hand holds provided by chamise, mountain mahogany and ceanothus branches that bordered the declivity, this section of my trail (almost no one else ever used it) had become a charred chute, booby-trapped with newly exposed rocks, roots and fire-loosened earth.

He reaches back beyond the Renaissance to note that human history and natural history were forcibly separated at the birth of civilization . . .

I returned to check on its status about a year ago and found that the chaparral had taken the opportunity to obliterate this section of the trail. I eventually picked my way down the slope but failed to establish a new, viable route. Now, my honor be damned, I drive the mile or so over to Sisar and then run two and a half miles to the ‘look out’ which projects south over the upper valley after a steep climb out of the canyon. The real payoff, in terms of view, is not the residential and agricultural details of the valley below, which reveal themselves south from the lookout, but the recto verso experience as one turns to retrace the route. Beyond the wooded canyon to the north east, the spalled rock faces of the Topatopas rise out of the chaparral with an emphatic majesty.

This northerly view offers an opportunity to experience what Peter Linebaugh calls the ‘pre-existing condition’ – nature unburdened by the state and potentially available for the commingling of human labor by which our physical sustenance, spiritual connection with the sublime and societal relationships have long been achieved. In other words, an opportunity to be aware of the raw power of an unmediated natural world which, for most of humankind’s existence, has provided for our means of survival. 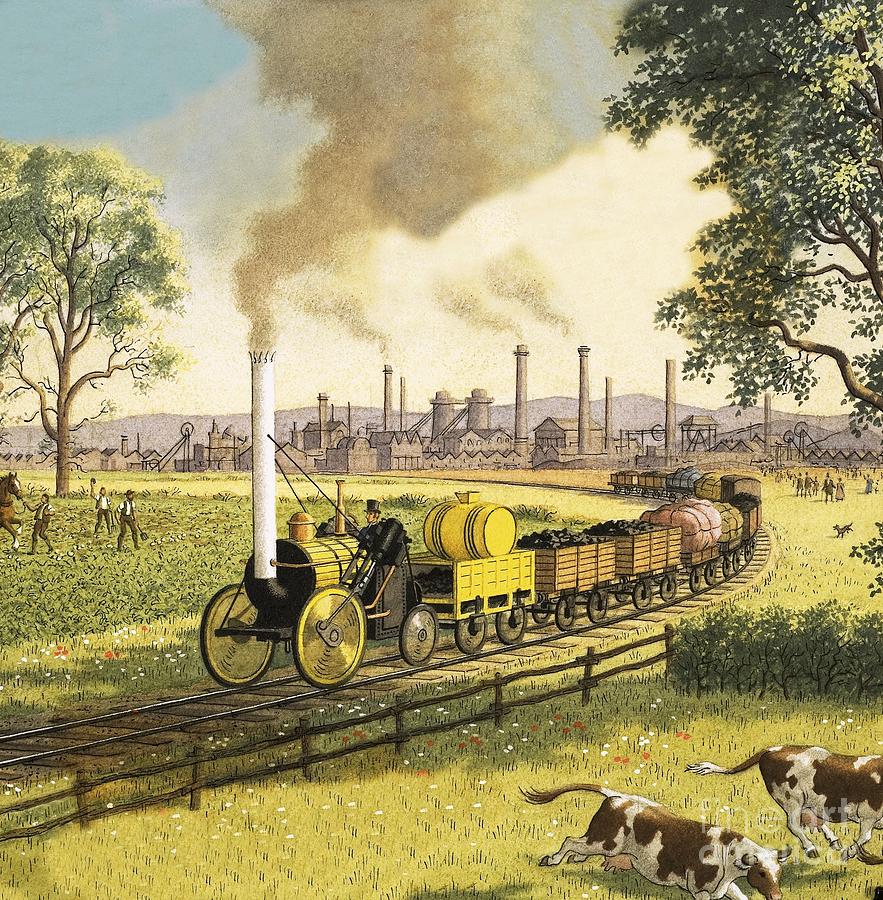 "Mechanical contrivances, such as the steam engine, disrupted the last vestiges of pre-modern comingling." [o]

Although within a ‘National Forest’ and under the jurisdiction of the US Forest Service, the Sisar trail, while gated, is largely unpatrolled and thus essentially ‘unburdened by the state.’ This republic, and the bureaucracies that do its bidding, are constructs of modernity and reflect ideologies that reach back at least as far as the European Renaissance. It was this era, based largely on a revival of Greek anthropocentrism, encapsulated in Protagoras’ dictum that ’Man is the measure of all things,’ which led directly into the development of Humanism and the Scientific Revolution both of which depended upon an idealization of consciousness that imagined it disengaged from the natural world. In this essentialized form, the human mind flattered itself that it was capable of the ‘rational’ study and exposition of that world. This perverse conjuring of human sentience – set against an inert backdrop of the non-human - remains at the root of modernity and functions as the defining trope of Western civilization.

Marx introduced an antidote to this idealism by developing an understanding of humans as historically shaped by their material conditions rather than their floating free, as the independent, sine qua non of terrestrial existence. This perception arose during an era in which mechanical contrivances, such as the steam engine, which were the practical applications of newly acquired scientific knowledge, disrupted the last vestiges of that pre-modern comingling of human labor with an enveloping natural world to which Linebaugh refers. As Andreas Malm has noted, mills driven by the essentially free motive power of falling water were quickly replaced by those powered by steam whose location was based on the availability of cheap labor rather than hydro-geomorphology. 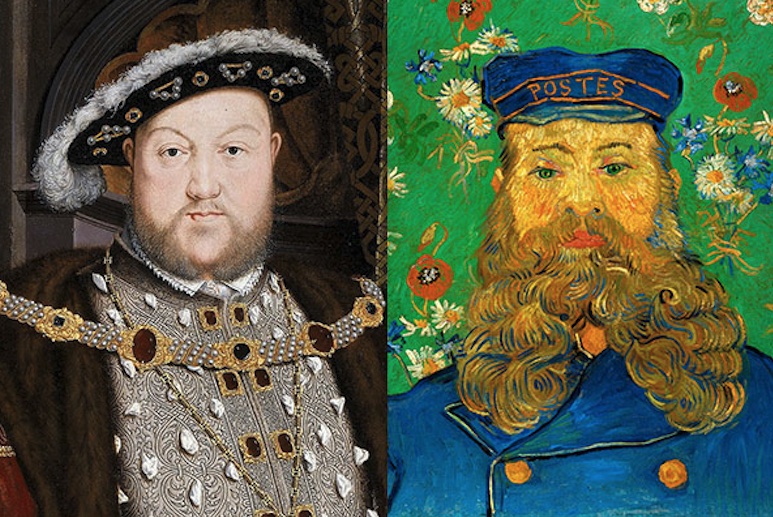 The inevitable subtext – fully comprehended or not – of a walk (or run) up Sisar, or any consciously ‘present’ experience of the wildland is the dialectical relationship between one’s consciousness and the flora, fauna, micro-organisms, and the geologic and atmospheric conditions that, broadly speaking, constitute the environment through which one is passing. Such ratiocination does not depend on the extraordinary, such as the Topatopa view, although its majesty is undoubtedly an adjunct to the expansion of awareness, but it can also be realized in the minutiae of plant life, the markings of the seasons, the ruffle of the katabatic wind that streams down the canyon early morning, the behavior of birds and other fauna and, indeed, in the geological processes that generate the reality of the rock and soil beneath one’s feet.  It is, however, the phenomenon of the Topatopas, embedded on the southern flank of the Santa Ynez mountain chain, that most often provokes within me this highly caffeinated jolt of existential enquiry. Any such disquisition depends on the level of engagement with the natural world one is willing to risk. Total engagement will, I suggest, inevitably shake loose one’s allegiance to the ideological foundations of modernity.

This relationship between human consciousness and the wild is at the core of most ‘nature writing’ of which this blog, over the last decade or so, has often been a humble exemplar, and is echoed in its masthead tagline, ‘Reintegrating Human and Wild Cultures.’ It is also the subject matter of a great deal of my reading. Dipresh Chakrabarty reaches back beyond the Renaissance to note that human history and natural history were forcibly separated at the birth of civilization which began to develop about ten thousand years ago at the end the geologic era known as the Pleistocene. As the planet warmed, farming became a viable means of subsistence and led to the rise of cities in the riverine settlements of the Middle East, and eventually to the development of the major world religions which established humans as the exclusive vessels of spiritual essence – a quality previously taken to exist throughout Creation.

He noted that the “universe is a communion of subjects, not a collection of objects.”

Modernity, which began to emerge five or six hundred years ago, further severed western consciousness from those vestiges of animism that had survived in the medieval world. Now, in the 21st century, the long process of our species’ alienation from the natural world is beginning to be reversed, at least partly because nature, hitherto taken to be a reasonably stable back drop to human activities, has been profoundly disrupted by our burning of fossil fuels for a quarter millennium, and most egregiously, post 1950. We now understand that our species’ survival is contingent on adapting to the wildly unpredictable consequences of climate change and to be thoroughly co-mingled with the fate of all other terrestrial life forms – whose plenitude is diminished daily as our bloated population takes its toll of extraction, exploitation and extinction.

Running, early morning, through the riparian woodlands bordering Sisar creek, I silently name-check the spring flowers: monkey flower, California everlasting, yellow pincushion, Solanum, Antirrhinum (pink snapdragon), virgin’s bower (the native Clematis), Eriodictyon (yerba santa), morning glory, white sage, chaparral yucca (Our Lord’s candle), deerweed and poison oak, and note the exuberant foliage of mugwort, waiting to flower in a few weeks’ time. I listen for the muffled hoot of the great horned owl, the doleful coo of the mourning dove and the chirpy notes of the chaparral wren-tit – its song sliding down the musical scale – amidst a dawn’s chorus of indistinguishable avian chatter. Oak, walnut, bay, and sycamore shade the trail, and as you begin to rise out of the canyon, Cottonwoods reach for the sky, beyond the riparian canopy. Their temerity was punished by last fall’s violent santa ana winds which have left many snapped mid-trunk, their fallen limbs strewn across the creek. 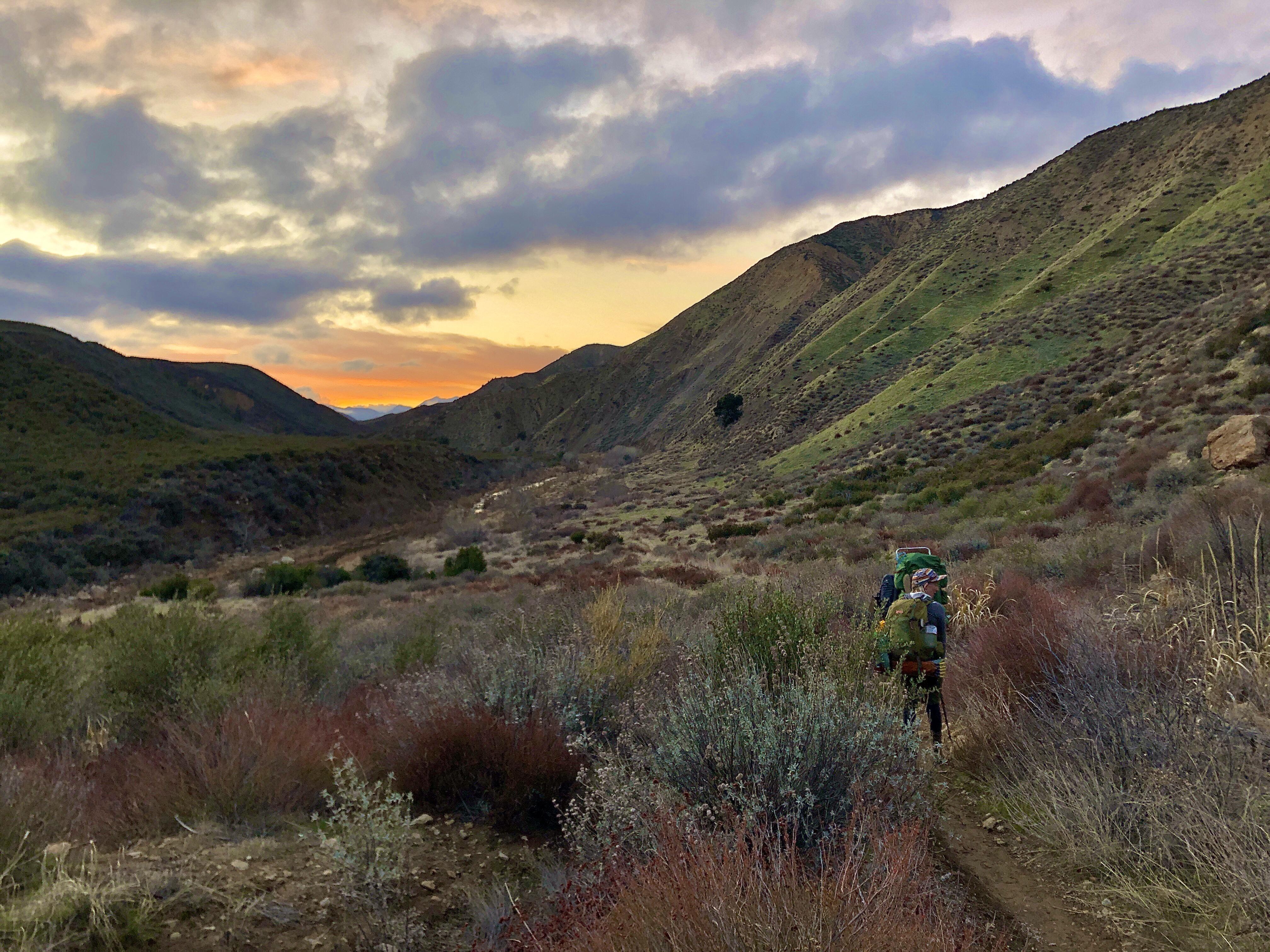 Thomas Berry, a leading twentieth-century cultural historian and spiritual philosopher, intuited a return to a more democratic devolution of spiritual essence, succinctly noting that the “universe is a communion of subjects, not a collection of objects.” The native American writer, Robin Wall Kimmerer, of Braiding Sweetgrass fame, bemoans the lack of a “grammar of animacy that might acknowledge the autonomy of plant life”. The massed wildflowers along the Sisar trail, energized by the opening of the canopy following the Thomas Fire and nourished by the nitrogen, phosphorus, potassium, calcium, magnesium, and sulfur released by its ash, demonstrate a life-force that demands an appreciation of their sentience – an acknowledgement, in other words, of their animacy.

In Underland: A Deep Time Journey, Robert Macfarlane references the reputedly pagan philosopher and novelist, Albert Camus, in noting how strangeness emanates from the ‘denseness’ of the universe. Macfarlane confronts the ice-wrapped lithic landscape in Greenland as one that “could not be communicated in human terms or forms.” What is present, Macfarlane claims, is the weird language of ice and stone. Both elements represent mute presences that nevertheless have a profound resonance at the frequency of the human soul. It is thus that the spalled face of the Topatopas speaks across eons in the basso profundo of the cosmos, reverberating within the deepest levels of human consciousness. ≈ç

JOHN DAVIS is a California-based architect who also writes a blog, Urban Wildland, and is a regular contributor to The Journal of Wild Culture. He lives in the Upper Ojai.

Eager for the Infantry
Gimme Shelter in the Deep Future
Forced Moment at El Torcal, Andalucía
Art in the Garden: Wild New Territories - Pertaining to Things Natural
Theatre & The Meaning of Ecstasy