Category
Suffering & Violence
Ecologies
Wildlife & Wilderness
Summoning The Shrike
by Anne McGouran
Published: Oct 06, 2018
Standfirst
From this week's public mocking of a woman who came forth in front of millions to relay an experience of being muzzled (Donald Trump re: Dr. Christine Blasey Ford) to the 50th anniversary of the 1968 Mexican massacre of students at Tlatelolco, we are reminded how self interest, often political, slips us into various states of wickedness. This last year, capped by the confirmation of a clearly dubious character to the US Supreme Court, presents further stages in a civilizing process that makes us aware of savageries within. This little tale of "a macabre songbird that acts like a hawk" might remind us of how we aren't always so far from those in the animal world whose defiant urge to get what they wants (to sustain and thrive), whatever the cost and means, resides in us as well. — The Editor
Body

The Loggerhead Shrike — a cute little bird by all appearances — on its preferred, barbarous locale. [o]

In late January I hiked over to Furry Friends Bizarre Bazaar, a rummage sale in a tumbledown cottage across from the bowling alley. “All proceeds to support sick and abandoned animals.” Buried in a pile of castoff art, I spotted a 6 inch by 7 inch watercolour in a gold faux finish frame. ‘Loggerhead Shrike and Hawthorn’. A grey bird with a black mask (the size of a small starling) hovers against a backdrop of red berriesand green leaves. The label on the back reads: “This beautiful, robin-sized bird is quite uncommon and vulnerable to extinction. It lacks the strong legs and talons of hawks and other larger carnivorous birds. Even though its numbers are declining, it may still be spotted in the orchards, grasslands and open spaces it loves to frequent.”

I vaguely wondered about the significance of the hawthorn bush then put it out of my mind. I placed the Loggerhead Shrike print on my desk beside my special origami box, Kente cloth postcards, and other totems.

It sits on my desk — wings folded, hooked beak retracted.

A mid-August heat dome lay over southern Ontario. We set out at first light and hiked the wooded shoreline near Tiny Marsh on the cusp of the Canadian Shield. On impulse, we stopped to read the Ducks Unlimited entrance sign at Matchedash Bay: “A Wetland of International Importance and Important Bird Area”.

We scrambled over limestone bedrock and parched savanna grass into the forest. The understory rustled with unseen creatures. In an open grassy area dotted with spiny shrubs we noticed what looked like strips of dried jerky skewered on the ridges of a thorn bush — the remains of tiny songbirds displayed like trophies. Exiting Matchedash, we paused at a pavilion full of interpretive signs. “Shrikes frequently leave their prey in a spiked and hanging state on the thorns of a hawthorn bush.” 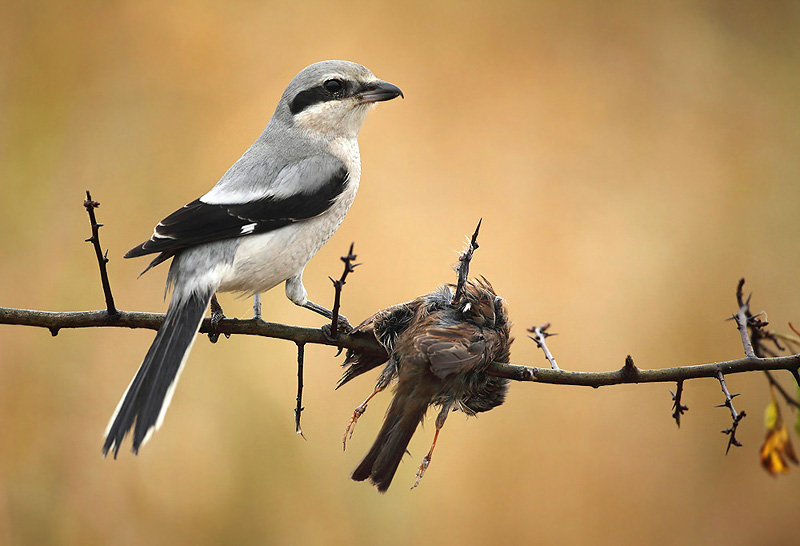 The Loggerhead Shrike with its impaled prey. [o]

The shrike is the avian world’s Vlad the Impaler. According to the Cornell Lab of Orthnithology, “The loggerhead shrike’s head is large in proportion to its body size . . . It impales its prey on sharp objects such as thorns and barbed-wire fences (which is) a unique adaptation to the problem of eating large prey without benefit of the stronger feet and talons of raptors.” The lovely hawthorn beloved of poets (or any convenient thorn tree for that matter) serves as a handy spike for the shrike’s stash of insects and birds after it guillotines them. To hold its prey secure while eating it or to store it for later consumption, the shrike tears the flesh into smaller morsels which it spears on a sharp object. “A greedy bird fond of killing”, it stashes away more than it needs.

The Eastern Loggerhead Shrike is one of Canada’s most endangered songbirds due to a shortage of suitable breeding sites. For this reason, Canadian researchers are collaborating with the Smithsonian’s Conservation Biology Institute to help breed new populations of shrikes. A macabre songbird that acts like a hawk.

Mysterious and unsettling. Its shadow sweeps over me and a puff of feathers explodes above my head. 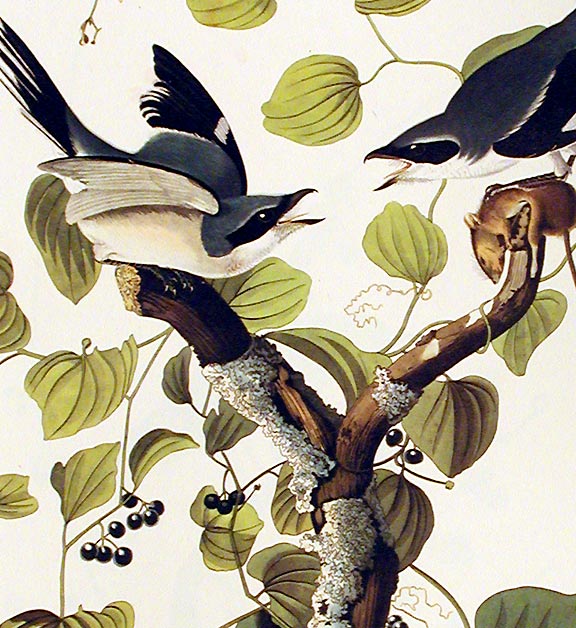 ANNE McGOURAN's nonfiction has appeared in Queen’s Quarterly, The Smart Set, Coachella Review, Transition Magazine and is forthcoming in Northern Terminus Journal. Her fiction has been published in Emrys Journal and is forthcoming in Understorey Magazine. She resides in Collingwood, Ontario where she has developed a fascination with ice huts and orchard ladders.

Summoning The Shrike
Foreign Invasion: The Destructive Habits of Introduced Species
Gazing in and out to Sea: 5 poems
The Balkan Lynx: A Key Player in Europe’s Rewilding Plan
A Blanket Over Us — 5 poems by Julia Travers

A Blanket Over Us — 5 poems by Julia Travers
A geographer-poet in the sub-zero wilderness
Foreign Invasion: The Destructive Habits of Introduced Species
Gazing in and out to Sea: 5 poems
When Deer is Not Venison