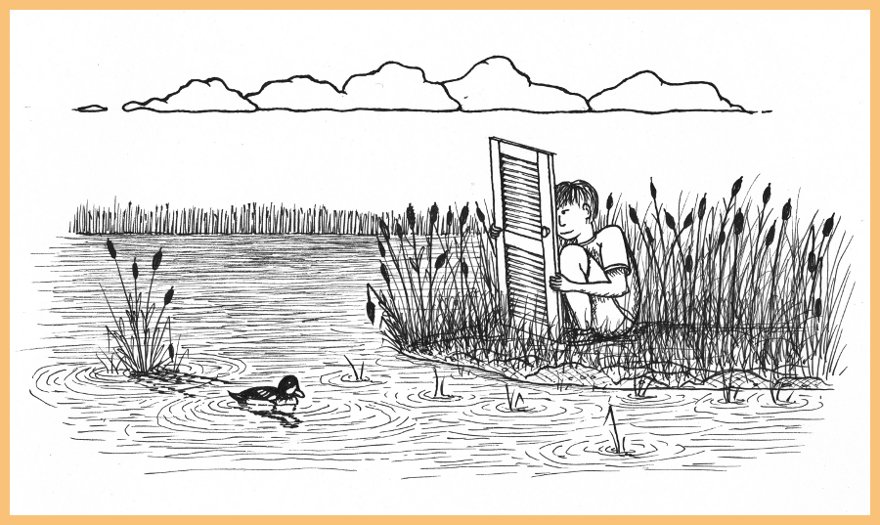 For the first five years of my life, home was a small and slightly mouldy caravan. When we eventually moved into the main house, Newtonhill, the caravan was moved and a large rabbit burrow exposed beneath. The rabbits who lived there were not your typical rabbits – they were special. In the centre of their foreheads, each and every individual had been blessed with a white, diamond-shaped mark. It was as if they had been chosen.

Whenever I return home I look out for the Newtonhill rabbits, and, occasionally, I see them. Something, however, is different. The precise, sharp-edged diamond shape that I remember from my childhood has been replaced with an indiscriminate blob. Was the diamond ever there? It seems unlikely. Memory, though, is a bit like a tabloid journalist; it'll do anything for a good story.

My father, on the other hand, known locally as "The Mad Professor on the Hill", has always favoured hard evidence. He brought up his children to view the world in a very particular way. It was as if we were aliens who had just stumbled across an exciting new planet (scientists need to be aliens, and so do journalists). Nature was like a gigantic jigsaw puzzle, teasing in its complexity, and full of strangely shaped pieces. Finding these pieces – and putting them together – gave me an enormous sense of satisfaction, but it wasn't easy. Thankfully, our parents were on hand to help.

“If you go to the ditch, you might see a Caddis Fly larva!”

Orkney was full of secrets – you just had to know where to look. Finding one thing though – a small pug-faced fish called a blenny, for example – would almost invariably lead to the discovery of something else. Eventually, I'd put together a full salt-water aquarium, complete with anemones, blennies, crabs, winkles and whelks. Of course, all these strange creatures had to be fed, and so every day we'd go down to the beach carrying empty yoghurt pots, and scramble about among the stones searching for small gammarus shrimps.

As well as assembling the aquarium, we also introduced various lucky animals to the garden pond (the garden pond had many friends). The stickleback fish that we'd caught in the local reservoir gorged themselves on clouds of tiny daphnia (water fleas), while an army of frogs did their best to fatten themselves up for a winter buried in the mud. A passing heron, alerted by this bubbling cauldron of life, would occasionally swoop down and make things a little less crowded. It's always nice when wildlife comes to you, but for the most part you have to go to it.

This, however, was only the first step. What followed was a series of covert operations, tracking and observing various animals in their natural habitat. During one summer, I became particularly interested in the lung capacity of wild ducks. I'd lurk along the shore, or beside a lake, and wait for a bird to dive. When it happened – and it didn't always happen – I would count the number of seconds that it spent beneath the water. For each species I'd take as many counts as possible before working out the average dive time. Scaup and mergansers were the most impressive under-water specialists, able to stay submerged for up to one minute.

As well as hiding behind rocks or tufts of grass, I sometimes used a closet door that I'd carry around like a war shield. It had a sort of grate through which I could spy upon my targets. Using this subtle disguise, I observed various species and took careful note of their behaviour. On top of my own 'research', I also monitored population figures and passed my data on to the various bearded men who worked for Scottish Natural Heritage or the RSPB.

Orkney, without a doubt, is a bird-watcher’s paradise, and it draws hundreds of them every year. For most people who actually live on the islands, though, birds are simply a part of everyday life. During the breeding season, waders such as Whaup (Curlew), Teeick (Lapwing) and Oystercatchers provide a cacophony that never seems to end. During brief summer nights, I used to lie in bed listening to their calls. For some reason, it would send a shiver up my spine. The sound was haunting and plaintive, like hearing ghosts from every season past. It made me want to jump straight out of my bed and run through the long grass, chasing their wings and their voices. It emboldened me to their mystery.

Sometimes, when I was out during the day, I'd come across an injured bird, and bring it home with me. A Little Auk that had crashed into a nearby field once spent the night regaining its strength in the bottom of the oven, with the door slightly ajar to prevent it from over-cooking. It had been discovered lying face-down in a field, dazed and bewildered from its confrontation with the ground.

Perhaps it had been trying to emulate the Snipe, a bird whose sky-diving skills are rather more renowned. During the Snipe's courtship display, it falls from the air, holding out its modified tail feathers in the slipstream. This causes the feathers to vibrate, resulting in an indescribable, mechanical shivering sound (in Japan, Snipe are occasionally referred to as 'Thunder Birds'). It's still one of the most beautiful sounds that I've ever heard, and it only happens during calm, moonlit nights.

Whenever I wanted to hear the Snipe, I would walk up a long, narrow track about a mile from Newtonhill, where the neat farmland turns to heather. I’d get there around dusk and wait for the show to begin. The land is used for grazing sheep, and many of the skulls from those that had died were embedded in the ground. I remember feeling that I was being watched, and not only by the sheep. Perhaps there was a big cat living up there, or maybe Orkney's own abominable heather-man. Sometimes, the sensation would become so great that I'd have to turn around and race back down the track. Safe once more, and feeling a little foolish, I'd walk home with a procession of Snipe still drumming inside my head.


Next up: Vol IV, The Poet, to be published Friday 15th February!

Having read vol 1 - 111 of Token Wild Boys musings I am hooked! Tales of hoppits, Newtonhill rabbits, gammarus shrimps, saucepans in the sky and courting snipes on moonlit evenings are all welcome escapes from our crazy world. I do believe my good friend, the mad professor on the hill, still wears those shirts? Beautifully written and illustrated...can't wait for vol 1V.

captivating and charming and

captivating and charming and

captivating and charming and somehow nourishing. great great piece of writing, love it.