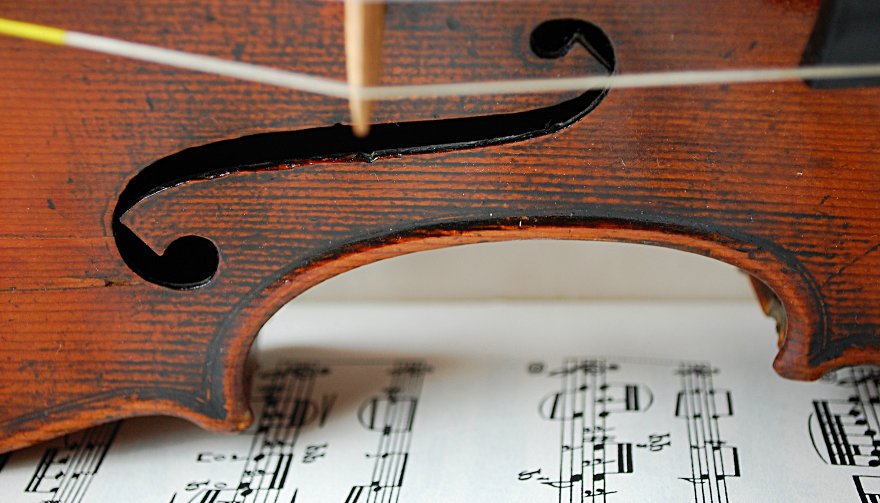 When she was about fourteen years old, my older sister Fiona was determined to learn the fiddle. We'd grown up listening to traditional Scottish dance music on the radio, and were already familiar with much of the local repertoire. Many of our winter evenings were spent listening to Robbie Shepherd's show, ‘Take the Floor’, on Radio Scotland. The fiddling bug was well-known to us, but we had no fiddle from which to catch it. This all changed when my elder sisters began spending time with the family of a neighbouring farmer. His daughters were both fiddlers, and Fiona watched and listened in awe. Before long, she was pleading with our parents to buy her a fiddle of her own.

She was as surprised as the rest of us to find that a model belonging to our great grandfather was being kept in storage out in the barn. Unbeknownst to us, our father had been “looking after it”, as he put it, for decades. A fiddle's corpse was eventually found lying face-down beneath a pile of boxes, stuffed unceremoniously into a plastic shopping bag. Before moving into Newtonhill, it had been kept outdoors beneath a layer of tarpaulin. Despite being badly cracked, though, it wasn't beyond repair. Miraculously, the bow had somehow survived unscathed, and the violin's original catgut strings were still intact (despite their name, catgut strings have never been made using the guts of cats, but rather the intestines of larger mammals such as sheep and goats).

Our great grandfather, Percy Driver, had been a gardener at a big country house in the Cotswolds. Newspaper cuttings from the time describe him playing the fiddle at local events. During wartime, my father – whose family were living in Birmingham – would escape the city and go to stay with his grandparents. When his fiddle was re-discovered in our barn, it was as if a part of Percy himself had risen from the dead. Over time, of course, musicians and their instruments become inextricably connected.

Following 'Percy's' re-birth, he was sent to the local luthier – the fiddle doctor. Once he'd been fixed, my sister sat down and started teaching herself to play. Like the rest of her siblings, Fiona wasn't attending school at the time, and dedicated most of her days to the fiddle. Old folk tunes were soon tumbling around the house from dusk 'til dawn. Fiddle music quickly became her obsession. She hid herself away for days on end, with Percy lodged between her chin and her left shoulder. Sometimes she wore a tartan suit, giving her a strange and slightly military aura. At night, due to lack of space, the fiddle was kept beneath Fiona's bed on a blanket. Although this was the safest place for him, she was terrified that the bed would break while she was asleep, crushing her dreams beneath it.

The sound of Percy's fiddle is inseparable from those who've played it.

If Percy and his fiddle had been somehow 'woken up', then so too had my sister. Before its arrival she'd been an odd teenager, mature beyond her years and with a rather stoic nature. All of a sudden though, she'd come alive. It was as if Percy's spirit had been activated, and had given her a new voice. Within a few years she was one of the most promising young fiddlers in Scotland.

Over the past decade or so, Fiona has come to know Percy's various moods (his 'Percy-nality' – sorry!) in intimate detail. She knows how he responds if he gets too hot or too cold, and she knows how much he dislikes playing Bach and Beethoven. As fiddles go though, he's rather cooperative - certainly more so than her others, TJ and Erik. She bought Erik in a junk shop and later found out that he was worth rather a lot of money. The more 'special' a fiddle is, the more of a diva it tends to be ('Strads', I'm told, can be a nightmare).

It's hardly surprising that people become so attached to their instruments. After all, they can be an extension to some of our deepest passions and desires. It's also perhaps worth remembering that fiddles are made from wood; the tissue of a once-living organism. As such, they react to weather, and vibrate in particular ways on 'hearing' certain kinds of music. Playing Vivaldi on a violin for years on end might just make it better at playing Vivaldi in the future.

The great biologist D'Arcy Wentworth Thompson pointed out that the growth of an organism results from the particular field of forces to which it's exposed. These forces stem partly from its own genetic make-up (the direction in which a spiral shell grows is dictated by the presence of a specific gene) and partly from its environment (the back half of a hermit crab takes its shape partly from the internal structure of the empty shells that they wear as extensions to their body). The music that we make on an instrument such as a fiddle is partly determined by its design, and partly by other forces such as the stroke of a bow, or the pressure of our fingertips. The sound of Percy's fiddle is consequently inseparable from those who've played it. It connects three generations of my family and will undoubtedly inspire more. As well as having composed hundreds of original tunes, Fiona now teaches a small army of aspiring young fiddlers back home on Orkney. Percy would surely be proud.

Next up: Vol IX, to be published Friday 3rd May!