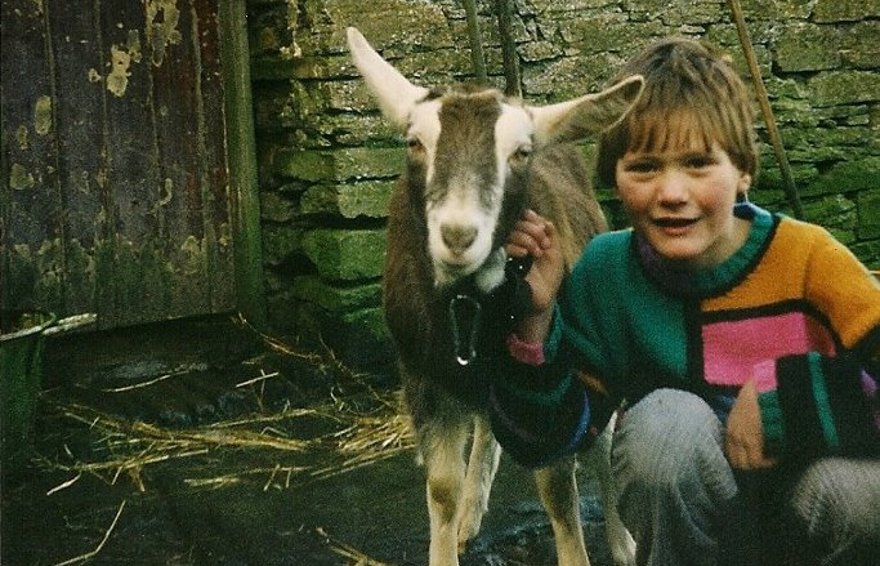 For many years, school buses had driven past Newtonhill without stopping. Those on board would stare out of the windows and wave, or make obscene gestures. Occasionally, when I heard a bus coming over the hill, I'd rush to mount one of the old goats, riding it about the field proudly in order to express my freedom. My siblings and I had been nicknamed "The Gypsy Kids" by some of the local school boys. There was part of me that enjoyed being different, but another part that wondered if I was missing out. When I finally went to school at the age of fourteen, it felt like entering the lion's den.

I remember nothing of my first day at Stromness Academy apart from the morning bus journey, and meeting my mother afterwards. Much of the first year or so remains similarly blank. It wasn't an easy time, and my brain has probably done me a favour by forgetting as much of it as possible. As part of my initiation into school life, I felt that it was important to look the part. In an attempt to dispel my "Gypsy Kid" reputation, I persuaded my mother to buy me some new sports clothes. When it came down to it though, I never felt comfortable being associated with one particular image - nor, for that fact, one particular group. My solution was to try and be a little bit of everything. Sadly, the combination of tracksuits and eye-liner didn't quite work.

It wasn't only matters of appearance that were causing me problems. Outside of school I spent much of my time collecting moths, bird-watching and playing cricket with men who looked like John McCririck. One of my cricketing mentors – who is actually rather clean-shaven – happened to share my passion for birds. Part of his job was to put together an annual ornithological field guide, for which I provided illustrations. These were not typical past-times among Orkney's teenage population.

Although I'd lived on the islands all my life, I never really felt that people considered me a 'native'. This was partly down to my accent. My Englishness was all too apparent, and this – combined with other things – provided my fellow pupils with plenty of ammunition. In English class, we studied Lord of the Flies by William Golding. The story made a lot of sense; I was seeing similar kinds of behaviour – albeit on a lesser scale – all around me. For a long time I hardly blinked an eye. I was certain at the time that people who acted this way only did so because they were somehow 'inferior'. When my instincts eventually caught up with me, and I started to retaliate, I experienced a disturbing mixture of satisfaction and dismay.

One of the first things I said to him was: “Do you like geese?”

To my relief, I didn't always bring out such a violent reaction in people. One afternoon, a new pupil arrived at Stromness Academy. He'd been feeling ill and had arrived late to class, looking a little yellow. The other seats had already been taken and so he had the dubious honour of having to sit next to me. One of the first things I said to him was: “Do you like geese?” (I'd been listening intently to the flocks flying over the school). To my surprise, he answered the question with integrity. “Yes” – he liked geese. I had found a friend.

During lunch-breaks, a group of us would pile into the games hall and play a frantic game of football that lasted until the bell rang. I'd hardly played before going to school, and my ability on the ball was a great source of amusement. Thankfully, the feeling of scoring a goal brought me such joy that nothing else seemed to matter. Over time, my personality began to come to the fore.

Throughout my first two years of formal education, I approached homework as a form of art; drawing careful colour illustrations to accompany my work, and writing everything out in my neatest hand-writing. If I made even the smallest mistake, I’d tear up the paper and start all over again. It was only once I started actively responding to the provocation of my fellow pupils – and acquiring a social life – that my grades began to slip. Worried about my levels of concentration, I began to quiz my teachers about the possibility of installing “individual learning pods”. They didn't take the suggestion very well.

There was only one aspect of life at Stromness Academy that continued to terrify me: the school disco. I assumed that the ritual of the disco was a complex one, involving various elaborate dance moves that everyone else would have learned by heart. Afraid of being laughed at, I'd always find an excuse to stay at home. I was, of course, giving Britain’s dancing culture far too much credit. When I finally went to university, I realised how rare it is for a Scottish man to move at all – let alone from the hips.

My experiences of school have taught me one thing above all: conventional forms of socialisation don't necessarily make you very good at things.

Next up: Vol XI, coming soon!