Romanticising the provinces – contemporary art and the ‘heritage’ environment

Category
Art & Aesthetics
Dissent
Gardenalia
Romanticising the provinces – contemporary art and the ‘heritage’ environment
by Tom Jeffreys
Published: Nov 29, 2012
Standfirst
UK: Tom Jeffreys abandons the capital to immerse himself in the art of the countryside.
Body 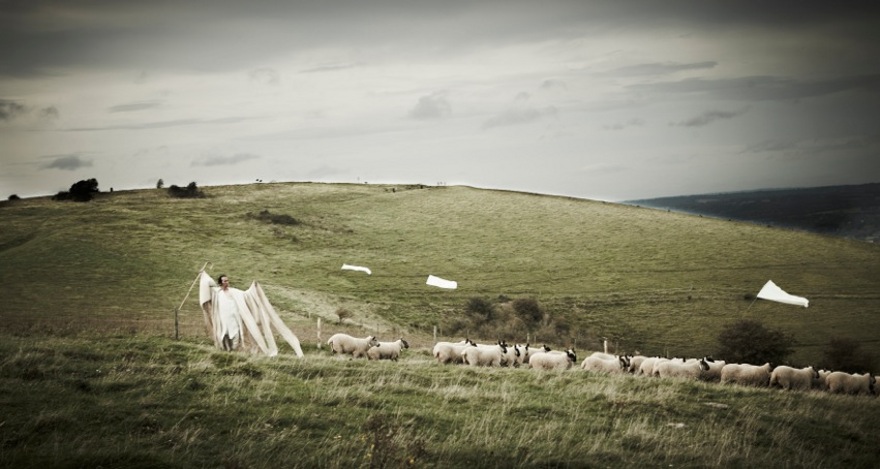 Homogeneity, like damp, is rising. As the white cube model proliferates across the globe – Larry, Jay, Ivan, David – so too does an art that exists entirely within the institution: college and gallery; fair, collection, biennale and museum. Pure and white and clean and closed. It is an Art of capital letters and capital cities (London and New York, Paris, Hong Kong…), an industry for cities looking to capitalise (Venice, Basel, Gwangjhu, Margate…), an art of capital and the crisis of capitalism – oligarchs and auction houses, copyright and branding.

At the same time, as ever, is something else – an art that toys with the village hall, that speaks to publics, does things, goes places. The art, in fact, is sometimes the same; the context makes it something else. Or does its best.

The National Trust, it seems, recognises much of this. In 2009 they initiated a programme of contemporary art commissions entitled Trust New Art, which has seen an incredible range of commissions up and down the country – a dead oak tree wrapped in dyed red fabric; a procession of white-clad paganism; an off-grid treehouse observatory. Up until July of this year it was funded by the Arts Council, but after deeming the programme a success, the Trust has now taken on the costs itself. 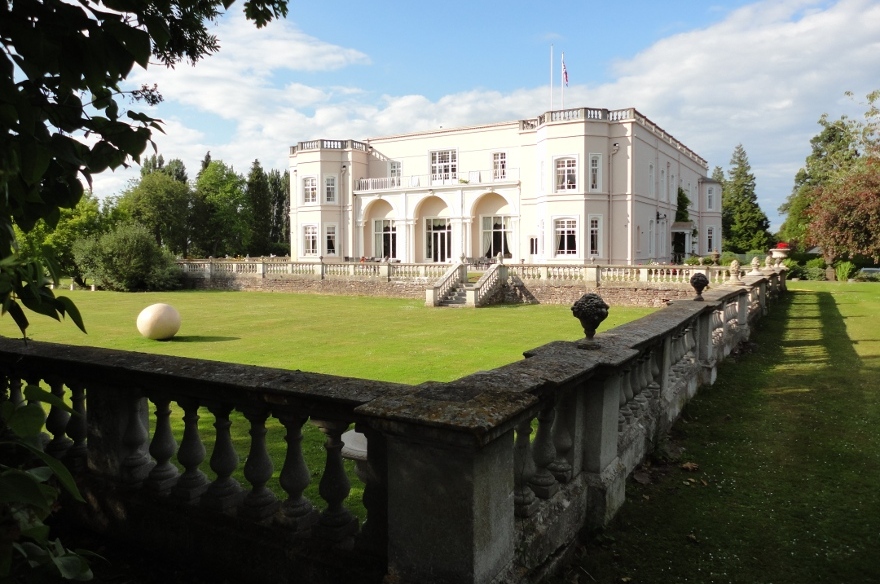 Tom Freshwater, The National Trust’s Contemporary Arts Programme Manager, sees the difference that context can make as a question of emphasis. “A gallery,” he says,  “(be it white cube or historic) is an institution with a mission to display works, whereas a National Trust property may be a home, a coastline, a hill top, a castle; a place with its own narrative. People bring different things to such an encounter.”

Christabel Armsden agrees. Director of Armsden Gallery, she recently organised 20/12 London Art Now, an exhibition of contemporary art that took place at a grand 17th century house called Lodge Park, in Gloucestershire. “Central to our endeavours as a young business,” she explains, “is to reach a wider audience than the traditional gallery/curatorial dealership – to engage new audiences for contemporary art.” Hence the decision to locate the exhibition outside of London, as well as to host supplementary education events. “It was inspiring,” Armsden continues, “to see National Trust members respond to the exhibition, some of whom are not necessarily plugged-in to London’s contemporary art scene.”

Such a public is very much in evidence up in rural Lincolnshire, on the October day I visit Isaac Newton’s house – under the last crisp sun of autumn, or so it seems. As part of Compass – a multi-venue programme organised by brilliant local contemporary arts organisation, Beacon Projects – Woolsthorpe Manor is playing host, for a month, to two unusual artworks. Outside the charming National Trust-managed farmhouse, Jem Finer’s caravan takes excitable, squashed-in passengers on a surreal journey through space and time; whilst inside, in the kitchen, Bethan Huws has assiduously annotated a little-known text by Marcel Duchamp entitled, aptly, The Juggler of Gravity.

The title draws our attention to the link between content and context. Just to the right, on one wall of the kitchen is scratched a large image of St Waltham’s Church in nearby Grantham. It is, I’m assured by an enthusiastic guide, the work of young Isaac himself – but of course nobody can know for sure, and it’s in everyone’s interests to keep the belief alive. Elsewhere the walls are carved with images of a windmill and an enigmatic circular symbol designed, apparently, to ward off evil spirits. Newton’s too? Upstairs in the bedroom, a numbered list of sins written out by the nineteen year-old Isaac; out in the garden stands the immortal apple tree.

Whilst Huws’ work does little for me, its placement here draws attention to the way we attempt to understand the past. Huws’ devotion to Duchamp – the near-obsessive attention to his writings – is not dissimilar to the way in which visitors and staff alike pore over the alleged scribblings of the young Newton, as if such physical proximity might bring history closer; as if the process of sustained direct analysis could condense or somehow finalise meaning. 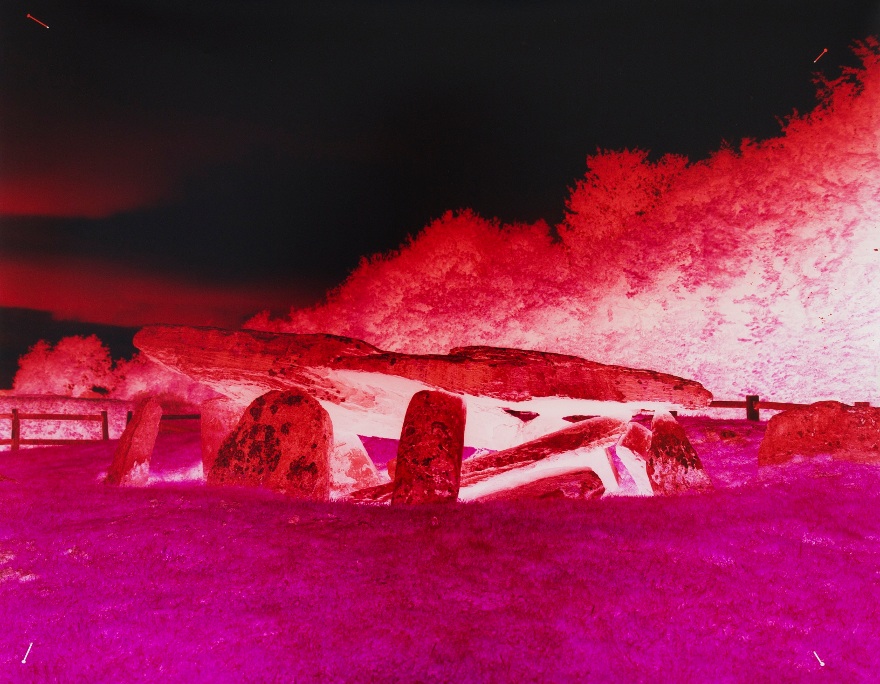 At the same time, down in Herefordshire, such meanings cluster and proliferate, as stuttering attempts at explanation form the basis for The Stone of Folly. Curated by William Cobbing, the exhibition takes its cue from the local legends that surround Arthur’s Stone, a Neolithic tomb that overlooks both the Golden Valley and the famous Wye. Fenced off pointedly, half-heartedly, the stone marks the spot, so legend has it, where King Arthur slew a giant; the indentations on the 25-tonne capstone were supposedly caused by his mighty fall. But legend is easily confused: the indentations have also been attributed to Arthur’s knees or Arthur’s elbows, or maybe it simply marks a battle. Nobody is quite sure. Standing atop the stone – heavy perhaps, but surprisingly underwhelming – I can’t see any indentations at all.

The exhibition takes place just a fast, winding drive away at Down Stairs Gallery, which, as the name suggests, is situated downstairs at Great Brampton House – a strange old manor house with its top floor chopped off. Owned by Martin Miller – he of gin and antiques guide fame – it’s an elegant mass of ageing clutter – rich with objects, colours, patterns and narratives, in direct contrast to the stripped-back aesthetic of today’s contemporary art space.

Down Stairs Gallery is conventional enough – white, clean and bare – but Cobbing’s exhibition fills the space with an echoing clamour of half-formed stories and suggested tales. Most instructive perhaps in this context is Francesco Pedraglio’s Scenarios (Pineapple) in which half-started narratives are read out and projected over a small, innocent, white pineapple – a blank canvas for the imposition of meaning and significance. Mike Cooter, meanwhile, explores the commercialisation of basic forms. Benedict Drew plays with the idea of feedback. 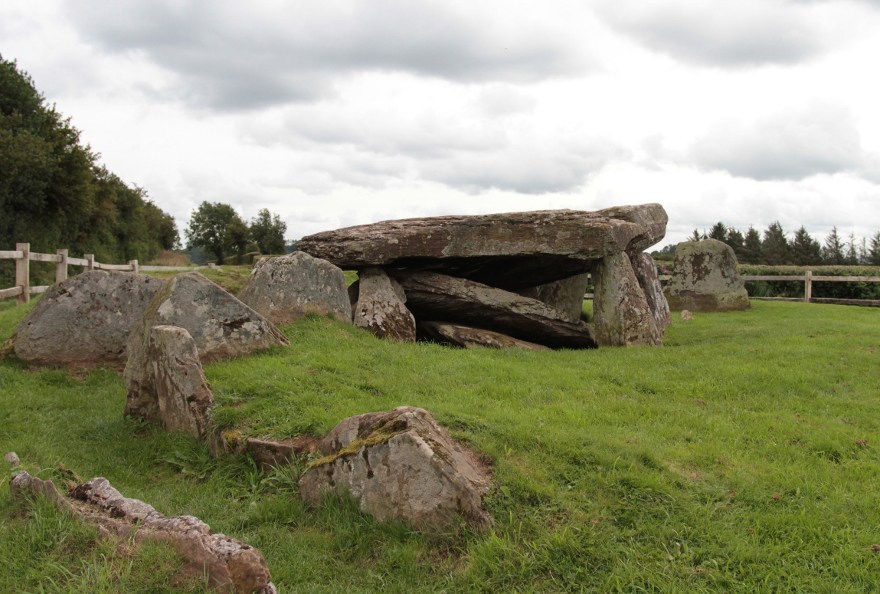 These halting discussions – which arguably take place solely within the confines of the gallery – are rooted in something more local, perhaps more real, by the presence of Nicholas Pope, who lives nearby in Herefordshire, and by the essay by Jonathan P Watts that accompanies the show. Delving into ancient history and local lore, books and walks, Watts weaves a kind of spell around Arthur’s Stone – one that’s visually encapsulated by the photographs of Martin Newth. Produced over the course of two days, using a small van and a large cardboard box, Newth’s overexposed images are the most direct response to Arthur’s Stone. Electrified in sci-fi magenta, the stones throb with the energy of myth and semi-historical meaning. Pinned to their mounts by the same pins (still visible) used to hold the paper inside the camera, these images may be seen to foreground their own processes, and thereby the creation of meaning more generally – particularly within the context of an art world that arguably exists entirely for the proliferation of meaning-making.

This is the kind of focus that art can bring. As Tom Freshwater puts it: “Art switches people out of a passive way of being into being more curious about what they see and where they are.” Such heightened self-awareness also sharpens one’s impression of the worlds outside the gallery. Outside Great Brampton House, for example, a pair of Indian runner ducks zips across the lawn, standing tall, an italicised double ‘l’. In Lincolnshire, it’s pigeons and pheasants that catch the eye, at Grimsthorpe Castle – elegant and weighty, atop a long, long, undulating drive. Here again the work of Bethan Huws for Compass feels a little flat for me personally; instead, the real interest lies round the back of the house, amid stately stretching lawns: a mesmerising sight as strictly formal gardens give way to neat rows of forest – nature tamed and owned and lovely. But I’m not sure I would have noticed so much were it not for art’s presence: hedges clipped as syllables; ochre leaves plopping to the ground amid blackly melting mushrooms. Pheasants fretting and panicking in the undergrowth; upright and proper, they flee from me with dignity

A little later, at Ayscoughfee Hall, Huws has imbued an ancient hedge of yew with archival birdsong chatter. Round the corner, exotic caged birds echo the calls. (A pigeon has snuck in.) Ayscoughfee is a strange one: a dark-bricked medieval hall, its interior overlaid, seemingly, with Regency interior prettiness; then, later, with the carpet tiles of the council conference centre. Throughout the building, Amanda Coogan has peeled through the layers with the help of seven emerging performance artists. A girl drifts through the rooms, muttering and dribbling. Another stands still at the window; another hunches in the corner. In an empty room, a circle is formed and repeated and retrodden – yarn wound and unwound; histories told and retold. 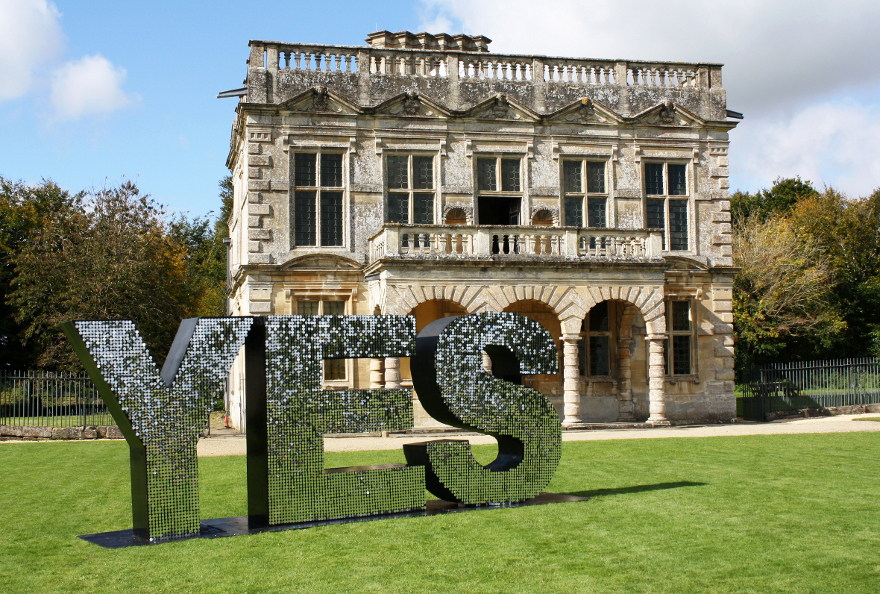 In some ways, this performance – by Hestia Peppe – is a neat metaphor for what Beacon Projects are trying to do: a weaving together of contemporary art, 'heritage' architecture, nature, and the provincial. Run by artists Nicola Streeten and John Plowman, who live together in a converted Methodist chapel in Wellingore, the organisation has been placing contemporary art in strange locations (a stately home, a village hall, an old malting complex, the very bus that connects them) since 2004. Outside their house stands The Broadcaster: disseminator of information, the village noticeboard as gallery space. We have supper with Nicola and John and their artist friends who live in the next-door village, in another converted Methodist chapel. There’s a lot of them about, they say, in these parts.

One of the things that interests me about this kind of approach to art is the sense of risk. As the UK become increasingly urbanised and art becomes ever more aloof – dealing only with High Net Worth Individuals and recession-proof oligarchs – to turn your back on the capital, to live and/or exhibit in the provinces is a statement in itself. This is particularly evident at Ayscoughfee Hall where a side room by the main entrance plays host to an exhibition of ‘local’ art; little portraits of celebrities, a cherished pet, a scenic landscape or two. For the Art of the capital to be here, amongst the little people – unconnected but at risk of infection – is a brave move; a challenge to the art itself – what do you contribute here, in this world?

Art in these contexts opens up curiosity, ambiguity, distraction – all those things that the white cube shuts down in favour of a ‘pure’, direct encounter. Even when the art falls short – as it so often must in the face of nature, of history – the senses are heightened, placed under more intense scrutiny and focus. There’s a kind of charge, a sensory alert, a sensitivity to what is or might have been. It’s risky and alive: no whitewashing, but mud and history and leaves and the public.

The skies move mauve in an autumn evening and golden light dances upon the foliage. London beckons.

In spite of being a Londoner I love seeing art in the provinces and particularly in unexpected contexts.

Archive
Wild Culture at the Venice Biennale, 2013
London Art Fair 2013
SNAP Festival 2013
Outsider Art: Where did all the outsiders go?