Finding The Truth Where It Hurts

Category
Suffering & Violence
Architecture & Planning
Research
Finding The Truth Where It Hurts
by Herbert Wright
Published: Apr 07, 2018
Standfirst
An exhibition at the ICA in London showcases an independent research agency "dedicated to the pursuit of public accountability through scientific and aesthetic means."
Body

A composite of a physical and virtual reconstructions of the internet cafe in Kassel, Germany, in which the murder of Halit Yozgat occurred in 2006. Image: Forensic Architecture, 2017.

To understand how a prison guard could stamp on the head of a prisoner in a closed cell without entering it, it’s necessary to visualise the architecture of the cell’s door.

The prisoners in Sednaya Prison, near Damascus in Syria, are kept in perpetual darkness, but they are aware of a rectangular aperture in the door near the floor, because that’s where the meagre food and water ration comes through when it opens. And it’s just big enough to stick a head into, as Samer, an inmate did when told to by the guard outside. That’s when his head got stamped on. ‘I tried to pull my head in but my cheek got stuck’, he says. ‘Then he (the guard) started jumping and stomping, jumping and kicking. Blood started flowing all over the floor. The pain and the humiliation were unbearable. And then he left me, almost unconscious’.

Samer’s testimony can be watched in an exhibition called ‘Counter Cultures: Forensic Architecture’ at London’s Institute of Contemporary Arts (ICA) until May 6. He was lucky enough to survive one of the most notorious of the Assad regime’s secret prisons, and end up as a refugee in Turkey. Thousands of political detainees have almost certainly died in Sednaya. The only photographs of the massive three-winged modern building are aerial ones. That’s why Forensic Architecture, the research organisation that is the subject of the ICA show, have been building a detailed virtual version of it with architectural and acoustic modelling, based on the recollections of ex-prisoners. Contributing to the joint investigation with Amnesty International, Samer and others have sat next to a modelling expert who turn what they say into 3D graphics on a screen. Their collective testimony helps build a blueprint of something the Assad regime deny the very existence of.

Analysing films shot at sea, the researchers try to bring clarity to disputed accounts about an NGO’s boat . . .

Denial, distortion and lies have long been tools used by the state. When you can’t trust the official version of events, only the evidence can take you closer to the truth. It’s what drives the work of Forensic Architecture, which was set up by Eyal Weizman and is based at Goldsmith’s College, London, where he is Professor of Spatial and Visual Cultures. Since 2010, Forensic Architecture’s evidence-based investigations have been reconstructing violent events around the world. The ICA show presents some of their work — on cases as diverse as a murder in a German café to a mass abduction in rural Mexico.

The show starts with a long wall of dense text and pictures, which is basically a primer on counter forensics. It’s such a big read that taking it all in feels like absorbing an entire college course — which it pretty well is, the content coming from an actual MA in Forensic Architecture course at Goldsmiths College. Reaching all the way back to the origin of the word ‘forensics’, it jumps to the early 20th century when modern forensics emerged, and police forces applied it in the field and the laboratory, providing evidence that the state could use in judicial proceedings. 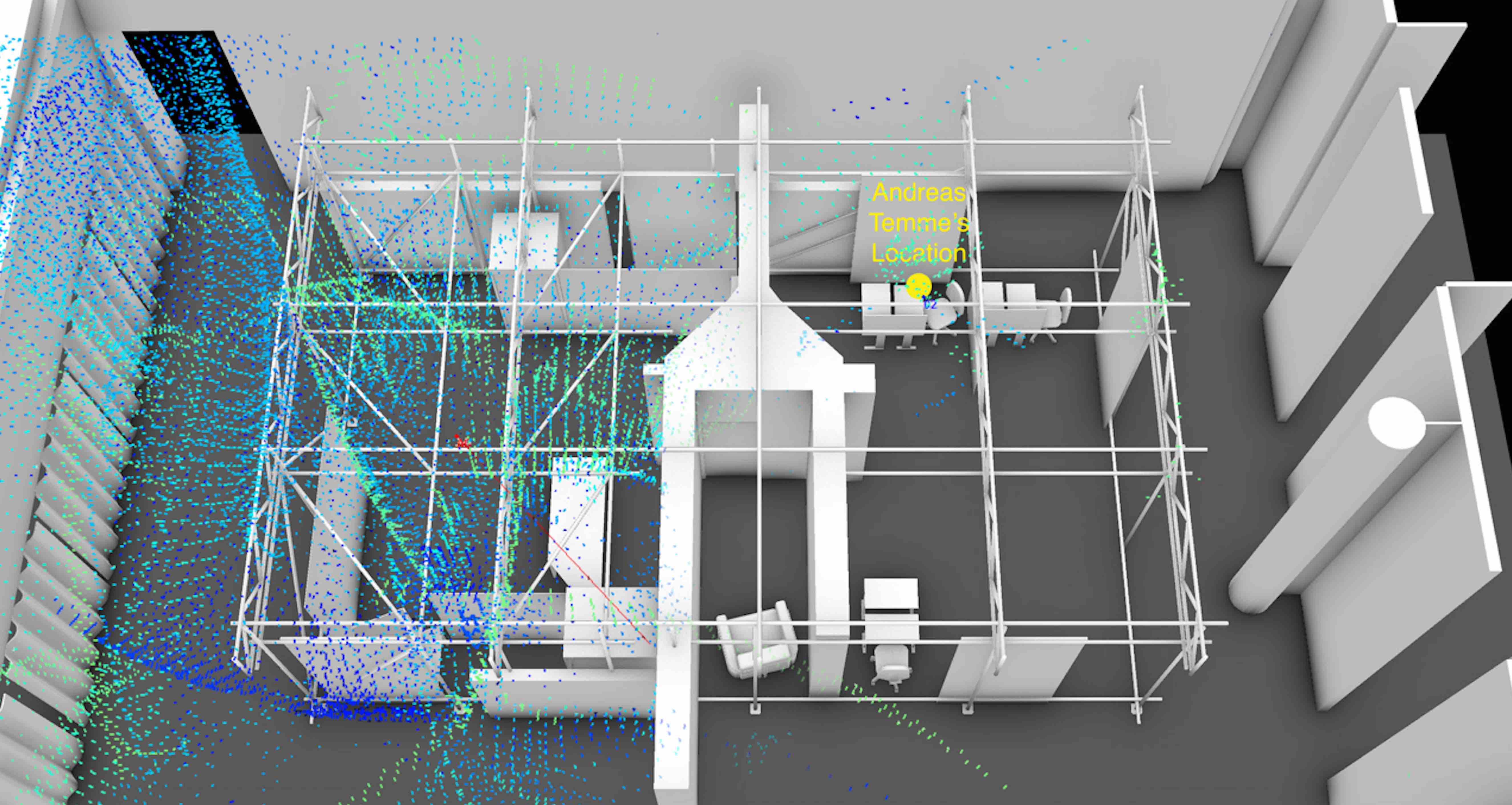 The introductory wall continues with sections covering the topics Forensic Aesthetics, Operative Models, Image Data Complex, and the Architecture of Memory. The introduction may be daunting, but even dipping in and out of it will give a wider perspective than any episode of a TV crime drama involving reconstruction, such as CSI.

When you move on to the individual cases on display, the exhibition is often — quite frankly — harrowing. The ICA have committed a lot of space to the show: it extends over both the institution’s galleries and also the theatre space. Beyond a film about the Forensic Architecture/Amnesty International work on Sednaya, there is a multi-screen presentation, spatial models and text about their ‘Forensic Oceanography’, scrutinising the plight of migrants crossing the Mediterranean. Analysing films shot at sea, the researchers try to bring clarity to disputed accounts about an NGO’s boat and the question of where responsibility lies when the rescue of migrants at sea is evaded, involving players such as the EU, Italy and Libyan Coast Guard.

The main gallery includes a detailed analysis of what happened in 2006 in the 77-square metres of an internet café when a Turkish immigrant was killed by neo-Nazis, raising questions about the presence of a German provincial intelligence officer there. Other cases include a reconstruction of a 2014 Israeli bombardment in Gaza. The Upper Gallery brings cartography to the fore in the 2014 Ayotzinapa (Iguala) Mass Kidnapping, an examination and reconstruction of the hijacking and attack of 43 students by police in Mexico; the events over one night are as surprising as they are disturbing. 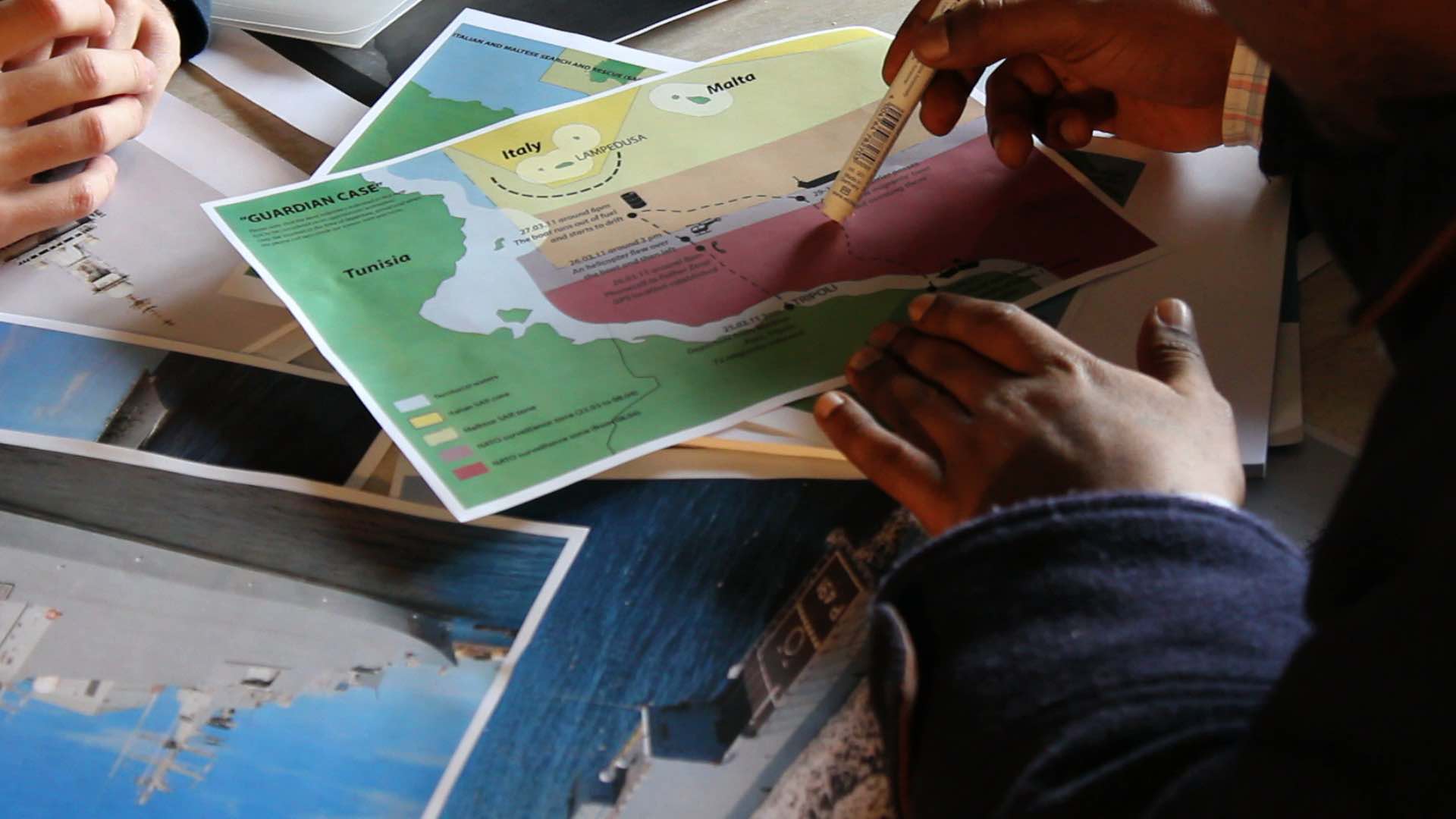 Interviewing a refugee boat survivor in 2011, researchers use an early sketch of the chain of events map to help him recall what happened. [Forensic Oceanography, 2013.]

All events have always happened somewhere over some specific time, so all events are defined by space and time. In this show, space and time are the keys to how all of these cases are presented. For instance, an event's space-time field is unknown precisely, except where a photograph or video pinpoints it, or a recollection suggests it. So, a photograph, for example, freezes the spatial organisation of things during an event which are visible from the angle the camera is pointing, at a particular moment on the event’s timeline. Thus, the data gleaned from such evidence enables a reconstruction of the event's timeline, and enables the configuration of people and things across or within the space of the event — which can range from a room or from a region.

The ICA show is epic, but it presents only a fraction of Forensic Architecture’s work. For example, their work has taken on not just violence against people, but ‘ecocide’, meaning environmental destruction, too. They have provided evidence on the burning Indonesian forests and peatlands that annually generate more CO2 emissions than major industrialised countries do; and, has been related to the palm oil industry and the territorial cleansing of indigenous people. That would have been good to see at the ICA just to show the scope of Forensic Architecture’s work.

For the ICA, it’s an unusual move to go outside of the world of art. Forensics may be an art in the wider sense of the word, but it’s not the art of the art world. Art often claims to seek the truth, but so does empirical investigation such as Forensic Architecture’s, and in a more literal way. The art of artists can and should provoke, but in the cacophony of wildly diverse output and the distortions of taste trends, and a globalised art market, provocation is muted or lost. In a way, stepping outside of that into an area of practice that is investigative and empirical makes the Forensic Architecture show a return to the radical post-war roots of the ICA itself. (Initially set up in 1946 as an alternative to the mainstream Royal Academy, the ICA became a leading force in London's avant-garde. For example, hosting the Independent Group which helped seed British Pop Art, and from the 1960s being the first to present provocative counter-culture figures across diverse fields, such as artist Yoko Ono, film-maker Lars von Trier, and philosophers Jaques Derrida and Slavoj Žižek.) 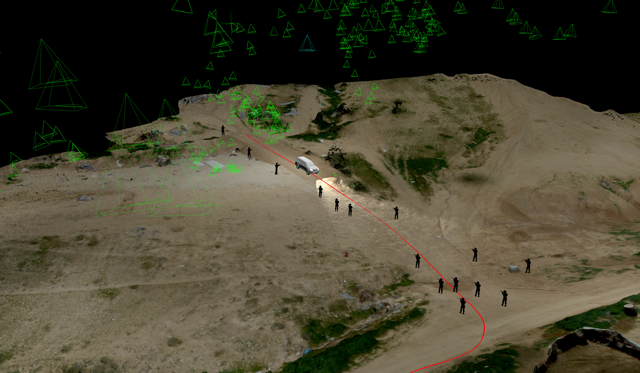 Photogrammetry and 3D modelling reconstruct a scene in which an Israeli policemen and a Bedouin villager were killed in 2017. Terrain slope, speed, and distances are calculated at each moment of the event. Forensic Architecture, 2018.

In all likelihood, we will always have to live with the evil that seems resident in humanity, and terrible things will continue to happen. Assaults on human dignity, the abuse of power that follows nationalism, and environment destruction are rife — as is fake news. We need to re-appraise the value of truth, because it’s the best weapon we have against such forces.

Forensic Architecture seeks out the truth in some of the darkest, most obscured events of our time, each of which is almost inevitably the tip of an iceberg that is a wider, ongoing situation — but at least the iceberg is identified and marked. So we should be take notice of Forensic Architecture, and take heed of what they expose.

Since the show opened, they’ve opened up a file on the Grenfell Tower fire in which 71 died in Kensington, London in June 2017. ≈© 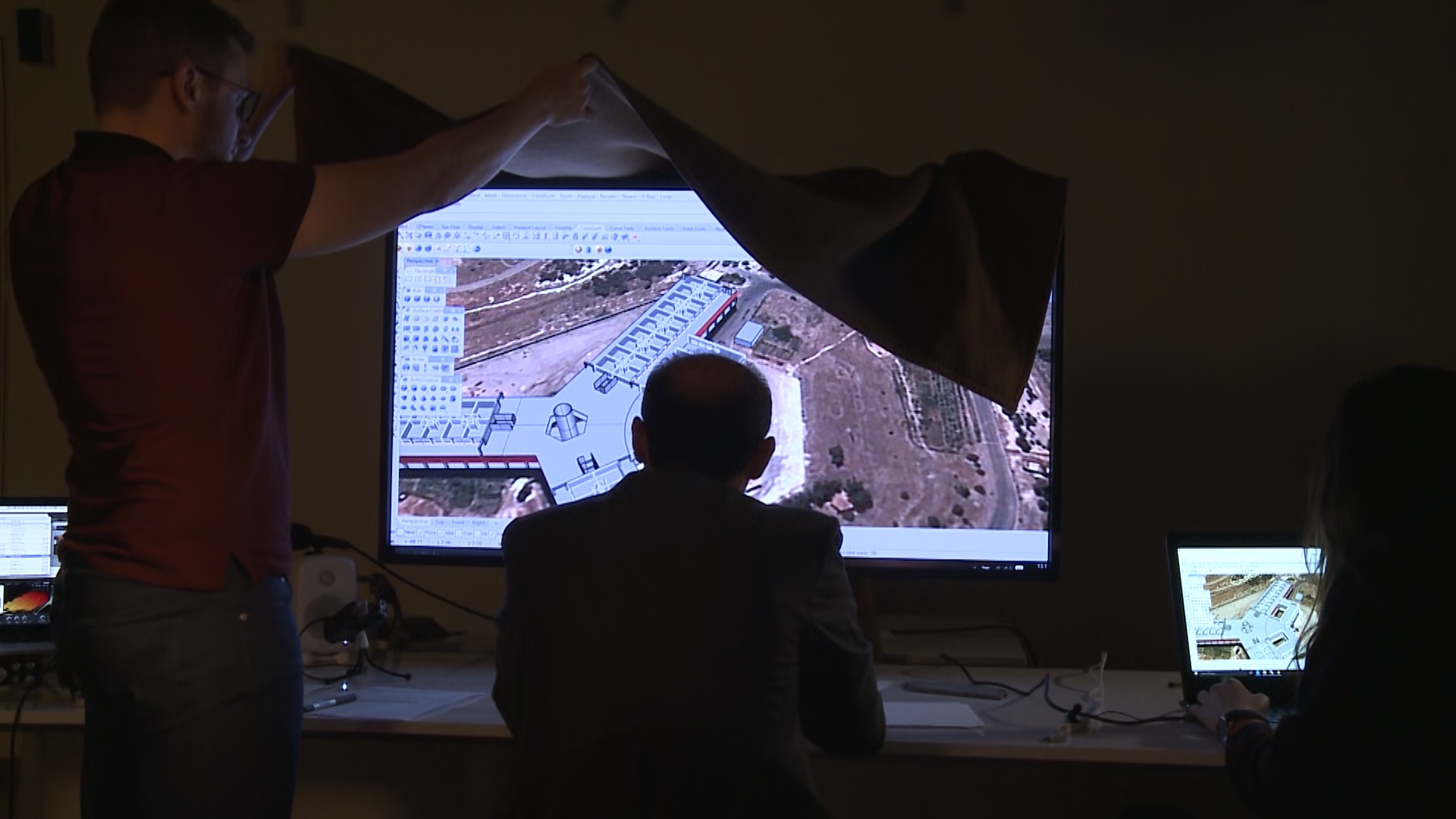 See this New York Times video with evidence of the Syrian government's chemical attacks on its own people, made with the participation of Forensic Architecture.

This is an extraordinary and powerful approach to bringing forward evidence. I'd like to do a version of how the emergence of California as a USofA state in the 1800's, and the Gold Rush, drove the genocide of the native people and trashed the river systems . . .

Finding The Truth Where It Hurts
Institute of Art and Ideas: On Humans and Animals
Death / Doctors, Dissection and Resurrection Men
How we see the built environment
Limits of Knowledge: Death

Institute of Art and Ideas: On Humans and Animals
Death / Doctors, Dissection and Resurrection Men
How we see the built environment
Limits of Knowledge: Death
Cold Medicine