In Pollinators We Trust (or else)

Category
Finding & Foraging
Gardenalia
Bacteria & Bugs
In Pollinators We Trust (or else)
by Angela Lord
Published: Oct 17, 2021
Standfirst
Virtually all of the world’s seed plants need to be pollinated. This is just as true for cone-bearing plants, such as pine trees, as for the more colorful and familiar flowering plants. Pollen, looking like insignificant yellow dust, bears a plant’s male sex cells and is a vital link in the reproductive cycle. With adequate pollination, wildflowers: reproduce and produce enough seeds for dispersal and propagation; maintain genetic diversity within a population; and develop adequate fruits to entice seed dispersers. Angela Lord delves into some of the fundamentals of the plant-pollinator dependence and current research exploring new ways to offset pollinator species loss.

Long-distance migrants such as ruby-throated hummingbirds are threatened by global warming because their winter and summer habitats respond differently to changing climate. [o]

A BUMBLE BEE buzzing from flower to flower is a vital part of a process which has been around for at least 100 million years, according to the dating of a tumbling flower beetle, found preserved in amber, its body dusted with pollen grains.

Flowers are attractive by design, having evolved the ideal shape, colour and scent to appeal to bees, butterflies, moths and other insects, which are offered nectar as a reward for pollenating the blooms. Yellow and orange flowers create a colourful daytime display, while night-scented varieties such as jasmine and flowering tobacco plant (Nicotiana species) have white or pale flowers to attract moths by moonlight.

Flowers that do not produce nectar sometimes resort to mimicry, copying the appearance of other flowers which do. In the case of the bee orchid, the flower’s velvety lip has a different form of mimicry, as its vague resemblance to a female bee encourages visits from male bees. They arrive in the hope of mating, but instead end up spreading the pollen from flower to flower.

These flowers found a way to be more attractive to bees, allowing the orchid to reproduce more quickly while reducing the need to produce nectar.

The flower’s Latin name is Ophrys apifera. The Latin apifera means 'bee-bringing,' and Ophrys is from the Greek word meaning 'eyebrow.' The curved lip of the orchid, which is dark brown with a velvety surface, can be compared to an eyebrow. It’s thought that women in ancient Rome used a pigment from the petals to dye their eyebrows.

Over a long period of time, these flowers found a way to be more attractive to bees, allowing the orchid to reproduce more quickly and easily, while reducing the need to produce nectar. Through a process of natural selection, characteristics favoured by the most effective pollinators became predominant in these orchids.

Many species co-evolve in synch with each other; the more efficient a species is at adapting to its natural surroundings the greater its chance of survival.

Some tropical plants use the strategy of opening their flowers at night to attract moths and other nocturnal visitors. The ripe fruit of the Durian plant, found in South-East Asia, has a strong odour which smells unpleasant to humans, but is attractive to fruit bats, including flying foxes, an endangered species. 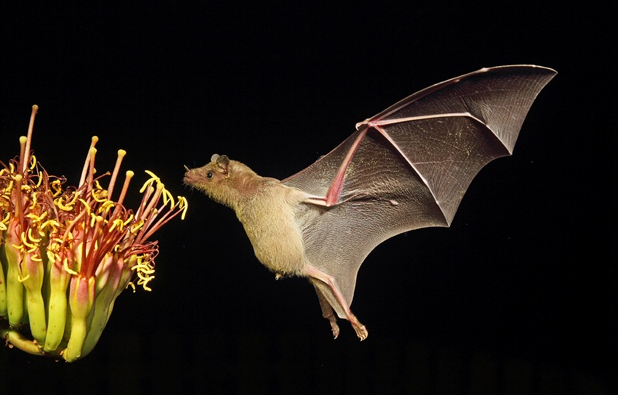 A lesser long-nosed bat feeds on the fruit and nectar of night-blooming cacti and agave. Photo by John Hoffman.

Footage from cameras set up in Malaysia, documented in a 2017 study published in the journal Ecology and Evolution, showed flying foxes pollinating Durian fruit, and suggests that they play a more important ecological role than previously thought. These findings could help to support flying fox conservation projects in Southeast Asian countries.

Plants produce a cocktail of chemicals for various purposes: to create fragrances to attract, or bitter-tasting toxins to repel and fend off herbivorous insects, such as aphids, which feed on plant sap. Sometimes these substances turn out to be valuable to humans, and not necessarily for the original purpose intended.

Traditional healers in Madagascar have long used the rosy periwinkle in medicinal treatments for diabetes. When Western scientists studied the plant further, they discovered two chemicals which, while toxic in large amounts, have anti-cancer properties if administered in small doses: vincristine, which helps to increase the chance of surviving childhood leukaemia; and vinblastine, which is used to treat Hodgkins’ Disease, a disorder of the lymphatic system. 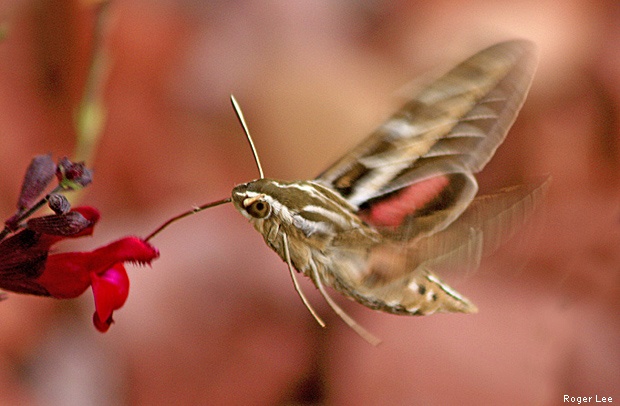 A hummingbird moth, often mistaken for hummingbirds, can remain suspended in air in front of a flower with their long tongues unfurled to feed. Photo by Roger Lee.

According to Jon Drori, author of Around the World in 80 Plants, the discovery may well have saved this endangered species from extinction, as the plants need to be cultivated in large quantities for the pharmaceutical industry to reap the benefits.

Drori’s book delves into the stories behind some rare and exotic flowers but also has fascinating tales about more common plants, like the dandelion, which takes its name from the French dents de lion, lion’s teeth, describing the jagged shape of its leaves.

During the Second World war, shortages of rubber prompted the United States, Britain and Russia to seek out an alternative source. The milky sap in the stems of dandelions, which has a bitter taste to deter insects from eating the plant, is a form of latex. While the common meadow flower doesn’t produce enough latex to make cultivation worthwhile, a larger Russian variety was found to be a better source of the product.

Tiny drones are a possible method, but there's fear that swarms of so-called “robo-bees” would be an ecological disaster.

Natural rubber, which is used in the manufacture of car tyres, is usually obtained from the rubber tree (Hevea brasiliensis) grown around the equator. Transporting from the 'rubber belt' to the rest of the world for manufacturing is a long and costly process, but the Russian dandelion can thrive in many parts of the world, reducing costs and meeting the current trend for sustainable materials. The resulting product Taraxagum™, derived from the Latin name for dandelion, taraxacum, is now being used to make car tyres.

Whether it is for manufacturing, medicine or simply bringing food to the table, insects have a vital role to play, with an estimated three-quarters of the world’s crops relying on natural pollination. Since ancient times, mankind has been giving nature a helping hand, using a small brush to apply pollen grains directly to flowers. This method is labour-intensive, so machines such as pollen dusters and spray dispensers are sometimes used on a commercial scale, but these are relatively expensive and inefficient options.

Pesticides, loss of habitat and climate change are among the factors which have led to a sharp drop in the number of insects worldwide, and the decline in natural pollinators has prompted research into alternative methods. Japanese scientists have now come up with a novel solution: using soap bubbles to disperse lightweight pollen grains. Pollen is added to a soap solution and fired through a bubble gun. Promoted as a low-cost method, it will not damage flowers because bubbles are lightweight and flexible. 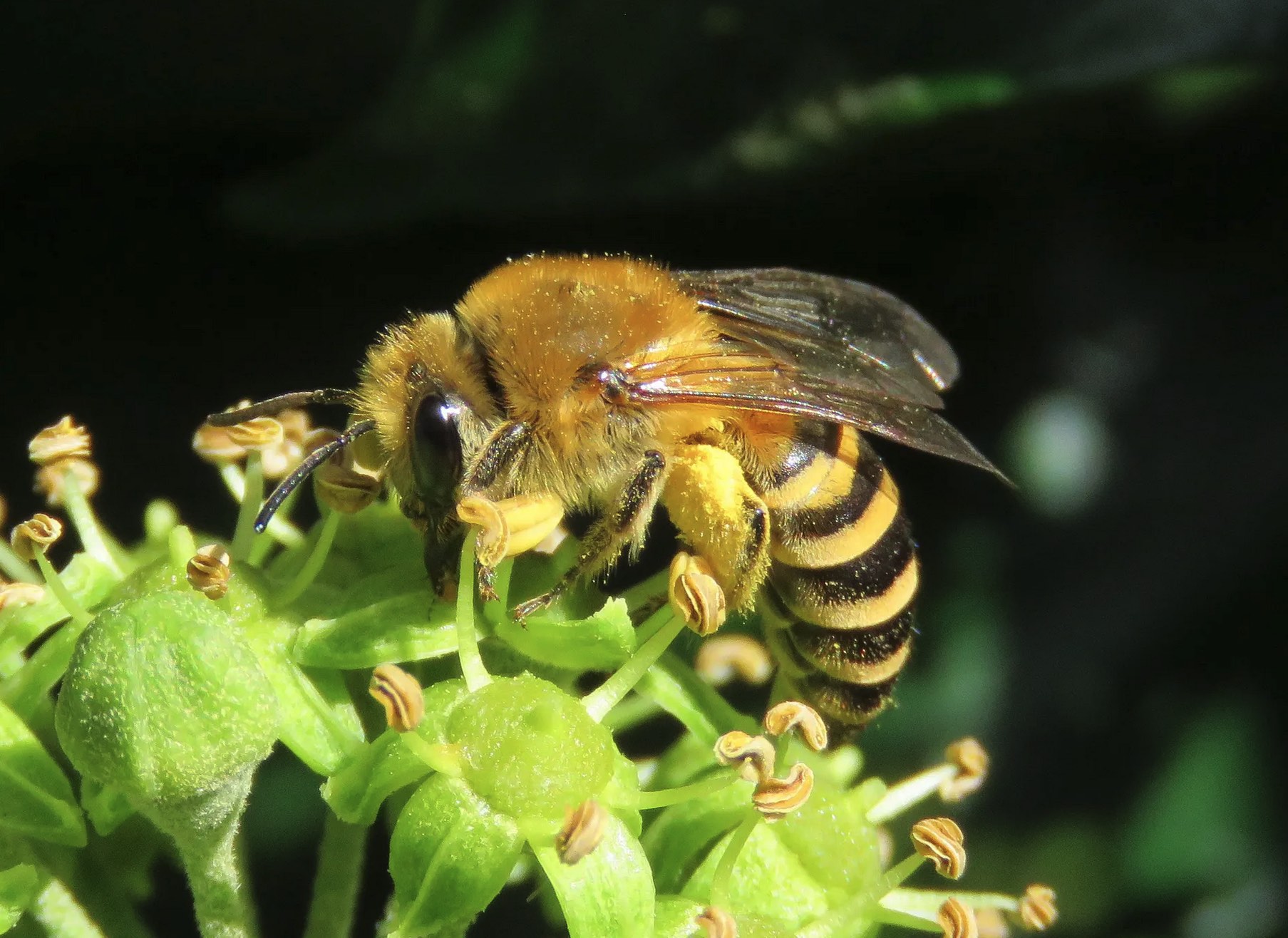 The ivy bee, on ivy, a species relatively new to science, only being first described in 1993 Photo by Steven Falk/Centre for Ecology and Hydrology.

Robotic pollination using tiny drones is another possible method being developed by a research team at Harvard University, but environmentalists fear that swarms of so-called “robo-bees” would be an ecological disaster. According to an article in The Biologist by Alan Dorin of Monash University, Australia, unretrieved devices could pollute the environment with microplastics, leak battery acid, and harm birds if they accidentally swallowed them.

“Creating environments friendly to biological bees,” he suggests, “and exploring the use of other insect species for pollination are more ecologically sound approaches to tackling world food production problems.”

The Bumblebee Conservation Trust offers advice on how gardeners can help by cultivating plants like Buddleia, an attractive shrub commonly known as the butterfly bush. Leaving meadow flowers to grow, rather than weeding them out, creates a natural habitat for wildlife and encourages biodiversity.

Preserving our existing pollinators maintains an integral part of the food chain and supports the delicate balance of the eco-system. Abundant and self-replicating, nature is the only gift which keeps on giving. ≈ç 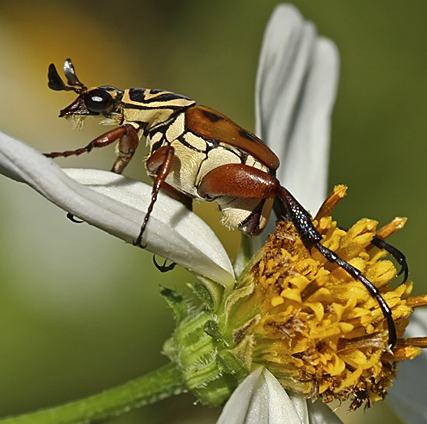 A delta flower beetle feeds on pollen and nectar. Its distinctive coloring and Delta pattern suggest the insect may have evolved to mimic a wasp. [o]