White, Male & Working-class: The Revenge of the Powerless

Category
Dissent
Movements & Communities
Economics & Economies
White, Male & Working-class: The Revenge of the Powerless
by Shariff Abdullah
Published: Mar 30, 2019
Standfirst
As the 2020 campaigns get rolling, it's time to look back on an article we published a couple of months following the 2017 inauguration. It helped us understand some of the things that motivated the type of person who voted to 'Make America Great Again', and who we need to pay more attention to this time around — and for all time. The types of citizens who, writes the author, "[exhibit] social behavior frozen somewhere in their teenage years."
Body

NORTHERN THAILAND — In my first political campaign, in Camden, New Jersey (at 12 years old), I tried to get a black guy named Major Coxson elected Mayor. He was a petty thief and drug dealer, with a flair for style. His campaign was simple: “I'm a crook. If elected, I will steal as much money as possible, for me and my friends. So, you should be my friend!” (It came close to working: he wound up with about 45% of the vote. The guy who won, Alfred Pierce, was “completely outraged” by Coxson’s admissions of criminality. He was “Mr. Clean”: a white, church-going, businessman. He didn't get to finish his term. Pierce wound up in Federal prison on an FBI sting. They both were crooks, but my guy was honest.)

The name-calling, the power plays, the locker room banter, the juvenile sex talk is part of the fact that they’ve never had much excuse to grow up.

There are many other examples in the world of this type of political frustration. For example: the people in Sao Paulo, Brazil who were so frustrated by the political choices pushed upon them by the political parties — who were in collusion with Big Money and the mainstream media — that they started a write-in campaign for “Cacareco”, a rhinoceros in the local zoo. The rhinoceros won. It was a landslide, gaining 100,000 winning votes!

As has been said many times since the recent US election, the real political story is not about Donald Trump. The story is about the people who voted for him — and no, I don't mean the racist, publicity-hungry sociopaths that the mainstream media regularly parade before our eyes as “representative” Trump supporters. Or the David Dukes, the Ku Klux Klan, and all the other publicity whores who have attached themselves to the coattails of the 21st Century’s equivalent of P. T. Barnum.

As a consultant, I help organizations that have challenges regarding inclusivity. Sometimes it is about sexism or homophobia, but mainly it is around race. My “trainees” are usually white, male, working-class and relatively clueless. They are not “racist” in the classic sense of having an overt bias or prejudice against someone based on their race or ethnicity. (Many of them served in the military alongside fellow soldiers and officers who were black, and have stories where they risked their life for a “brother” who was black or brown.) These trainees have a tendency to put themselves down, and put each other down. They have no compulsion about putting anyone else down. It’s just part of the game they play. They are “good old boys”, hard working, hard drinking, expletive-spewing, back-slapping . . . you get the picture. 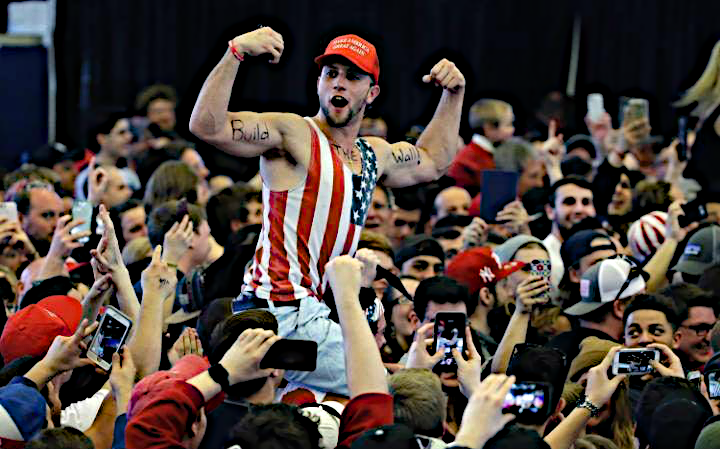 "It happens when I say to them, “You are powerless, and you know it.” Photo credit @

Their social behavior was frozen somewhere in their teenage years. Their cognitive development never made it past high school. The only books they’ve read were forced upon them by the school system. The name-calling, the power plays, the locker room banter, the juvenile sex talk is part of the fact that they’ve never had much excuse to grow up. In the past, they’d get a “good” job out of high school, work in a car factory or in logging, street repair, long-distance trucking or catching fish. They’d marry their high school sweetheart, buy a house, a car and a truck, go out hunting and fishing with their buddies. They have had no reason to grow up — not until they get caught. Most of the time, someone who is not in their “in” group overhears their language and blows the whistle. Then their bosses call me in to put out the fire.

Not an easy task. Most of the time, when they come into my session, they are angry and unrepentant. And, they do not see what is wrong. “Everybody was doing it . . .” “I didn’t mean nothin’ by it — we were just having fun . . .”  Since they put themselves down, they see nothing wrong with putting others down, too. These guys are called “racist” when they copy the negative behaviors that are regularly shown to them. Calling a black person a “nigger” in public is not acceptable. Calling a lower-income white person “poor white trash” is.

When they come into my session, their baseball caps are pulled low over their eyes and they sit bunched together in a corner. The hostility is palpable. I’ve got about 20 minutes to connect with them or the whole day will be lost.

Their hostility begins to evaporate in the first 5 minutes. It happens when I say to them, “You are powerless, and you know it.”

The backlash that Trump successfully exploited was sown when “political correctness” dictated that all of the sins of our society be laid at the doorstep of powerful white men. 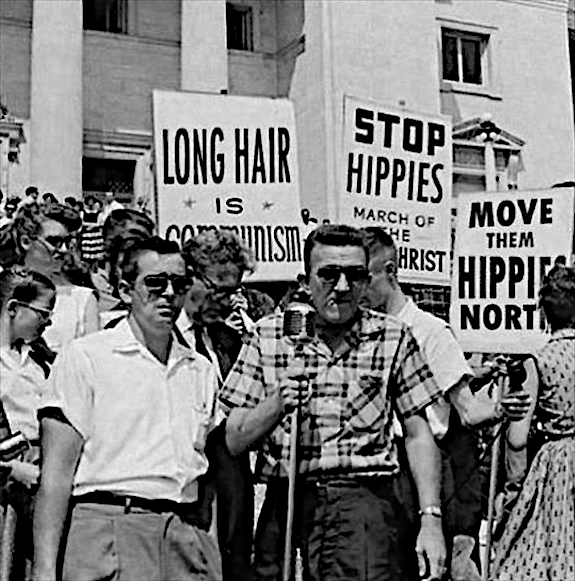 Historically, the young white male voter has empowered himself through a variety of causes. Photo credit @

Don’t get me wrong. Racism exists. In fact, it’s alive and well in 21st Century America. And whites have been the primary beneficiaries of the imbalance of power and resources in this society. There really are powerful white men in this society.

But not these guys. The Left says that my good ole boys are part of the “White Power Structure”. They know they are not. They feel stigmatized and they feel their lack of power and resources. They are told to be tolerant of people who have no tolerance for them. They know there's a game going on, and they haven’t been part of it. They have said to me, “How can I get concerned about the welfare of some ethnic minorities, when it’s my butt on the line?” These guys are in trouble and they know it. They sense their jobs hang by a thread, and that the “economic recoveries” touted on the news never seem to trickle down to their level. They see the Left focused on every interest group but theirs. They feel, and have felt for too long, that they have no one to advocate for them.

Now they think they do. And, when the Trump Administration implodes under the weight of its own hubris and contradictions, and when the lives of my trainees have not improved . . . they will look for someone else.

SHARIFF ABDULLAH consults with organizations and businesses on what he calls 'heart-centered inclusivity' and a society based on a vision of “A World for All”. His work is informed by his inclusive spiritual practices, his growing up with racism and generational poverty, his legal background as an attorney, and his experiences in over 120 distinct cultures in 44 countries. Shariff's books include The Power of One: Authentic Leadership in Turbulent Times, Creating a World That Works for All, and Practicing Inclusivity, a self-guided training workbook.

This article published previously in The Journal of Wild Culture on March 5, 2017.

Great to hear these thoughts

Great to hear these thoughts

Great to hear these thoughts and observations aired so honestly, simply and clearly. For some time, I have been saying to myself almost every morning, "It's not Trump, it's the people who voted for him. They're the ones who need our sincere support and acknowledgement, rather than our scorn and rejection." I do believe that what's happening in the US today is the result of our having forgotten the true meaning of "We the people . . ."

You hit the nail on the head

You hit the nail on the head

You hit the nail on the head Shariff.

Our global education system in the last 100+ years has failed the world; it has not been holistic in a way that can teach the young to know thyself first, and then know about nature, to be creative and resilient, and then to know maths and sciences.

Add to that, when there is no rite of passage to adulthood, we are left with men who are still little boys inside.

Shariff, thank you for this

Shariff, thank you for this

Shariff, thank you for this article. I would like to add one additional piece to the puzzle: the white "working class" (defined as whites without a college education) is suffering disproportionately from "deaths of despair"-- suicide, drug overdose, and alcoholism (Anne Case and Angus Deaton, “Mortality and Morbidity in the 21st Century,” 2017). This is the only American demographic group whose morbidity fluctuates in inverse proportion to the economy, and the only group in which morbidity is currently rising. It's also interesting that studies of psychology for adherents of the alt-right (P. S.. Forscher & N. Kteily, “A Psychological Profile of the Alt-Right,” 2018) show them to be more optimistic about the economy than their demographic peers. It is my hypothesis that the white working class, more than any other, has been bought into the false religion of materialism. They're told they are privileged, but they're losing economic ground as our economy shifts to foreign factories and factory farms. What they SEE is that they're losing ground to non-whites, though in fact it is the rich of all races, though they are predominately white, who are making the big score, according to Census Bureau data.

White, Male & Working-class: The Revenge of the Powerless
Democracies in Exile: A Blueprint for Dangerous Times
Orwell's Rising Star & Democracy in Exile
Tear Gas and Rainbows: Citizen Protest & Resistance in Turkey
'Are Women Nasty?' & other questions from a history of injuries

Democracies in Exile: A Blueprint for Dangerous Times
Orwell's Rising Star & Democracy in Exile
Review Essay: 'Age of Fracture' by Daniel Rodgers
Tear Gas and Rainbows: Citizen Protest & Resistance in Turkey
'Are Women Nasty?' & other questions from a history of injuries