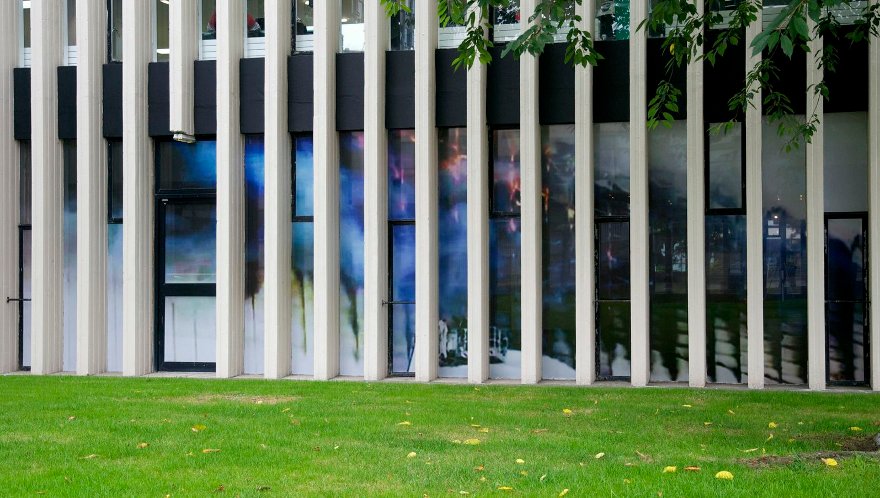 The 'iconic' building sees itself immediately as an integral part of the definition of place: for architectural or engineering ingenuity; for beauty or for ugliness; for functionality or for tourism. In every case, there is a surrounding narrative  that constructs the iconic status, from conception to unveiling, throughout its existence, and ultimately to its demise. The stories of a site, even the ones that elicit bad PR give it a heartbeat and perpetuate its presence, and later, its legacy.

In July 2013, London-born but Newcastle-based artist Eleanor Wright visited Baku, Azerbaijan to explore these very narratives surrounding the newest icon in the city's landscape: the Heydar Aliyev Cultural Center, designed by Zaha Hadid. Soon after its opening in the summer of 2012, it caught fire. Archival footage of this undulating white architectural topography set ablaze creates a horrific and mesmerizing entrancement. It's like watching a car crash happen – captivating until you process the destruction. These images are strangely beautiful. 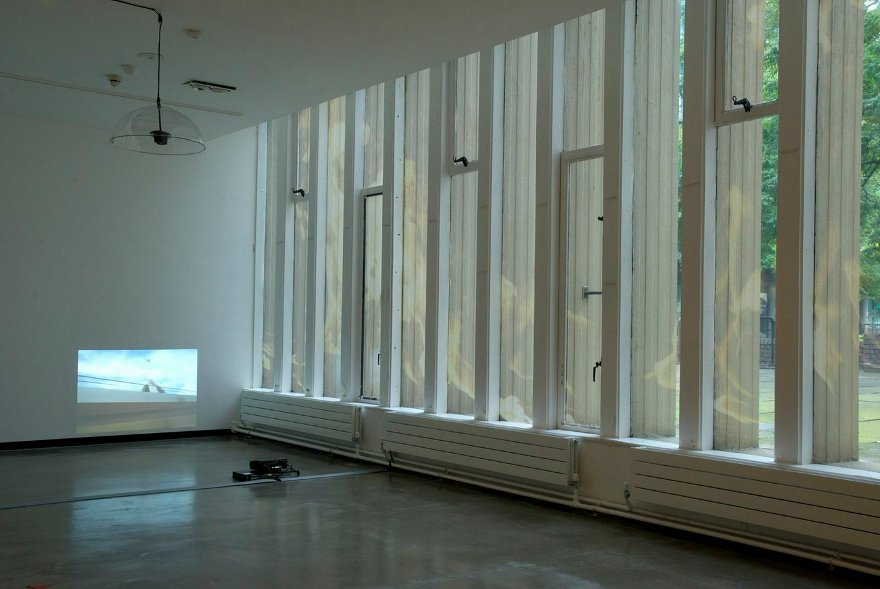 This footage – poetically edited by Wright – plays throughout the artist's ongoing solo show at Gallery North, Northumbria University. In addition, the north and south windows of the gallery have been coated with two stills from the film, blown up three metres high and five metres wide, and printed onto Contra-Vision vinyl. This material – usually used for adverts on the sides of buses – has a dramatic effect when viewed from the street but is imperceptible once you're inside the gallery. The disappearance of such a statement is a nice parallel to the fiery event itself. The near-tangible presence of the image to the passing pedestrian echoes the experience felt by the residents of Baku in summer 2012. But then it's almost forgotten, wiped away from memory, only subtly suggested by a pattern of dots on the windows. In a similar way, the damage from the fire was completely repaired and  there is now no sign of the dramatic mishap in Baku. But Wright doesn’t want us to forget: hence the looped footage in the lower right-hand corner of a wall tucked in the L of the gallery hall.

Our desire to control climate is driving us to realise science-fiction ambitions.

This footage is playing as we file into nearby BALTIC 39 for Tuned Cities, a symposium programmed to accompany the exhibition by Ellie Wright and Sam Watson. All three speakers – Mark Dorrian, Natasha Rosling and Richard Whitby – explore the concept of the 'iconic', its adoption as branding device and its relationship to the utopian/dystopian threads in contemporary architecture.

Dorrian, Professor of Architecture Research at Newcastle University and Co-Director of the art, architecture and urbanism atelier Metis, draws upon his fascinating article in the current issue of Cabinet Magazine in order to investigate how our desire to control climate is driving us to realise science-fiction ambitions like the construction of a Ski Palace in Dubai. Meanwhile, artist Natasha Rosling presents a disturbing meditation on the journey to a psychological place where her installation was sited, and artist Richard Whitby speaks about his latest endeavor for Focal Point Gallery in Southend on Sea. Whitby has been researching The SS Richard Montgomery, an American ammunition ship that ran aground during World War II. The ship still lies off the coast at Southend, and is constantly monitored to prevent the explosion of the live ammunition that it still carries on board. Whitby's proposal is that Southend on Sea reclaim this catastrophic sculpture that sits in front of the town, barely perceptible from the coast line, and makes proper use of to its 'iconic' potential.

And what of Newcastle itself? Wright points us to the Civic Center. Across from Gallery North, the 1960s modernist block stands proud above the surrounding cathedral spires; its tower capped with a grated airduct-like dome, crowned with a ring of bronze seahorse heads.

In the entrance are two smaller plaster cast seahorses, emulating a kitsch 3D version of the Newcastle coat of arms. Apparently it was placed by a mayor a few generations ago to welcome citizens and pay tribute to the seafaring origins of Newcastle. The haphazard placement has stuck, drawing more importance to the symbolism of the seahorse to Newcastle. Also found on the crest of Newcastle United, the seahorse is incorporated elsewhere in the Civic Center – as crystal pendants on the chandelier, in the carpets, even etched into park benches around the shopping mall. 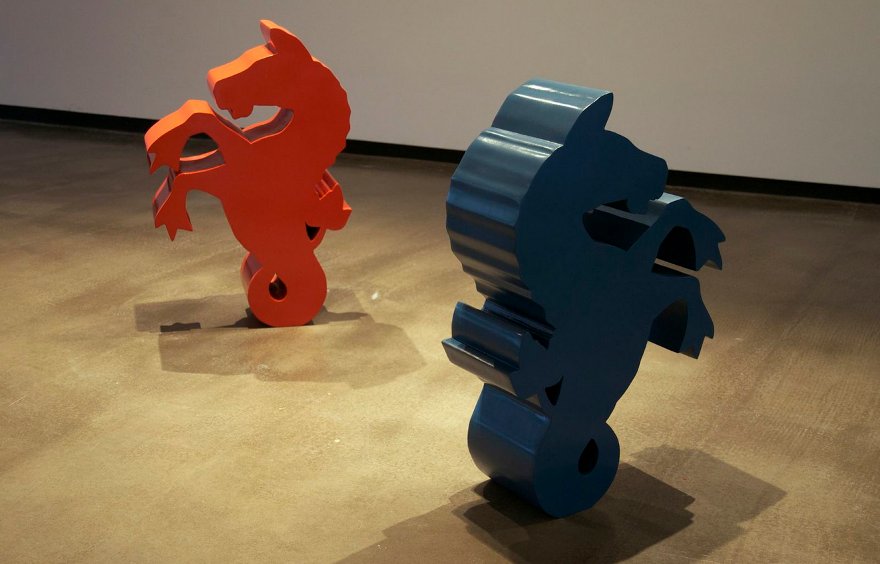 Wright has made a sculptural reproduction of these kitsch seahorses. But hers are stripped-back objects – plain 3D profile and routed out of ply wood, with one coated in teal and the other in amber paint. They look like oversized chess pieces waiting for the the rest of the set to show up so they can start playing. As formal objects, they are striking and satisfying, whilst, in this context, they also restate Newcastle's relationship with the seahorse whilst simultaneously subjecting it to questioning.

Thin Cities is a layered affair, woven with myths and full of memorable visuals.

In previous work, Wright has always been very absorbed by process and the interpretation of form in better understanding materials. Here, she has painstakingly cut two distinct geometric tessellating patterns out of thick PVC. The fifteen metres of material lay in two piles casually placed with one layer slightly overlapping the next to create a new pattern and texture. The thick material releases a strong rubber-like smell and despite the patterns looking ancient or borrowed from an Islamic temple, it comes across as new, fresh – indeed, 'iconic'. The pattern could easily be adapted by the Civic Center to as envelope lining, conference hall wallpaper, or lobby carpet. But Wright has not designed a decorative work; she has edited, and viewers walk carefully around the patterned object, seeing it as a defined undulating pond in the otherwise barren gallery.

At first glance, Thin Cities is an empty and minimal kind of exhibition with an exclusive focus on surface. But it is in fact a layered affair, with complex cuts, woven with myths and full of memorable visuals. We often assume that the iconic is the tallest thing in the skyline. Thin Cities proves otherwise; it is something much more subtle, uncomfortable and potent that defines a place as unique. Like the symposium, Thin Cities acknowledges the potential of the hidden or discreet – an ammunition ship, a roof fire, a seahorse – and encourages the viewer to keep looking to unearth other meanings and to keep questioning.

Julia Vogl is an artist whose social sculpture incorporate public engagement, architectural interventions and colour. She is resolved to create experiences and memories for the viewer, prompting discourse, while creating aesthetically rich works.
www.juliavogl.com