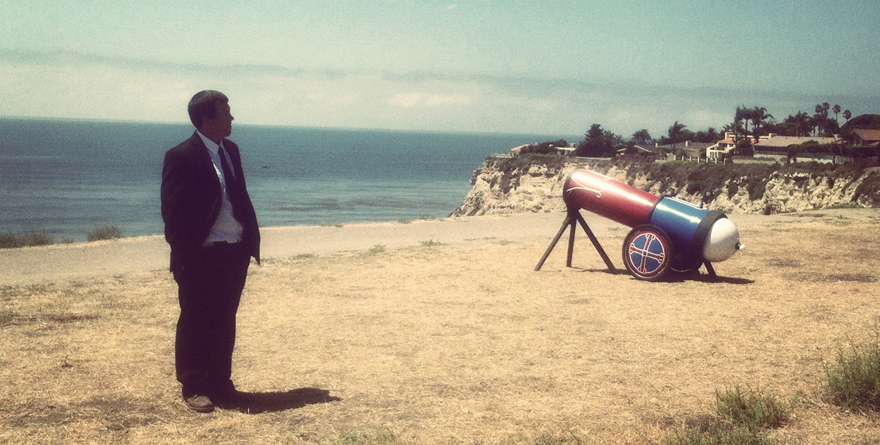 During a Skype conversation with storyteller, writer and moviemaker Guy J Jackson there’s a manic five minutes where technical glitches make it painfully hard to communicate with each other. Once reconnected I apologise for the haphazard nature of the interview.  From across the Atlantic he drawls: “haphazard and completely random is entirely appropriate.” After a considered pause, he deadpans: “In fact that’s probably the best way to approach the subject of Guy J Jackson”.

I never met Guy J Jackson when he lived in London but through personal accounts I’d heard that:

i) He’d once told stories over a tannoy system as bemused-looking models paraded the catwalk at a fashion event.

ii) That he’d been forcibly ‘moved on’ whilst busking stories at the Hay-on-Wye literary festival.

Both accounts are glowing. Further investigations unveil over 200 ‘Light Buoy Films’ productions on his YouTube channel, at least five recorded spoken word albums, a novel about a man with OCD, countless ’zines, three children’s plays and a recent spate of one man shows.  Each successive discovery presents a new collaboration or transgression narrated in a format different from the last, propelled by a seemingly untamable, creative force.   By the time I come to talk to him, Guy J Jackson is an expansive ‘subject’ of near-mythical proportions.

“Is that Guy?” I ask tentatively.

“This is he,” comes the reply.

It’s pretty rare that you can get away with referring to yourself in the third person without sounding like a self-aggrandizing twat, but not only does Guy J Jackson make it sound completely normal, his alter-egos do so too.

When I first broach the topic of the delusive documentarian Ralph Macadam, host of the series British Bits, he responds as if referring to a rogue, distant cousin rather than an invention of his own making.  “Ralph Macadam, man,” he utters breezily. “He’s made some enemies.” The less-than-kind comments are scattered throughout his YouTube channel for all to see: from the ostensibly earnest demand for the documentary-maker to “please get [his] facts right” to the frankly insulting: “is this guy on crack?”. The negative responses are so perfectly, idiotically misguided and Jackson’s enthusiasm for the platform is so indefatigable - “YouTube is just the best thing in the world ever, ever” - that I can’t help but wonder if he hasn’t fabricated his own detractors too. “Those are real comments,” he laughs, then adds with faux gravity: “though Ralph wouldn’t tell you if he was making fake ones”.

It’s not just Macadam who incurs hostile reactions from the public. Fuelled by “the erroneous, unfortunate, rather pie-in-the-sky notion that to busk telling stories would be a good plan” Guy J Jackson set off to various arts festivals around the U.K only to find, to his stark disappointment, that the whole of the British Isles weren’t like Speakers’ Corner. Busking stories just didn’t work at all. Still, despite being heckled as the laziest busker ever, being asked “do you realise you’re driving people away?” and fearing he would get electrocuted when water-balloons were thrown towards his mircrophone, he couldn’t let go of the idea. “I just couldn’t stop doing it,” he repeats disbelievingly, as if temporarily bewildered by his own masochistic inclinations.

I wonder if the sheer unfeasibility of the idea perversely fed into his need to keep trying it and he admits that the “sporadic moments” when it worked were definitely part of the allure. “It was absolutely fascinating for the writing process because I would stop speaking if no one was paying attention and rewrite what I’d been saying.” Whilst he still reels at the mortifying embarrassment of being asked to move on, his busking experiment wasn’t a completely thankless undertaking.  “I did make friends and fans, even, when I was doing it and I was asked to do a show at Resonance FM. So there was some good that came from it. Like the rest of life: 50% misery, 50% positivity.”

In turn, recording his radio shows at the Resonance studios led to a fortuitous meeting with his most recent collaborator, “the eternally charming soundmaster” Robin the Fog, with whom he made “Notes on Cow Life” (The Fog Signals, 2012).  “Cow tipping is done for fun,” Jackson announces laconically on the title track, “but they’ll trample you back. To be trampled by a cow is an embarrassing death”. It’s more than a little reminiscent of his short film Zero Cow (2008) which heeds:  “Zero cows will investigate you to death [..] It’s a sad, dumb way to die.”

So, does Guy J Jackson harbour some kind of long-standing, irrational fear of the bovine? Does he hate cows? “No,” he protests. “I like them! I kid with the cows, you know. I give them a hard time.” This playfulness is a form of affection; an affection, it materialises, that stems from the new.  “You’ll have a tough time finding a roaming cow in America,” says the Alaskan-born author of Notes on Cow Life.  But we shouldn’t take our free-roaming cows for granted he warns: “factory farming culture is something that we’re passing over to you.”

When he moved to Britain, it wasn’t just the snooping cows that captivated him; everything was different - to use his own phrase - right down to the doorknobs.  “I loved filming in England. I was so fascinated with seeing things, so of course that helped me make a lot of movies. Every little corner presented me with a beautiful thing.”  He talks about a wall which he filmed outside Holloway Prison with the kind of reverence normally reserved for a great work of art; at first I think I’ve misheard him but later, as I watch the immense, seemingly limitless prison wall form the backdrop of Me V Mur (2008), I’m astounded by its beauty too.

And it all starts to make sense. Whether it’s Ralph Macadam proclaiming that the populous of Margate go to bed at noon and drink Lambrini all day, or Guy J Jackson narrating a story about a man who lives in a mirror-less appartment and fills the sink with blood every time he shaves; there is a rare kind of wondrous absurdity which flows through each story. The constant need to respond to the world around him means the boundaries between ridiculousness and seriousness, prison walls and masterpieces disappear. The literary crowds at Hay may have rejected him, but he wasn’t exactly discouraged; their displeasure somehow marks the scale of his ambition. His sights are now resolutely set on Hollywood where, he excitedly explains, his first screenplay has been optioned.

If I ever make it to LA I hope I get to see the products of Guy J Jackson’s imagination, whether it’s a blockbuster horror film on the big screen, a one man show performed at a fringe theatre show or a guided tour of a “haunted insular party town” that he's offered to take me on . If Guy J Jackson ever makes it back to England, he’ll return to Hay and busk one more time, by (un)popular demand. “When it finally works”, he swears, talking as all of his personas at once, “it’s gonna be golden".

I wrote a comic novel about

I wrote a comic novel about

I wrote a comic novel about London Underground busking in the 80′s. I would be honoured to have the first chapter listed in your “Busking Stories” section. I can send you the file or you can have a look at the link below.
Cheers John
http://amzn.to/S3c00N