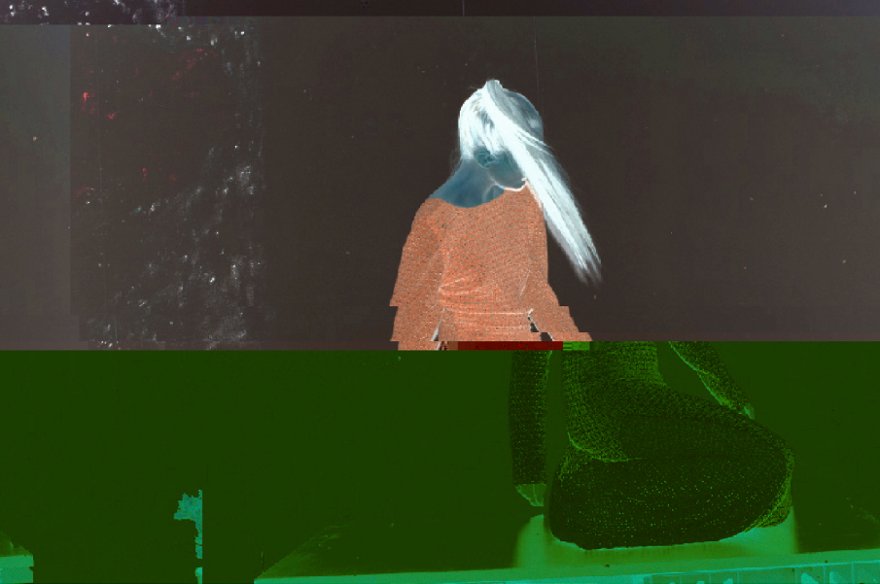 Prodding a fresh engagement with the much heralded New Aesthetic (as coined by James Bridle), Lana Siberie’s latest collection, The Rise of Victorian Reptilians, works to subvert its own romantic veneer. The collection is presented through an unusual lookbook that combines depictions of the garments (depictions artificially tampered) with technologically corrupted files, presenting miscues and transmission glitches in video stills, paper scans, iphone shots, CCTV bus screens and more.

The Rise of Victorian Reptilians shies away from the romantic associations of its pastel colour palette, and embraces instead an aesthetic of the technological. The collection acknowledges the crucial role played by technology – in its own conception, visualisation, dissemination and ultimately, the realisation of its design.

The garments evade obvious categorisation, not only in terms of national character but also in terms of style.

Moving beyond traditional distinctions between original/unoriginal and artificial/natural, The Rise of Victorian Reptilians brings a characteristically romantic tradition into a new technological framework. As such, the romantic character of Victorian design, referenced in the collection through a literal appropriation of accessories such as capelets and bonnets, is paired here with knitted patterns that simultaneously reference biological and technological structures such as reptilian skin and scripting, networking, and communication systems more generally.

The garments therefore evade obvious categorisation, not only in terms of national character (being produced in Russia, inspired by both British and Russian histories, and referring to the Chinese calendar) but also in terms of style: the collection re-appropriates the romantic crochet into an aesthetic of haphazard and somewhat manic technological dissemination.

Maya Tounta: Who are the ‘Victorian Reptilians’?

Iulia Filipovscaia: That really expresses two interests coming together: my interest in Victorian times and fashion and an aesthetic interest in the appearance of reptiles. The former manifested itself in the appropriation of Victorian accessories such as capelets and bonnets, which, albeit transformed, feature recognisably in the collection. I was originally attracted to the daintiness of clothes from that period; the fact that they had a playful relationship to their own function, almost like props facilitating some kind of role play. I wanted to maintain that characteristic in my work.

In terms of the reptilians: well, 2013, the year this collection came out, also marked the year of the snake in the Chinese calendar. But the more important reason for my engagement with the theme was that it enabled me to use a brighter, shinier, more textural palette that intrigued me, and further enabled me to explore eveningwear.

Maya: What is the age of New Aesthetic? And how does it relate to the collection?

Iulia: The New Aesthetic is a term used to refer to the increasing appearance of the visual language of digital technology and the internet in the physical world. The term was coined by James Bridle at last year’s South by SouthWest and has since gained widespread attention. In fact, my original engagement with the subject was through a show I participated in, back in 2010, dedicated to Baudrillard’s explorations into the self-expressive potential of objects or lack thereof. Later in 2012 I had an office job, which meant I was surrounded by technological objects, and it wasn’t long before I started noticing and documenting miscues, transmission errors and the like, which in many ways, I saw as expressions of a technological unconscious, to use Dona Haraway’s term. This idea of a machine being capable of producing the metaphorical equivalent of a Freudian slip, was very appealing to me. More importantly, it brought into question the supposed unreality of the virtual world; in other words, it made the seemingly unreal seem far more real to me. So, I started collecting such images and that grew into my ongoing project ‘On Failure’ which features in the collection’s lookbook.

Art and fashion have always come together, but the two are also distinct, at least in terms of use.

Maya: So, you're a trained artist?

Iulia: Yes, I have a Bachelors degree in Fine Art from Central St Martins and a Masters in Image and Communication from Goldsmiths. You can argue that in terms of my education, I'm probably more of an artist than a fashion designer. I must say though that I don’t fully subscribe to one or the other; you know… I just make things.

Maya: Do you see art and fashion as outlets with distinct potential?

Iulia: Of course. I mean, on the one hand, art and fashion have always come together. A few years ago, Issey Miyake made the cover of ArtForum. On the other, I’d say that fashion is distinct at least in terms of use if not purpose. To use the words of Claire Wilcox: “Fashion is a handicraft that has to work on the body”. As such, “it has a different intention”. Don’t get me wrong, this doesn’t mean that I see utility as denigration. To the contrary, I see the specificity of its function as provision for new outlets of negotiation. If you compare 'On Failure' to the 'Capsule Collection' in terms of how they negotiate the New Aesthetic, you can see that the former has an almost documentary function, taxonomically arranging technological miscues, and recording them, whilst the latter introduces objects as agents in a technological context.

I’ve always thought knitwear has unique potential, in part because of the potential for subversion.

Maya: Let's talk a little more about the make up of the clothes. Why crochet?

Iulia: Well, I’ve always thought knitwear has unique potential, in part because of the singular identity it’s maintained through the years and the potential for subversion this entails. I like the tension implicit in producing labour-intensive garments that leave the skin exposed. There’s an element of luxury being highlighted in that – “statement over practicality”, that I like.

Maya: I hear you've already sold most of the items in the collection. Congratulations! What are your plans for the future?

Iulia: Thank you! I'm currently looking to create a line of jumpers that feature embroidered imagery from religious iconography. I'm particularly interested in creating tactile, noticeably three-dimensional clothes and am currently in the process of researching production methods that would enable me to do that. 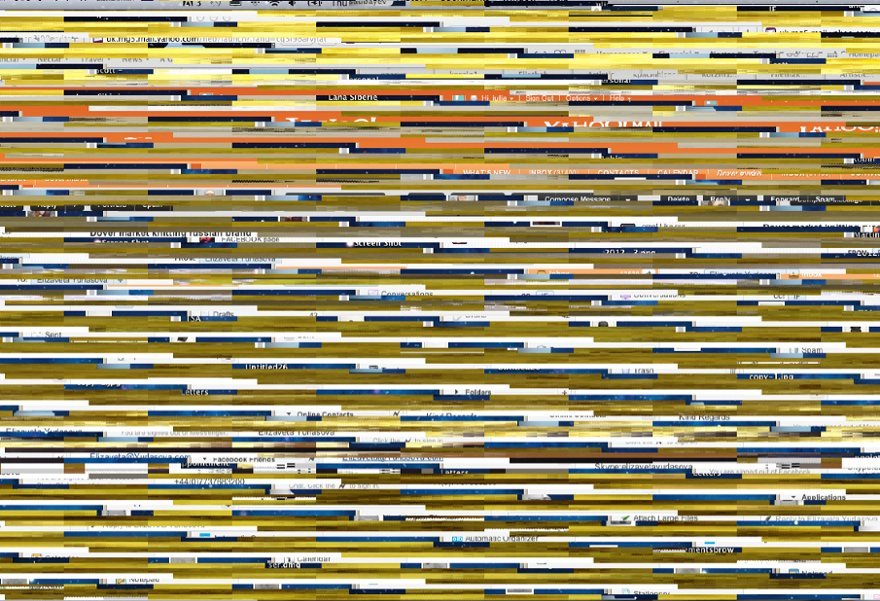 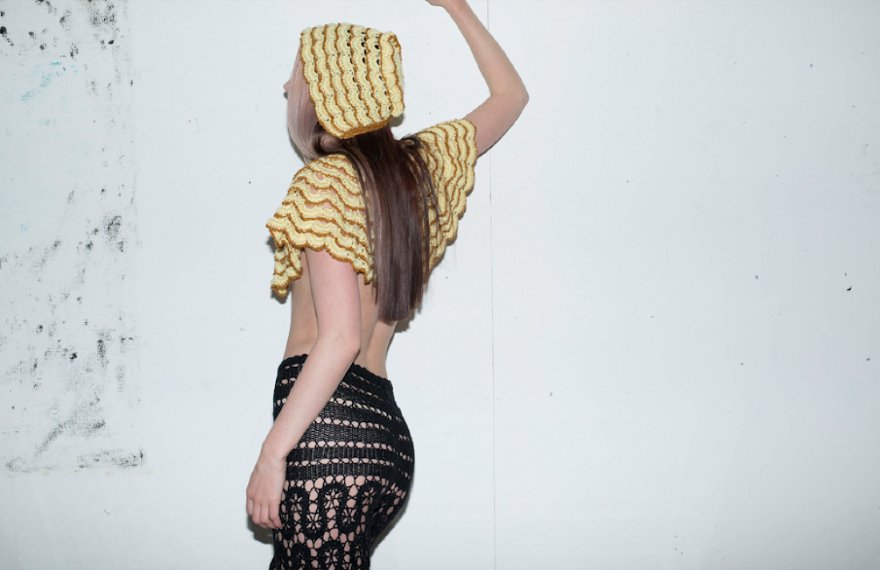 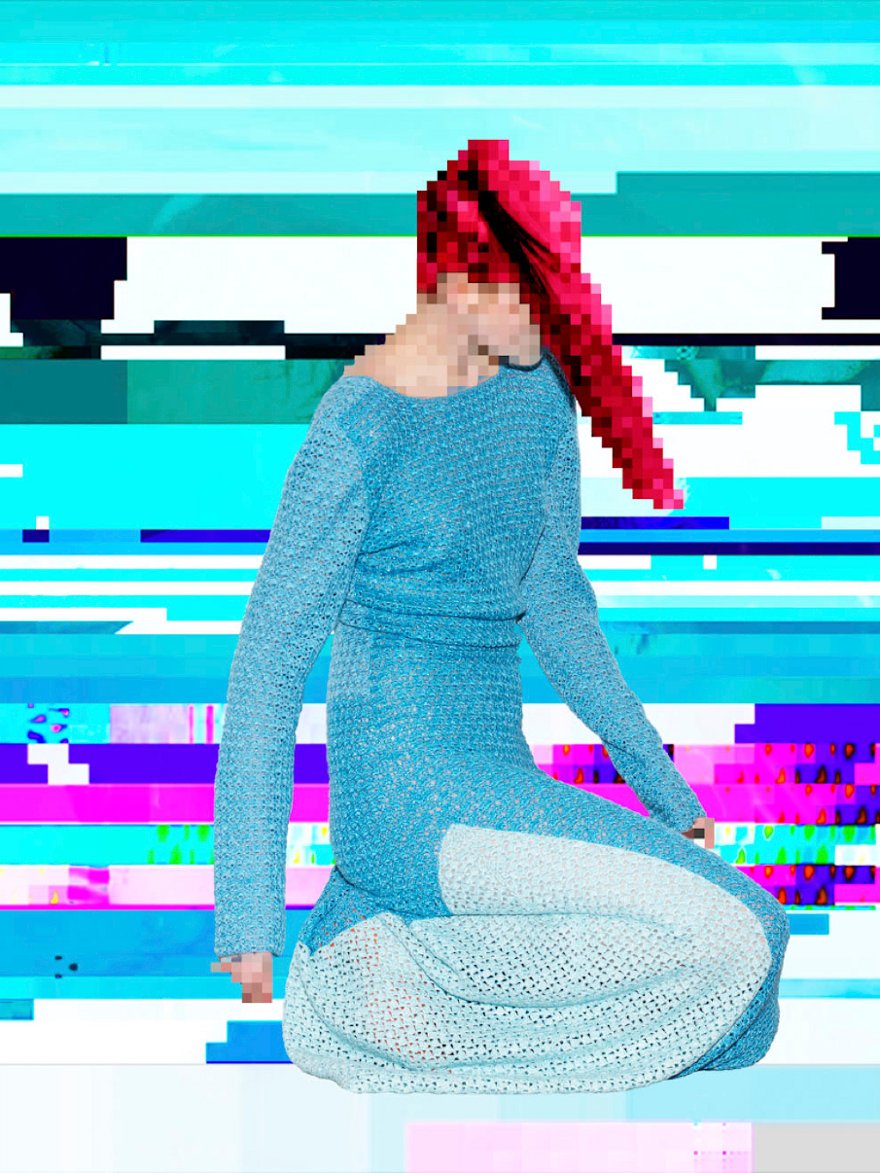 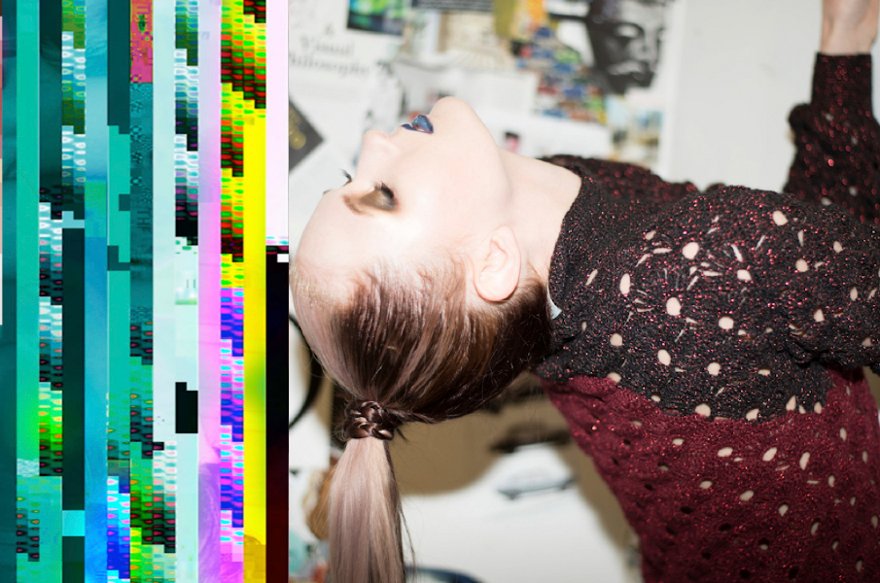 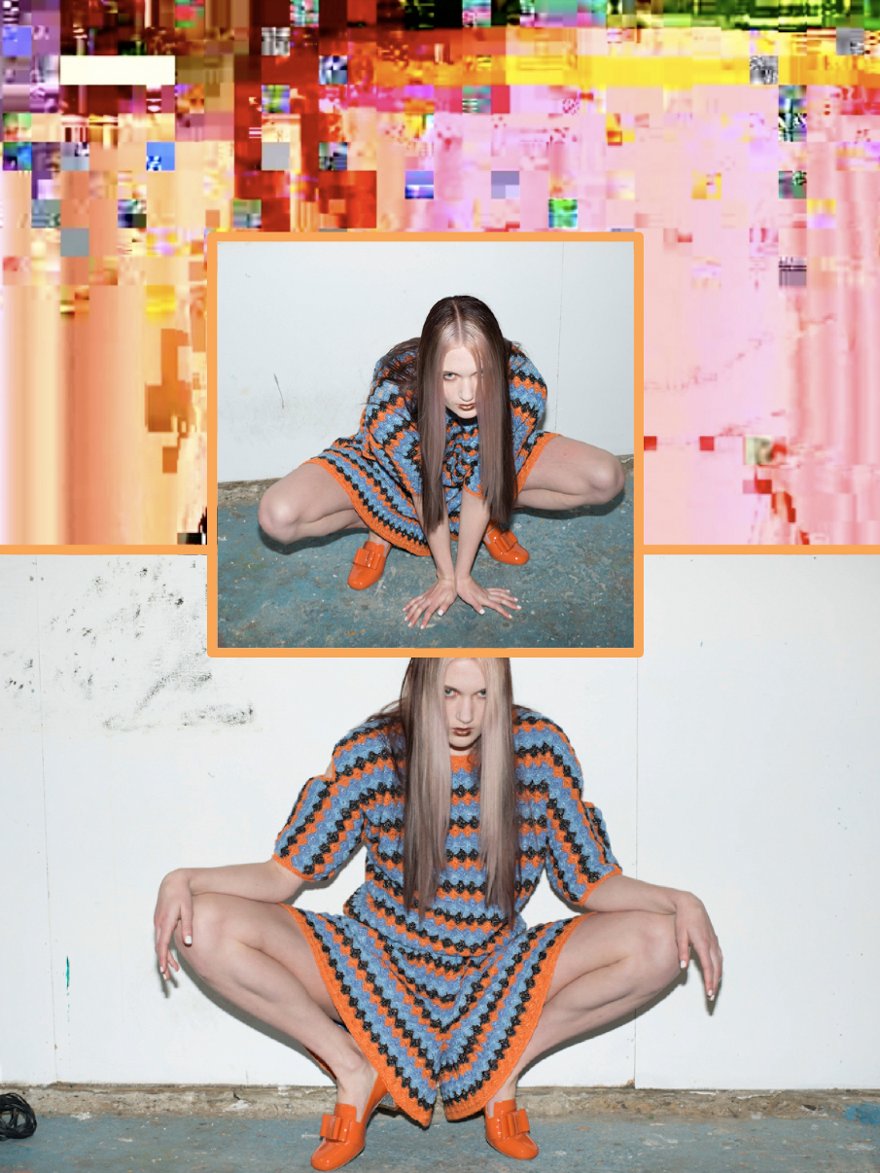 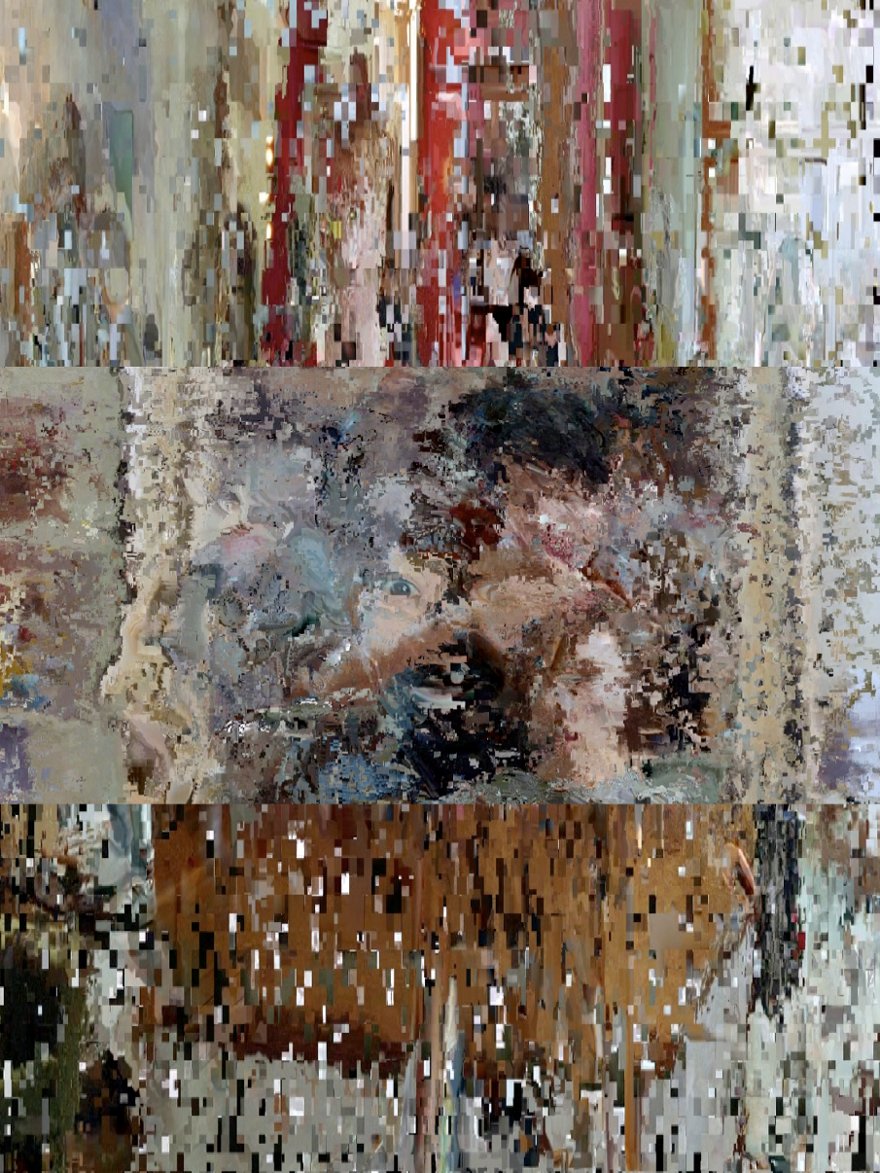 Lana Siberie - Reptiles, Crochet and the New Aesthetic
Pattern and Form - an interview with Hormazd Narielwalla
Inside the Feltmaker's Studio
Superhuman at the Wellcome Collection
Wild Culture Diary - June 2013