It seems natural for those of us born since World War II, or the Depression, to name and challenge the pillars that hold up Western civilization. We have seen them tumble down, one by one: at Auschwitz, Hiroshima, Vietnam, Watts, Love Canal, and the Twin Towers; in Bhopal, Iraq, Afghanistan, and Aurora; with Peak Oil, climate change, and escalating tsunamis, hurricanes, earthquakes, and glacier melts.

But Lewis Mumford, born in 1895, came of age at a time when citizens of industrialized nations were swelling with pride over the streamlined possibilities of mass mechanistic society. In his day science and democracy seemed about to usher in a permanent era of peace and prosperity. Despite the sinister forebodings of World War I, still, popular attitude championed innocence and faith. Mumford, though, had the insight and courage to pierce through the veneer and stand among America´s prophets. He revealed the deeper patterns of a civilization in terrible trouble.

A writer of the clarion call to halt the current madness and pull the world out of fire.

In his four-part Renewal of Life series, he asserted, against all prevailing belief, that technology did not lie at the dividing line between our animal ancestry and the first sparks of human consciousness; rather art, music, ritual, and language did. In his two-part Myth of the Machine, he explored what he saw as the central template of Western society: the Megamachine. Warning that “a dominant minority” — the masters of science and technology — could create “a uniform, all-enveloping, super-planetary structure, designed for automatic operation.” He saw “humans cut off from their own resources for living, feel(ing) no tie with the outer world unless they are constantly receiving information, direction, stimulation, and sedation from a central, external source.”

Although I had been introduced to Mumford´s work in 1968 in a course in urban studies at the University of California/Berkeley, it was not until I was seasoned by a goodly succession of social-change movements that I became worthy of the sweep of his intelligence and imagination. When I rediscovered him, I found myself stopped in my tracks. My battle cry, and that of a host of warriors and visionaries of my generation, was a reiteration of Mumford´s passionate assertion, written so many decades ago: “Progress indeed!” 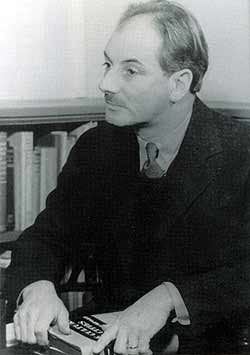 Inspired by Whitman, Emerson, Thoreau, and the Scottish town planner Patrick Geddes, Mumford advocated a de-emphasis on technology, a return to human values and scale, and able planning of villages and cities. He was an ecologist and a bioregionalist before such words came into popular use. And he was, to quote social critic Joseph Epstein, “a writer of fresh possibilities, of green fields and blue skies, of the clarion call to halt the current madness and pull the world out of fire.” 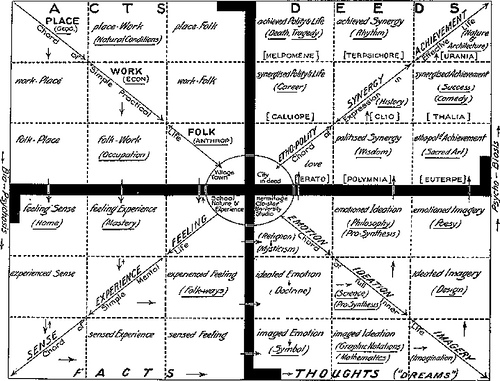 ‘By creating we think, by living we learn’ — Patrick Geddes. Geddes (1854-1932), who was a prime influence on Mumford, used his Place-Work-Folk diagram to show that knowledge of these inter-relationships is necessary for the re-creation of city-regions. (Reproduced from p. 161 of Kitchen, P., A most unsettling person (Golanz, London, 1975). Thanks to gardenvisit.com.

There is much to say about Mumford´s achievements. He contributed to American philosophy, urban planning, architecture, and literature. He fought against freeways, skyscrapers, atomic weapons, and the Vietnam War. He was a husband and father. Despite the fact that he did not graduate from high school and mounted a life-long battle to have his work accepted in academia, in the end, he won the 1961 U.S. National Book Award for The City in History, the 1966 Presidential Medal of Freedom, and the 1986 National Medal of Arts. He even appeared on the cover of Time magazine.

Yet he was human. He was self-absorbed and driven, and although his work had profound implications that may be called feminist, in his daily life he was not a feminist.

But the cogent thing to remember is that Lewis Mumford had soul. My God! When ever I read his work, I had to stop every three or four paragraphs and breathe. His goal in life was to merge the intellectual with the passionate, the lofty with the earthy, and this he did  whether he was writing at his wooden desk in Amenia, New York; walking the streets of Manhattan to observe buildings and streets; planting a garden with his wife Sophia; or delivering a speech to graduate students at Harvard.

His was a life of feast.

Sadly, Lewis Mumford´s presence among us has vanished. But if it can be said that a person's spirit lives on in the people he has touched, I am one who carries him with me. And every day he is here to remind me: “Life is better than utopia.”

CHELLIS GLENDINNING is a psychologist and long-time social-change activist. She has written ten books, her latest being a novel in Spanish, Objetos (Editorial 3600, La Paz: 2018), and a generational memoir In the Company of Rebels (New Village Press/NYU Press, New York: 2019). She is currently working on a novel about women in the Chaco War (1932-35). A U.S./Bolivian citizen, she lives in Sucre, Bolivia. View Chellis' site.

This is an updated version for The Journal of Wild Culture of an essay that appeared in The Elmwood Newsletter, Spring 1990.

Lewis Mumford: Last of the great humanists
A Solitary Executioner Clownfrog Wants You to Know She Exists
'Raven in the Stern'
A place to be free, or just be
'Sometimes a wild god'

A Solitary Executioner Clownfrog Wants You to Know She Exists
'Raven in the Stern'
A place to be free, or just be
'Sometimes a wild god'
A Housing Rethink: Lazy Land, The Non-Market & Vienna's Lead