The Loving Ache for Nature: Poems by Lis Sanchez

Category
Prose, Poetry & Poetics
Ecologies
Wildlife & Wilderness
The Loving Ache for Nature: Poems by Lis Sanchez
by Lis Sanchez
Published: Mar 25, 2018
Standfirst
A eery sense of knowledge of the other side, what's raw and alive under rocks or turning inside hidden tide pool crevices, as if the poet has been there, thought them up, or attuned to their radiance from afar. Lis Sanchez shows us what a true ear for counterpoint in nature writing is capable of.
Body

Down shore, another tern
listing on the tidepool tilt,
headless

strung between strands of kelp
at equal intervals,
as though in sympathy with some aborted plan

Knee-deep, the boy clatters his rabble of hermit crabs—

Pink fingers churn and lift the shells to the sun—
their whorls glow like young ears
eyeballs waggle on short stalks,  knuckled legs

Then my shadow darkens
his watercolor hair

Words written on many signs
fall from my mouth,
marring his gladness

Red blossoms savage his cheeks
I’m not even touching them, he explodes,
fists thrashing the water’s face
— a swinging of snot
His shrieks swing like gulls grabbing up small claws
hurling one after another
at my feet

From the bluff, looking down at the bulge—
harbor seals bank like dark cumulus
not rumbling  —  shaking with seizures

as though each creature were clamoring simply for his joy

as though the tide’s roar were his own      endless companion

and the least treasure caught in his fist
worth fighting for?

Beside him I am a grain of sand. 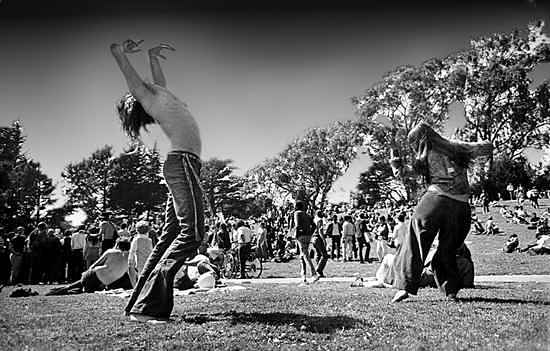 On a clean square of grass
where once a pair of kneecaps
were thwucked out of upright,
picnickers guttle sour pints.
Sunshine washes our face, blisters
some. Smoke trees billow
beside a couple belting out karaoke.
They wear cut-offs; all day they cry
out the same contagious refrain,
Let’s do the time warp again.
Their song rains down on us, collects
like ash in our throat.
We too want to sing, some
of our mouths slip open,
some teeth lengthen.
Sing, some, for the warped time again.
Sing, burnt tongues,
Sing to crack the devil’s knuckles,
Sing, eyes of sheetmetal,
Sing, while your song fills
the ears of forgetful children.
Sing as they kick
a chunk of the old wall
into the gulch. Sing as it rolls,
as it buffets the slope,
stopping where the creek explodes
in black-eyed Susans.
Those in its path are flattened.
Some blaze up.   Sing,
your children are howling.

I was about two and a half years old and was with my father. It was a simple moment, a common one, but to tell it here, now, would ruin my happiness. I’ve been trying to write about it for years; one day, in a moment of deep gratitude, it will flow from my pen. Can I let you know? [Yes, please. And thank you . . . — The Editors.)

My most profoundly felt influence was Judith Ortiz Cofer, my teacher, my mentor, my friend. She was known as a poet, novelist, and essayist — she could do anything. But it was her humility and generosity that took me aback. All writers — hell, all living creatures — need that kind of angel on their shoulder. Godspeed, Judy.

There were a lot of trails near our house in the Bay Area of California, and my brother and I would ride horses alone all summer, through the yellow-grass hills. Later, in Alaska, we ran loose through the woods with our friends; we swam, we ice-skated; we fought rock and stick battles from behind fallen trees. I suppose those experiences made me see the natural world as a glorious playground — but also as a beating heart.

Since it’s a vacation, I would only take books that make me laugh or fill me with wonder. García Márquez’s One Hundred Years of Solitude; all of Flannery O’Connor’s stories; Anthony Trolllope’s The Way We Live Now; Carson McCullers’ The Ballad of the Sad Café.

I loved everything I could do with my body. Everything outdoors. But I had no real focus, unless you count the entire sixth grade I spent trying to score my first joint.

I was thirty years old before it dawned on me.

Absolutely. I’ve been living with Lyme Disease, a tick-borne infection, for twenty-six years. Only in the last eighteen months have I recovered enough cognitive clarity and persistence to work at writing again. Every day that I can write is a gift; that’s the only motivation I need.

One could say I’m preoccupied with my personal battle against Lyme Disease, on the rise due to global warming.

Hmm, I’d have to say it’s about keeping one’s mind unfettered, about being willing to see things in different lights — our imaginative landscape, as well as our earth.

I would ask others, and have them ask me in return:  “How are you, really?”

LIS SANCHEZ has writing appearing or forthcoming in Prairie Schooner, Salamander, New Orleans Review, The Bark, Spillway, Puerto Del Sol, Lunch Ticket Amuse-Bouche, and The Boiler. She is the recipient of Prairie Schooner’s Virginia Faulkner Award for Excellence in Writing, the Nimrod Editors’ Choice Award, and The Greensboro Review Award for Fiction. She lives in Charlotte, North Carolina.

The Loving Ache for Nature: Poems by Lis Sanchez
'Why We Bought this Home', and other poems
A Blanket Over Us — 5 poems by Julia Travers
In John Clare’s Footsteps
Swift- & Gnat-Man Myth

'Why We Bought this Home', and other poems
A Blanket Over Us — 5 poems by Julia Travers
In John Clare’s Footsteps
Gazing in and out to Sea: 5 poems
'They know from the look in the farmer’s eyes': 3 Poems by Pete Mullineaux