Milan's €3 Billion Menu, Eat In or To Go

Category
Eating & Drinking
Architecture & Planning
Ecologies
Milan's €3 Billion Menu, Eat In or To Go
by Herbert Wright
Published: May 21, 2015
Standfirst
At Milan's Expo there may just be a message to save the planet.
Body

Wolfgang Buttress’ concept for the UK Pavilion includes a lush meadow to attract the most vital of pollinators — the bee.

MILAN — 'Touch the Window', read a notice at an optician's in Milan's Via Carducci. On May Day, anarchists did just that. The violent fracture marks they left on the glass looked like bullet holes without the holes. A day later, in a just-built great avenue far from the city centre, a giant deranged-looking orange stops a moment, then moves on, keeping up with a man on stilts in a green top hat.

These events are linked.

Milan Expo has opened, and for both the anarchist and the orange, it's a platform to grab attention and say something. Anarchists (quoted from their graffiti) were saying 'FUCK EXPO', while the fruits and unfeasibly tall show-offs parading through the Expo were saying 'FESTIVAL' and 'FUN!' The Expo itself has a message, summed up in its theme: 'Feeding the Planet, Energy for Life'. And 145 nations are each conveying their own messages as well, as are a few organisations. So, which message is the take-away from Milan Expo?

Expos started with London's 1851 Great Exhibition, and have notably included Paris (1889), Montreal (1967) and Shanghai (2010). They've always had an international outlook (so has the anarchist's trans-nationalist creed). Individual nations compete, like in an Olympics or World Cup, but there are no losers. The competition boils down to who's making the most impact with the architecture of their pavilion, and hopefully the message conveyed within it.

Carpet is set in stone in the ground, and in light beside the door.

Expo also hosts McDonalds and Coca Cola, and China's largest real-estate company, Vanke. That will incite anti-capitalists — but what about the likes of Slow Food and Save the Children, also there? Or the 638-year old Veneranda Fabbrica, who look after the structure of the Duomo, the local cathedral?

Jacques Herzog has dismissed Expos as 'a vanity fair' of nations and 'huge shows designed merely to attract millions of tourists'. This man is worth listening to — as half of the Swiss starchitect practise Herzog & de Meuron, he's designed venues that redefine cities — from London's Tate Modern and Beijing's Bird's Nest Stadium to the soon-to-come M+ in Hong Kong, and Hamburg's Elbphilharmonie. He also masterplanned this Expo. Clearly, his criticism is spot on... except for just one word. 'Merely'. We'll come back to that.

The pavilions mostly parade along the axis of the fish-shaped Expo site, the Decumano. It is 1.5km long, so there's a lot of walking (a bike-hire scheme here would have cleaned up). Architecturally, wood is in, especially beautifully and brilliantly-engineered in the French and Chilean pavilions. Wood has much less embodied energy (and environmental impact) than concrete or steel. Expo structures only need to last six months, but out in the wider world of permanent buildings, wood is also on the rebound as a structural (i.e., load-bearing) material. Expo 2015 gives that sustainable trend a boost. 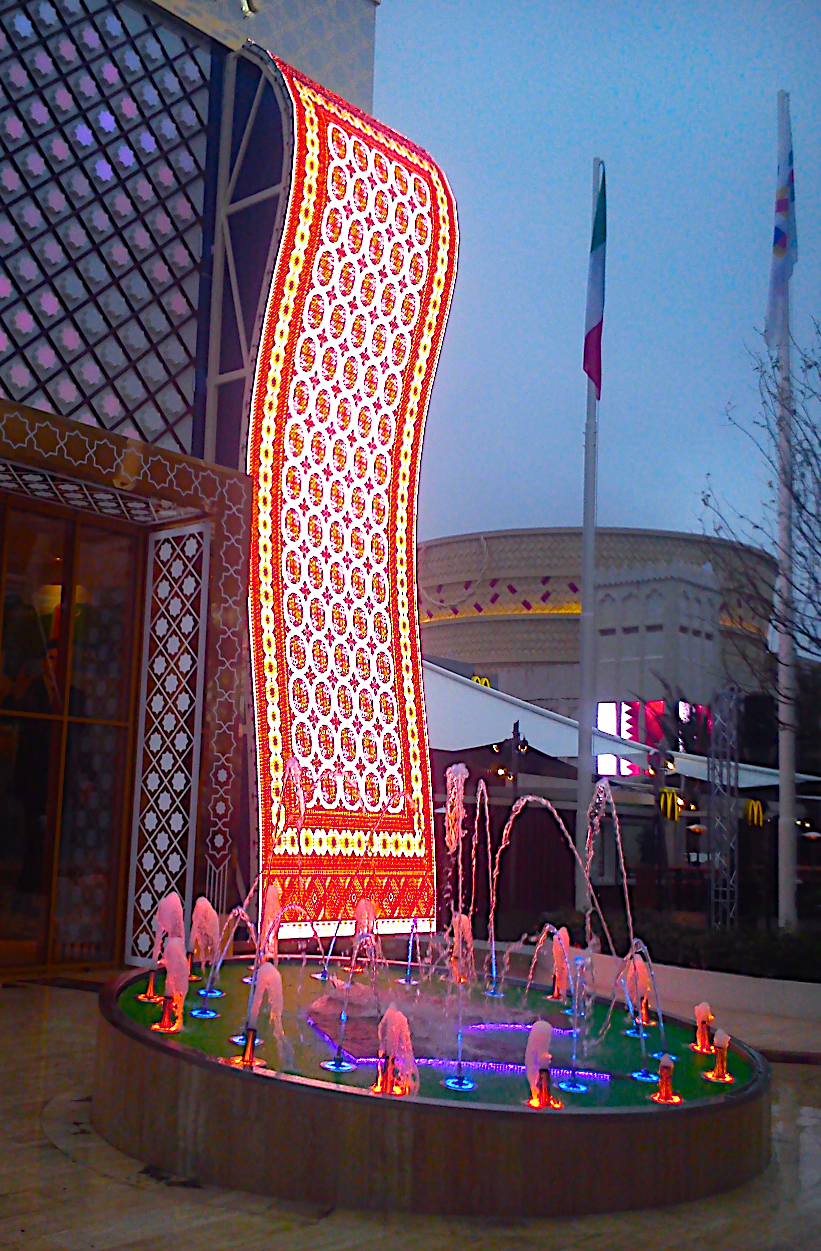 There are some extraordinary 'iconic' forms amongst the pavilions, like China's big wavy roof and Russia's heroic, upwardly curving mirrored entrance canopy. But not everyone is so dramatic or contemporary. Oman's and Kuwait's desert fortresses, for example, look externally like distinctly old-school attractions borrowed from a theme park. Like many pavilions, they spell the country out visually. A personal favourite was Turkmenistan's post-modernist pavilion, where at the entrance, Turkmen carpet is set in stone in the ground, and in light beside the door.

What nations do inside their pavilions ranges from big-screen national advertisements to information-heavy educational displays, to 'experiences' (of which more later). Sometimes it's easy to forget that the Expo theme is food, but many pavilions have restaurants and cafés offering national cuisine.

It's strange seeing McDonald's and Slow Food share the same Expo stage. Slow Food dates back to 1986 when an Italian, Carlo Petrini, responded to a McDonald's opening in Rome by offering homemade pasta outside it. Their philosophy is all about the small producer growing healthy food naturally, and preserving local tradition. McDonald's may serve 70 million a day, but Slow Food is big too. It has 100,000 members in 150 countries, and its initiatives include 1,000 gardens in Africa. At Milan Expo, Slow Food has a village at the end of Decumano that is wooden and designed by Herzog & de Meuron.

The UK Pavilion gently demands a personal re-think about food and the planet.

So, what about 'feeding the planet'? There's a chasm between fast and slow food, between corporate and small-scale culture, between industrialised and organic farming. The latter in those choices may seem like trendy indulgences for the affluent, but actually our very survival may just depend on them. Monoculture farming is not just destroying biodiversity, it's making us rely on a tiny number of plant strains (to feed us and the animals we feed on) that are wide open to be wiped out by disease and climate change. The former is what happened with the Irish Potato Famine, the latter is happening in the Sahel now. And, industrialised farming is also killing off the insects that pollinate plants at the base of our food chain.

No pavilion highlights the issue more clearly than the UK's, and it does it by offering experience instead of screens for film or reams of text. (Disclaimer: I have worked with the UK team, but check anything I say for yourself!) As previously reported in The Journal of Wild Culture, artist Wolfgang Buttress' concept is about the chief pollinator, the bee, whose numbers are plummeting. An orchard precedes a lush stretch of British meadow, leading to an unforgettable solid yet ephemeral structure, the Hive, where sound and light is driven by signals from a real beehive. 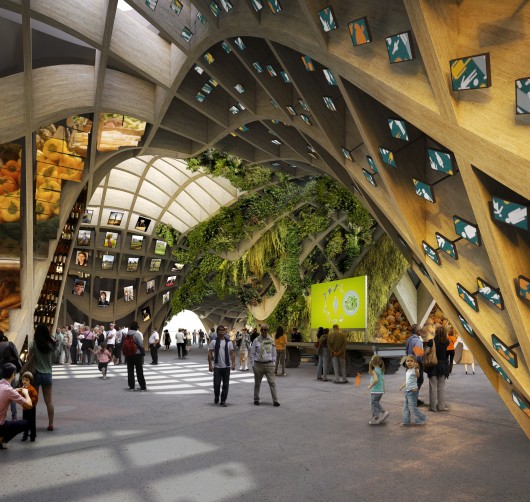 France's pavilion with it's "ceiling-suspended cornucopia of produce."

The UK Pavilion does more than 'merely' attract tourists. It gently demands a personal re-think about food and the planet. That spirit is shared in several other pavilions, such as France's pavilion, designed by eco-architects XTU, with its gorgeous ceiling-suspended cornucopia of produce and video truck messages about food and the city.

Some say Expos are a waste of money, but Milan Expo actually cost Italy just €3 billion (ex-transport links) — one 700th of its GDP. It seems to be already visibly pulling Milan out of recession.

Ultimately, Expos should be a celebration of civilisation and the future. Milan Expo offers a choice about the latter. Herzog and anarchists ignore Milan's big message about rethinking food. But it doesn't stay there... it should be a take-away. 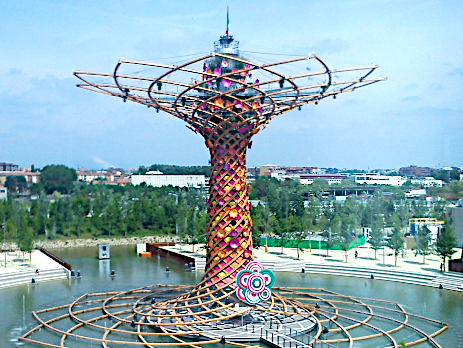 An Expo icon: The Tree of Life by Orgoglio Brescia stands 37m tall.

Photos by the author except for French pavilion.

Milan's €3 Billion Menu, Eat In or To Go
Bridging Nature: The Fusion of Cooking and Ecology
The Wild & the Cultivated in Tomorrow's Cities
Ecosystem
Surviving in the Multidimensional Space of Cognitive Dissonance

Bridging Nature: The Fusion of Cooking and Ecology
The Wild & the Cultivated in Tomorrow's Cities
Ecosystem
Surviving in the Multidimensional Space of Cognitive Dissonance
Wild Swimming in the Thames