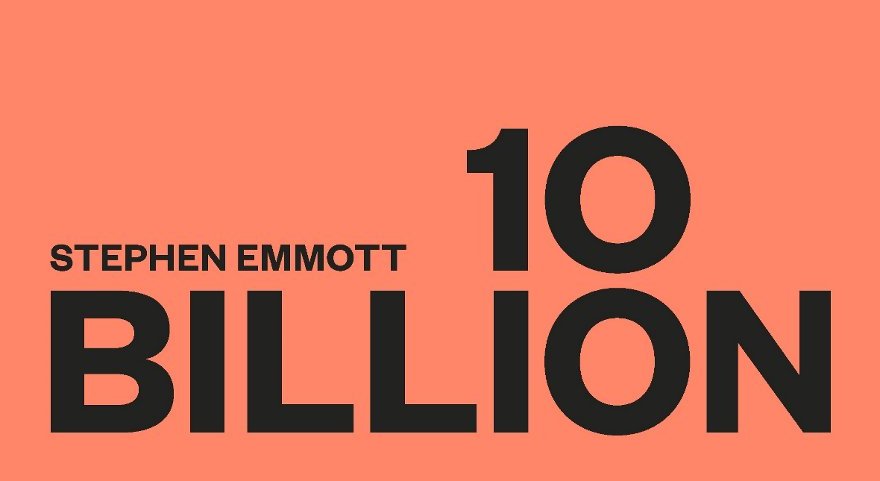 "I think we're fucked," says Stephen Emmott, head of Microsoft's Computational Research Centre. That's his view on the future for humanity, as the population climbs from seven to ten billion this century. He spells out his reasoning in a flourescent orange-covered paperback, 10 Billion. It's a straight-talking overview of how we're trashing the only habitat we have, planet Earth, and why it's too late to make it right.

Emmott is a credible voice. He's a professor at Oxford and University College London. He's worked in great corporations and advised governments. With an education in biology and computational neuroscience, his trans-disciplinary work now encompasses fields from marine ecology to artificial photosynthesis. The latter, like nuclear fusion, offers the hope of a magic bullet to the world's insatiable energy demands, but sadly they're both long shots in the short term.

He uses plain English, sometimes so sparsely it's stuccatto. His stripped-back language is personal and direct. Brevity emphasises points. Effectively. And often, a point is underlined simply by concluding it as a new paragraph. And paragraphs are widely spaced. So much so that a page may contain just a paragraph. Or even a single sentence. But I shan't do that here.

That would look silly.

And Emmott's thesis is far from silly. Like a man in a hurry, Emmott lays out in broad brush strokes the familiar matters of anthropogenic climate change and resource stress. Photos and graphs punctuate the text, the former without explanation. For example, what is that gargantuan hole almost swallowing a town, in the shot labelled merely "Mirny, Russia"? It looks like the entrance to Hell – in fact, it's an abandoned open diamond mine 525m deep. By contrast, graphs come with sources and explanations. One illustrates the 7.5-fold rise in total annual water consumption from 600 km3 in 1900 to today, and projected to be ten-fold by 2025. The graph's line looks almost harmless, but consider this. We consume four litres of water to make a litre bottle of it, and 72,000 to make a semiconductor chip. In facts like those lies the terrible power of the word 'unsustainable'.

Habitat destruction often heralds the arrival of men with guns.

Previously, population pressure and resource stress have not been without solutions. Here's an interesting science-led miracle solution that Emmott swiftly dissects. The post-war 'Green Revolution' boosted crop yields enormously, feeding hundreds of millions that would otherwise have starved. But Emmott points out that engineered crops expended finite biological resources on growing quicker rather than on their natural defences, so we compensated with toxic insecticides; they were shorter so we deployed herbicides to stop weeds taking their light; and they needed vastly more water. We got away with that because the limits to the Earth's capacity for absorbing toxins and providing water weren't reached. Consider, though, the current miracle. The biggest demographic trend recognised today is that education and urbanisation mean dropping birth levels. But they also produce consumer societies, which means resource demand and carbon footprint skyrockets. And if ten billion want to live like we do now in the West, we breach the limits in resources, and carbon-induced global warming could flip to runaway.

Scare tactics? Perhaps, but he breezes through the apparently-viable alternatives, including not just renewables and geo-engineering but the taboo of nuclear (fission) power. Even if they go full steam ahead, they're not enough. There are slivers of hope he doesn't address at all, such as energy-intensification trends (getting more buck for your kilowatt produced, something China sets targets on), or near-feasible projects like asteroid mining. And he doesn't spell out that actually, demographic trends suggest ten billion is around the peak projected population, and then it will fall. But what kind of a world will it be that it falls in?

Emmott even offers a dreadful thought on that score as well. Oddly, it aligns him with some climate-change skeptics, those idiots arrogant enough to think they know better than the global scientific community. The most vocal of those are often American gun lobbyists. Emmott's last line quotes a scientist whose personal reaction to the situation was: "Teach my son to use a gun." I wonder if Emmott saw the irony of a climate scientist talking like a Tea Party-type.

If the line seems melodramataic, tell that to the tribes of desertificating Dafur or across the depleting Amazon. Their communities have already been trashed by humanity's rape of Earth, and they've already experienced the ominous coincidence that habitat destruction often heralds the arrival of men with guns.


Herbert Wright is a London-based writer specialising in urbanism, architecture and art. He is Contributing Editor to UK architecture/design magazine Blueprint and contributor to others. Previously, he has written for magazines covering contemporary and twentieth century art, real estate, technology, and music. Recent work includes contributing to architectural encyclopedias for Phaidon, editing the London ICA website, and articles in journals in France, Mexico and Croatia. Herbert is the author of three non-fiction books about skyscrapers and urbanism.
www.herbertwright.co.uk

Wild Culture Bedside Table - March 2013
Review: Dark Mountain, Issue 3
In the Company of Ghosts – The Poetics of the Motorway
This Once-Proud Land Was Mayan: The Downside of Going Places
A Reflection on Hiroshima