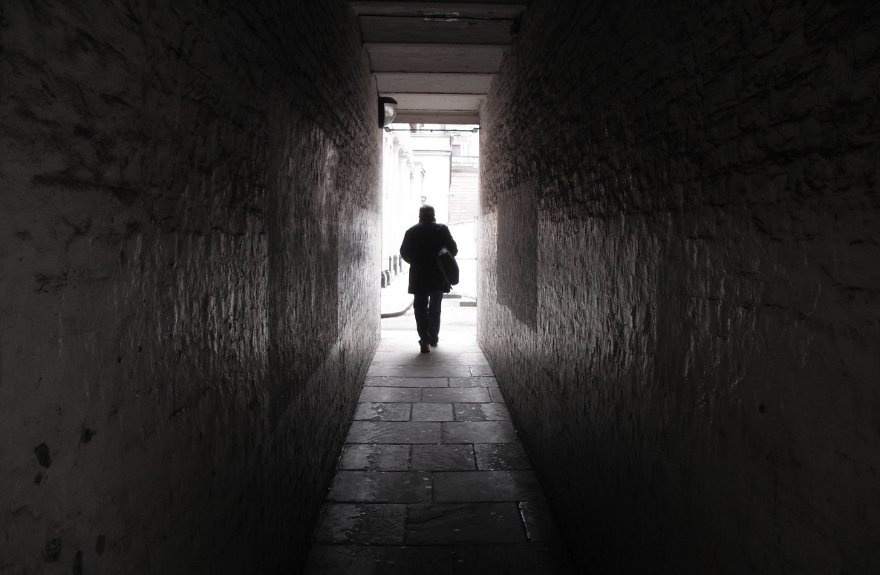 “You don’t have to be religious to be a pilgrim,” the digitally disembodied voice of Tom Chivers assures us, as we drift in single file past St Leonard’s Church in Shoreditch. Still, the poet-cum-maverick-tour-guide makes reference to the building on his audio recording – not on account of its godliness, but because it marks the possible source of our own revered leader: the hidden, subterranean river Walbrook.

It’s two hours before sunset on a grey Saturday afternoon and a group of fifteen lost river devotees are embarking on an urban pilgrimage. We may not be seeking spiritual epiphanies, but we’re certainly out to experience enlightenment of a rare kind. Part historical/cultural research project, part exercise in acute environmental observation, Chivers’ ode to the Walbrook – “ghost and friend of the City” – is an immersive, beautifully executed exercise in urban psychogeography.

The Walbrook, which once flowed through the heart of the City of London, was mostly paved over by the 1460s, but it’s not lost without trace. The clues are still there if you know where to look. Within our first few steps we traverse Holywell Mount on the way to nearby Mills Court; both names alluding to watery pasts. There was a time when London needed all the rivers it could get: for drinking water, powering mills, for tanneries, wharfs and harbours, and for sluicing away waste (as we’re reminded, “river is just a fancy way of saying drainage”).

As a child, Chivers witnessed the banks of the river Effra burst forth in South London; it seems that the latent power of the city’s hidden water sources has inspired him ever since. Chivers’ pilgrimage doesn’t just ask what lies hidden beneath our streets, but urges the pilgrims to feel the pliant walls behind defunct drinking fountains; to look through cracks in the city’s walls, and up through portholes towards the sky as well – and you’d be amazed by just how many skyward-pointing viewing holes the city holds.

Knowledge is not collected as absolute units, but – like algae – grown along the way.

From Richard Serra’s immense freestanding sculpture Fulcrum, which acts as a vast corten steel observatory to the Eastern Cluster’s sky, to the circular opening above the Bank of England’s mysterious thoroughfare, Tivoli Corner, the circle/porthole/ring becomes a recurring motif throughout this (entirely intentionally) meandering performance.

From our starting place in a bandstand encircled by seven old trees in the ever seedy Shoreditch (stemming from Sewer Ditch?), we pass beguiling manholes, circular plaques, mini coliseums and empty ampitheatres. Whilst the financial district is deathly quiet on the weekend, we course through circular plazas amidst construction sites that are in such constant states of flux that even Google’s ubiquitous satellites cannot keep up.

As is only right, the pilgrimage acknowledges the more sinister aspects of London’s history, and that dark undercurrent leads us to No.1 Poultry, an office and retail building with a hollow tower as its central atrium. Since the 2008 credit crunch, four suicidal city workers have plunged to their deaths from the rooftop terrace of Coq d’Argent restaurant, 80 feet above. In characteristically meticulous attention to detail, Chivers (this time in person) speculates on the story that one man leaped whilst still clutching a glass of champagne. It gives a whole new meaning to the phrase ‘high flyer’.

On pilgrimage, knowledge is not collected as absolute units, but – like algae – grown along the way. Certain themes start to take on significance, if only in small increments. As we near the end of our journey, we pass the Parish Church of St Stephen Walbrook, founded on the banks of the Walbrook a thousand years ago. In the final descent to the Thames foreshore where the two rivers would once have met, Chivers draws our attention to the church. This time, he marvels at the religious building's unusual design. As opposed to modelling itself on crucifix-shaped features, this church, fittingly, is heavily spherical, placing worshipers around Henry Moore's altar in a circular congregation. Circles like plugholes, portholes, telescopes, drains...We walk on, the sun completely set by now – we hit the Thames at high tide and walk over wet stones and washed up office chairs to collect our holy water.


Tom Chivers will be talking at the Bishopsgate Institute on 27th March 2013 at Underground London: Lost Rivers: Writing the Psychogeology of London

The Walbrook Pilgrimage was produced as part of a Cape Farewell commission and hosted by the Bishopsgate Institute.
www.thisisyogic.wordpress.com
www.capefarewell.com