Category
Art & Aesthetics
Business & Corporate Culture
Numbers
Widgets Uber Alles: Bizspeak and the Arts
by Anonymous
Published: Jan 10, 2013
Standfirst
A deadly virus infesting the arts community enters by the ears and eyes to take over the mouth and eat away at the mind and soul. By Paul Dutton.
Body 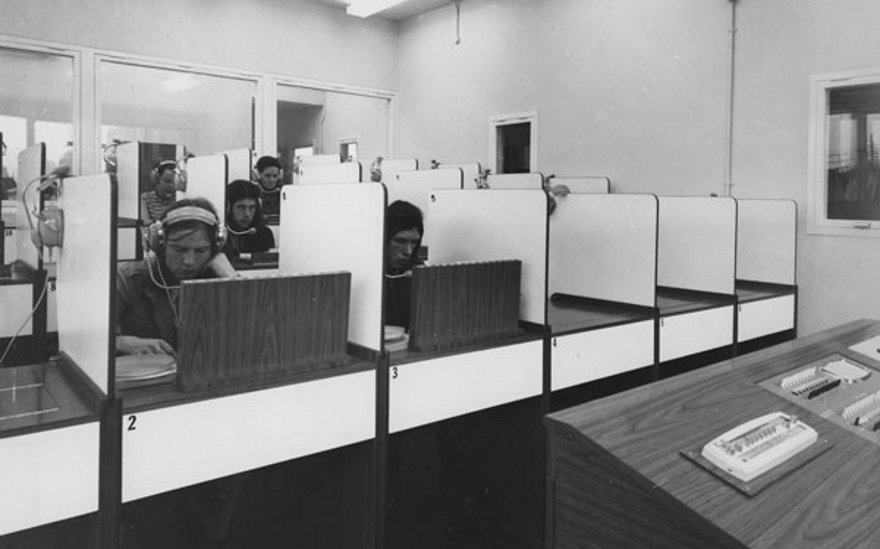 The celebrated, new, young composer, fresh from yet another award, was being interviewed by a CBC host, who asked her what the winning of these several prizes had meant for her. “They really helped me get into the business,” she replied. Also party to the interview was a representative of a Canadian music organization, who at some later point in the conversation made reference to “the Canadian composition industry.”

“Business”? I’ve always understood that to mean briefcases, number-crunching, balance sheets, and a primary focus on things like return on investment, and the bottom line (i.e., the last line on a profit-and-loss sheet, showing how much money’s been made or lost). Getting into a business usually means entering an area of commercial activity, not establishing a reputation in an area of the arts.

“Industry”? I remember when I first encountered that term. It was in Grade 5 social-studies class, when I would read that such-and-such a city’s principal industries were coal, steel, and textiles, or another’s were wool and ceramics. Could it be that children’s textbooks these days identify some cities as centres for the composition industry?

I intend no ridicule of the two individuals in question. The point is this: their comfortable use of the terms business and industry in relation to an arts activity illustrates the extent to which a shift in mentality has taken root within the arts community. Such usage would have been exceptional fifteen years ago, unlikely twenty-five years ago, and utterly unimaginable as little as thirty years ago. Historically, business and the arts have had, at best, an uneasy relationship; and industry and culture (let alone, composition) have been categories irreconcilably separate, and indeed, diametrically opposed. Certainly there has always been business and commercial activity related to the arts and culture, but the theatre producer and the publisher of novels have attended to the mercenary aspects of things, often at odds with the artists, whose focus is that of creative vision. The essential difference between these two divergent, if not incompatible, endeavours was characterized succinctly and precisely by playwright Mavor Moore in one of his Globe & Mail cultural affairs columns of the 1980s. To paraphrase, as best as memory allows: the creative artist operates from the inside out, striving to fulfill, through exploration and discovery, the demands of the spirit; the commercial mercantilist operates from the outside in, attempting to satisfy, through observation and calculation, the demands of the marketplace.

This notion registered powerfully with me—because of its inherent truth, of course, but especially because I was, at the time, supporting my artistic pursuits with full-time employment in a corporate mercantile environment, where I was surrounded by people who said things like, “And then I just fell in love with marketing”; and whose eyes would light up when they realized the sales potential of this or that item: “Now, that is really great! People would really go for that!”—not expressing an enthusiasm for the thing in and of itself, but thrilling to the assessed prospect of the thing being something people would readily buy. Put another way, they sat outside, figuring things out, rather than responding from their core. Successes—one’s own, or those of others— were to be analyzed and repeated. Goals were to be defined and set, and ends were to be achieved through sure-fire systems. As the fiscal year-end neared, sales managers would be as terrified of exceeding the projections they’d made twelve months earlier as they would be of falling significantly short of them. Why? Because inaccurate forecasting, plus or minus, is considered to be bad management, and therefore draws fire from the corporate bosses. Business does not like surprises.

At some point during the late 1970s or the early ’80s there emerged, in the ongoing dialogue between government and arts organizations in Canada the oxymoronic term (I’m being very generous here with my oxy’s) cultural industries. The phrase was used in reference to all arts activities, not just those in the commercial areas of publishing, recording, broadcasting, and merchandising. The term, imported from some biz-admin environment, took over like zebra mussels in the Great Lakes. Soon arts councils were issuing graphs and pie charts with the obsessive rabidity of corporate-training seminar facilitators, attempting to illustrate from various statistical perspectives the “economic impact” of “the arts sector” and the fiscal benefits that accrued to society from the “industry” of culture. The arts found themselves awash in abbreviations like ROI (that’s return on investment—just in case you’re lucky enough not to know) and ASO (arts service organization—ditto), and terms like the multiplier effect, cultural initiatives, and deliverables, along with other biz buzzwords. At the same time, with one wave of a lexicographical wand, artists became arts workers, overseen, of course, by arts managers (who naturally know better than mere artists), and a whole mercantile hierarchy materialized, with—as in any business—the accountants playing a prominent role, dictating from within the arts agencies (try requesting a legitimate alteration to a Canada Council application after it’s entered the processing stream, and see where the arts officer must seek permission—likely declined; hint: the department name starts with an f).

The new terms arrived without fanfare. They seemed simply to sidle up to us and sit down in our midst. I vividly recall hearing a reference to cultural industries in a newscast one evening as I drove home to the solace of culture after a day’s work in industry. I declared irritably to the air in my car that I was sick of hearing the phrase; that the arts were not an industry, goddamit. It was some considerable time later that I realized I had never heard the term prior to that very newscast. In the arts community at large, once the presence of cultural industries, with all its terminological and attitudinal entourage, was realized, it was already too late to oppose it. If anyone thought to object, there was no one to whom to voice the objection. The arts community as a whole capitulated to the imposed terminology, when we should have stood up and firmly rejected it. In fact, there were those in the arts who embraced it. Thus was invented the phrase “poetry markets.” Poetry markets? Can we perhaps, then, look forward to concertos trading on the NASDAQ?

I’ve been told that cultural industries is a term put forth by cultural bureaucrats themselves, as a means of convincing the business-besotted politicians that culture was worthy of funding. If this is so, then the cultural bureaucrats created their own Trojan horse and wheeled it inside their own gates, where out spilled an insidious army of accountants and politicians, the accountants shoving business terminology down artists’ throats, the politicians hacking away at—rather than maintaining—arts funding, all the time demanding that the arts behave more like business, and start making money—even if that meant getting it donated by real businesses. Thus were artist-run centres in Canada sent out to seek corporate funding, which, of course, necessitated more bizspeak.

But there is a still more damaging result of this phenomenon. It is simply this: that the arts, in the purest sense of the term—by which I mean an expression of the human soul and spirit, rather than a saleable commodity shaped to market demands—cannot meet the moneymaking expectations of profit-oriented business, any more than can research in the pure sciences. Put on such a footing, arts organizations, just like pure scientific researchers, are bound to make a poor showing. The poorer the showing, the less deserving of funding, according to the business-run government. And thus does the erosion of government funding continue.

As all of this has played out, I keep hearing the voice of poet Steve McCaffery in an adopted persona for “Mischievous Eve,” a piece by the poetry performance group The Four Horsemen, in which he and I worked together in the ’70s and ’80s, along with bpNichol and Rafael Barreto-Rivera. In this piece, McCaffery, affecting a pernicious, hoarse, demonic rasp and hiss, exhorts fictional co-conspirators in a planned conquest of North American society, to “Get them speaking YOUR WAY!!!” That tactic certainly has proved an effective means of colonizing the minds of not just those in the arts community, but of those in almost every area of human activity. Restaurant chains don’t serve diners, they process customers. People no longer live in apartments, they occupy units. Instead of cows, agri-industry populates its farms with production units (the least of the calamities to befall farming through being converted into an industry). And word has it that in the field of education, schools are no longer filled with students but with clients. To bring it back to the arts, there is, as reported in the Washington Post by country-rock star Don Henley of the Eagles, at least one record megacompany president who refers to recording artists as content providers.

A few years ago, Jocelyn Robert, head of Avatar Audio Studio in Quebec City, declared, “We’re not a business, We’re an artist-run organism,” thereby asserting the processual essence of artistic enterprise, as distinct from the product-profit imperative of business. It is a vitally important distinction, and one that needs to be made more often by more artists. Poet Robert Bringhurst put it eloquently back in 1988, when he wrote, in that bastion of business, the Globe & Mail, that “Art, like love, speaks from and calls us to a world where money has no claim . . . the ground of art, the source of art, is outside money’s bounds.”

That, after all, is why artists are principally involved in non-profit ventures such as literary and other arts journals, concert and dance series, and the like. Artists are out to make a living, not a killing.

The realm of art is the spiritual, however material the medium. And the spiritual cannot be quantified. It cannot be measured and mapped, dissected, analyzed, systematized, mass-produced, and peddled on the open market. Nor can it be anonymized into that featureless, universal commodity of business-text examples, the widget. The deepest expressions of our humanity and our most profound spiritual strivings are not to be treated as some kind of mental popcorn, as diversionary geegaws, as trinkets and baubles. Artists need to reinstate the boundaries and reclaim our territory. We need to comply no more with the terminological incursions of corporate commodification, and to regain control of the language that defines our activities. Taking over our mouths is a sure means of taking over our minds. It is time to start an inoculation process against bizspeak throughout the arts community, and especially among new generations of artists.

Paul Dutton has been a professional artist for over forty years, principally as a writer, musician, and performer, with occasional activity in theatre, the visual arts, film, television, and radio. He has taken his art to festivals, clubs, concert halls, and classrooms throughout Canada, the United States, and Europe, appearing solo and in ensemble (The Four Horsemen, CCMC, Five Men Singing, Quintet à Bras). His most recent book is the novel Several Women Dancing, and his most recent CD is Oralizations.

This article was originally published in Musicworks 92, Summer 2005. Reprinted with permission.