Flowers on Mars: Bringing life, or not, to the Red Planet

Category
Art & Aesthetics
Gardenalia
Space
Flowers on Mars: Bringing life, or not, to the Red Planet
by Herbert Wright
Published: Dec 22, 2019
Standfirst
While considering an exhibition in London that proposes ways of bringing life to our closest planetary neighbour, Herbert Wright surveys the challenges for those who seek a future there.
Body

From The Wilding of Mars at the Design Museum, London. Photo by Ed Reeves.

LONDON — At a reception in a well-to-do American suburban house, someone called Bruno Anthony is buttonholing the distinguished host. ‘Senator,’ he says, ‘can you imagine being able to smell a flower on the planet of Mars?’ It’s a scene from Hitchcock’s 1951 film Strangers On A Train. In reality, ever since the first spacecraft landed on the planet in 1976, no clear sign has been found of any life at all. But maybe the idea of flowers on Mars isn’t so crazy after all.

Maybe a particular vision — by a London-based artist Dr. Alexandra Daisy Ginsberg, working with others, including a NASA exobiologist — is exactly what we need right now, when there’s a lot of talk about moving to mars. The Design Museum in London even has a show of that name. Dr. Ginsberg’s big idea isn’t about astronauts or cities on the Red Planet, or human destiny in space. It’s called The Wilding of Mars, and it's part of the Moving to Mars show. Ginsberg says it offers ‘an alternative to our human-centric view of worlding’. We’ll come back to this highlight of the show later.

It’s not just a habitat or base, it’s also a home.

In the meantime, Mars is creating Twitter storms, attracting entrepreneurs with serious money, and diverting top scientists, engineers and designers. Even the highest levels of US power has caught the bug. NASA wants humans back on the Moon by 2024, but as President Trump tweeted in June 2019, ‘they should be focused on the much bigger things we are doing, including Mars’.

The ultimate goal is to live there. China is already simulating a Mars base in the Gobi Desert. Elon Musk, billionaire boss of SpaceX, wants us to become a ‘multi-planetary species’ and talks of building a sustainable city on Mars with a 1,000 flights of his Starship rocket, already in development.

Why this Mars fever? It’s not the first time Mars has caught the imagination. The fantasy of life on Mars is an old one. Astronomer Percival Lowell thought he saw the canals of a dying Martian civilisation, and wrote a book about it in 1909 (displayed at the Design Museum). HG Wells’ The War of the Worlds, about unfriendly Martians arriving, created panic when Orson Welles adapted it for radio in 1938. Nowadays, scientists have shrunk the potential for Martian life down to microbes, perhaps living underground. A never-ending parade of space probes hunts for hints of them. In 2020, another three rovers heading towards to Mars (NASA’s sixth, China’s first, and a joint European-Russian mission). 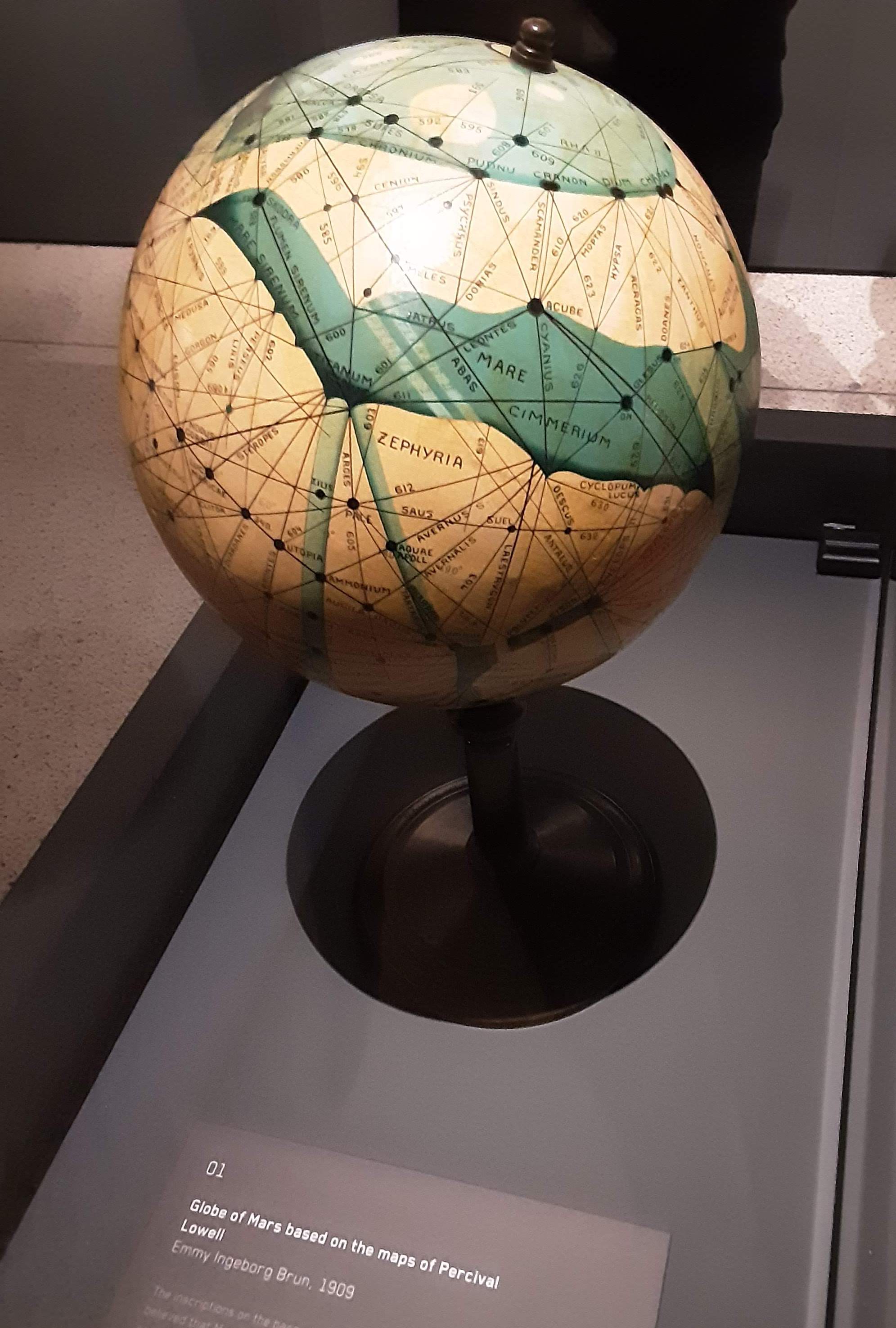 Chances are slim they’ll come up with anything alive. Mars is a hostile environment for life. Don’t be fooled with its sense of the familiar. It has dry river valleys, hills and plains which stretch under a pale sky crossed by wispy clouds, a bit like Nevada. The technology to put feet on the ground there seems within reach. But the reality is that temperatures average -63C, colder than the South Pole. Martian air pressure is 6 millibars, while on Earth it is 1000. If you were sucked out of a plane, the air would be three times denser and still kill you. And there’s no protection from the solar wind, solar storms or the cosmic rays pouring from the sky. If we sent astronauts to Mars, the journey alone could kill them because of this radiation exposure.

Just suppose that solutions emerge and humanity establishes a base. Well, perhaps the most thorough plan is by international architects Hassel, working with NASA and on show at the Design Museum. Robots would build their enticing Mars Habitat, using 3D printing to construct a dune-like shell from Martian regolith (soil). Astronauts would arrive later with modular units including pods for living, sleep and a laboratory, all of which are tucked into the shell. Xavier De Kestelier, Hassell's Principal and Head of Design Technology, says ‘it’s not just a habitat or base, it’s also a home’. He imagines that in the 2030s, four to eight people could be living in the Mars Habitat. That compares with the most remote outposts humanity now has — Russia’s high altitude Vostok base in the centre of Antarctica has a crew of 25, and the International Space Station is designed for six, but has hosted up to 13. Mars Habitat would establish human presence. De Kestelier told me that ‘we can imagine a base that could hold maybe 50 within the same topology of this base. Beyond that we should really start to think what communities and Mars societies would look like’. 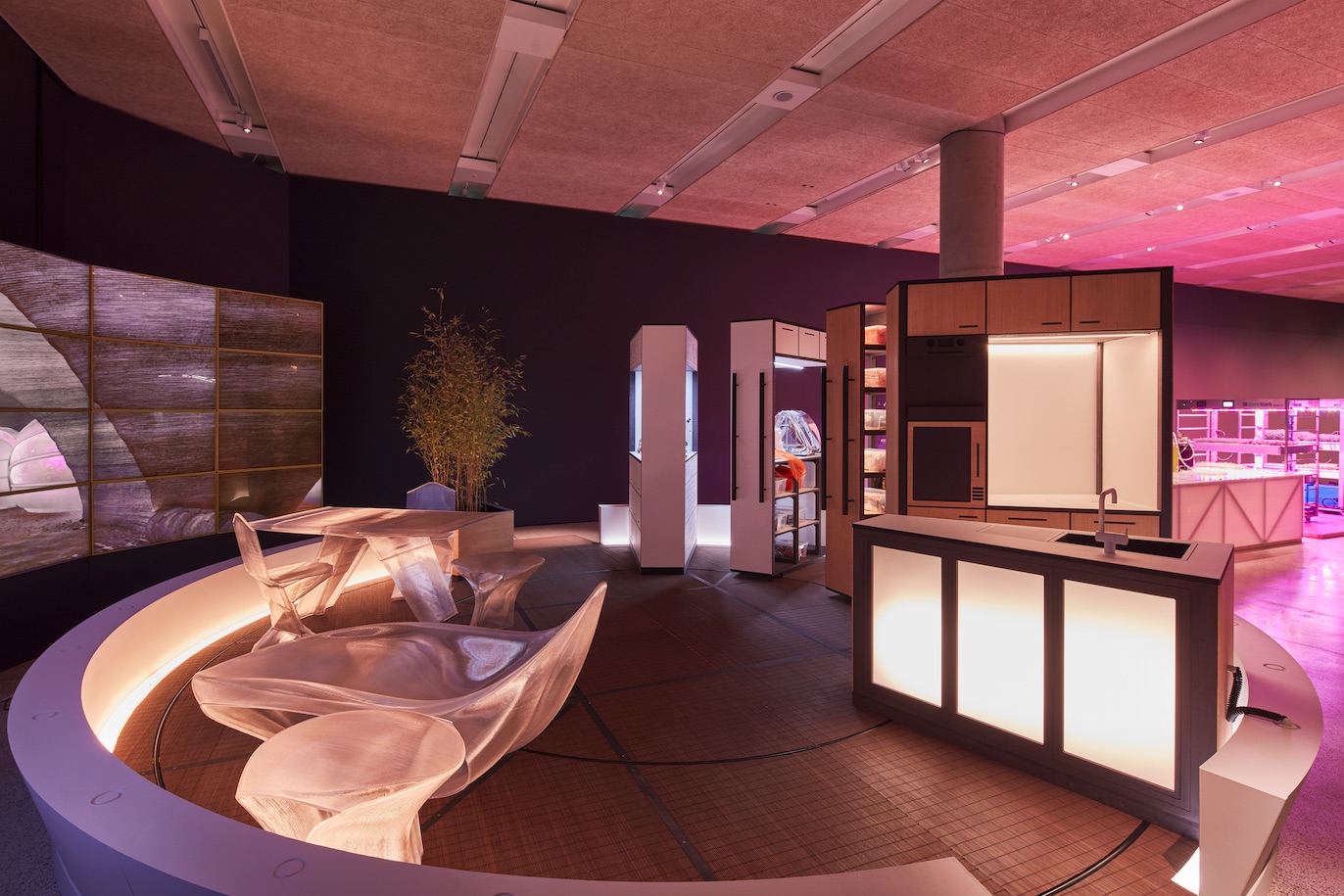 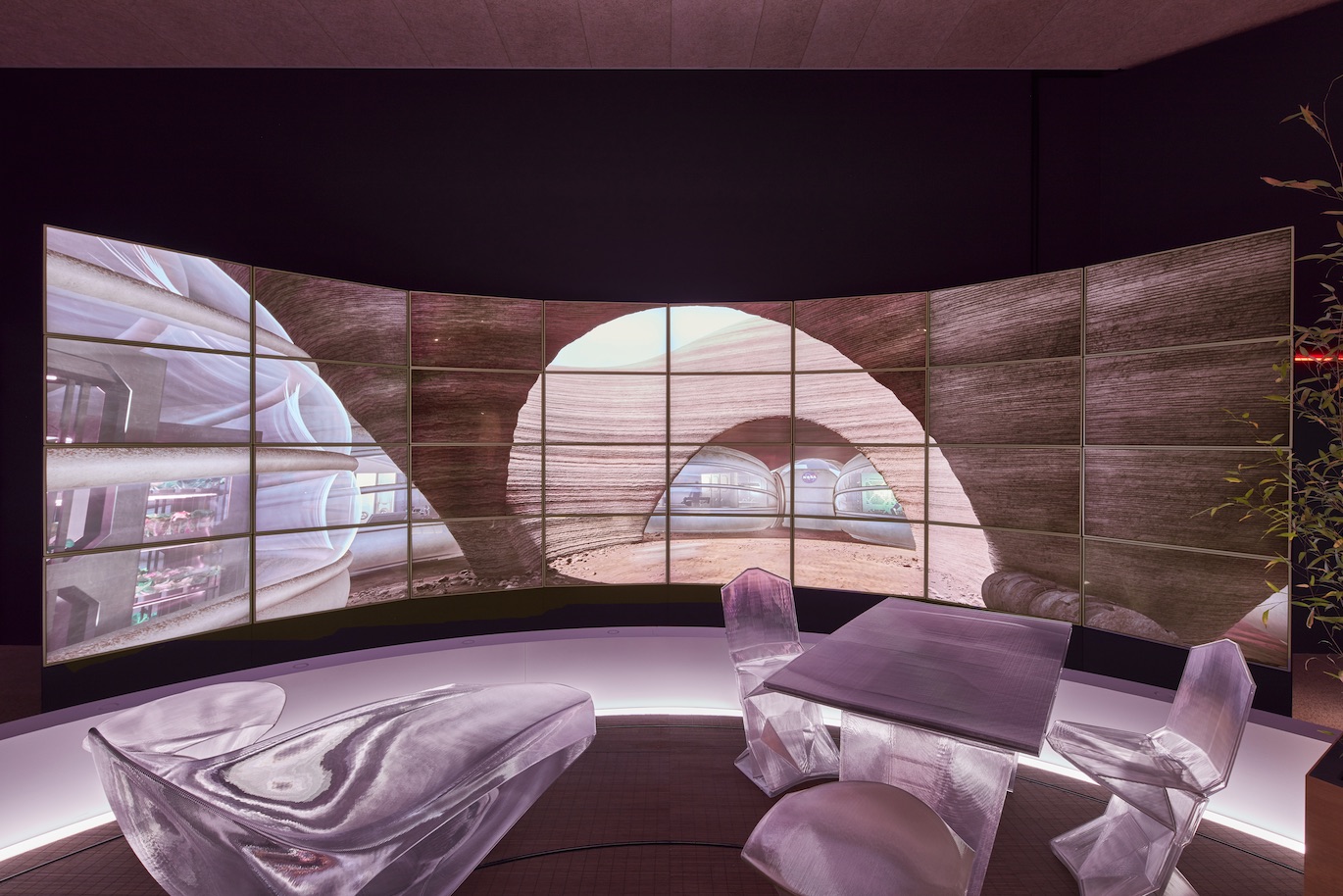 Mars Habitat by HASSELL with 3D-printed furniture by Nagami, Moving to Mars exhibition. With thanks to Oxygen Model Management. Photo Ed Reeve.

A Martian society is the sort of thing Musk has in mind when he says a million people could live on Mars by the 2060s. The living would be easier if we could genetically engineer ourselves for radiation resistance and rarified air. In In November, Weill Cornell University professor Chris Mason talked of using the genes of tardigrades, hardy microscopic beasts that survive extreme temperatures, lack of water and near-vacuum (an idea, by the way, this correspondent wrote into a 2014 story, 'The Delivery'.)

But let’s stop for a moment. We need to talk about humanity’s record with colonisation. We have a bad record of trashing places. We send pollution far and wide, suck resources dry, and devastate local ecosystems. If we take Mars, the pollution could even include nuclear waste; NASA is already developing a reactor called Kilopower to power a base. When it comes to resources, it’s big business and Mars would be just one source in a chain exploited exponentially — one academic paper extrapolated historical data on resource exploitation to guesstimate that we would exhaust the entire Solar System in 400 years. The trashing of Mars could be a lot faster than that, especially if an idea like Musk’s — of pumping up the atmosphere by dropping nuclear weapons on its frozen CO2 polar caps — ever happened.

Ginsberg calls it ‘a heterotopia: a world that is not better or worse but different, a place to reflect back on our world’.

Ginsberg’s Wilding of Mars is about bringing life to Mars, but it’s not like the usual colonisation plans. Ginsberg comments that ’people are selling the vision’, but her vision could not be more different. Not least, it leaves Mars free of humans. Cyanobacteria, which predate the first land plants on Earth by three billion years, would start to change the atmosphere and make Mars warmer. This is almost terraforming, meaning engineering a planet to be Earth-like — something Mars colonisation advocates have advocated. But in this case, the objective is less ambitious than replicating Earth conditions: it is to give transferred extremophile plants (species that live in extreme conditions) a chance of surviving, and evolving. Using gaming engines (normally used in video game design), Ginsberg has developed a picture of possible Martian ecosystems that emerge over hundreds of millennia. The planet would gradually change as species take hold, evolve and create new air which moderates radiation. Eventually, water flows and temperatures rise to around 10C. The planet has become a repository of nature.

Ginsberg acknowledges ‘even sending proxies to Mars in the form of other lifeforms from Earth is a colonial act’. As for eco-systems, we’d have to be sure there wasn’t one on Mars before we bring anything living, because everything, including ourselves, would be a potentially lethal invasive species. She acknowledges that ‘indigenous life, if it exists on Mars, would potentially be at risk’, and says ‘it is one of my ambitions of the work to bring attention to this’. 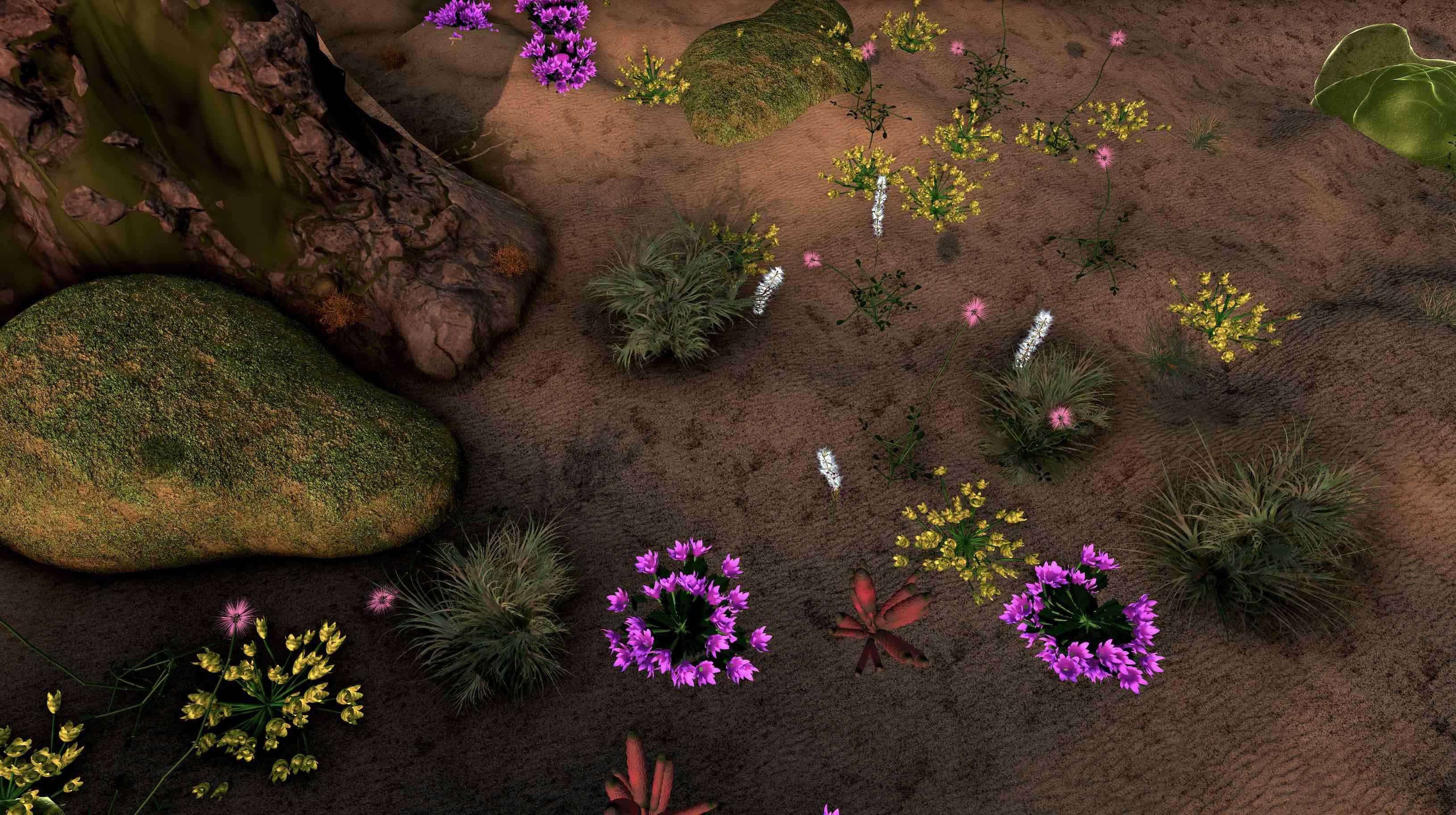 Flowering plants in The Wilding of Mars by Alexandra Daisy Ginsberg, courtesy of the artist.

The Wilding of Mars is a theoretical simulation rather than a proposal. Ginsberg calls it ‘a heterotopia: a world that is not better or worse but different, a place to reflect back on our world’. That’s a huge part of what makes the project so powerful. The idea of re-wilding swathes of our own world is a way of re-introducing biodiversity and repairing damage we have done. Although phenomena like the rampant destruction of rainforests, the acidification of oceans and the mass extinction we have set in motion are all out of control, rewilding projects offer rays of hope. They range from replacing dairy animals on an English estate to reconnecting a 3,200km-long wilderness in the Rocky Mountains.

The difference on Mars is that the wilding is new and we’re not in the picture to see it. Of course, we may not be around anyway. Long-term demographic trends suggest Peak Humanity around 2100, followed by slow population decline. But our fossil fuel addiction is moving things faster than expected; we’re heading to the tipping point of runaway global heating. Because of that and other reasons, renowned Cambridge astronomer Martin Rees puts the chances of human civilisation surviving to 2100 at 50-50. 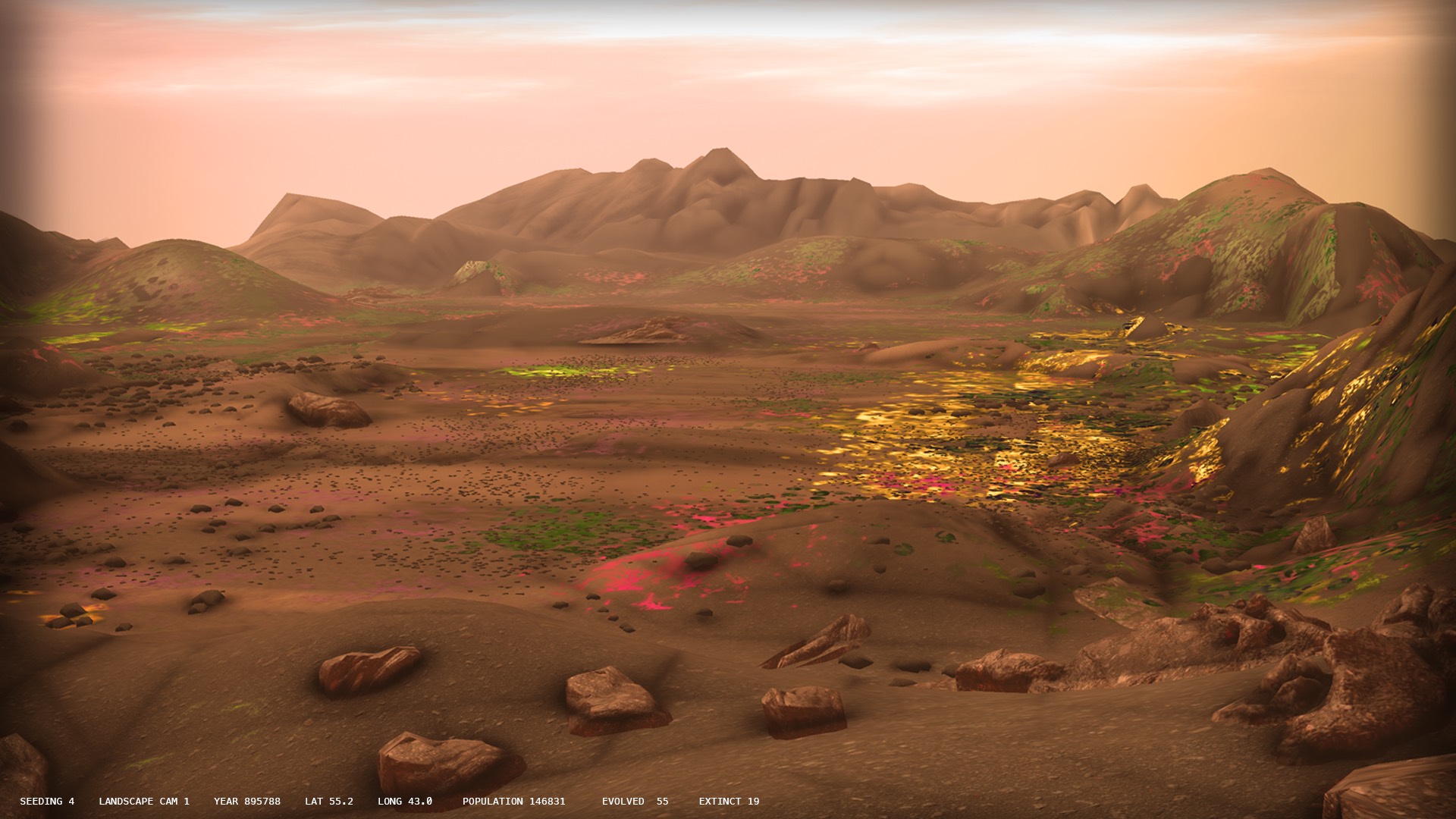 The Wilding of Mars by Alexandra Daisy Ginsberg.

It’s ironic that back in 1909, Lowell thought that because the planet was drying up, life on Mars was dying and ‘it has not too long to last’. It’s us that may not last long, and Mars where life could bloom, long after we are gone. Ginsberg’s seeding of the Mars wilding would take millennia, but maybe we could project automatic super-intelligent systems into this deep time to carry on the work without us.

If we bring nature to places, but we are not there to observe it, is there any other benefit apart from to nature itself? ‘That’s the question I hope people ask!’ says Ginsberg. ‘“Nature” is a human construct, we are part of the world’, she continues. ‘The Wilding of Mars offers a non-human perspective on a world’. Whatever ‘nature’ may be, life doesn’t need our presence to validate it. Even so, here’s another thought: we create monuments as markers left in time for what we have been and done. What better monument than a living planet?

And what about the flowers? Species involved in The Wilding of Mars include a sub-Antarctic perennial and a desert cactus — ones that flower and are pollinated by wind, not insects.

Bruno Anthony will never smell these flowers on Mars. But it’s something we can all imagine now. ≈ç

Flowers on Mars: Bringing life, or not, to the Red Planet
Botticelli Reimagined: The Adventure of Venus on Earth
At the Edge of Emptiness
Archive
Seduced by Plants: To Draw You is to Know You

Botticelli Reimagined: The Adventure of Venus on Earth
At the Edge of Emptiness
Peak Humanity and How to Avoid It
Foxgloves
Training Beauty