Germaine Greer on a Bug's Life, and Ours

Category
Photography & Moving Images
Finding & Foraging
Wildlife & Wilderness
Germaine Greer on a Bug's Life, and Ours
by Whitney Smith
Published: Nov 08, 2020
Standfirst
Among other accomplishments, Germaine Greer is the President of Buglife, Europe's leading charity raising awareness of the importance of invertebrates to the biosphere. In this interview with Whitney Smith, Ms. Greer speaks about why she was drawn to this cause and how the health of these species sits in the balance.

On this theme, we're proud to showcase the work of winning photographers of the 2020 Luminar Bug Photography Awards. Curiously enough, the winner of the grand prize started photographing invertebrates as a way of overcoming his childhood phobia of insects.
Body

WHITNEY SMITH  What led you to take up the position of President of Buglife?

GERMAINE GREER  I started out as a Vice President shortly after its formation in 2004, before graduating to President in 2006. Throughout my life I have always stood up for what I believe is right, regardless of popularity. To quote Sir David Attenborough, ‘If we and the rest of the back-boned animals were to disappear overnight, the rest of the world would get on pretty well. But if the invertebrates were to disappear, the world’s ecosystems would collapse.’ This is why I stand up for invertebrates.

SMITH  What sort of work does Buglife do, and what is its value for you?

GREER  Buglife is the only organisation in Europe devoted to the conservation of all invertebrates. We’re actively working to save Britain’s rarest little animals, everything from bees to beetles, worms to woodlice, and jumping spiders to jellyfish. Again, the food we eat, the fish we catch, the birds we see, the flowers we smell and the hum of life we hear, simply would not exist without bugs. Invertebrates underpin life on earth and without them the world’s ecosystems would collapse.

SMITH  How does Buglife address the general knowledge and awareness, or the lack of it, that the public has about insects?

GREER  Friendlier relationships with insects is a major plank of Buglife’s new strategy. In 1968, Baba Dioum [a Sengalese forestry engineer] said, 'We will conserve only what we love, we will love only what we understand, and we will understand only what we are taught.' We need to act now to stop insectinction.

Unless we understand the needs of insects, we cannot act effectively.

However, the scale and quality of that action is still limited by society’s lack of understanding and awareness. Unless we understand the needs of insects, we cannot act effectively. If society’s attitudes are dominated by prejudice and ignorance, rather than enlightenment and knowledge, then we will fail to achieve a happy coexistence with nature.

SMITH  Can you explain how the Luminar Bug Photography Awards came about, and how they serve Buglife’s goals?

GREER  We partnered this year with Photocrowd to launch the inaugural Luminar Bug Photography Awards – showcasing the best invertebrates photography from around the world, and raising vital funds for Buglife. These wonderful photos also play an important role in creating friendlier relationships with insects.

SMITH  How can people get involved to help Buglife’s cause?

GREER  We all can play a part in creating a harmonic balance for our planet. People can get involved with Buglife either by donating, joining as members, fundraising, or getting their hands dirty and helping projects on the ground. We can stop and reverse the global declines in our insects, but only if everyone pulls together to do their bit. Small steps can have a huge impact if they all fall at the same time. ≈ç

A selection of photographs by winners of 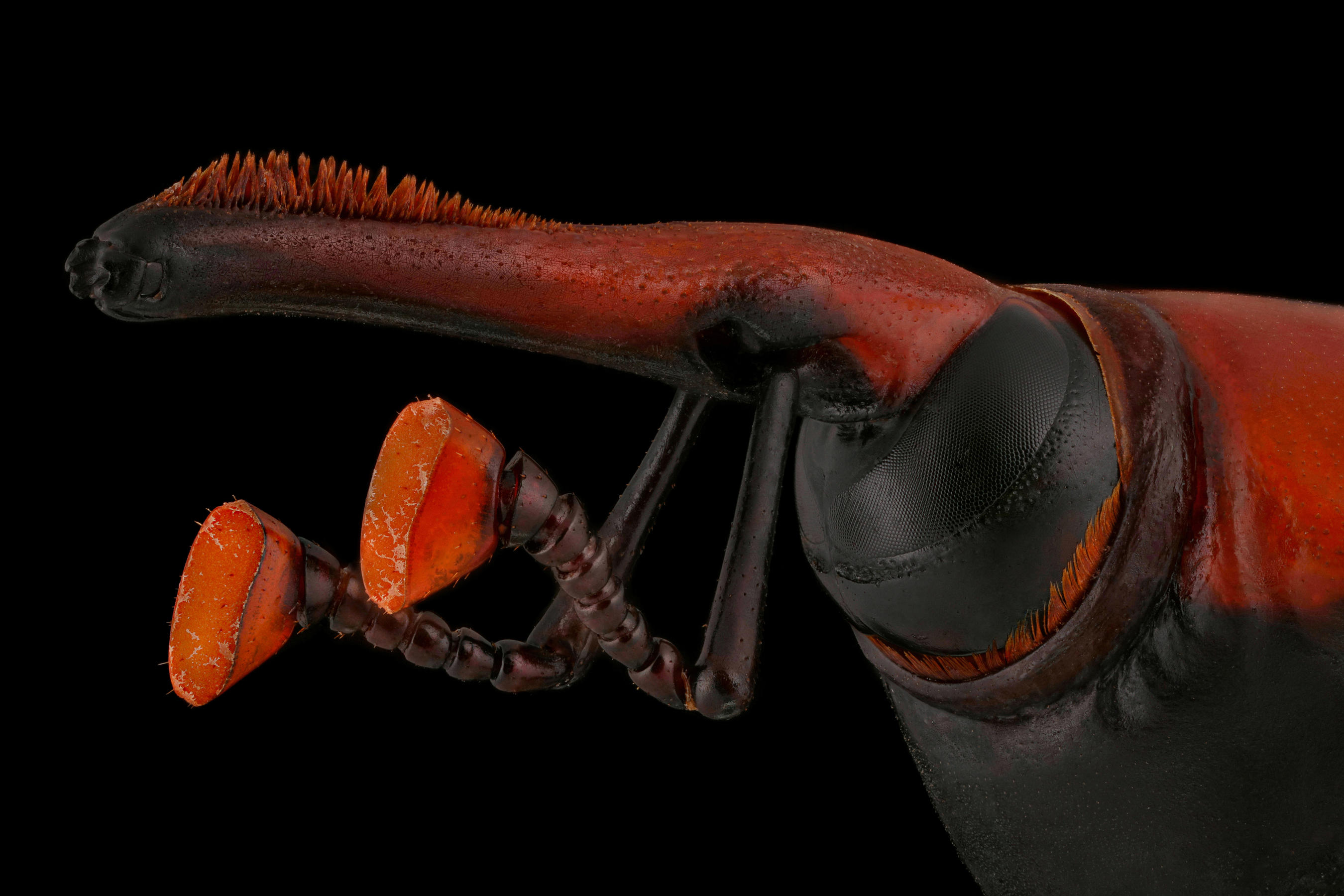 'Red Palm Weevil' by Mofeed Abu Shalwa, Luminar Bug Photographer of the Year 2020 (and aforementioned insect phobia self-healer). Weevil larvae can excavate holes up to a metre long in palm trees, weakening and even killing the host plant. Photographed in Saudi Arabia. [o] 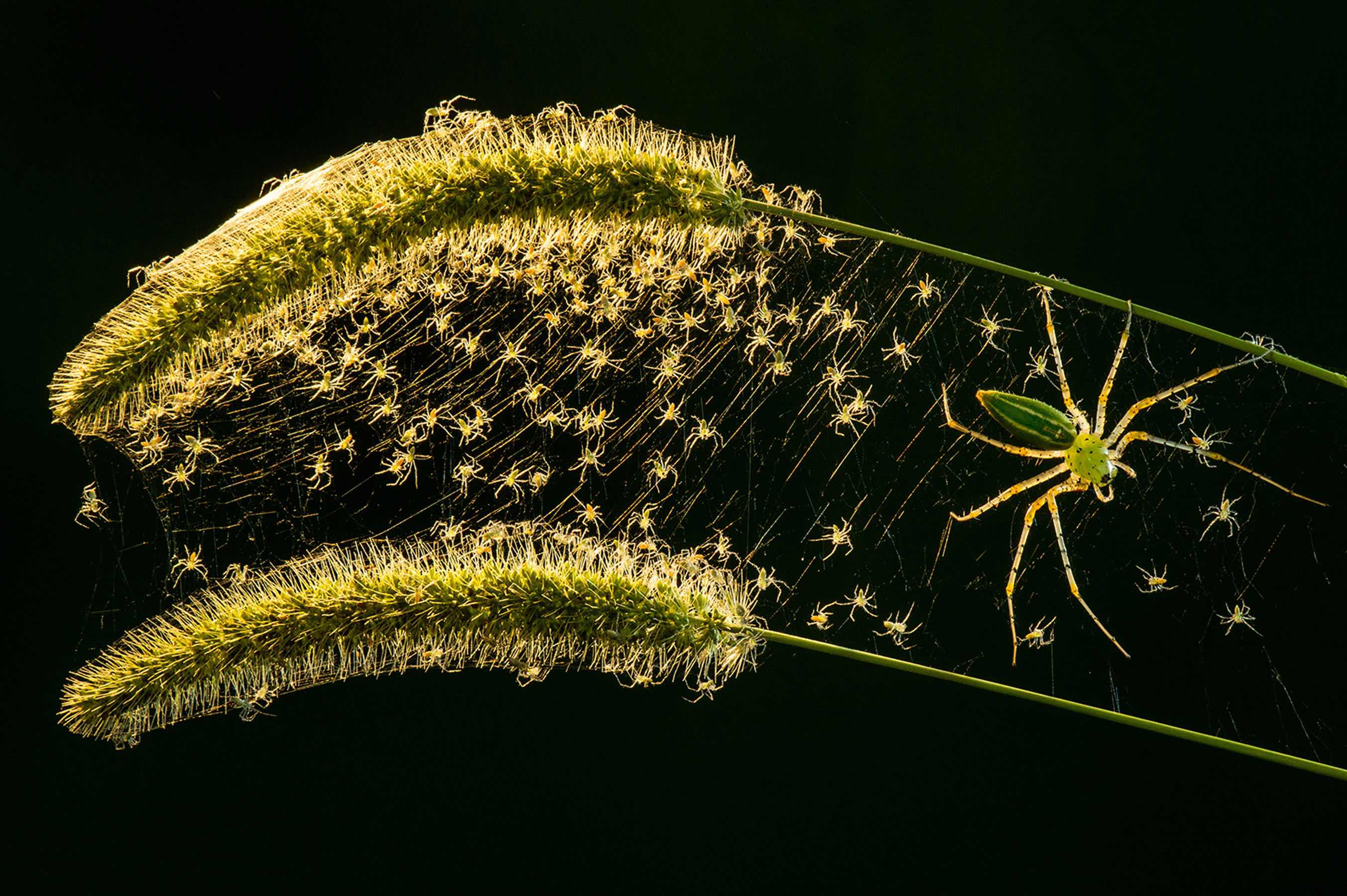 ARACHNIDS include the full range of spiders and harvestmen (e.g., daddy longlegs), as well as scorpions, ticks and mites. They all have eight legs, and live in many habitat types, from the water-loving Fen Raft spider, to the sky-bound Cloud-living spider. It also includes pictures of spider webs. 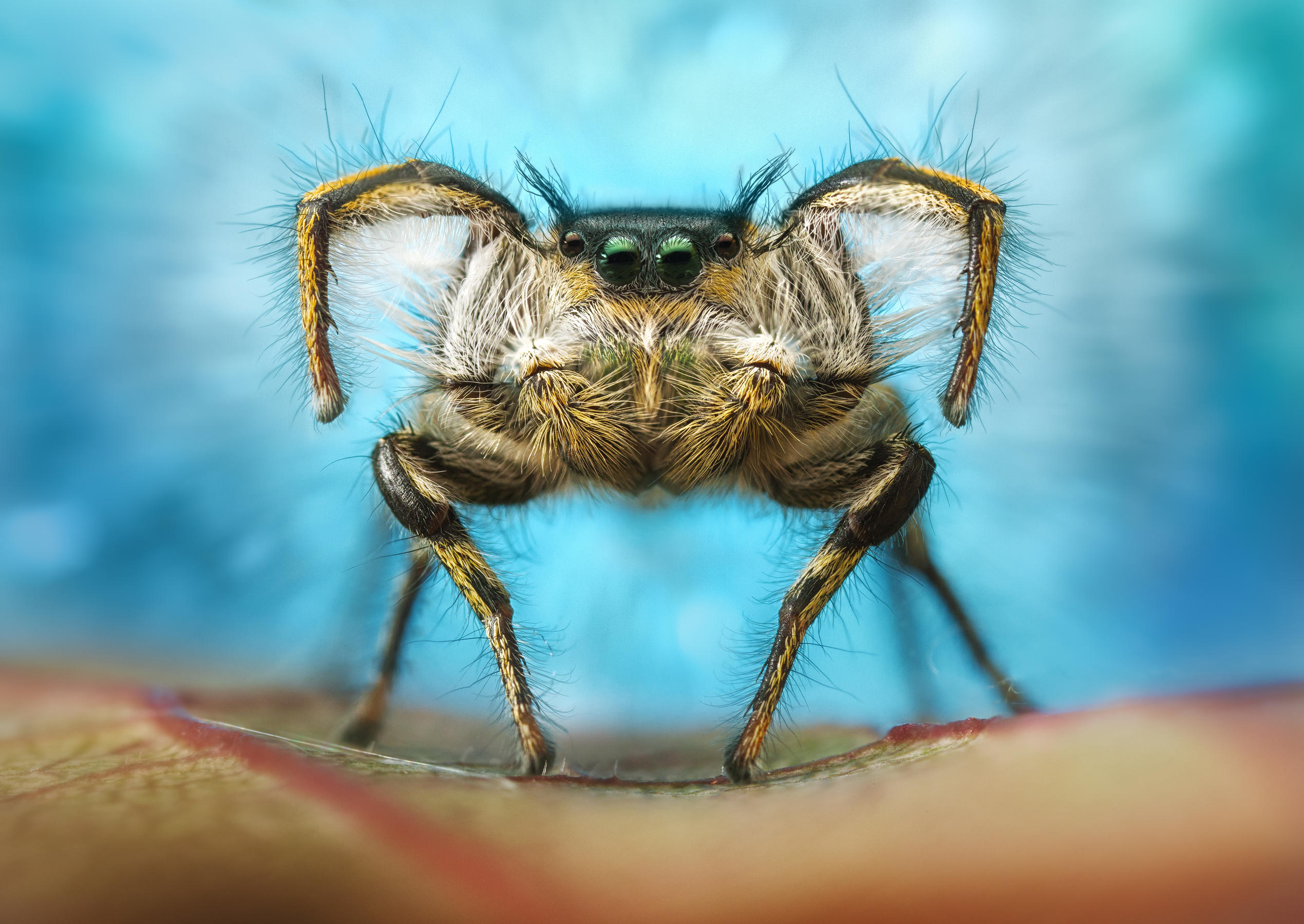 'Dancing Spider' by Raed Ammari. Male jumping spiders (in this case a Phidippus insignarius) perform a courtship dance in which they almost form a heart shape with their arms. This one was shot in Colorado, and was 3rd place in the ‘Arachnids’ category. [o] 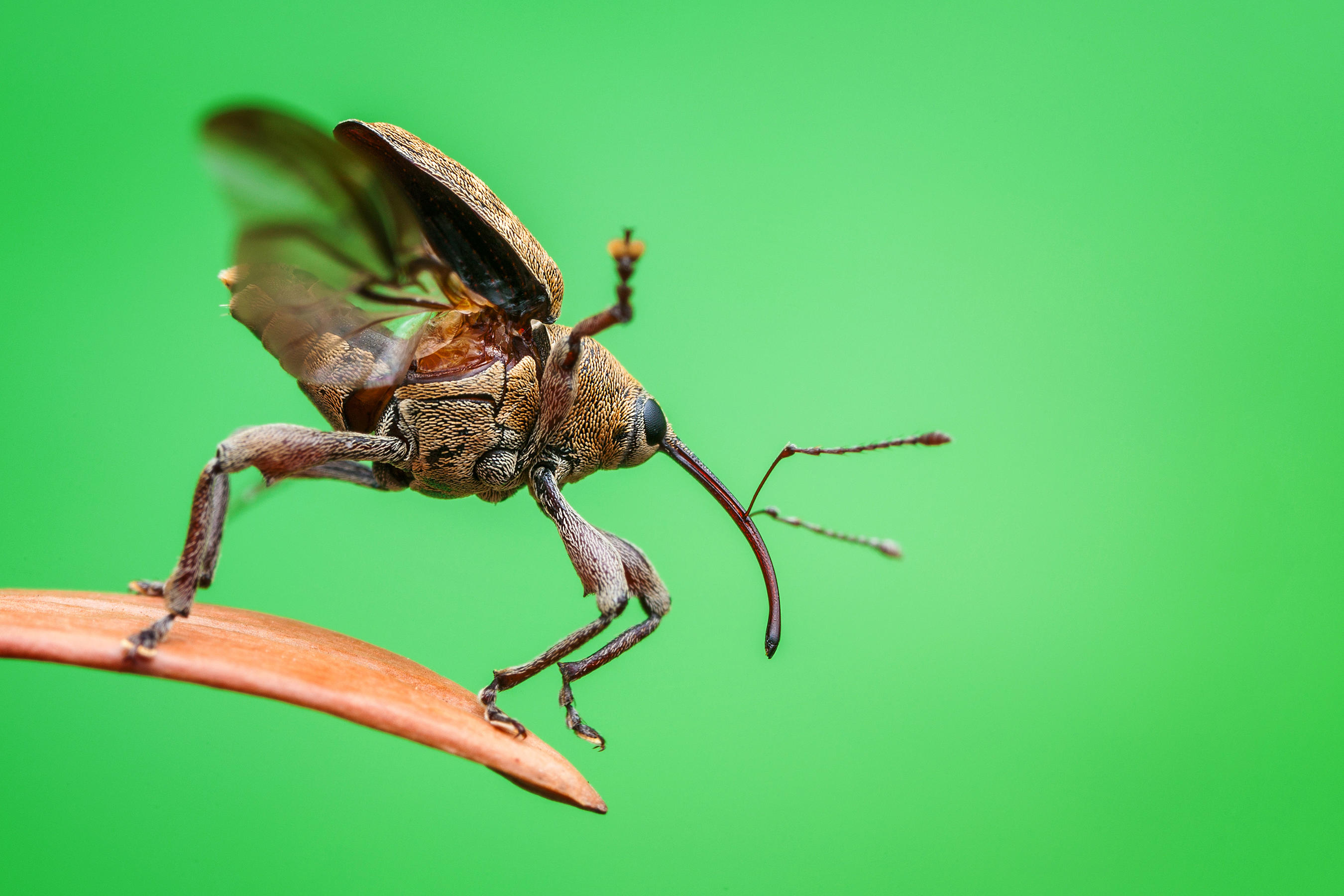 '3, 2, 1, Take off!' by Christian Brockes. An acorn weevil (curculio glandium) is a brown beetle about 3/8 inch long with a long proboscis reminiscent of an elephant's trunk. Females lay a fertilized egg in the soft tissue of a young, green acorn, the seed of oak trees. Winner in the ‘Beetles’ category. [o]

BEETLES are the largest order of insects. Ladybirds/ladybugs, stag beetles, pollen beetles, water beetles, and any member of the Coleoptera order can be entered into this category. From tiny pollen beetles to large long-horned beetles, you can distinguish a beetle by its forewings that are typically modified into hard wing cases (elytra), which cover and protect the hind wings and abdomen. 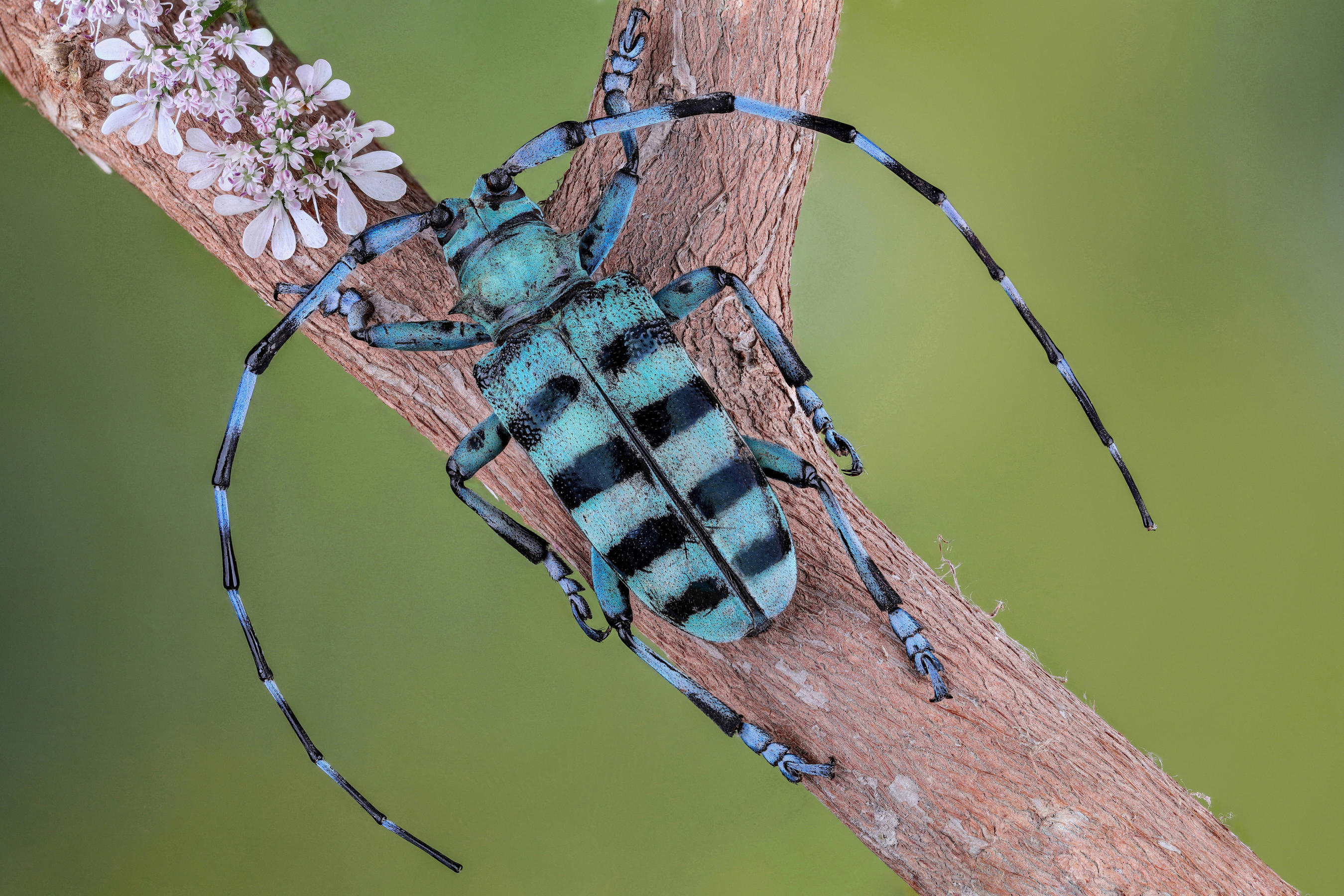 'Blue Longhorn Beetle' by Mofeed Abu Shalwa. Longhorned beetles (Cerambycidae) are typically characterized by extremely long antennae, which are often as long or longer than the beetle’s body. This specimen was shot in an Indonesian rainforest. [o] 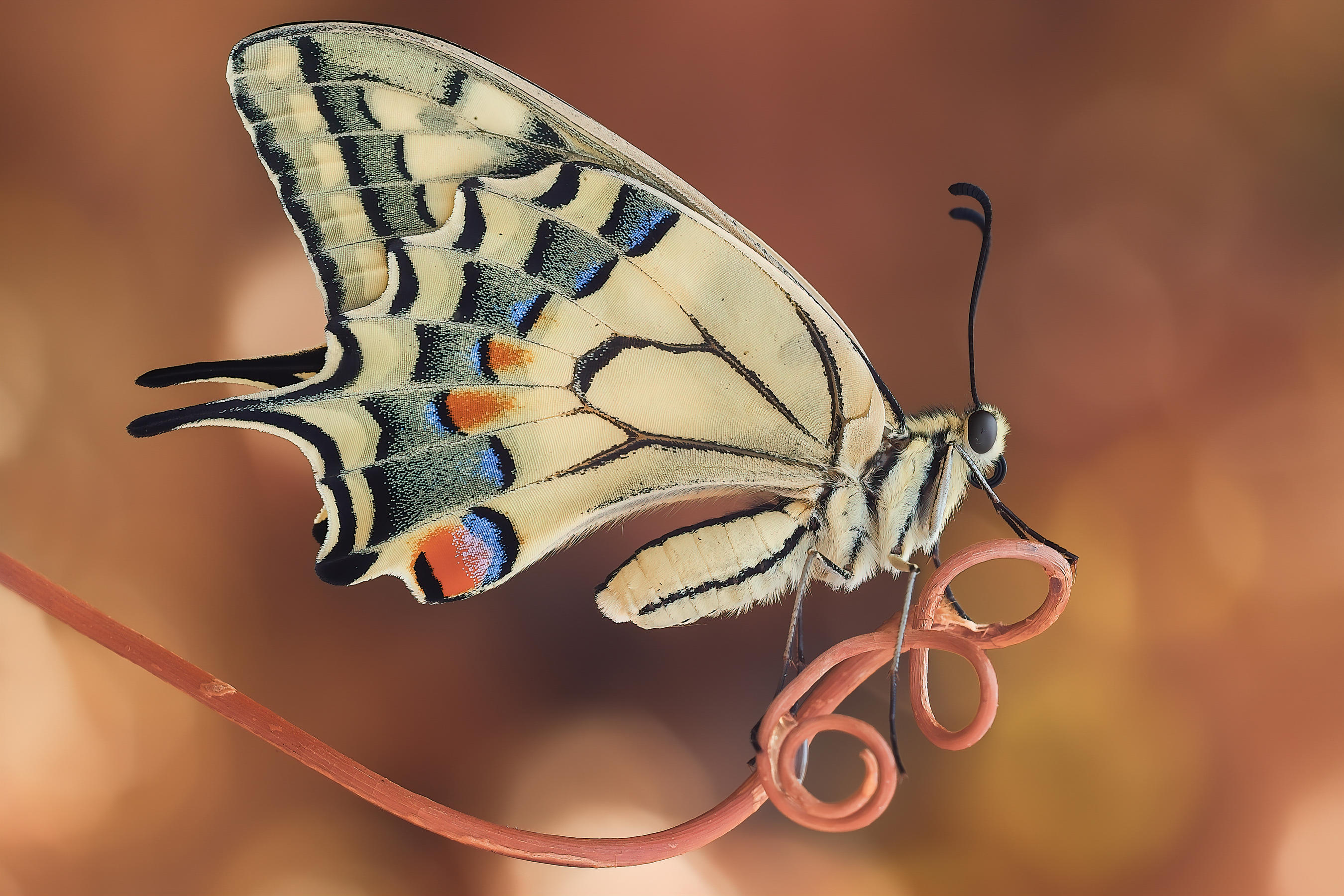 'Swallowtail' by Sara Jazbar. Old World Swallowtail butterfly (Papilio machaon), newly hatched from the chrysalis and waiting for its wings to dry before its first flight. First place in the Butterflies and Moths category. [o]

Members of the Lepidoptera order – BUTTERFLIES AND DAY AND NIGHT-FLYING MOTHS — have wings that are coloured, either for camouflage or distraction – the exception being those with clear wings. It also includes caterpillars. 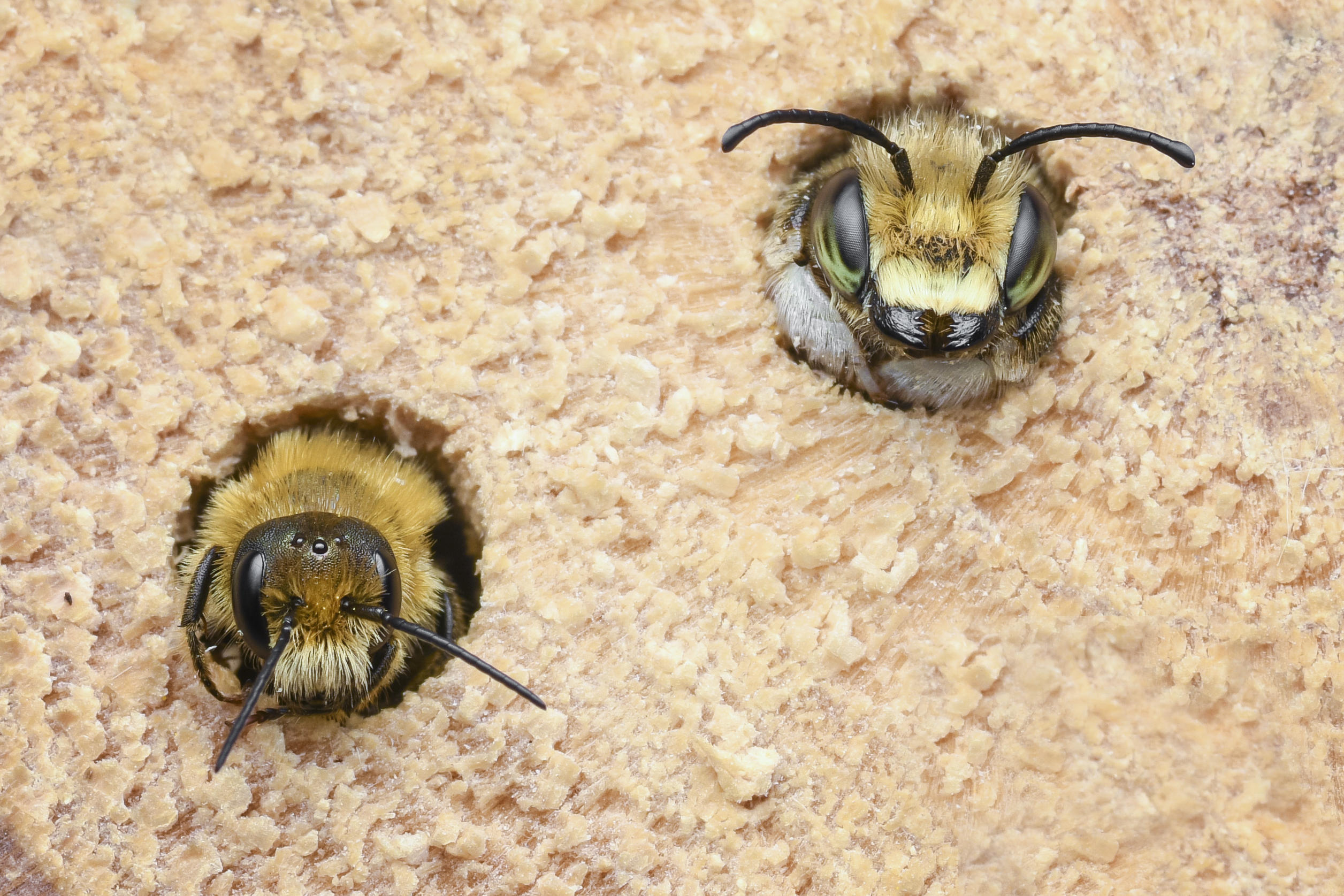 'Home Sweet Home' by Lee Frost. A mining bee and a Willughby's leaf-cutter bee emerging from a bee hotel. Winner in the Bug Homes category. [o]

FLIES, BEES, WASPS & DRAGONFLIES and hornets, hover flies, damselflies, mayflies, lacewings and more are all masters of the air. Their wings are visible, not hidden behind hard cases. 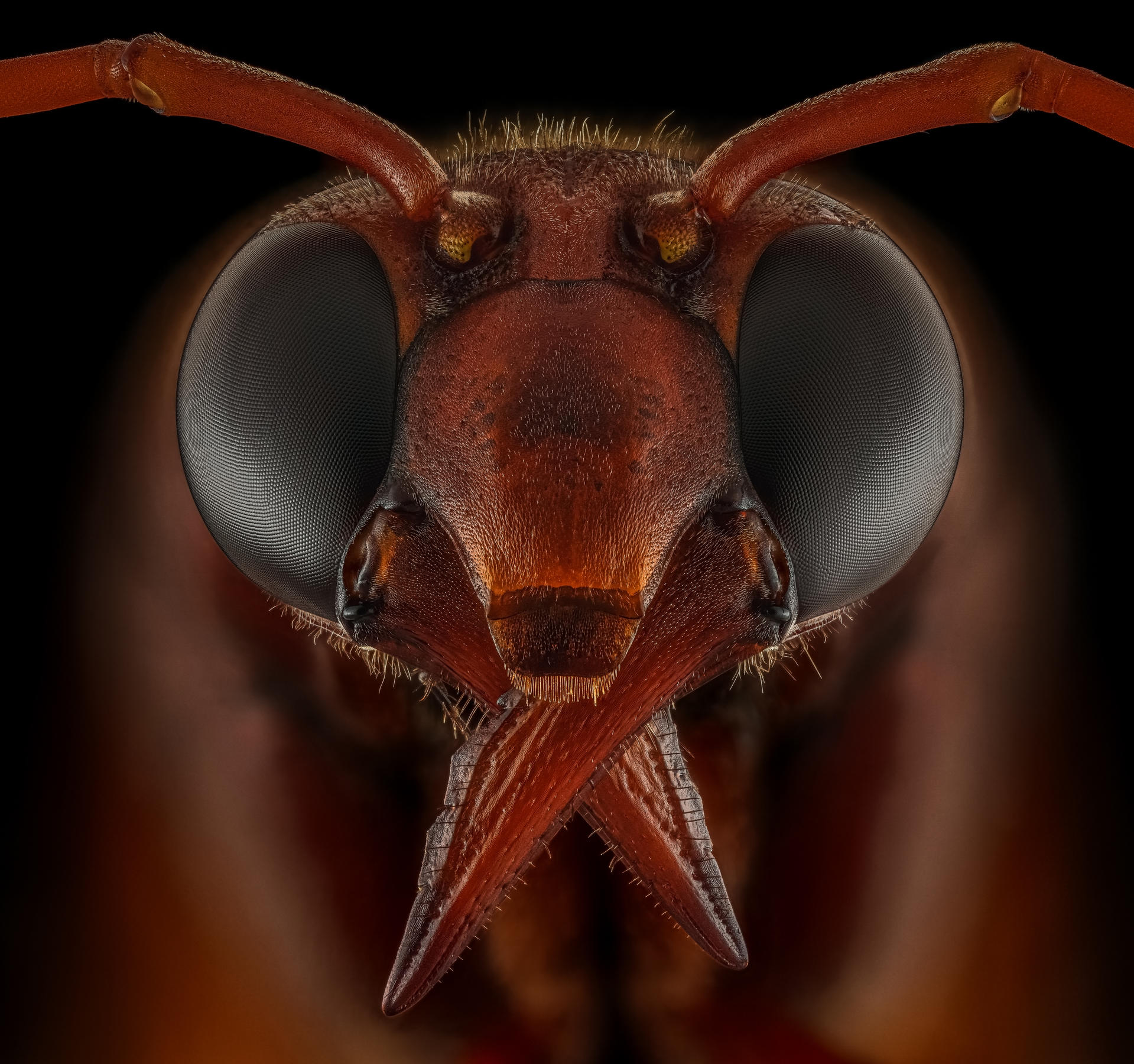 'Potter Wasp' by Riyad Hamzi.. Winner in the Extreme Close-Up category, a category that gives a glimpse into the microscopic world of invertebrates and features the technique called ‘focus stacking’. The potter wasp (or mason wasp) is one of the types of wasps that has more than one colour, in this case: yellow, white, orange, red, and other colours. Photograph shot in Saudi Arabia. [o] 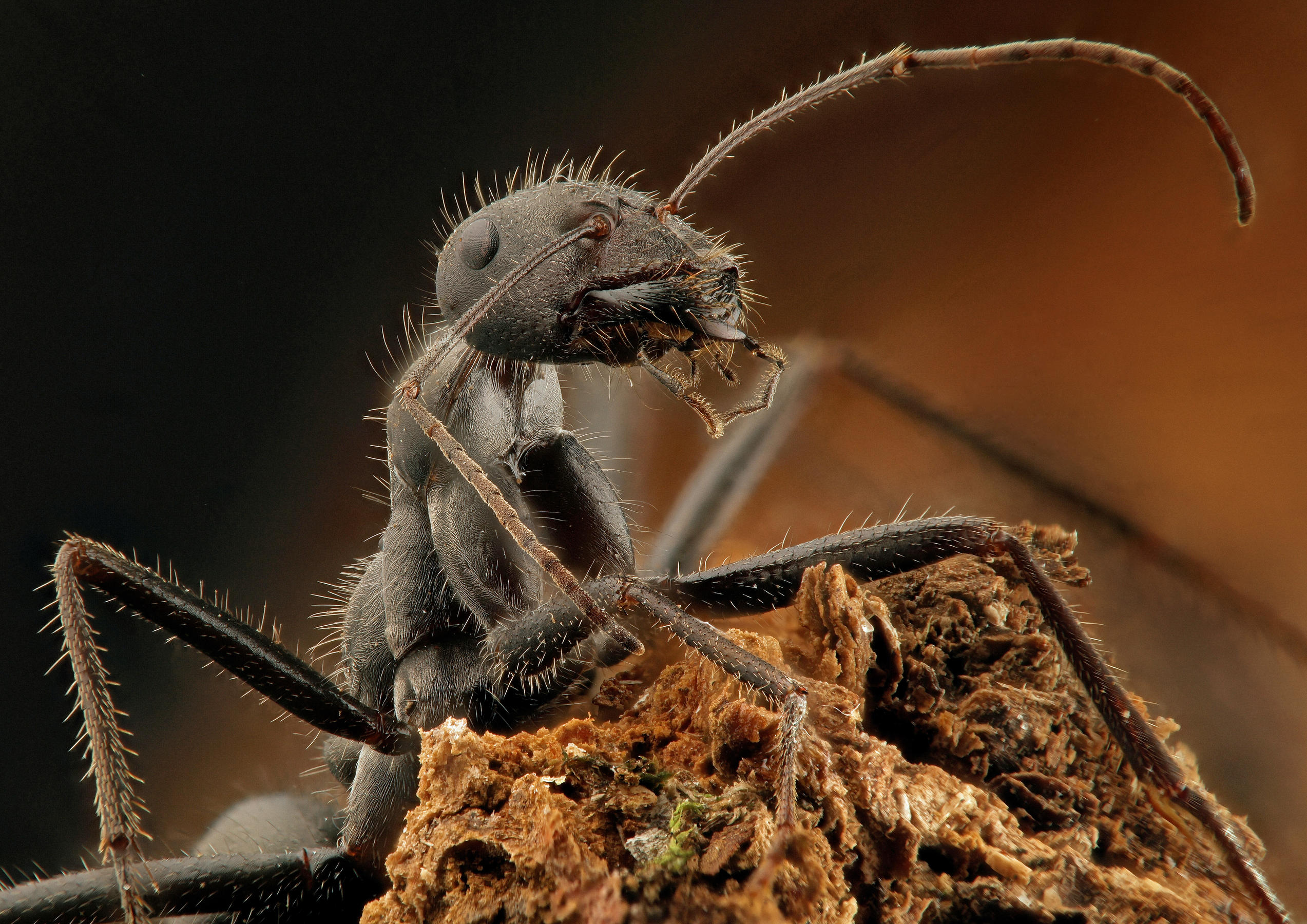 Ants fall into the category of ALL OTHER BUGS in these awards, which include, among others, shield bugs, cicadas, cockroaches, grasshoppers, praying mantises, and earwigs. 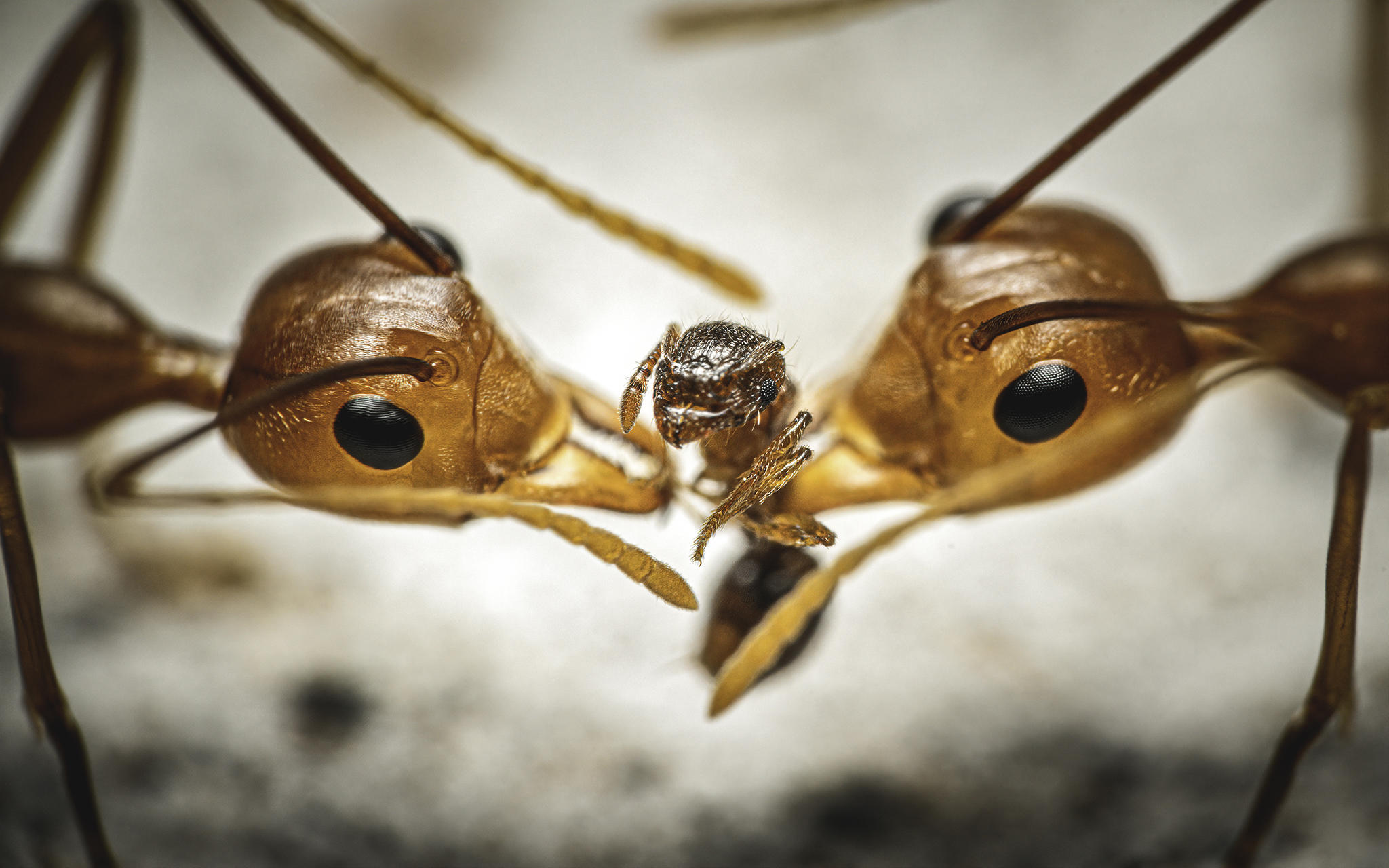 'Tug of War' by Reynante Martinez. Two weaver ants pulling apart a smaller specie. Winner in the ‘All the Other Bugs’ category. [o]

'Do you see me?' by Fabio Sartori. A small dragonfly, hidden behind a blade of glass,

was shot at a small lake near Siena, Italy. Third place in the Mobile Phone category. [o] 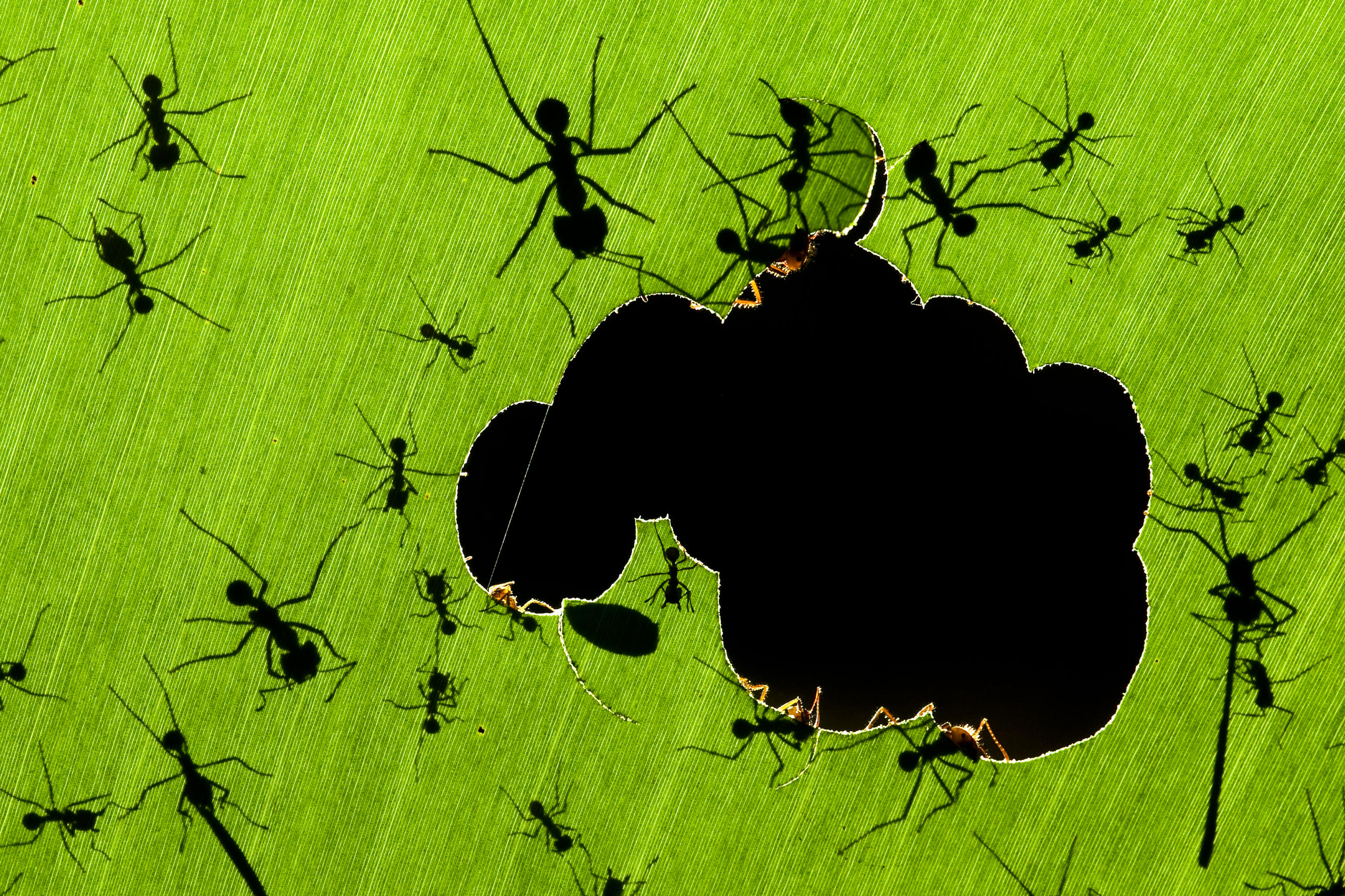 WHITNEY SMITH is the Publisher/Editor of The Journal of Wild Culture. He lives in Toronto.

WE WISH TO THANK Mike Betts and the people at Photocrowd for bringing to life the inaugural Luminar Bug Photography Awards, which provide financial support to Buglife.

Germaine Greer on a Bug's Life, and Ours
The Electric Kool-Aid Turtle Test
On The Cusp of the Known World: A Field Guide & other poems
A Solitary Executioner Clownfrog Wants You to Know She Exists
In and Out with the Hiking Muse

The Electric Kool-Aid Turtle Test
On The Cusp of the Known World: A Field Guide & other poems
A Solitary Executioner Clownfrog Wants You to Know She Exists
In and Out with the Hiking Muse
There are no beginnings