Redefining the Female of the Species

Category
Sex & Sexualities
Wildlife & Wilderness
Research
Redefining the Female of the Species
by Angela Lord
Published: Nov 06, 2022
Standfirst
Our resident nature writer looks at a new book that challenges our preconceptions about female behaviour in the animal world.
Body

Lemurs live in social groups called troops that are led by a dominant female. [o]

Bitch: A Revolutionary Guide to Sex, Evolution & the Female Animal

The question of whether the female of the species is more deadly than the male depends very much on the particular species and the circumstances: whether she is defending her territory, establishing her place in the hierarchy, or protecting her young. The biological role of the sexes has been discussed at length over the centuries, with received wisdom on animal behaviour historically coming from men, from Aristotle to Darwin. So it’s refreshing to hear from female experts in the field who offer new findings based on cutting edge research. This comes in the form of a ground-breaking book by zoologist Lucy Cooke, Bitch: A Revolutionary Guide to Sex, Evolution & the Female Animal.

Female animals can be just as promiscuous, competitive, aggressive, dominant and dynamic as males.

Cooke believes that perceptions have been distorted by “a sexist mythology baked into biology” dating back to the fourth century BC, when Aristotle, sometimes known as the father of zoology, declared in his treatise On the Generation of Animals that the male was predominantly active and the female passive. “In the natural world, female form and role varies wildly to encompass a fascinating spectrum of anatomies and behaviours,” says Cooke. “Female animals can be just as promiscuous, competitive, aggressive, dominant and dynamic as males.”

A growing body of research indicates that, in some cases, females will compete with one another as aggressively as males do. One such example is the Topi antelope (Damaliscus lunatus jimela) during their annual mating season. Females are fertile for a single day only, and often seek to mate with several partners to ensure fertilisation. To gain access to the most suitable males during their brief mating season, they have huge horns and engage in fierce battles.

While some species are led by a "power couple" consisting of an alpha male and his mate, in the case of a matriarchal society, the alpha female holds the primary position of power in the group. For instance, meerkat matriarchs, writes Cooke, are among the most murderous: “The alpha female can be quite vicious, sometimes to the point of killing the offspring of her nearest rival to ensure her dominance.” Subordinate females can then be called on to nurse the babies of the alpha female, as she is likely to produce up to three or four litters a year. 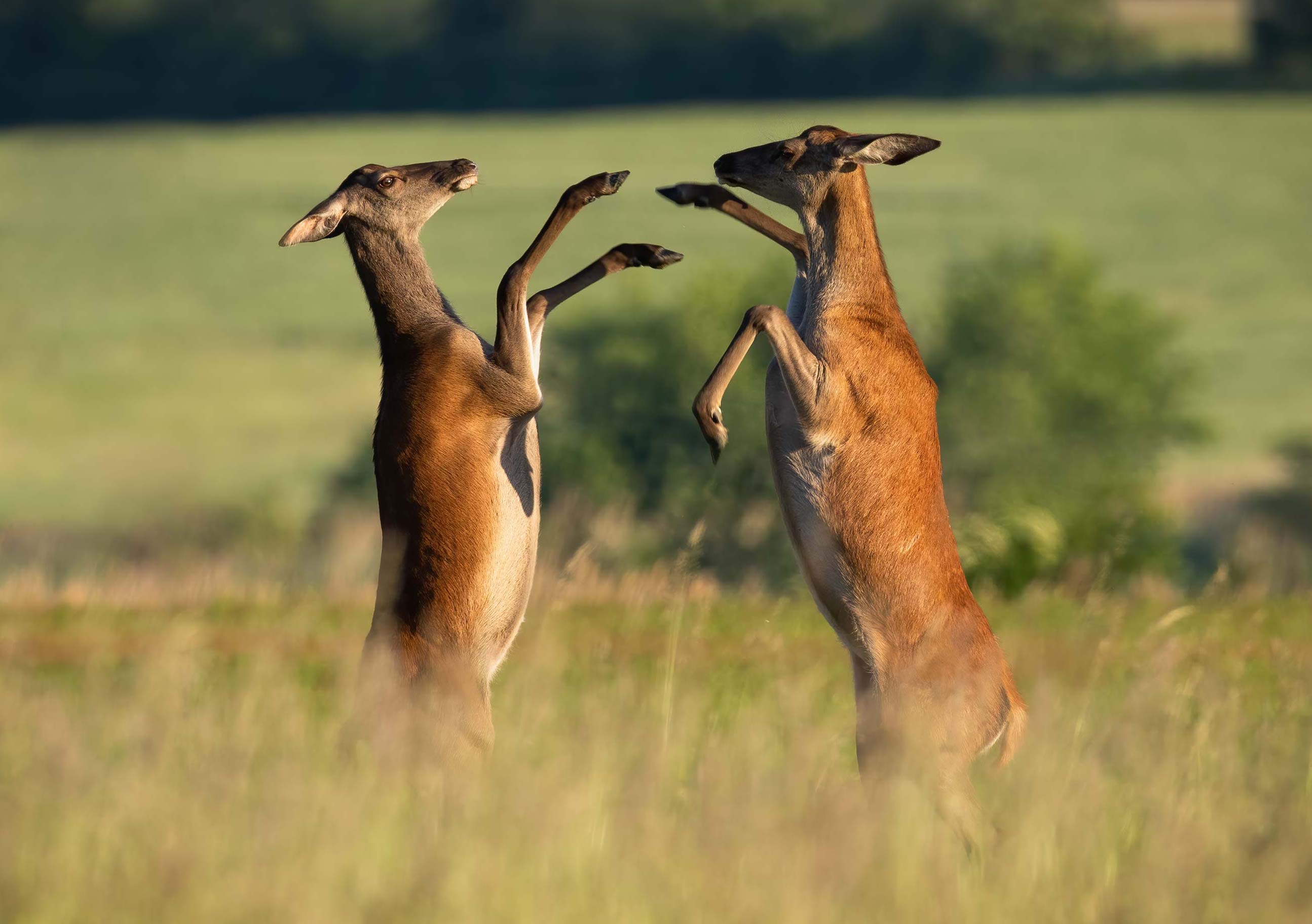 Two female red deer spar for the sexual attentions of males. Similar contests between the males of many species have often been the focus of evolution studies, but researchers are just starting to probe how important the competitions among females may be, too. [o]

Squirrel monkeys are another species with dominant females. Their matrilinear hierarchy means that all females in an established group are related to each other. The introduction of unfamiliar females to such a group can lead to aggressive behaviour, sometimes resulting in serious injuries.

The females’ appearance mimics what we would think of as typically male characteristics, as they have developed prominent genitalia, a feature sometimes known as a pseudo-penis. “The first time I saw a female spider monkey in the Amazon,” recalls Cooke, “I assumed it was a male because of its dangling sexual appendage. Male monkeys are the sex with no apparent penis, since they keep theirs tucked away.”

On the island of Madagascar, some species of female lemurs are as large as the males, or slightly bigger, and display assertive behaviour, such as marking territory with scent glands and intimidating subordinates by hitting or biting them. Anthropologist Rebecca Lewis, who has observed lemurs in the forests of Madagascar, writes in her research paper 'Female Power: A New Framework for Understanding “Female Dominance” in Lemurs': “At Kirindy Forest, females are significantly larger than males. Body size can be one important factor for determining an individual’s ability to physically coerce another.”

The African spotted hyena (Crocuta crocuta) is another species whose females are generally larger and stronger than the males. Yet, a 2018 study found that female hyenas dominate males not merely because they are bigger or stronger, but because they can rely on greater social support from members of their clan. The main reason behind this is that males are more likely to disperse, leaving the group, thus weakening social bonds. 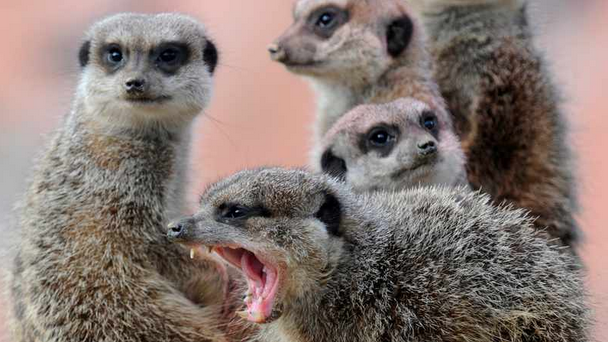 In meerkat society only the matriarch breeds and it is the femalesubordinates who help raise her pups. [o]

When it comes to fearsome females, one of the most notorious examples is the venomous black widow spider (Latrodectus mactans). The black widow's name comes from the female's reputation for occasionally killing and eating her smaller mate after reproduction. Though this has been observed in the wild, it is in certain species only. It is also not a common occurrence since the male is able to detect from chemical signals whether a potential mate has fed recently and will avoid her when she is hungry. Alternatively, he may use the tactic of bringing a gift of food to distract her.

While all species are driven to fight for their own survival and the survival of their offspring, it’s clear from observations of the animal world that the role of the female extends beyond the reproductive function and the nurturing role of the doting mother.

“These are exciting times for evolutionary biologists,” concludes Cooke. “Male competition and female choice do drive sexual selection, but they are just part of the evolutionary picture… The bitches in Bitch demonstrate how being female is about being a fighter for survival and not just a passive sidekick.”

Taking a dig at her "male, pale and stale" forebears might be seen as a leap onto the man-bashing bandwagon . . .

Cooke picks out the most extreme examples from the animal kingdom to prove her point, exploding the myth of the female as the gentler sex. Taking a dig at her "male, pale and stale" forebears might be seen as a leap onto the man-bashing bandwagon, but it is based on her personal experience. She challenges the views of the Victorian naturalist Charles Darwin that "the males of almost all animals have stronger passions than the females" and takes issue with her own college tutor, Richard Dawkins, author of The Selfish Gene. The book's claim that the female is exploited because she expends her energy on producing a limited supply of large eggs, while the male produces millions of mobile sperm, made Cooke feel like a loser: "doomed to play second fiddle to the sperm-shooters . . . a feminine footnote to the macho main event."

While we continue to redefine society’s views on the role of the sexes, the female in all her forms remains a force to be reckoned with. ≈ç

'Meet the world's most murderous mammal: the meerkat.' Meerkat societies are predicated on ruthless reproductive competition between closely related females who, when pregnant, will readily kill and eat each other’s pups . . .