When Trout Walked on Land

Category
Walking
Finding & Foraging
Wildlife & Wilderness
When Trout Walked on Land
by Kelly Garriott Waite
Published: Apr 30, 2017
Standfirst
Our interest in how writers experience 'sense of place' in their local surroundings knows no bounds. For Kelly Garriott Waite, who has lived in Phoenix, Washington, D. C., Toronto and Philadelphia, when she came home to her native Northeast Ohio she discovered more than a local place.
Body

The lake near the woods; the bridge across Plum Creek.

Clinging to the inside of the stall door in the women's restroom at St. Joseph's Church is a circular sticker of Pope Francis, arms raised in a blessing. Five words inch along the sticker's circumference: This Pope Gives Me Hope.

The bathroom smells like all church restrooms. Regardless of denomination, they all share the white deodorizer cake clipped to the inside of the bowl. The scent of stale urine is covered by what smells like mothballs, an odor I will forever associate with grandparents and artificiality. At the sink, there is no vase of silk flowers layered thickly with dust, just a wicker basket of sanitary pads, neatly arranged in three even rows. I return to my pew and listen to the people call out their intentions: a prayer for a nephew who is ill, one for the victims of starvation. Someone wearily mentions the new president. A woman prays for the end of abortion.

"Let us pray to the Lord," the congregation replies.

I keep my mouth still. And not just for this final prayer. I confess I still my mouth for every prayer at church.

I walk in the woods along a well-trodden path, a path shared by humans and their dogs and other animals as well. I see the deep angled tracks of a solitary deer. The paw prints of a raccoon. Hoppings of tiny bird feet, whisper-light on the surface of the earth. This land once belonged to the Wyandot. Sometimes I try to walk as I imagine they did: Sometimes I try to walk without sound.

Such arrogance . . . to impose my will upon the lily.

Spring slowly carpets the ground with yellow trout lilies. A pair of mottled leaves between which a single bashful flower — yellow — emerges, growing on a spindle neck, bent with the weight of its beauty. A crow sails overhead. Tiny minnows paddle up Plum Creek.

I often fished with my grandparents on their hundred-acre farm, first turning over the wooden boards leading to the outhouse and tugging fat night crawlers from the damp soil beneath. I remember threading a wiggling worm onto a hook, watching brown guts emerge. Tossing the line into the lake and waiting for the tip of the bamboo pole to bend. I remember the fish flopping and flapping on the grassy bank, gills heaving, eye pleading. The scales that littered the kitchen counter and stayed there for days. But the only fish I learned to identify was the catfish with its dangerous stinging whiskers. A fish was a fish, like an Indian was an Indian. Who cared about their differences?

They say the trout lily's foliage resembles the skin of its eponymous fish. I study the plant and see that it's true: the fish's skin is mirrored in the lily's leaves. I like to think the plant took an impression of the fish as the trout paused beside it, fins dancing among the weeds and the muck, skin against skin, pattern matching pattern, the species bonded forever back when trout walked on land and trout lilies walked on water.

"The roots of the yellow trout lily are thick and run deep, intertwined one with the other." Photo credit ≈

I used to play at being Native American. Sitting in the quiet of my family's living room with a bowl of water on the mossy carpet. Kneeling before the water, pretending to drink from a stream, calm and clear. In fact, I still play at being Native American, in the fall gathering walnuts and hickories and beechnuts, too, from these woods and the adjacent golf course. This foraging of mine is not a question of survival: at Costco, a bag of walnuts runs sixteen ninety-nine and they're already broken out of their shells.

The Wyandot were pushed from their land, removed first to Kansas then to Oklahoma. The whites justified it thus: the Indians need protection from us. They need time and space in which they might 'civilize' themselves: switching from a hunting society to an agricultural one. Adopting Christianity. Whites said these things to cover the truth, to sanitize reality: we wanted the land. We were greedy for land. Swallow up whole the land of the Native Americans, hundreds of unique and beautiful nations, lumped by us into one. Send them west. Let them find a new home.

I want to bring some yellow trout lilies home. I want to walk through the woods with my trowel and a plastic bag. To uproot some of the plant and settle it into the soil surrounding my pond. Such arrogance, to dig and split apart the roots. To separate mother plant from child. To impose my will upon the lily, rather than accept it where it is. All because I want it. All because I can. I tell myself I'll leave the plant in place, but I already know I'll be back tomorrow, covering up my behavior with some lame excuse: there are enough plants to go around. They will make for less mowing. I'll say whatever I need to say to take the yellow trout lily home. 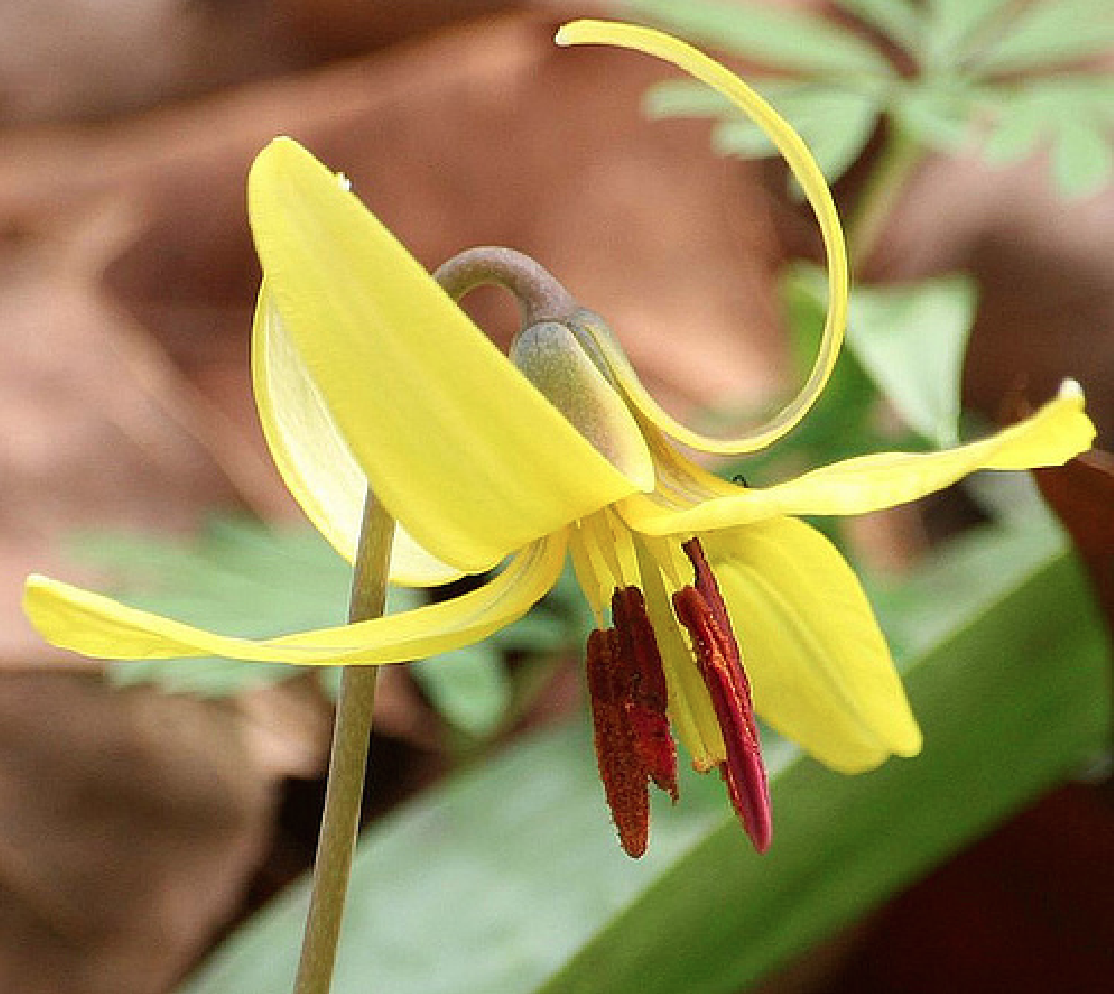 "Hope that the world will go on without our intentions . . ." Photo credit ≈

Growing up I heard the stories of my fifth great-grandfather who came to this land as a Hessian soldier in 1775, forced, most likely, to participate in a war that wasn't his. According to family lore, he deserted in 1778 and made this nation his home. America was my ancestor's hope for a better life. Did he know improving his life would destroy the lives of others? That is not part of the story we tell.

As I get older, learning my family stories has become important to me. Perhaps it's because I have more time on my hands, now that my children are grown. Perhaps it's because I feel myself inching closer to my death. My English ancestors lived in the United States at least seven generations ago. I have a Austrian great-grandmother. Deep, deep Irish roots. But the ancestor to whom I feel closest is my Polish great-grandfather. In 1900, he left a country he'd never known, a country that had been removed from the map by three nations greedy for land: Russia and Prussia and Austria, too. My great-grandfather must have known what it felt like to be displaced. To mourn a land he did not know, the way the Wyandot must still mourn their land and part of their culture. Perhaps genealogy is my attempt to go back. Perhaps it's a way of explaining to myself why my people came and took the land from others. Perhaps it's a way to offer stories to the next generation. 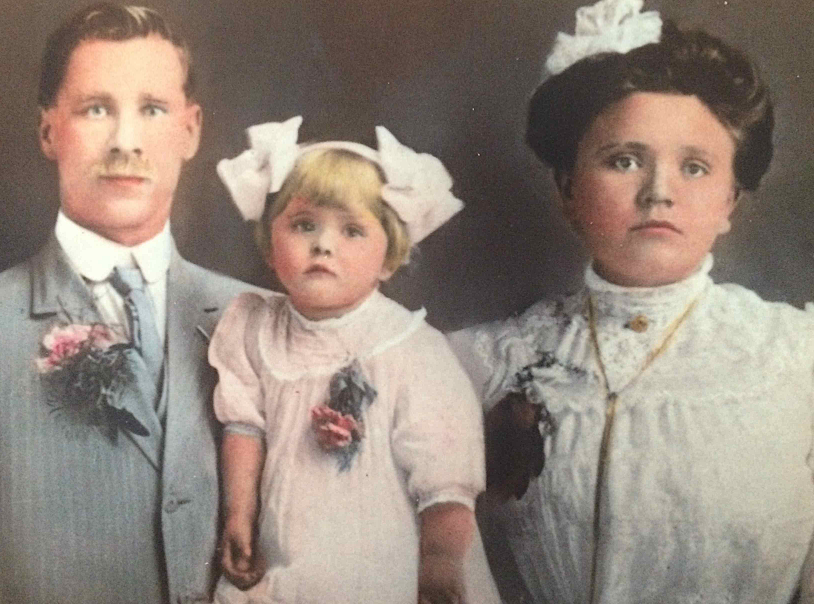 "Mourning a land he did not know" . . . The author's grandmother, Polish great-grandfather and his Austrian wife.

The stories I didn't hear were those of the Wyandot and the Creek. the Seminole and the Chickasaw, stories just as important and worthy and true. Stories that have largely been lost. Stories that need to be loosed and set free. Stories that must be heard.

The ground is hard. The roots of the yellow trout lily are thick and run deep, intertwined one with the other. I hack at them with the blade of my trowel to separate the bunch in my hand. I notice four white lilies growing among the yellow. Do they notice their difference? Do they care? The truth is, I walk in these woods to escape the trivialities of my day and to make meaning of my life. The truth is, the yellow trout lily gives me hope. Hope that the world will go on without our intentions, or perhaps in spite of them.

Bag in hand, I continue my walk. I notice the mayapples have opened their umbrellas. And as the wind passes through the trees, I wonder if the spirits of the Wyandot walk soundlessly beside me. ≈© 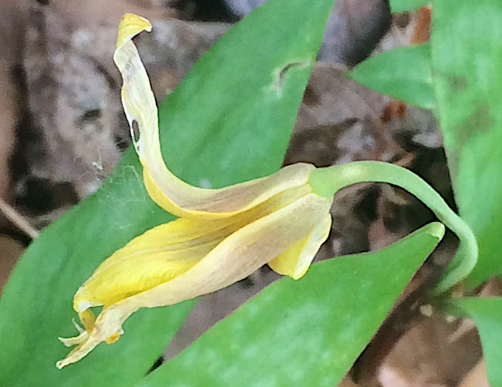 The last of the trout lilies nods in deference to the end of its cycle.

Erythronium americanum (trout lily, yellow trout lily, yellow dogtooth violet) is a species of perennial, colony forming, spring ephemeral flower native to North America and dwelling in woodland habitats. Within its range it is a very common and widespread species, especially in eastern North America. The common name 'trout lily' refers to the appearance of its gray-green leaves mottled with brown or gray, which allegedly resemble the coloring of brook trout. The range is from Labrador south to Georgia, west to Mississippi and north to Manitoba. ≈

KELLY GARRIOTT WAITE is currently researching the history of her 1908 house and the Native American woman who once owned it. Her work has appeared in The Christian Science Monitor, The Globe and Mail, The Philadelphia Inquirer and elsewhere.

Photographs by the author except where noted.

Kelly Waite has done a "misstressful" job of intertwining many worlds — Native American, Polish, middle American — into a sotto voce confession that she did dig up those trout lilies. About twenty five years ago I did the same thing in Oberlin, Ohio, and I too now confess. In fact they transplanted well and every spring surprised me in their periscopic arrival.. Keep up your place dwelling, please, because a little gratitude helps things grow.. Especially humans.

When Trout Walked on Land
In and Out with the Hiking Muse
Landscape Readings
On a Winter's Day, Circling: From a Land Steward's Journal
Grass Routes

In and Out with the Hiking Muse
Landscape Readings
On a Winter's Day, Circling: From a Land Steward's Journal
Grass Routes
Theory of Evolution: One Star in Wallace's Universe