Women of the South Against Masculine Assumptions

Category
Movements & Communities
Politics & Power
Agriculture
Women of the South Against Masculine Assumptions
by Gustavo Esteva
Published: Mar 08, 2020
Standfirst
Today, on International Women's Day, activist and educator Gustavo Esteva writes about how — in the fiercely sexist context of Oaxaca, Mexico — women are organizing to resist the patriarchal regime. "The 'hate of the living'", says Esteva, "is the masculine assumption that the artificial, produced by men, is always better than that which is produced by nature."
Body

"Probably the most important political transformation of Oaxaca is due to contributions by women." [o] [o]

We need to learn to see and experience novelty.

On February 15, the Colloquium on Native Corn Facing Transgenics was held in the city of Oaxaca, Mexico and included a variety of participants: peasant landholders and farmers, Indigenous leaders, academics and activists. The discussion, led by Ana Ruiz (a key person in the successful legal battle that prohibits, so far, GMO companies like Monsanto and Dow from locating in Mexico), centered around current challenges, what is needed to respond, and how promises and speeches by the current government do not correspond to reality. The attendees of the colloquium  denounced the continuing government policy — which has been in place for decades — and how it threatens the health of the soil of the region and the farming of the peasants under the banner of modernization. In short, these policies destroy a farmer’s capacity to produce corn.

The combination of traditional patriarchy combined with modern sexism proved a form of hell.

But as crucial as the sustainability and integrity of agricultural land and produce is to this region, and all of Mexico, an equally important outcome emerged at this colloquium: the changing role of women in the defence of maize/corn, and the powerful effect this change is having locally.

Small producers, mainly women, now feed 70 percent of the world's population. Agribusiness, which owns or controls more than half of the planet's food resources, feeds only 30 percent. At the colloquium, someone said that in recent years probably the most important political transformation of Oaxaca is due to contributions by women. For them, the combination of traditional patriarchy combined with modern sexism proved a form of hell. Many had no choice but to suffer. But others stepped forward and dared to say, “Enough!” 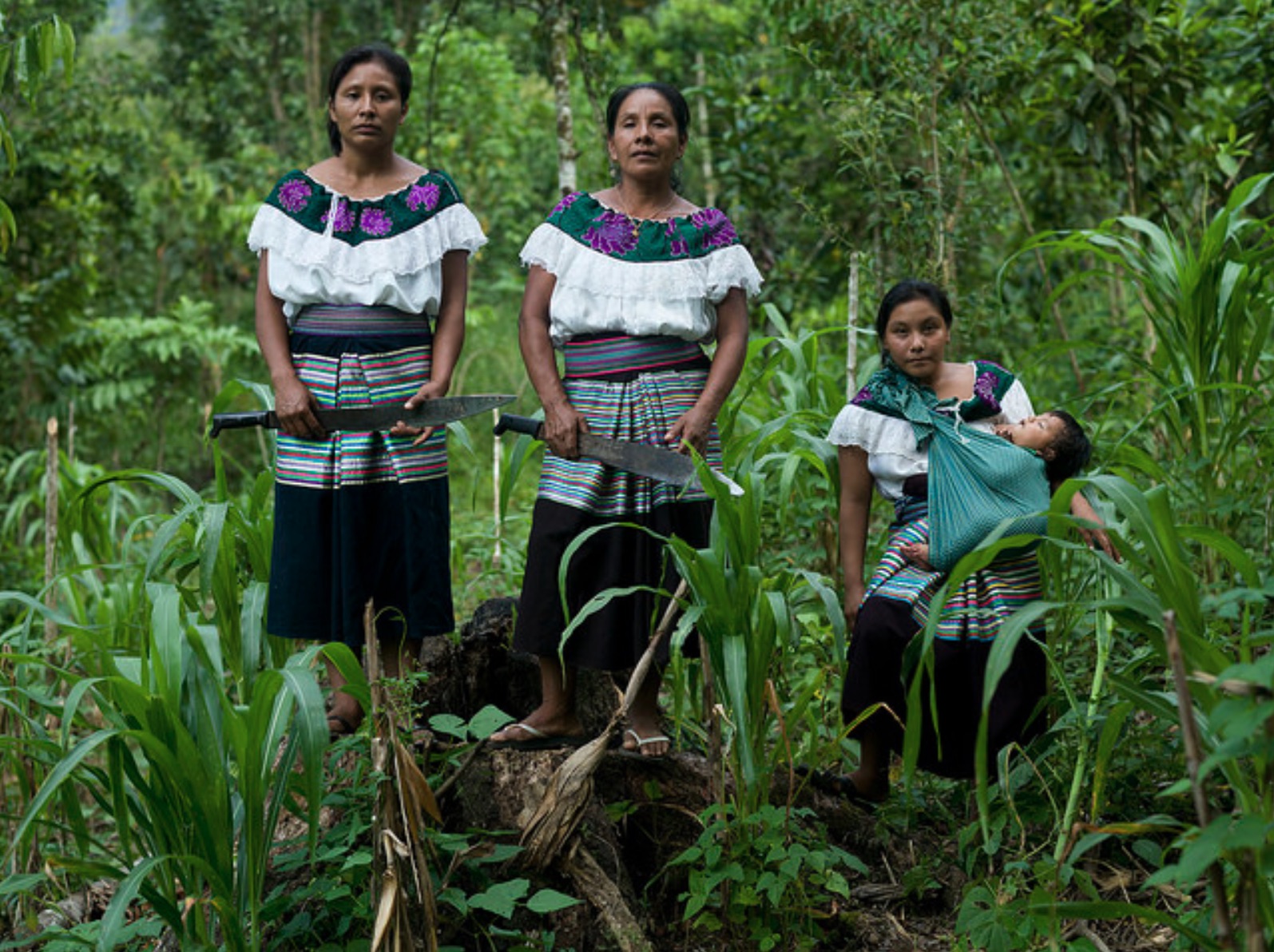 Women representing four generations from a maize farming family in Chiapas, the Mexican state adjacent to the state of Oaxaca. [o]

In the fiercely sexist context of Oaxaca, it’s necessary to recognize what this means. These women have made the courageous decision to do what until recently seemed unthinkable: to take the lead for change. With acts of immense value, they achieved an astonishing boost. However, for this they are paying a high price: domestic violence and the number of femicides have increased substantively. Many men can only react with violence.

Far from being an anomaly, this situation is typical. And as well, women’s mobilization on the planet has become a novel sign. To achieve an end to these effects of patriarchy — within a system that is dominating, statist, capitalist, exploitative, authoritarian, and violent — it is not enough to focus on the legitimate claims of equity in wages, employment, hierarchy, and the rest. Women are now dealing with and dismantling this system from the base.

With strength and clarity, millions of women, at last, are saying, “Throughout the world, male domination is unfounded.” For thousands of years it was considered normal for women to subordinate to men. It was a natural thing. Many mothers raised their daughters in this tradition: that women should obey men and submit to their will. It became normal that they could be harassed, raped, beaten. . . This is how we get to where we are today, to a situation as appalling as it is unacceptable, when on a daily basis women are killed. 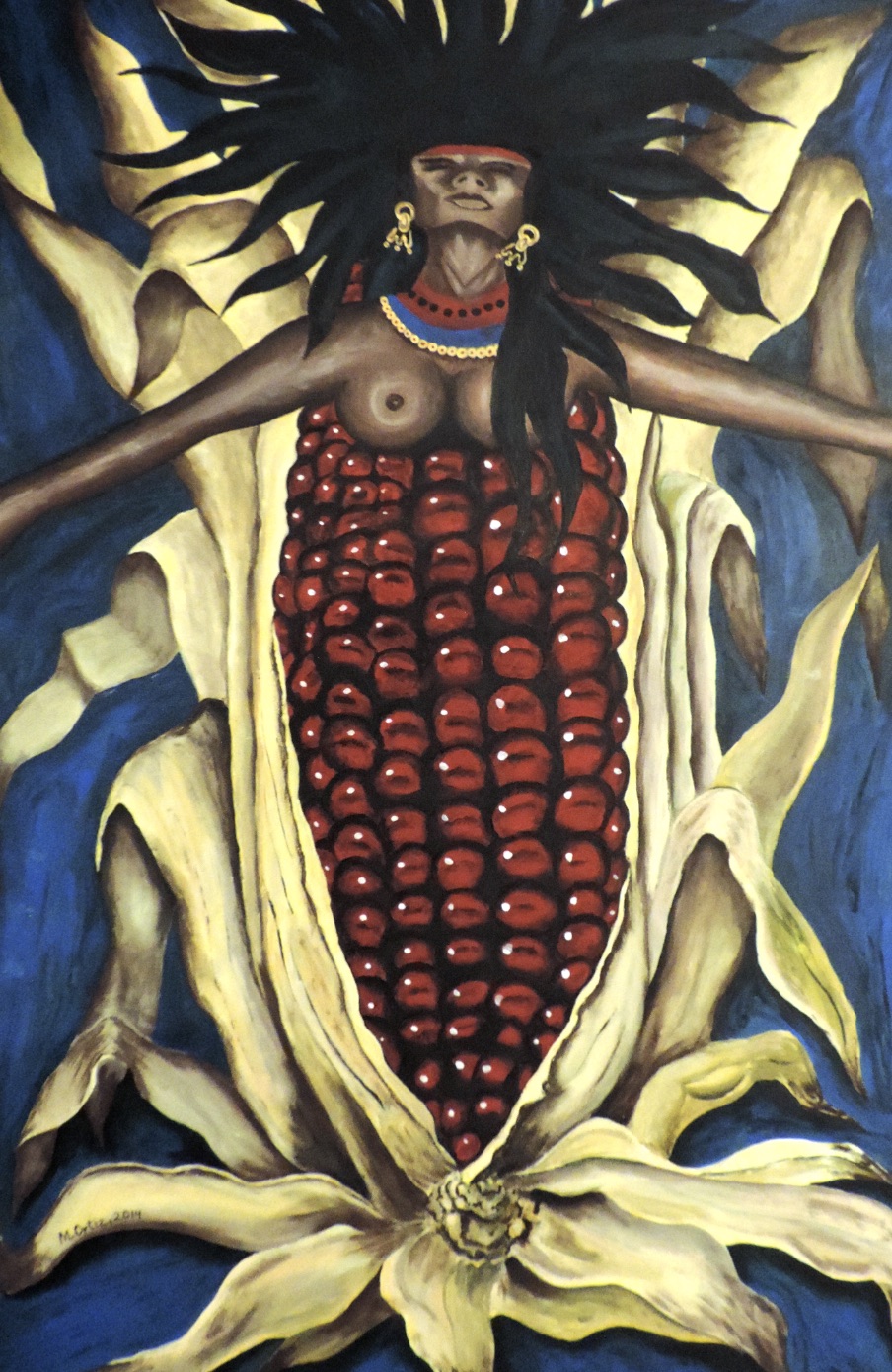 Corn is inextricably entwined in the history and traditions of Mexico. Artwork by Marcelo Ortiz. [o]

To all of this the women are saying, “Enough is enough!” It is not just the indispensable demands of: “No more deaths. No more rape. Not one more.” It is also the requirement to end this entire regime and the patriarchal principle of hierarchical dominance.

At the end of every hierarchy, we must also end the absurdity that the artificial is better than the natural; that it is appropriate to exterminate living beings created by Mother Earth, as governments and corporations do all the time, and substitute them with artificial creations; as they do, for example, with native seeds, by replacing them with those produced in corporate laboratories. This is not an easy point for some people to understand or accept. The "hate of the living" is the masculine assumption that the artificial, produced by men, is always better than that which is produced by nature. Based on this assumption, it is therefore appropriate to liquidate the living, to kill living beings, to replace them with something artificial. It is what is exemplified with native seeds, produced in a dialogue between man and Mother Earth, and that men want to destroy in order to sow in their place the seeds produced by corporations.

We can hope for the best, but we must also prepare for the worst — since the worst is coming. The agony of the patriarchal regime in its demise will unleash even more violent and destructive reactions, with barely conceivable levels of human, social and political degradation. When a regime dies or an era ends, it resorts to the forces it has left behind to pretend it is at its peak. That is what we suffer from today. So we need to foster all reserves of dignity and courage to deal with what has come upon us. We need to walk the path opened by women in one of the most radical movements of resistance in history: the anti-patriarchal revolution. 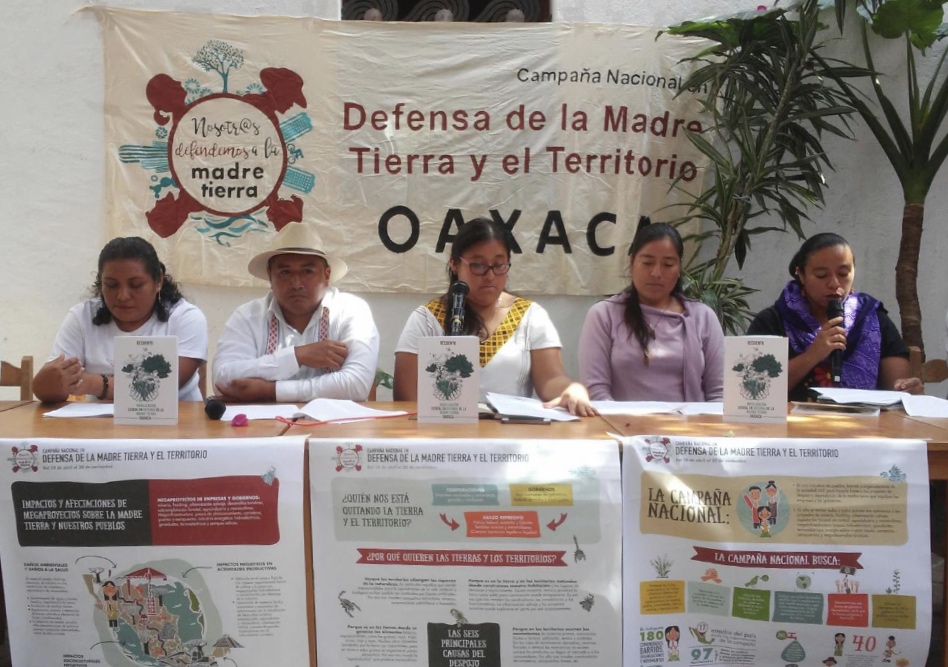 Not only the changing role of women in the defence of maize, but also the additional effects this change is having. [o]

We won't be alone. Spurred on by the call of the National Indigenous Congress and the Zapatistas for the active commemoration of an Indigenous leader assassination, a year ago, we are now articulating actions that are impressive and very well organized. For example, in Oaxaca recently, a mural and a cultural barricade was on display for all to see, and in the zócalo dozens of diverse communities and organizations constituted the Oaxacan Assembly in Defense of the Land and the Territory. It was an opportunity for us to give our word and enter into an important agreement. In an open and convivial climate, these agreements have now been created to define the fight agenda for the remainder of the year.

These agreements will return to communities and regions so that the next steps — as lucid as they are combative — can be prepared for the respective assemblies. It is clear that Oaxaqueñas and Oaxaqueños are determined to resist the wave of dispossession that threatens them and to build autonomously another possibility. And that they are in for a fight.  ≈ç

GUSTAVO ESTEVA is a Mexican activist, philosopher, economist, educator and “deprofessionalized intellectual”, founder of the Universidad de la Tierra in the city of Oaxaca, and the author of many books and essays. He is one of the best known advocates of post-development, which holds that the whole concept and practice of development is a reflection of Western-Northern hegemony over the rest of the world. He lives in Oaxaca.

This article was originally published in Spanish in La Jornada on February 24, 2020 under the title, 'La novedad radical'. Translated by Whitney Smith.

I found this article moving and the lead photograph astoundingly powerful.

In reading the piece, I was struck by the author's claim that "Small producers, mainly women, now feed 70 percent of the world's population. Agribusiness, which owns or controls more than half of the planet's food resources, feeds only 30 percent."

As an environmental writer and long-time editor of a Canadian environmental magazine, I was compelled to check the accuracy of this astounding statistic. Well, that lead me down a long sinuous road with an inconclusive end.

It seems I'm not the only one to question the validity of this commonly stated "fact."

Possibly the author can set me straight, but what I learned is that this number is far from being fact. While it may point at the truth, it doesn't seem to have been verified, probably because it would be almost impossible to do so given, for example the number of farmers in, most specifically, Asia and Sub-Sarharan Africa who grow their own rice or other crops and have them milled at thousands -- hundreds of thousands? -- of small mills. Moreover, it's likely that wheat and corn (Mexico possibly excepted)  is produced mostly by large, oftentimes corporate, farming operations.

If you are interested in following this discussion about this statistic, then I suggest you investigate this fascinating discussion. It stretches over years (from 2014 to Dec. 2019), across many borders and can be found at: https://www.researchgate.net/post/Smallholder_farmers_produce_70_per_cent_of_the_worlds_food_Whats_the_source_for_this_number.

Congrats to the author and to Wild Culture for stimulating my interest in this fascinating topic and, perhaps, the interest of others -- men and women alike.

The source of that statistic is the ETC Group in Canada (www.etcgroup.org/) which published it after a rigorous study, which is still on the web. The group has great prestige and is very reliable. It is impossible to 'prove' the figure ... but it is possible to rely on the path the group followed.

Equally deeply disturbing and inspiring piece of reportage. The simplicity of holding the seed in one's hand sacrosanct, the one you have had for eons, is a real warrior's gesture, true dignity. Isn't it funny that women have to fight to feed the planet, when women know so much from their own experience about birth and life and death? This article is a very moving story of courage and leadership. The first paragraph (as the comment above pointed out) is astonishing and the last thought is powerful also —"Oaxaqueñas and Oaxaqueños" —that women and men together are working to guard the earth's bounty. It's all heartbreaking, the death and trials of punishment connected to providing sustenance.I think I'm not naive, to say that finally women really are joining together, talking out loud, about their vision for a sustainable future. Women have always stood up for that, but now it seems that the patriarchal forces are cracking under the force of the new found collective of enough! and not any more! and me too! and here again, 'THE SEED' what could be larger? Defensa de la Madre del Tierra!!! Thank you for your article Senor Esteva, I hope you will follow up with more information, how the actions are being carried out and affecting the communities.

Women of the South Against Masculine Assumptions
A Revolutionary Moment: Morsels of Insight from Chris Hedges' Wages of Rebellion
How the Right to Assembly Gets Fudged
In Polls We Trust
The Trudeau Restoration

A Revolutionary Moment: Morsels of Insight from Chris Hedges' Wages of Rebellion
How the Right to Assembly Gets Fudged
In Polls We Trust
The Trudeau Restoration
Acting Like It Matters: John Malpede and the Los Angeles Poverty Department