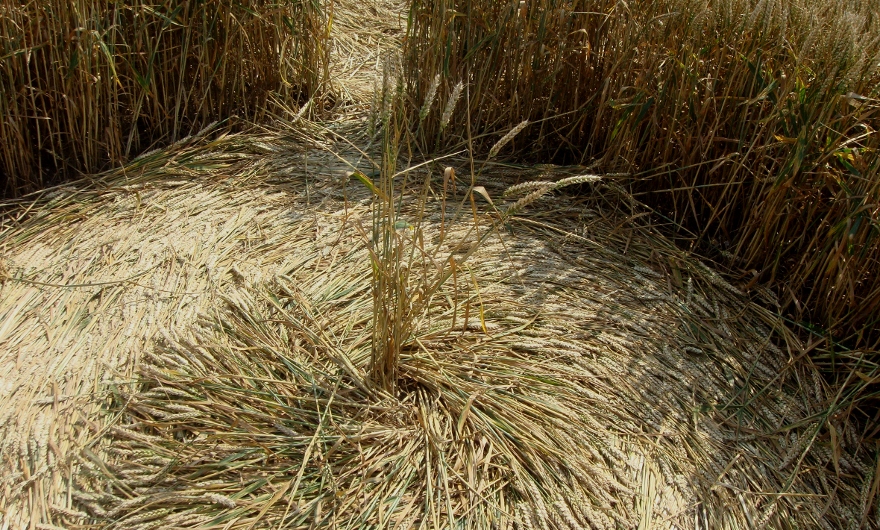 Photograph by the author.

AS the trees take on their autumn colours and the harvest is gathered in, no trace remains of the crop circles which graced the wheat fields of Wiltshire over the summer. Fortunately, the pick of the crop has been photographed from the air and the images posted online, creating a more permanent record of these extraordinary works of art.

Bigger and bolder than Anish Kapoor, and more covert than Banksy, the circles have a habit of cropping up overnight in the fields of unsuspecting farmers. There are many and varied theories as to how these designs are formed – rope and planks of wood; rumours of remote-controlled ‘orbs’… – but even though the most rational explanation is that they’re man-made, a sense of mystery still lingers: not only in terms of exactly how they’re created, but why.

As one of the world’s most famous locations for crop circles, Wiltshire attracts visitors from near and far. A typical coach tour might include visitors from Europe and America, some armed with long lenses and huge tripods, a few with dowsing rods or pendulums to pick up any unusual geomagnetic energies, others simply there to commune with nature and admire one of the world’s largest outdoor art exhibitions. 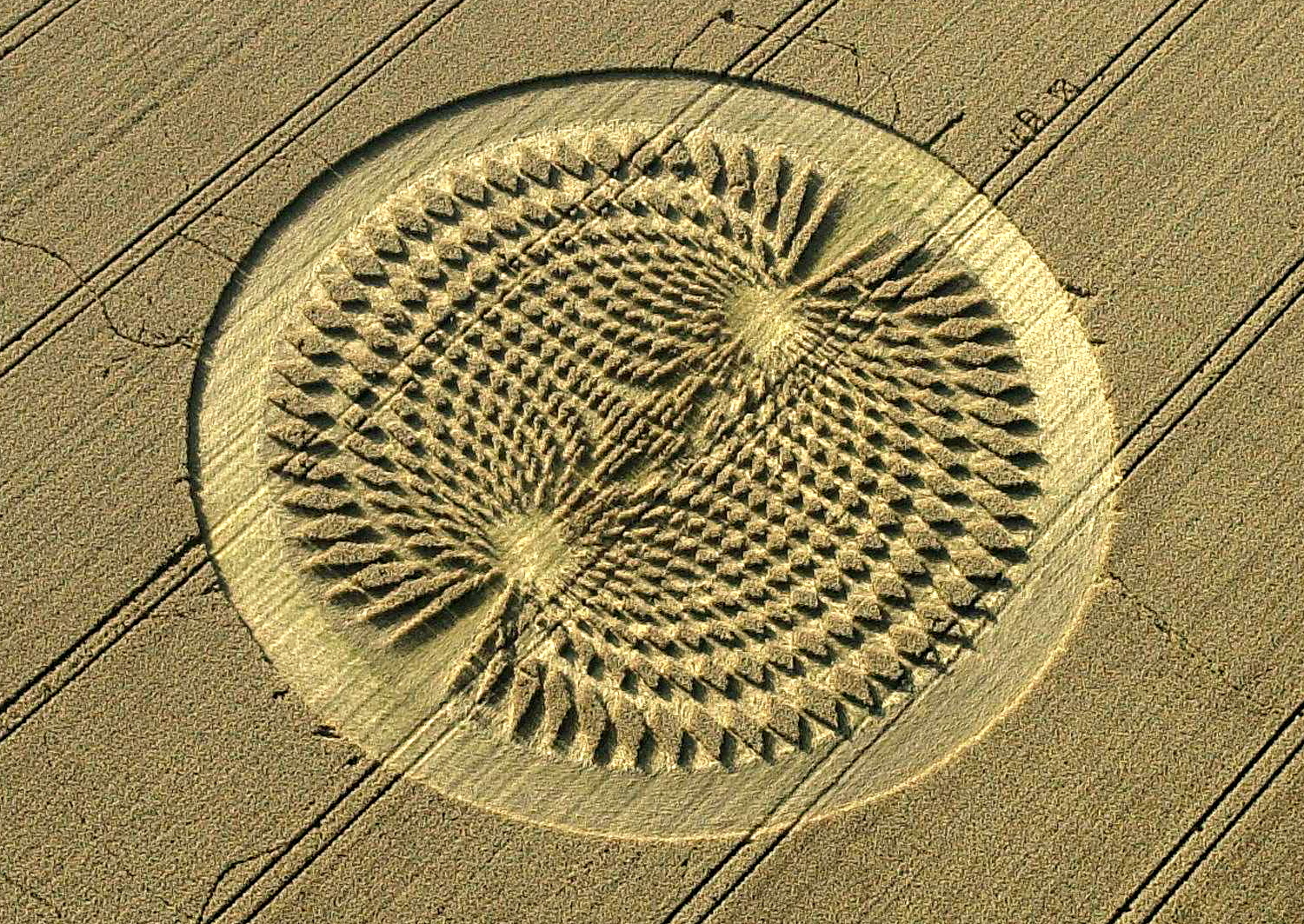 Police in Wiltshire, England urge farmers and landowners to report damage to fields caused by the creation of crop circles. This intricate circle appeared in August 2000.[o]

Not all farmers are keen on the prospect of finding a crop circle on their land – one man was arrested in 2000 for causing criminal damage after making a crop circle near Devizes, Wiltshire, and later fined £100 and £40 costs. But those farmers who do welcome visitors often place a collection box in the field, for donations in return for access to this unusual tourist attraction.

Planes buzz past occasionally taking aerial shots, which give an overview of the size and scope of the designs, but the true appeal of going on a field trip is to get the grass roots experience. At ground level, it becomes apparent that the stalks are bent at the nodes, rather than broken, swirled obediently into patterns, as if bowing to a higher purpose. This is nature tamed to an intelligent design.

The curve and sweep of the circles bring a soft, flowing form to counterbalance the angular lines that mark the boundaries of the fields. The neat plots of land reflect man’s limiting, linear view of the world; while a circle is infinite, mirroring the abundant expansion of nature, the cycle of the seasons, the unstoppable life force of growing things.

The designs often contain the golden ratio, a harmonious geometrical relationship between two measurements in the ratio of 1:1.618 . . .

These circles are full of imagery and symbolism which stirs the imagination by tapping into both the individual and collective psyche. Take one typical formation at Windmill Hill in Wiltshire this summer, which has been described as resembling, variously, a trident, a sword, a wand, and a wormhole – images of myth and storytelling, from the ruler of the planet Neptune, through the swordplay and sorcery of King Arthur, to science fiction or, indeed, fact.

This formation also bears some resemblance to the original lay-out of nearby Avebury Henge – once the largest in the world – with its approach path leading to two concentric stone circles. Perhaps unsurprisingly, Avebury, as well as other ancient sites like Stonehenge, and Silbury Hill, are popular spots for crop circles. A glance at a map of the area reveals eight white horses carved into the chalk hillsides – clearly, art in the landscape is as old as the hills in these parts. 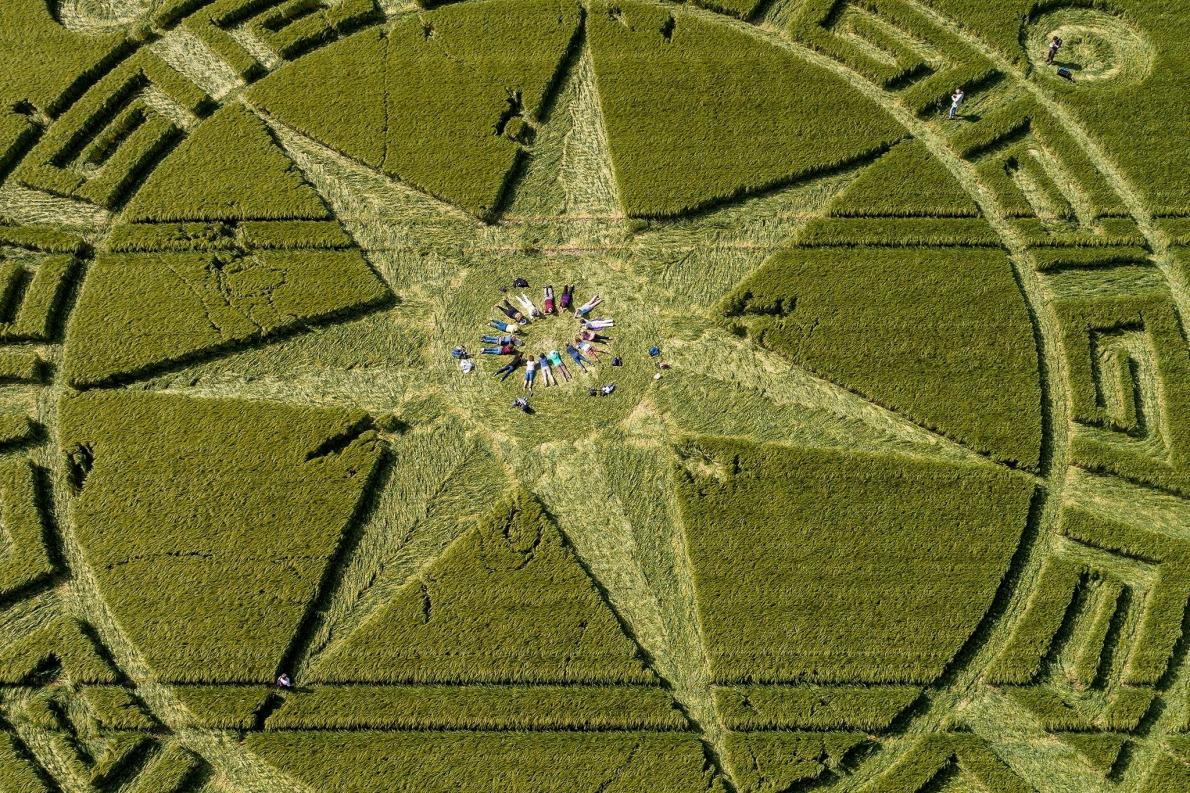 Beyond the aesthetic appeal of the artistry and imagery, the circles can also speak to us on an intellectual level, through the international language of pure mathematics. Crop circles often reference sacred geometry, which contains the measure of man, of nature and of the universe, expressed in harmonic proportions. The flower of life mandala cut into the crop at Waden Hill near Avebury in July, for example, is designed to represent the mystery of creation: variations of this symbol have adorned sacred sites in many countries over the centuries, from China’s Forbidden City to early Christian churches. The oldest known representation of the flower of life in the Temple of Osiris at Abydos in Egypt date from at least 6,000 years ago, but the significance of these forms lives on. The repeated pattern within the Waden Hill mandala has recently been likened to the process of cell division.

From seashells to a spiral galaxy, the Parthenon and the Pyramids to Leonardo da Vinci’s Vetruvian Man: some argue that sacred geometry underpins the world we know. Similar mathematical principles are found in the crop formations, whose designs often contain the golden ratio, a harmonious geometrical relationship between two measurements in the ratio of 1:1.618 (when the ratio of the sum of the quantities to the larger quantity is equal to the ratio of the larger quantity to the smaller one). Represented by the Greek letter phi (φ) after the Greek sculptor Phidias, this ratio is considered to bring beauty and balance to art and architecture.

A significant number of circles also display an in-depth knowledge of astronomy, depicting lunar cycles and planetary orbits, in what can seem like a kind of cosmic calendar. Some appear to refer to particular dates or astronomical events, such as eclipses, solstices or solar flares. This invites us to consider our place in the universe, with the designs on the ground reflecting what’s happening in the heavens. As the corny old saying goes: “Look to the stars – but keep your feet on the ground”. 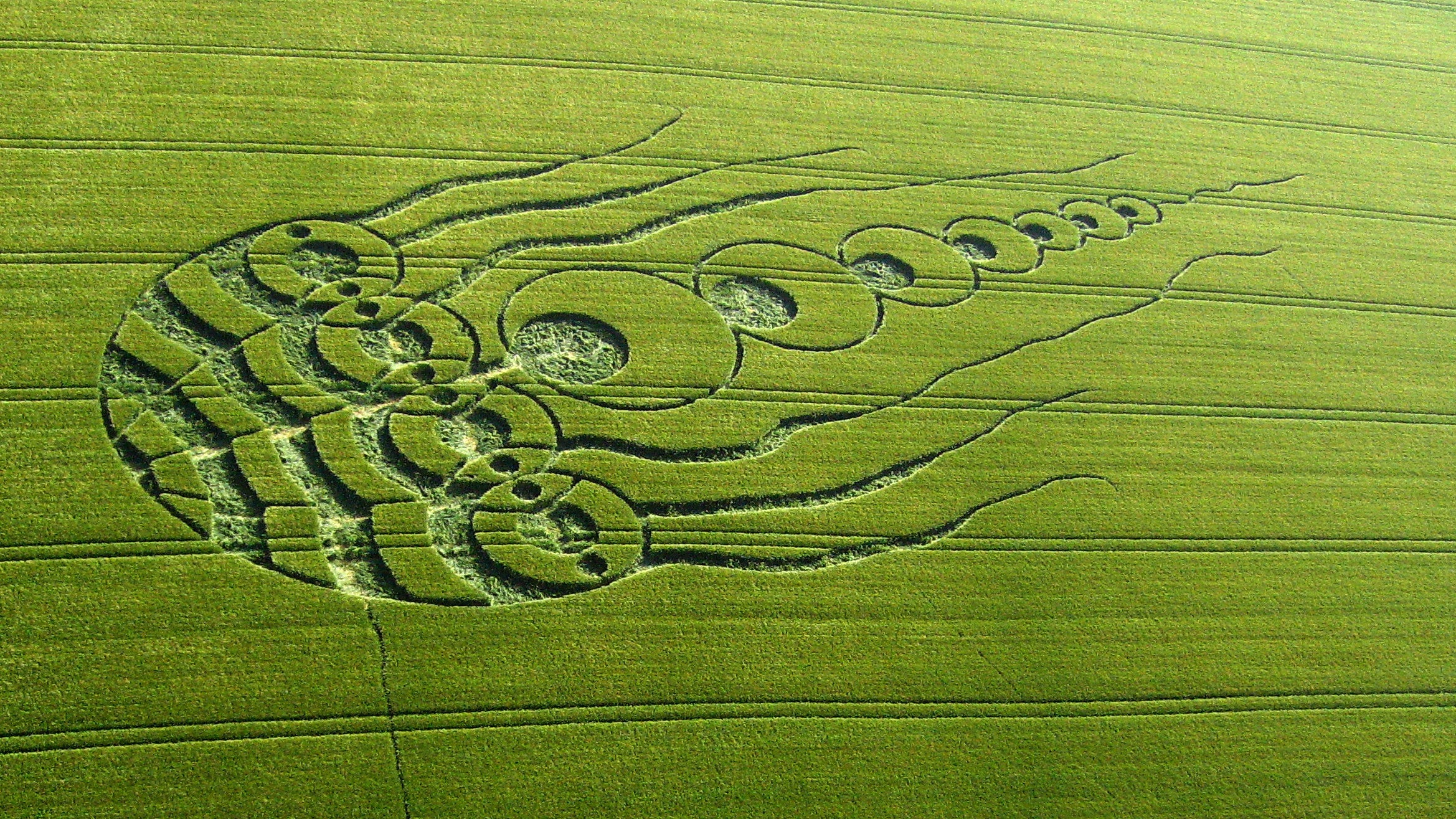 The crop circles remind us of ancient wisdom which has been all but forgotten with the onslaught of modern technology. What have advances in science brought to the land? Factory farming, with its disregard for animal welfare, controversial GM crops, pesticides linked to the disappearance of bee colonies vital to propagation – all in the name of progress. Somewhere along the way, a reverence for rural life has been lost.

The growing and harvesting of crops has always been the lifeblood of agricultural society. In times when people were more connected with, and reliant on, the land, the success or failure of the harvest was a matter of life and death. These fields still provide for both human consumption and livestock, supplying animal fodder to last through the winter months. Straw is also a great insulator and in the past had many practical uses, from stuffing mattresses to thatching roofs.

Sitting inside one of the circles, feeling the warmth coming from the stalks beneath, it’s easy to see why this versatile crop is still chosen as the medium for the message that we should work with nature, not against her. We all walk the earth and its bounty belongs to everyone, but it is a precious gift which needs to be maintained and valued as a long-term resource, not exploited for short-term gain.

It’s easy to see why this versatile crop is still chosen as the medium for the message that we should work with nature, not against her.

Instead of dismissing the past practices of rural communities through the ages as irrelevant or out of date, the crop circles suggest it is time to return to a more holistic view of man’s relationship with the environment. The circles are a dynamic mix of ancient and modern – symbols carved into crops which have nourished mankind for millennia, yet still created anew each year. These are living, breathing, works of art, and like the blooming of a flower and the fall of autumn leaves, a temporary installation, one part of nature’s riches and the passing of the seasons.

Come harvest time, the wheat is made into the flour, the flour into bread. The bread is sold in shops, bought and consumed. The circle of life is completed. The crop circles urge us to reconnect with the land, to see ourselves as part of the miracle of creation and to return to a more harmonious relationship with nature. The work of the circle-makers is over, until next season.

ANGELA LORD, born and bred in South Yorkshire, with a background in print journalism, is currently a freelance writer based in Surrey, UK.