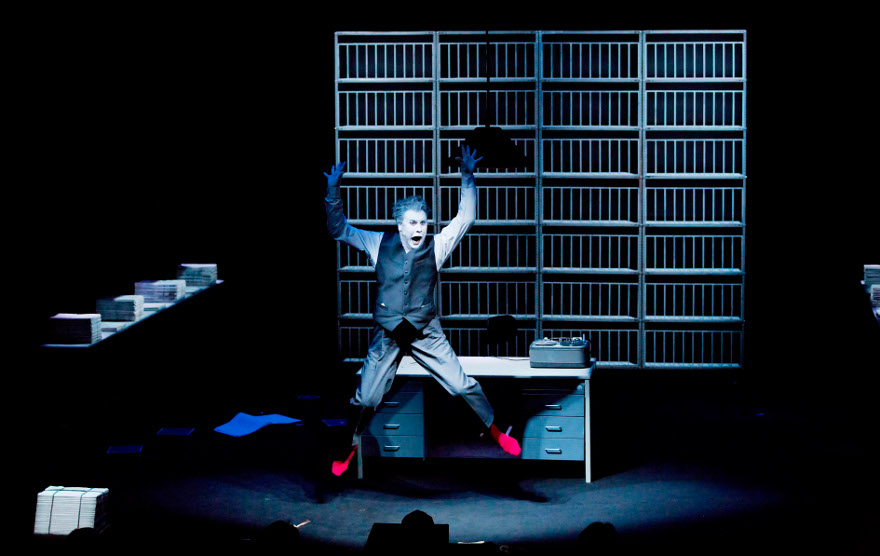 My first taste of Enniskillen’s inaugural Beckett Festival is of Raja Shehadeh, famous Palestinian diarist, musing on the politics of walking, vacillating on the question of abstraction and tactfully trying not to express his scepticism about Beckett’s political commitment. He sits in front of the collapsing fireplace of the ruins of Portora Castle, a seventeenth-century structure brought low not by sectarian conflict or the ravages of time but by a group of nineteenth-century truants from the nearby boys’ school, conducting what the tourist information plaque describes, straight-facedly, as “a gunpowder experiment.” Beneath us, the famed Irish verdure falls away to arcadian River Erne. A member of the audience compares the Northern Irish Troubles to the Israeli-Palestian conflict.

It’s almost impossible to make these wildly disparate elements resolve into a pat little story about what Shehadeh might be doing at a Beckett festival – or for that matter what we are all doing here, making what looks bizarrely like a pilgrimage to the site of Beckett’s school days (passed in the very same institution that some decades earlier had produced the truanting castle-wreckers). The talk is not obviously about Beckett. Nor, thankfully, is anything here Beckettian in the bleak, nihilistic sense in which the term is usually used. Instead, there are eccentric points of contact, from the landscape and the fascination with walking, to the political history, to Beckett’s old school hovering just out of sight in the background. They’re tantalising rather than obvious, and the oddness, the eccentricity, the incongruity of it all is fascinating and stimulating.

This all comes, frankly, as an enormous relief. As I realised somewhere over the Irish Sea, this had real potential to be a profoundly awful experience. The idea of a Beckett festival – surely an oxymoron? – was iffy enough, but coming at the end of a summer devoted entirely to reading Beckett, reading about Beckett and writing on Beckett, I had reached the point where even the mention of his name gave me a crawling sense of claustrophobia. It wasn’t just the crippled and dying characters in blank, featureless rooms, or the hauntingly repetitious language (“On. Say on. Be said on. Somehow on. Till nohow on...”), or the refusal of all points of political or historical reference. It was also the writing about Beckett, which tends to one of two paths: either burrowing ever deeper into the most minute details of the Irishman’s life, or obsessively returning to the familiar critical terrain of language, silence and human fecal matter (it’s never not appropriate to use the word “shit” in scholarly work on Beckett). After a while, it all starts to make you feel like you’re trapped inside a depressed man’s skull, banging hopelessly at the eye sockets to get out.

Even among those not immersed in Beckett scholarship, this is not an unusual reaction to the Irish playwright, if the comments and shifty looks I get when I mention him are any guide. The Happy Days Beckett festival’s great triumph is to offer a different take on the writer, putting on display a side of Beckett that is often forgotten: a delight in the weirdness of the mundane, a deep humanity, and a genius for comic juxtapositions. Where the temptation might have been to stud the town with shrines to Beckett and his life, the festival instead experiments with odd incongruities, playful reinterpretations, and unexpected lines of influence.

Embedded in the town itself, Happy Days lodges Beckett’s work, his fans and his artistic successors in the town’s castles, pubs, schools and churches, creating a frisson of local specificity that is often absent from the works on the page or in darkened theatres. A stall by the river, decorated with some of Beckett’s more famous lines (“Fail again, fail better”), serves delicious homemade burgers. Anthony Gormley’s striking metal tree is set in the Grand Yard of the stunning Castle Coole. The yard leads into the castle’s kitchens and servants’ quarters, where a sound installation based on recordings of Molloy and Company plays hauntingly against soothing geometric decorations of stones and everyday objects. There is comedy in the pubs, music in the churches, paintings in foyers, sports on the streets and talks in the school hall.

The most exciting events, though, are the productions of Beckett’s own works. One of the headlining events is Robert Wilson’s iconoclastic version of Krapp’s Last Tape. Where Krapp is usually played as a sad old man, lonely and full of pathos, the avant-garde director (who also stars in this one-man show) gives us a hyper-stylised Krapp in a graphic, largely monochrome set. It combines elements of silent film-era physical comedy with a visual palette reminiscent of Sin City. This version of Beckett’s protagonist as fully externalised, comic rather than pathetic, breaks dramatically with accepted practice. But somehow it works, forcing a rethink of complacent assumptions about Krapp’s sentimentality and even his humanism. More to the point, it’s both visually thrilling and extremely fun.

At the other end of town, Lisa Dwan performs Not I in Beckett’s old school’s hall. It’s a completely different kind of production, one which takes very seriously its fidelity to the author’s intentions, but just as brilliant for all that. The play, which consists entirely of a mouth suspended two metres above the stage prattling at full speed for ten minutes, is surreal; Dwan’s performance breathtaking. After a while, the mouth itself seems to float in space. This is no doubt the event most at risk of reproducing that old Beckettian claustrophobia in its abstraction, its intentionalism and its performance in his old school, but the energy and the immersiveness of the experience prevent that. Instead, Dwan’s Not I captures something of the festival as a whole: a sense of the vitality and excitement of Beckett’s works, but also their thrilling weirdness and the wonderful dislocation that they’re capable of creating.

Alys Moody is currently finishing her DPhil on the aesthetics of hunger in modernist and later twentieth-century literature.