The Need for a Calendar

The Mayans had books, or 'codices', using glyphs, concerned with 260-day ritual counts. Only four such codices remain. [o]

April and May are the hottest months of the year in central Mexico. On its apparent trip north to the Tropic of Cancer, the sun is climbing higher and higher in the sky. On May 16th it will be directly over Teotihuacan, in the very center of the dome of the sky, and it will set exactly in front of the Pyramid of the Sun. It will continue traveling north until reaching the Tropic of Cancer on June 20th — longest day in the northern hemisphere — when it will turn around, start its trip south, and be directly over Teotihuacan on July 28 when the weather, during the rainy season, will be delightful.

That transition in weather — from almost unbearably hot and dry to the wonderful rainy season — may be the origin of Mesoamerica’s need for a calendar.

There are two principal schools of thought in Mesoamerican anthropology — the diffusionists, and that of the advocates of the autochthonous development of Mesoamerican cultures. [Autochthonous, pronounced ah-TOCK-thanus: of an inhabitant of a place; indigenous rather than descended from migrants or colonists.]

With a four-month rainy season there is no leeway — the seeds must be in the ground before the rains begin.

Diffusionists maintain that, unlike in ancient Egypt, there was no need for a precise and accurate calendar in ancient Mesoamerica. Egyptians living in the Sahara needed to know when the Nile was going to flood. If they didn’t have their seeds in the ground just before the flooding they wouldn’t have a harvest to get them through the next year. The calendar they developed spread across Mesopotamia, India, Southeast Asia and somehow jumped across the Pacific to be adapted by the Mesoamericans.

Strangely the most noted diffusionist was the same person who coined the word Mesoamerica and listed its cultural characteristics, German anthropologist Paul Kirchhoff. Kirchhoff pointed out that Mesoamerica has a dependable rainy season, beginning in late May or early June and lasting until the corn harvest in September. No need for a calendar. Farmers could see and feel the change in weather and have their seeds in the ground in time for the first rains.

Mexican archeologist Alberto Ruz became a spokesperson for the defense of the autochthonous development of Mesoamerican cultural characteristics. Ruz pointed out that the combination of poor soil in the rain forest, slash and burn agriculture, and a short rainy season made it essential for Mesoamerican farmers, especially Maya farmers in the lowlands, to know exactly when the rains were going to begin. 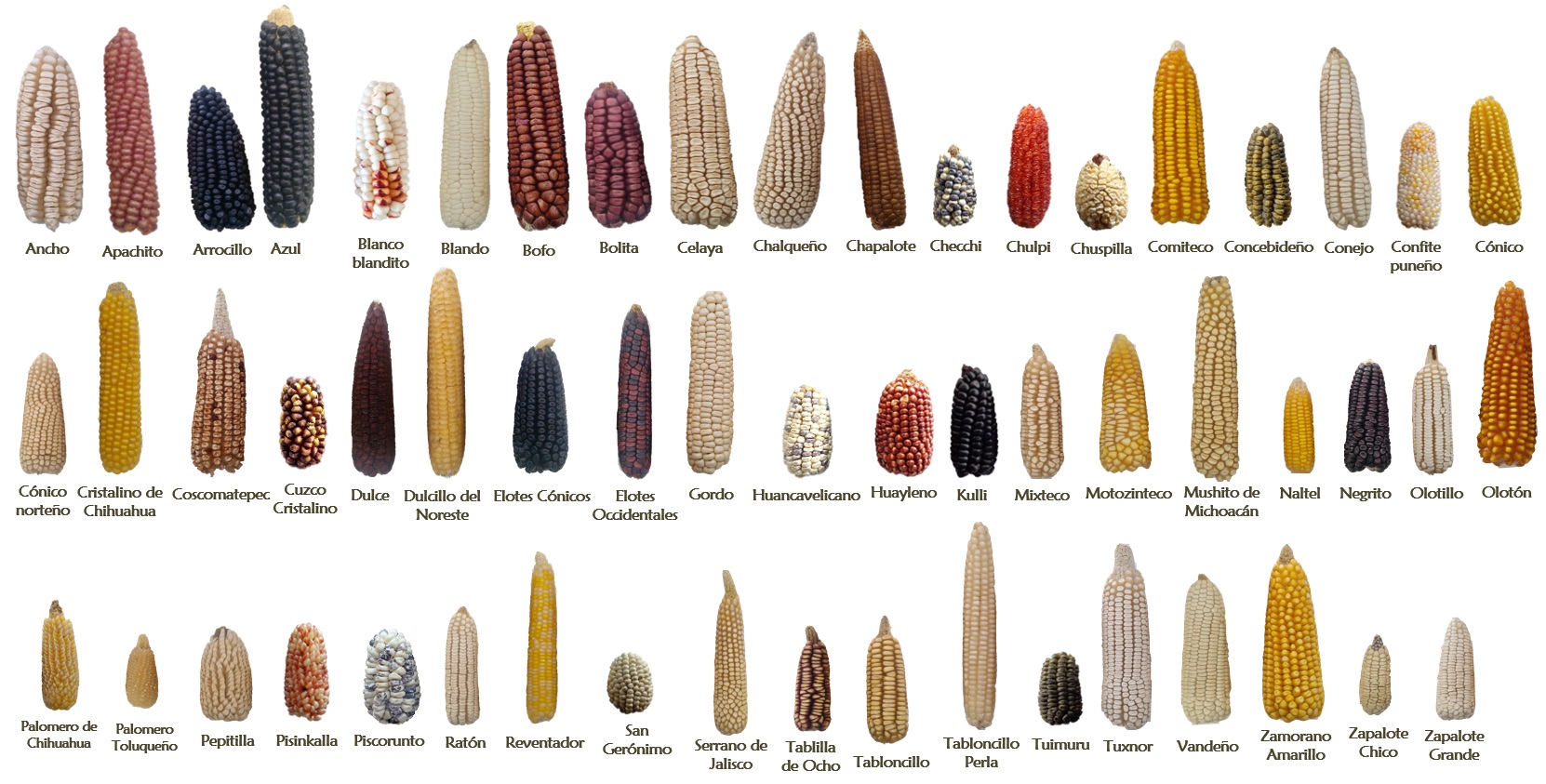 Examples of some of the 59 native Mexican maize landraces. [o]

Corn, the staple of the Mesoamerican diet, takes about 120 days to grow from planting until harvesting. With a four-month rainy season there is no leeway — the seeds must be in the ground before the rains begin. If in the ground too early they will rot.

On first glance the rainforest seems amazingly lush and fertile. However the buttress-type roots on the large trees give away the fact that the soil’s nutrients are concentrated at the surface. Roots spread horizontally from the base of trees in search of nutrients. Dense foliage keeps most of the sunlight from ever reaching the ground and drying out the soil. Rain forests cycle their nutrients as if in a greenhouse. When the cycle is broken by farmers clearing fields, land in the Mayan central lowlands (northern Guatemala and on south into Honduras) can only be used efficiently for two years before being left fallow for seven to ten years.

The Yucatan Peninsula’s soil is even poorer. After using it for two years traditional farmers leave it fallow for fifteen to twenty years. 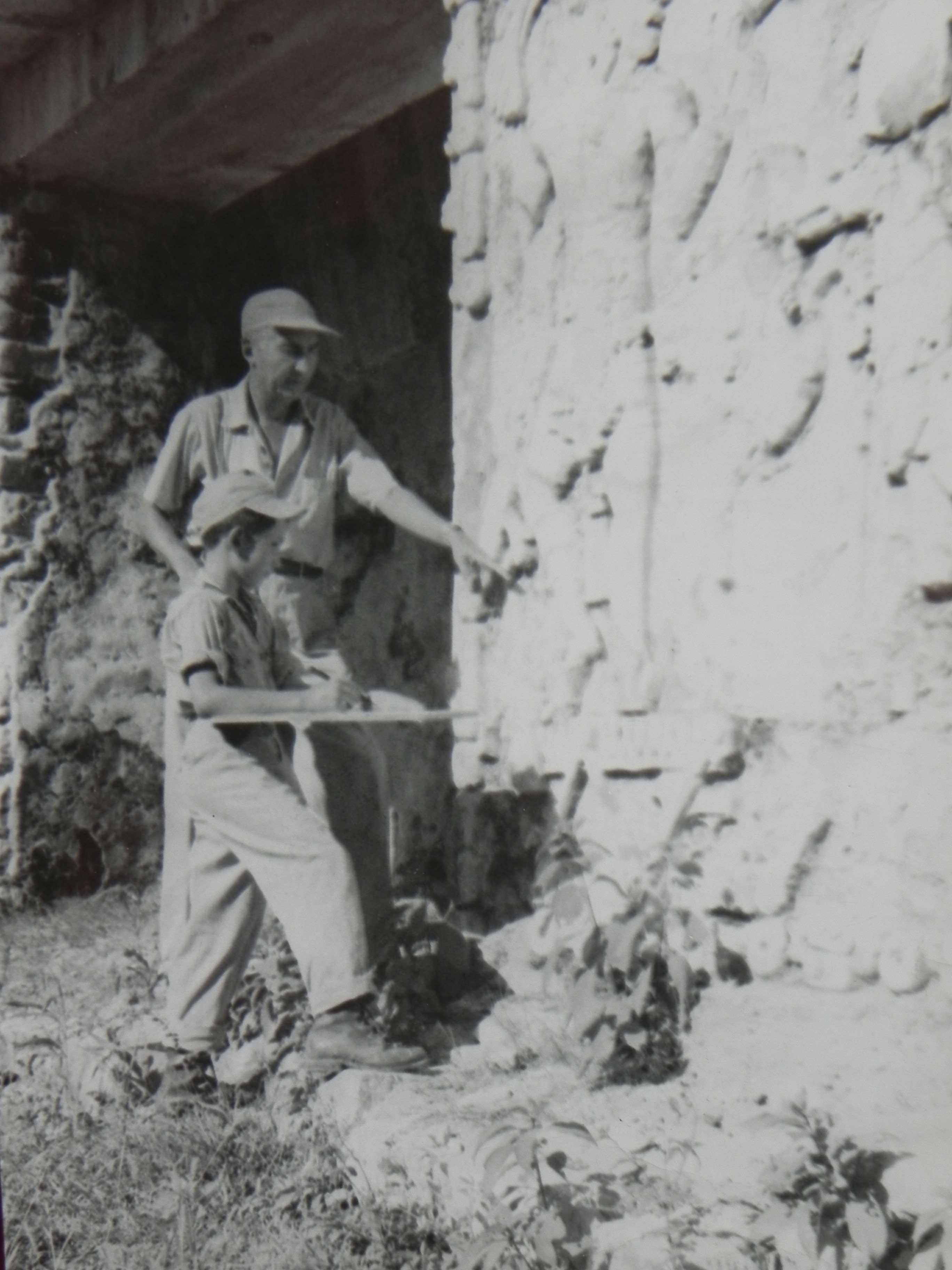 Every two years Maya slash-and-burn farmers cleared a new field. They would do so in October. The longer the cuttings were allowed to dry before being set on fire, the more land there would be on which to plant. However waiting until the rains began meant the fire would not burn well, leaving nowhere to plant.

Ruz suggests early Mayas watched the sun. When it was directly overhead at noon, it was time to burn the fields and plant the seeds. They went on from there to perfect their calendar, reaching the astonishing precision of it being one ten-thousandth of a day more exact than the Gregorian calendar we use — and only two ten-thousandths of a day from modern astronomers’ calculation of the true length of a year. ≈ç

CHARLIE GOFF is an educator, tour leader, story teller, translator and interpreter of Mexican life and culture. He is a founder of the Cemanahuac Educational Community, a Spanish language school in Cuernavaca, Mexico.

CAROL HOPKINS is a Cuernavaca-based educator.

The writings of Goff and Hopkins have appeared Mexico News Daily, the largest English newspaper in Mexico, and in Charlie's Digs, where this article first appeared.

The Need for a Calendar
A History of the World, Written in Rings
Circular Arguments: Crop Circles, Art and Symbolism
Rules for Revolutionaries: How Big Organizing Can Change Everything
Banking Ships: Designer Tobias Revell's Projected Futures

A History of the World, Written in Rings
Juggling Priorities
Many Ways of Looking at a Wildfire: The California Example
Overcoming the demands of Eco-Commerce
George Monbiot: Feral - Wild Boar