Riding big waves in the spirit of eco-feminism

Category
Research
Toxicity
Waste
Riding big waves in the spirit of eco-feminism
by Herbert Wright
Published: Apr 28, 2018
Standfirst
Through some serious weather in the Atlantic, a molecular soil biologist and an eco-sailor take an all-female crew to measure toxics in the ocean — and their bodies. Part 2 of a 2-part series.
Body

LONDON — On November 12, 2014, the 14 women of eXXpedition Atlantic, including Lucy Gilliam and skipper Emily Penn, were all gathered in Lanzarote in the Canary Islands. There would be four days of onshore activity before they set sail, including workshops and a team-building beach clean-up. Seven of the crew were novices, and that made vital preparations like safety training even more crucial.

Their eco-vessel, Sea Dragon, had been provided by Pangaea Exploration, Emily's multi-disciplinary campaigning and marine life conservation organisation. It packs a lot into its 22m length, including 60m2 of living space, and its green credentials include solar panels and micro-wind turbines. Sea Dragon's main propulsion of course is the wind, and it can let out 370m2 of sail reaching up a 29m-high mast. But in the case of no wind, there is a diesel engine.

Lucy explains that she and Emily wanted eXXpedition Atlantic "to be about citizen-science and engagement and telling stories. We wanted to be positive . . . to explore a problem and communicate it to the public, rather than going after government or policy-makers". That problem was plastics, 270,000 tonnes of which pollutes the ocean, and they would be tracking it using apps Marine Debris Tracker (actually co-designed by crew member, University of Georgia professor Jenna Jambeck) and Marine Litter Watch.

Her advice was to keep hydrated, eat, stay up on deck and stay positive.

"Being able to get consistent data from different people all around the world is really valuable", notes Lucy.

They would also be scooping the ocean for on-board analysis, using a plastic-sampling device built by the 5Gyres Institute (an organisation dedicated to ending plastic pollution) which would be dragged through the water from one of the spinnaker booms that captures anything over a third of a millimetre. The crew was also measuring the build up toxics in their own bodies, as part of the international Body Burden study.

EXXpedition Atlantic’s food was supplied by Organico (their breadsticks were good weapons against seasickness), Fish 4 Ever, and clothes were provided by Bam. "We basically did the whole expedition on £40,000", says Lucy, largely funded by corporations, NGOs and individuals that the crew recruits. And someone had slipped on board who wasn't going to pay — a stowaway male!

Lucy was pregnant. The father, Arjen van der Veen, is captain of the Tres Hombres, a ship that carries cargo to the UK for New Dawn Traders, a company that Lucy co-founded that deals in sail-shipped Caribbean rum, and soon chocolate and coffee. The Tres Hombres is special: as a tall ship, it's the only emission-free cargo ship in the world. But as a small ship it operates in a niche market separate from the normal polluting, low-pay crew-massive cargo ships. (Nevertheless, operators Fairtransport will launch a second emission-free ship in May, and they plan to build a Cutty Sark-like clipper based on the fastest nineteenth century Dutch ship, the Noah). 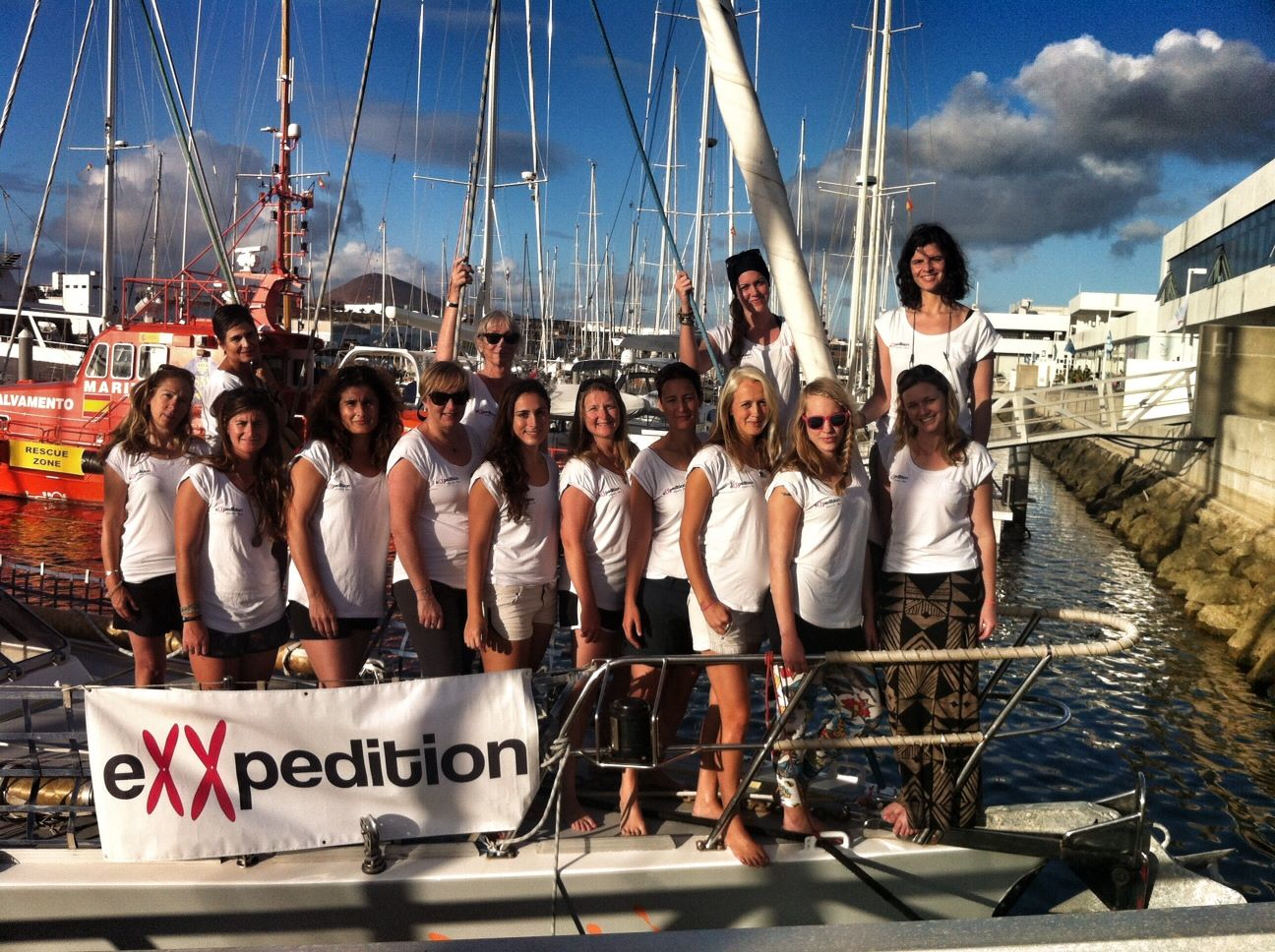 Back in Lanzarote, Sea Dragon set sail on the 16th November. A 10-knot wind was blowing and serious clouds were playing with the light, making one moment sunny and the next dark. It was the start of three days of seasickness for half the crew.

Lucy recalls, "When we were sailing through a Force 6 [39-50 km/hr, 21-26 knot winds] and all these girls being sick, Emily and I thought: 'Shit, we've sailed so much but for them it's such an extreme environment' ". Her advice on seasickness was "to keep hydrated, eat, stay up on deck and stay positive". After they passed the Canary Islands on the second day, the rough weather didn't let up. There were 40 knot gusts, deep swells, and the boat was tilting crazily. Jen Pate, the expedition filmmaker, said it was like being "in a washing machine".

But by the fifth day, the storms had passed. The next day they deployed the Manta Trawl for their first sampling of the ocean.

"In our first trawl we had almost as much plastic as biota," recalls Lucy. "We were really quite shocked". The crew always quantified the biota they found, which included baby jellyfish and baby squids.

A couple of days later, a flying fish landed on deck and Diana Papoulis (who gained a PhD in Fish Endocrinology in fishily dry Arizona) dissected it — there was no plastic in its stomach. They were now trawling a lot less plastic, but Lucy stresses that "nevertheless there wasn't a sample that didn't have plastic in it. We were actually sailing south of the North Atlantic Gyre (one of Earth's five ocean-sized circular system of currents) through an area that — in computer models — should not have any plastic pollution". That gyre had never been checked, and Lucy notes that "it's important to fill in these gaps". 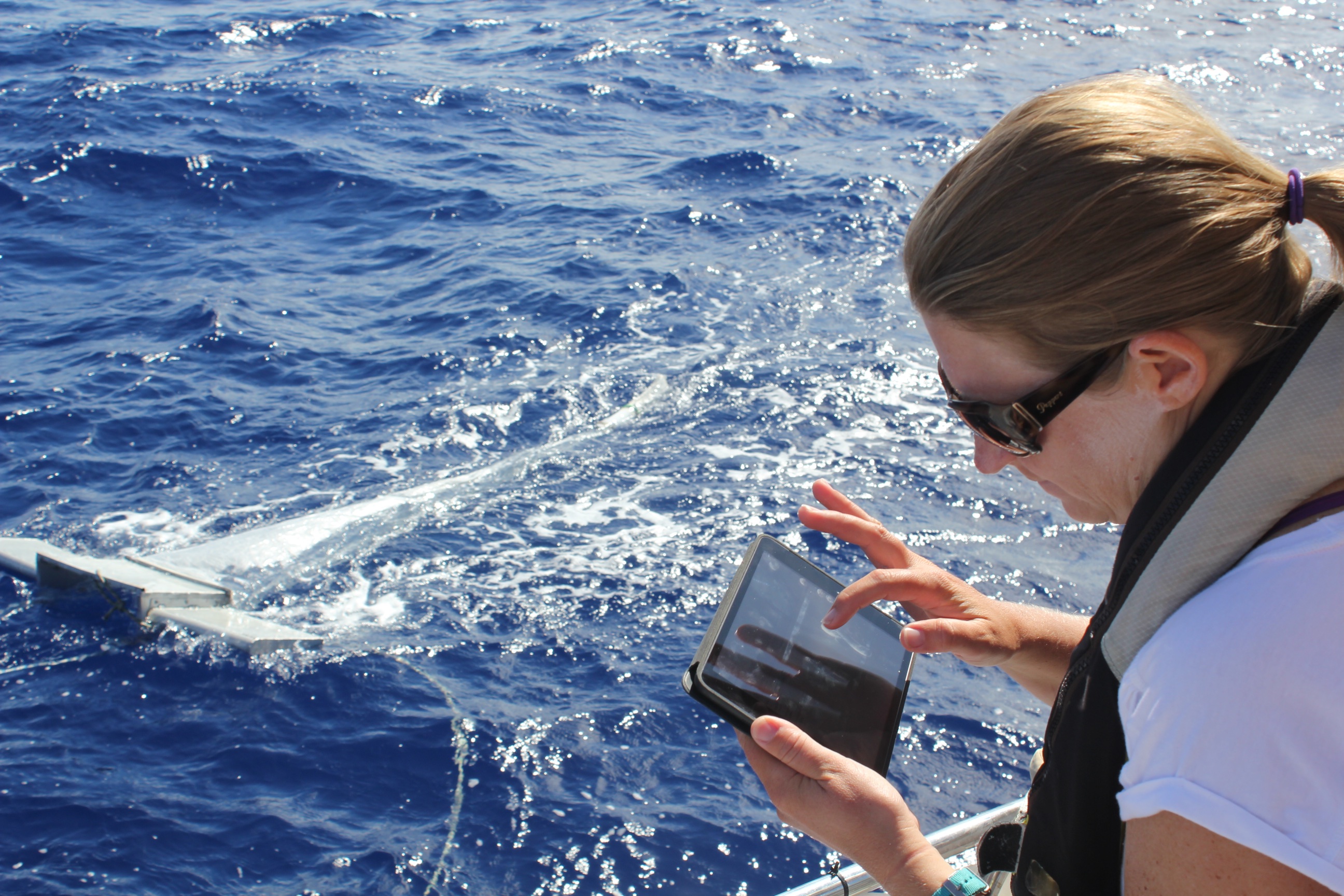 The Manta Trawl and Jenna Jambeck monitoring the Marine Debris Tracker, an app she co-designed. 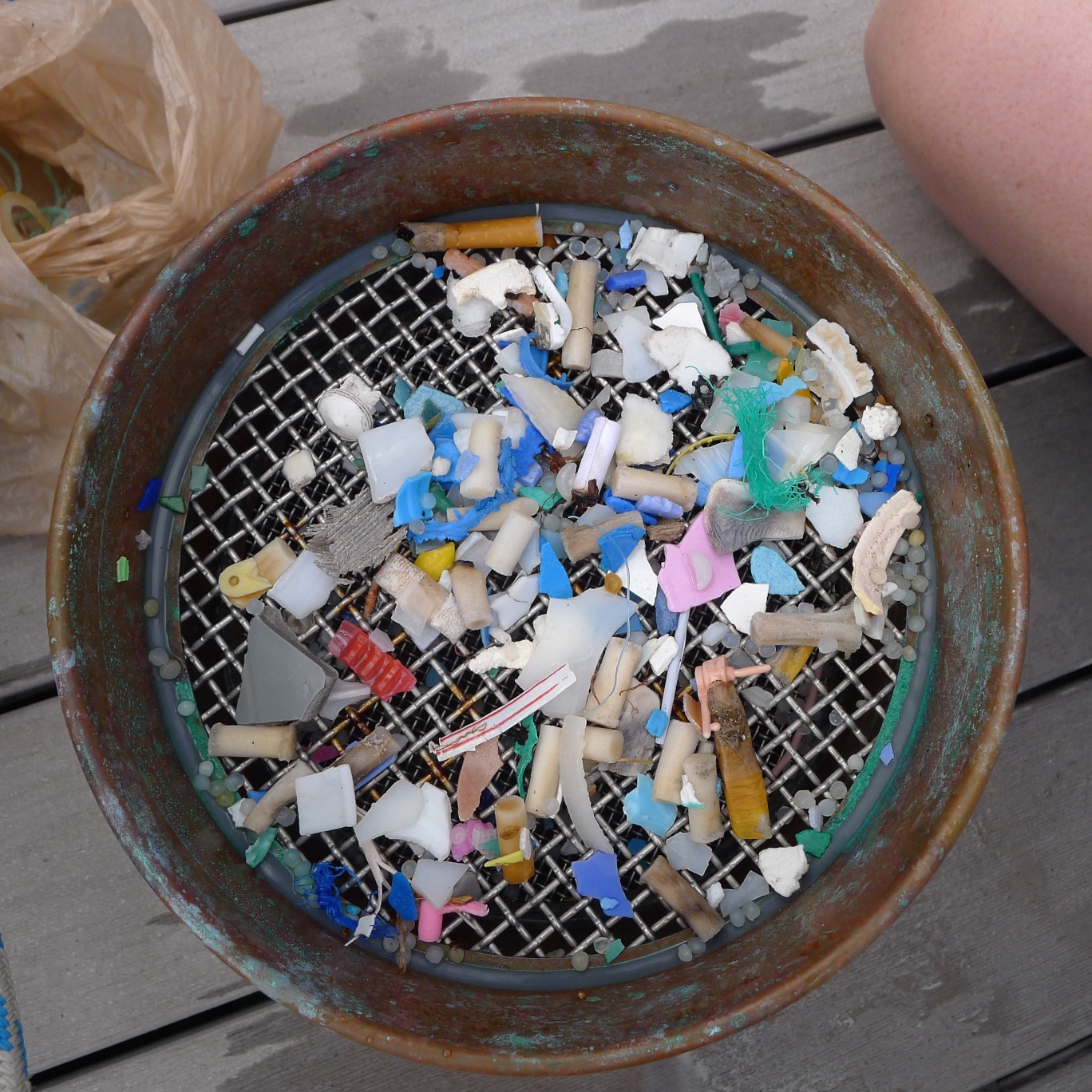 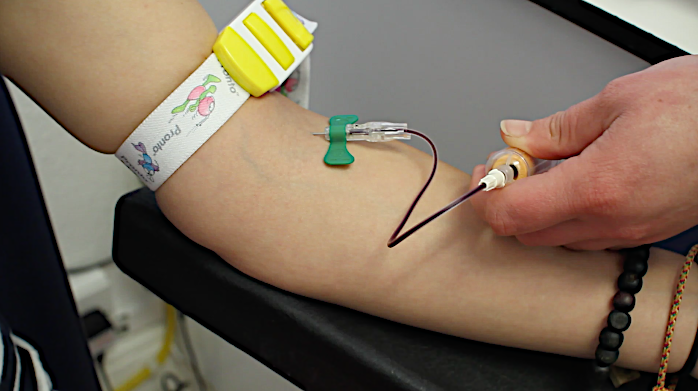 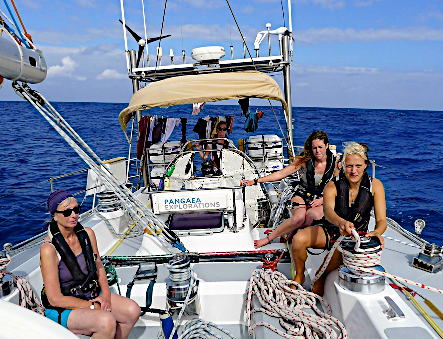 After crossing their first time zone, dinners were now in the dark. On November 26th, they crossed both the Tropic of Cancer and the voyage's half way mark — at 2090 km. Rough weather had returned, ruling out the Manta Trawl, so instead they watched Stéphane Horel's film Endocrination, about how chemical industry lobbyists subverted EU work on endocrine disruptors.

As November closed, they spotted a whale and dolphins that had spotted Sea Dragon — frolicking beside it in waters that were now a hot 28C. Chocolate supplies were now running low!

The final science work day was December 3rd, and the Manta Trawl was gathering seaweed as well as sea creatures. Across the decks of Sea Dragon came the call, "boobies!" — when brown booby birds were sighted on the lookout, snatching flying fish.

The last night on board was the 4th, and Lucy recalls "we had an incredible fire sunset ahead of us with a full crescent of double rainbow behind us." If that wasn't enough, Lucy reports that "the girls also gave me a blessing ceremony for my baby", which was led by Jenna. "It was very special for me".

I realised I wouldn't get as far as I would if I were a male scientist, and that started to really piss me off.

At 4am on December 5th, veteran yacht master Anne Baker spotted lights on the horizon — they grew and twinkled. Gradually Martinique's volcano and forest materialised ahead. Sea Dragon wended its way into port at Le Marin. They spent three days in Martinique, showing schoolchildren around the boat and telling them about ocean plastics. They also met up with Dr. Anna Kärrmen, the Swedish researcher conducting the Body Burden tests and building the database for the UN-initiated Safe Planet campaign. EXXpedition Atlantic also provided hair samples and fish scales to be analysed for mercury by Oksana Lane of the Biodiversity Institute in Portland, Maine, who are mapping mercury in individuals globally.

Lucy says that the "final evening was the best. By that point we all knew each other so well. We were so connected. We celebrated with a glass of cava and had a round of saying what we were grateful for".

After such a powerful achievement, not just for the planet but for women, how does Lucy feel when she sees the rights of women under assault across the world from conservative religion, and the attitudes of men like those revealed in the documentary film India's Daughter?

"It's hard to read what happened to that girl, Jyoti", she says. "You think that's the kind of thing that went out in the Medieval period. It's really horrifying. We did feel that feminism and equal rights and equal space was beginning to get somewhere, but it does seem that from the media stories, we're not. It's scary seeing the backlash against the feminist movement, but encouraging seeing all the initiatives kicking off'. She names Everyday Feminism as a "a wonderful resource". 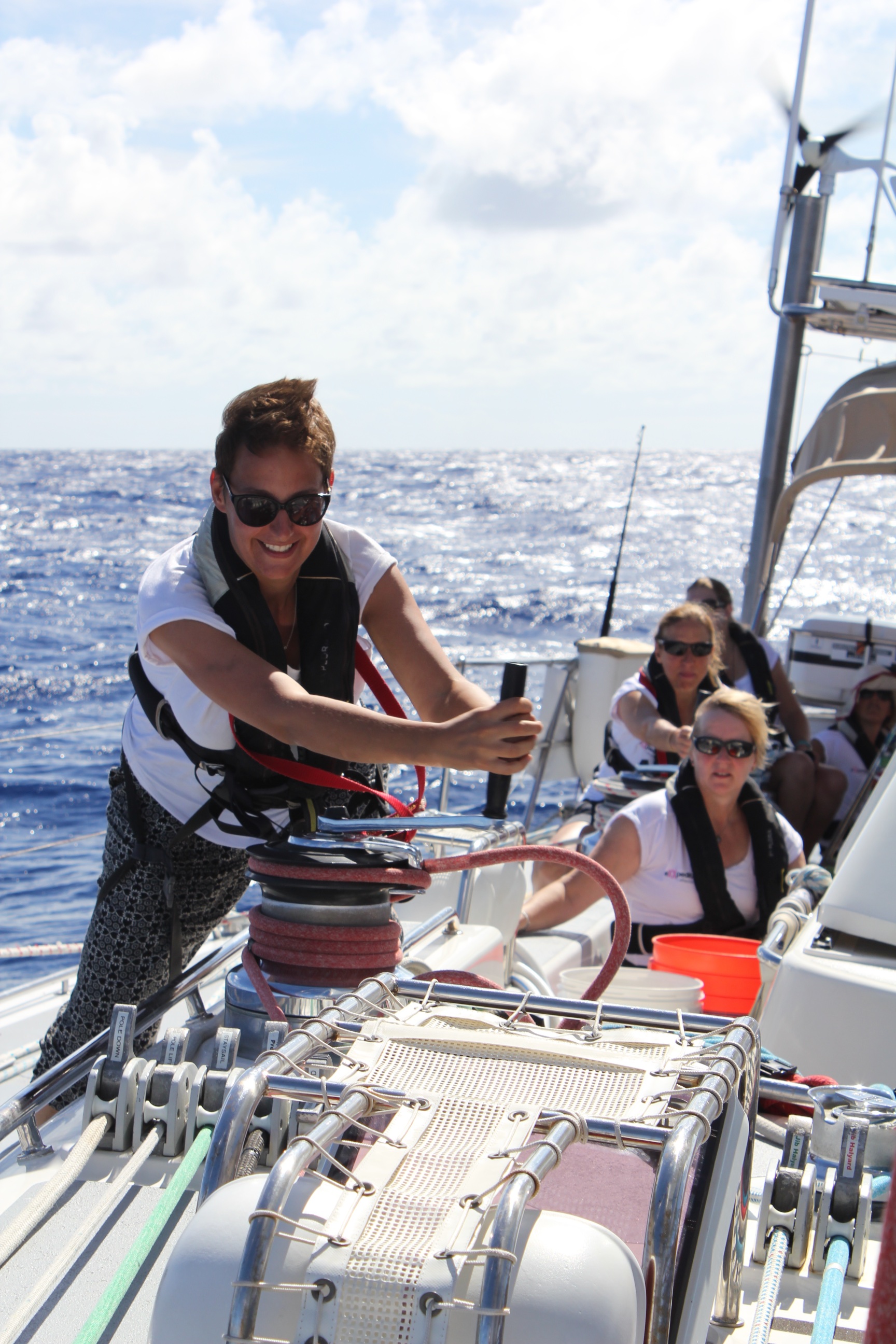 "I've always been a feminist", she continues. "I first got switched onto issues around gender and discrimination when I was a post-doc scientist and I realised I wouldn't get as far as I would if I were a male scientist, and that started to really piss me off". She was involved in Climate Rush, activists who drew inspiration from the suffragettes.

When she and Emily and conceived eXXpedition as an all-girl voyage, "partly we thought it would be super fun, and partly because we'd had some negative experiences in male-dominated sailing environments. And we saw that women were not being well represented in adventure sports, in sailing. Most sponsorship goes to men".

This November, another all-female crew on eXXpedition Ascension will sail from the Ivory Coast via the Ascension Islands to Recife, Brazil, passing through a turtle migration route. But with her baby, Lucy will be managing things on land. She says there will be a focus on waste management, as well as work on biodiversity, including fish-stocks. 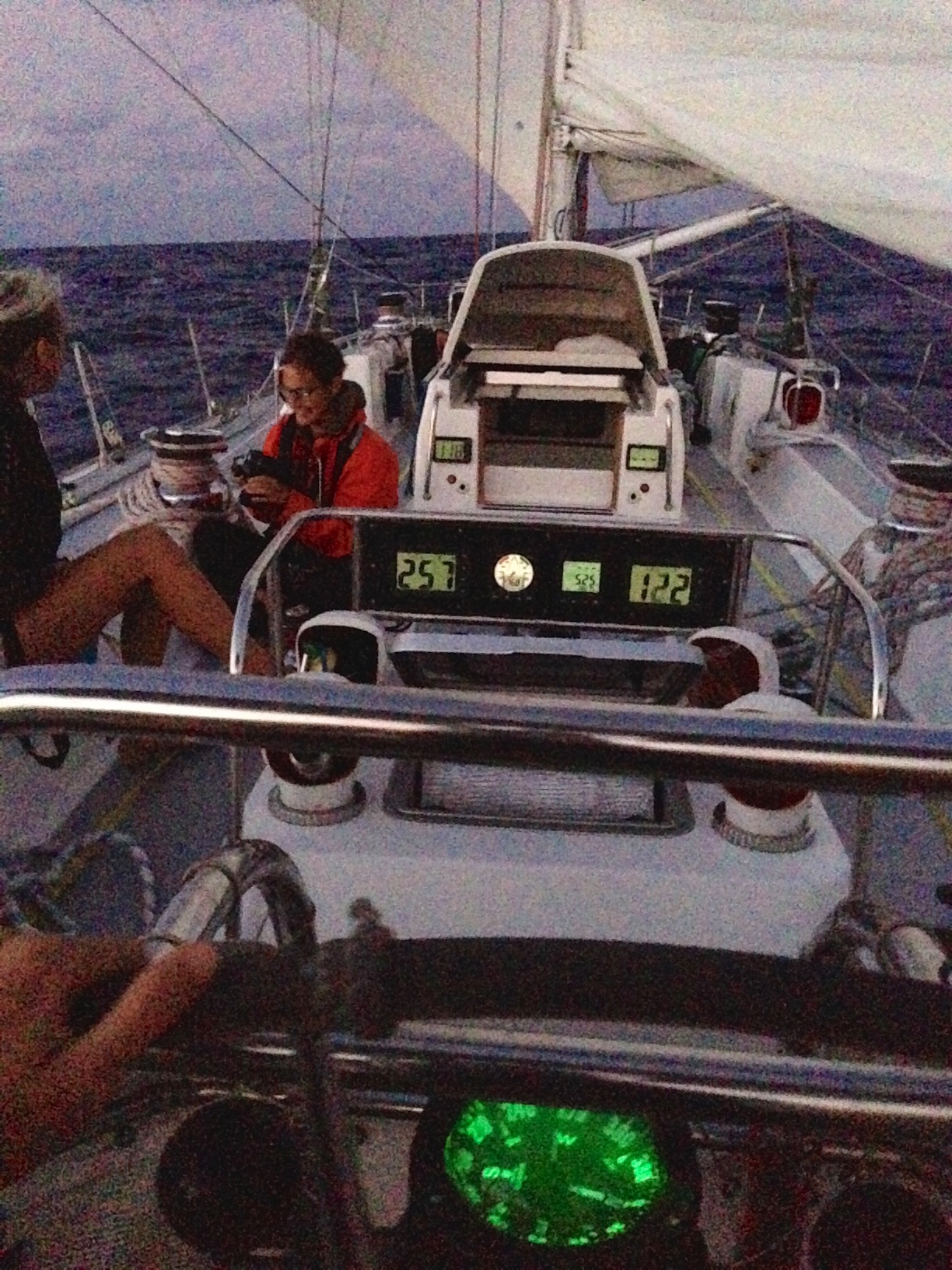 At the Sea Dragon helm at dusk. 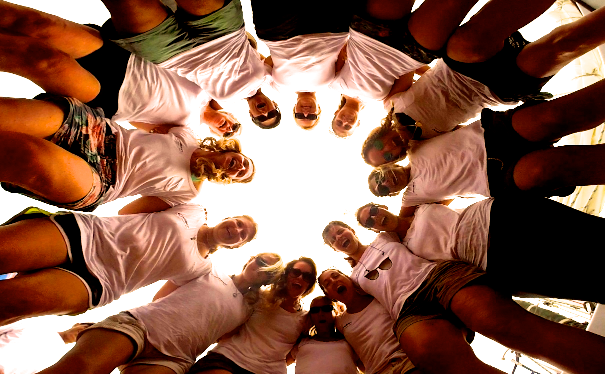 In the meantime, Jen's eXXpedition Atlantic documentary film has already been screened at the Royal Geographical Society in London. Lucy says that the "plan is to submit to film festivals, organise screenings and make available for download". It will be online on World Water Day, March 22nd.

Lucy and Arjen's baby boy will be called Thor John van der Veen, and he is due to arrive in three weeks in mid-April. "He came with his name as he was conceived between two thunderstorms in the English Channel," says Lucy, then she jokes, "Probably too much info!"

"He is a powerful reminder of why we are here," said Jen said on board Sea Dragon, "and why we need to make change now — so that children born into this world will look back on our generation not with disappointment and anger, but with pride at our actions to safeguard the planet".

READ part 1 of this series, 'Lucy Gilliam: Leading with Science and Eco-Feminism'.

This article first appeared in The Journal of Wild Culture on March 24, 2015.

Riding big waves in the spirit of eco-feminism
Lucy Gilliam: Leading with Science & Eco-feminism
Civilization Ruffled
Purity and Danger: writing, waste and the UK riots
A Reflection on Hiroshima