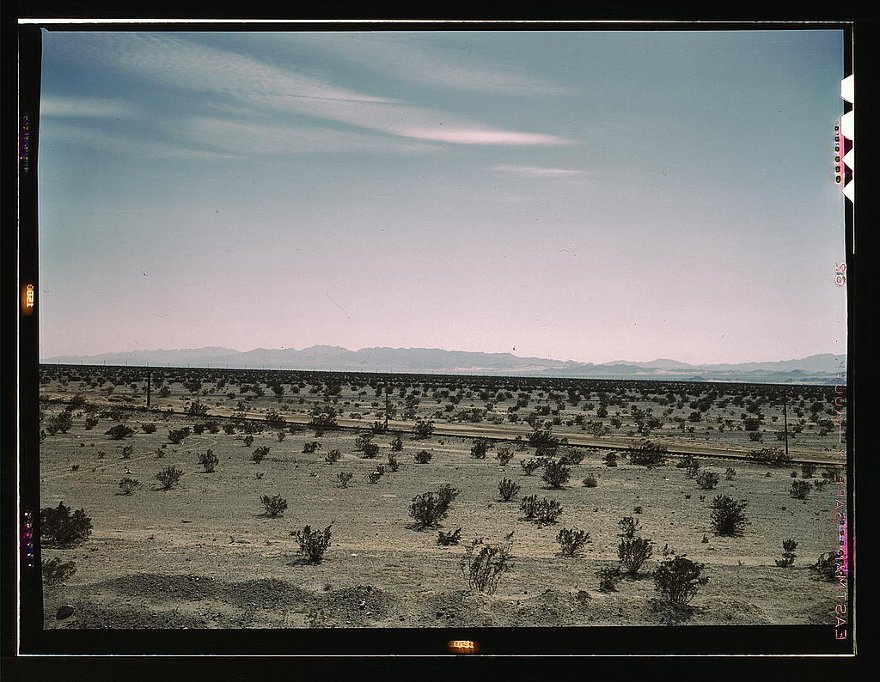 The desert begins at the edge of the city, two hours drive east from downtown LA on Interstate 10. Featureless suburbs sprawl across the flatlands of the Los Angeles Basin then thin out around the sparse foothills of the San Bernardino Mountains. A few miles from San Bernardino itself, Interstate l0 crosses another freeway and from an exit sign that reads ‘Barstow, Las Vegas and Salt Lake City’, the wide lanes of Interstate 15 snake up around steep slopes of dry grass and weathered rock towards the emptiness of the Mojave Desert.

There is no easy way to describe the almost visceral sensation of seeing the Mojave (pronounced mo-HAH-vee) for the first time. Silent, windless, in the hard, off-white glare that casts ghostly shadows between the lunar-like sierras, no other desert, not even the larger, emptier expanses of Australia, can appear as harsh or as lifeless. Yet the Mojave is, as the French philosopher and writer, Jean Baudrillard, reflected in his book, America, “an extraordinary piece of drama…the most striking spectacle in the world.”

The Mojave is the mythical Great Basin that figured prominently on early maps of North America as an unknown dead zone feared even by the most foolhardy explorers seeking a route to the Pacific across the south-west. Even today the sheer presence of the desert (to Baudrillard, “the natural extension of the inner silence of the body”), with its cathedral-like dunes, desolate valleys of grey/brown sand and fragmented rock and jagged, saw-toothed mountains, overwhelms the visitor just as it has overwhelmed those crazy enough to have tried to settle there: the skeletal timbers and crumbling stucco of long abandoned towns litter the desert and serve as a stark reminder of the Mojave’s merciless heat, sterility and isolation.

To get around the Mojave, these days, a reliable car and a large-scale map are essential. The latter can be ordered through the Delorme Mapping Company, whose Southern and Central Atlas And Gazeteer contains detailed topography of both the East Mojave National Scenic Area and Death Valley National Monument, as well as the last remaining stretch of Route 66 through California, between the dying desert townships of Ludlow and Essex, off Interstate 40. Scenes in America Deserta, by the late British author and professor of architecture, Reyner Banham is essential reading: highly descriptive, personal and entertaining with all kinds of unexpected references to architecture, metaphysics, psychology and high- and low-brow literature. It is easily the best book ever written about the Mojave or any other American desert region.