Why We Stay in Unhappy Relationships

Category
Intimacy
Psychology & Parapsychology
Spoiled Worlds
Why We Stay in Unhappy Relationships
by Mary Gooderham
Published: Feb 02, 2019
Standfirst
Many of us have experienced romantic relationships that are exciting, stimulating, powerfully engaging and, in the long run, unsatisfying or downright debilitating. In such situations, it's not uncommon for us to ask, when we tell our close friend for the umpteenth time how we're so unhappy in love, why we don't just break it off. Don't like it? Well, just leave! Uh, we know it's not that simple — at least from the inside. A team of Canadian researchers sheds some light on what keeps us in when we should be out.
Body 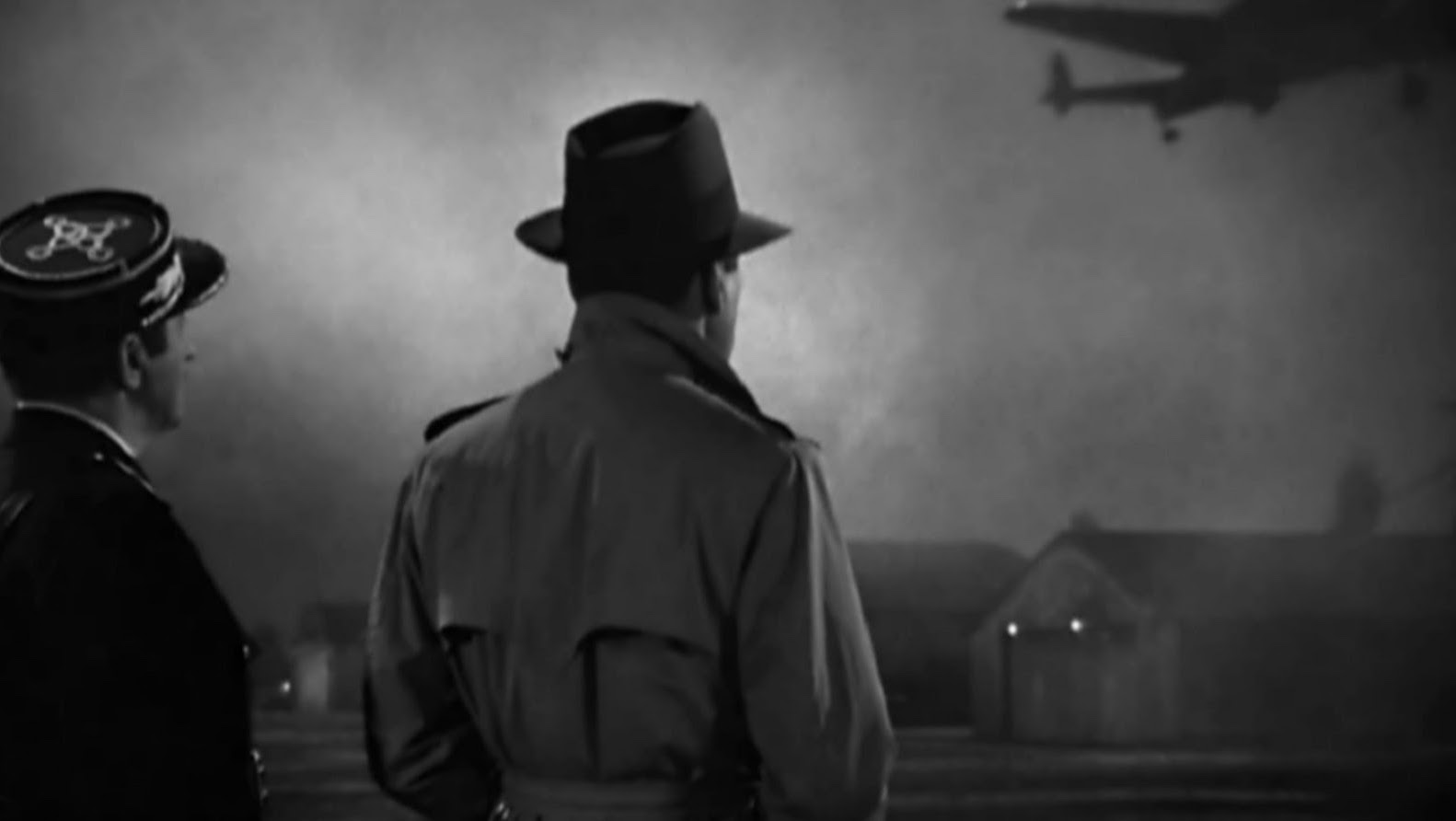 "Louis, I think this is the beginning of a beautiful friendship." [o]

Why do we remain in romantic relationships that leave us unhappy and unfulfilled? The answer in two new studies co-authored by a Canadian researcher might surprise you.

Research published in the November 2018 issue of the Journal of Personality and Social Psychology found that people are less likely to initiate a breakup when they believe that their romantic partners are dependent on the relationship. Participants in the studies, even people who had been close to breaking up, were motivated to remain in unsatisfying situations because they considered not only their own desires but also how much their partners wanted and needed the relationship to continue.

There are “self-focused” reasons why people choose to remain in a relationship, but the research shows other types of reasons . . .

“People stay in relationships for the sake of their partners, even if they feel unappreciated by them,” says Emily Impett, an associate professor of psychology and director of the Relationship and Well-Being (RAW) Laboratory at University of Toronto. She says that there are “self-focused” reasons why people choose to remain in a relationship — because of the time, resources and emotions they’ve invested in it, or because they don’t have good alternatives — but the research shows they also make “pro-social” altruistic decisions to stay because they feel their mates are committed.

The studies, headed by Samantha Joel, a former graduate student of Impett’s, with additional co-authors Geoff MacDonald, a professor of psychology at U of T, and Stephanie S. Spielmann, a U of T alumna now at Wayne State University, used online questionnaires and followup interviews to track thousands of participants. 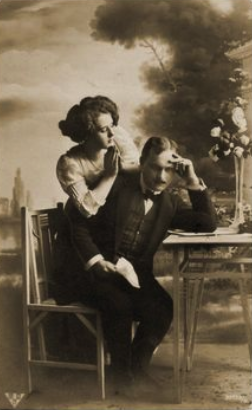 In the first study, which looked at people in romantic relationships in general, 18 per cent of participants broke up after 10 weeks, while in the second study, 29 per cent of people who’d been contemplating breakups called it quits after two months, Impett says. Across the two studies, she says that many of those who stayed did so because “they felt that a breakup would be distressing to their partners.”

Impett is a social personality psychologist who specializes in “giving” in close relationships — the “enormous daily sacrifices we make” — such as romantic partners who aren’t in the mood “in the bedroom” to parents who unfailingly care for their children.

For example, she says the RAW Lab is looking for 200 couples who know that they will soon be moving to a new city to accommodate one partner’s career ambitions, in order to investigate how they cope with the situation and challenges over time. 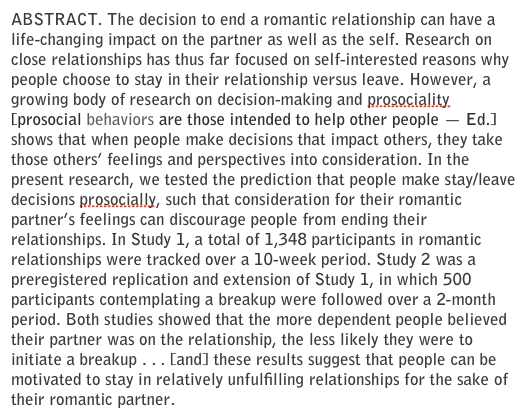 From the paper, 'How interdependent are stay/leave decisions? On staying in the relationship for the sake of the romantic partner.'

There’s a wide range of research continuing in the field, she says, such as a large breakup study looking at why people bail in relationships, and a “sex-with-an-ex" study that has so far found that sleeping with a former partner isn’t harmful to people and increases positive emotions.

Impett says the next step for the research on partners’ “pro-social” motivations is to get “dyadic data” that includes the second partner, for example, to see whether the perception that a breakup might be traumatic to the partner is correct.

“Also, if you’re staying in a relationship and you’re unhappy and your partner is able to pick up on that, that’s got to have an effect on the partner,” Impett says. 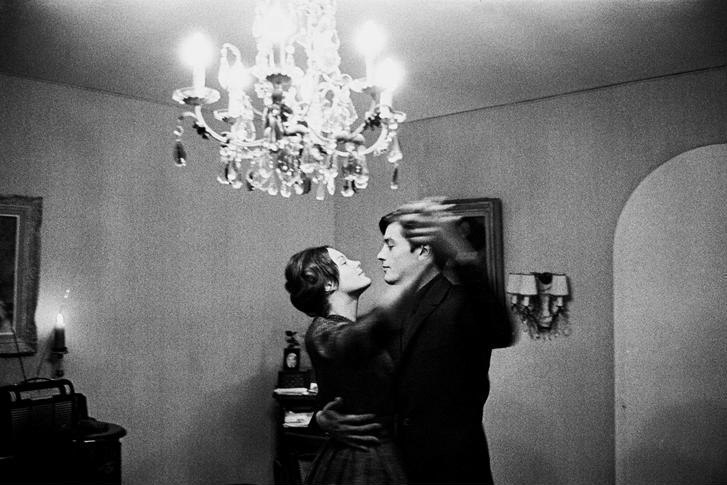 "They considered not only their own desires but also how much their partners wanted and needed the relationship to continue." [o]

The goal of such studies is to eventually partner with clinical psychologists to reach couples dealing with these challenging issues, says Impett, who notes that “everyone can relate…this is people’s lives,” but her research is statistics-based. For example, she teaches a large undergraduate course on interpersonal relationships where students “come in with their own lay beliefs about relationships and how they work,” she says. “I ask them, ‘What is the science?’”

Impett herself can appreciate the “giving” issues that she researches—she’s the mother of three children and her husband moved from San Francisco to Toronto when she got her job in 2010.http://www.utoronto.ca/

MARY GOODERHAM is a writer, editor, communications consultant and project manager in a range of fields, and occasional master gardener. She has worked as an editor and staff writer for numerous media, trade and government periodicals, and is the author of the non-fiction book, A Building Goes Up: The Making of a Skyscraper (1998). She lives in Ottawa.

When a partner understands

When a partner understands

When a partner understands the reasons why he is staying in a lovesick relationship, that's enough of reasons to stay and be happy. And re -strategize ways to make way for self happiness.