Dirty Rotten Vegan, II - A Culinary Revolution in the City of Angels 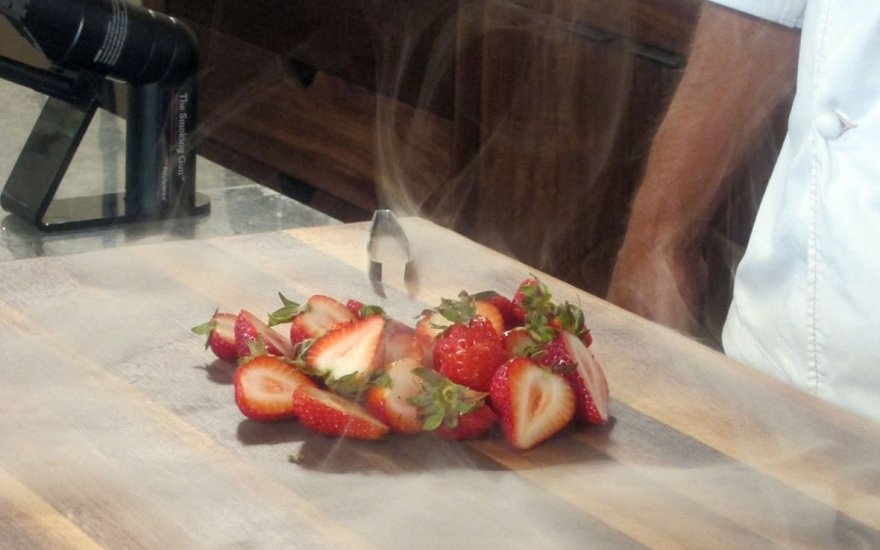 The era of commercialism in the 20th century begat a swell of product placements, the height of jingle writing, and the castration of the vegetable. Farm to table was replaced with produce being unsympathetically jammed into BPA-laden cans, suffocated in preserving syrups, and slopped onto dinner plates as sad, wilting side salads. Exiled to the role of garnish on a mushy, sorry casserole. It was a bleak time for vegetation. Meat consumption was king: self-respecting, red-blooded Americans ate red meat. They chowed down on burgers, hot dogs, and meatloaf. Celebratory meals called for steak and the odd surf 'n' turf. During the proceeding decades, the idea of flora as a main course barely transcended urban legend. Despite the odds, the seed was planted somewhere along the way, and the concept of a meatless lifestyle slowly made its way into the American psyche. Only within the last decade has the perception of vegan food begun to seriously burgeon beyond rabbit food and into the public palette.

Long hailed as a trendsetting capital of the world, Los Angeles has always been eager to adopt the latest and greatest. So, when vegan dining began to infiltrate the culinary scene, LA was at the forefront. The City of Angels took the fad under its wing, with a barrage of establishments that catered to die-hard vegans and the veg-curious alike. Even mainstream omnivorous restaurants began incorporating vegan-friendly options into their menus. The vegan populace rejoiced.

The stigmatization of veganism was dissipating and ingredient options evolving, but the traditional construct of the meal remained firmly rooted. No meal is complete without a hunk of meat - even when imitative - at its center. For the better part of the new millennium, those in search of animal-free fare were met with meat-knockoffs (read: the veggie burger) and a spattering of Asian fusion options. It was chik’n nuggets and tofu-rich Pad Thai as far as the eye could see along the streets of Los Angeles. A reimagining of the dinner plate seemed dubious. Yet again, the vegetable was the bridesmaid. Never the bride.

A new brazen breed of chefs are daring to do the unthinkable.

As with all timeworn practices, restlessness festered and revolution brewed. A new brazen breed of chefs have come out of the woodwork to challenge the convention of protein-centric meals. With their LA-based, cutting-edge restaurants, chefs Matthew Kenney and Tal Ronnen are two of the more audacious in this crew of culinary revolutionaries. They dare to do the unthinkable: leave the tempeh, seitan, and all other meat-substitutes on the sidelines and hail vegetation as the rock star of the plate. As if reinventing the wheel weren’t enough, they’ve elevated plant-based fare to fine dining.

Curiously tucked away in the (granted, surprisingly elegant) food court of a mall in Santa Monica, Chef Kenney’s refined canteen M.A.K.E. is decked out with sleek wood tables, a communal bar, and an outdoor patio that washes its customers in salty ocean air. Like the vicinity, the plates emanate sophisticated minimalism. The 'living' cuisine boasts inventive, vibrant presentations of raw, seasonal, local produce. Each dish is delicately arranged on large platters, forming dazzling, kaleidoscope patterns against the white porcelain.

And crucially, the flavors are just as bright and fresh as the color scheme. Amidst the spectacular wonderland of herbs, exotic fruits and pickled vegetables, there isn't a trace of mock animal protein to be found. As the seasons dictate a rapid turnover of options, poetic morsels grace the menu, such as kimchi dumplings with ginger foam and coriander. Oh, did I mention there is a communal bar? Stacked high with an impressive selection, there's no shortage of wine pairings for each main course. And don't skip out on the cocktails - their atypical mixology is an adventure worth embarking on.

Even something as seemingly elementary as a kale salad electrifies the taste buds.

Chef Ronnen is another pioneer in plant-based culinary wizardry. Unlike the airy quality of the items on M.A.K.E.'s menu, Ronnen's Crossroads Kitchen errs on the side of decadent. The lighting from the modern chandeliers in this West Hollywood hideaway is dim and sultry, complemented by the dark, plush upholstery of the wing-backed chairs. The dishes, all Mediterranean influenced, are equally as rich. The plates are small, so group dining and extensive ordering is advised. Crossroads has expertly risen above the limp Caesars of yesteryear and proven that the salad is a dish that can confidently stand on its own. Even something as seemingly elementary as a kale salad electrifies the taste buds with a balanced mixed of the popular leafy green, pine nuts, currants, and a lemon thyme vinaigrette. The menu also offers an array of flatbreads and hot dishes, all showcasing vegetables, nuts, and the freshest of seasonings. Veggies reign supreme on this menu; even the "crab cakes" and "oysters" consist of hearts of palm and artichokes.

One word of advice, forget that waistline and indulge in dessert. The plates are small, after all (though I recommend ordering more than just the one). For instance: a chocolate ganache tartlet with mascarpone (note: it's vegan) and spiced caramel popcorn. Need I say more? Hello, nurse.

The City of Los Angeles has done the restaurant world (and us beneficiaries) a solid by hosting Kenney and Ronnen's culinary prowess. Each chef has proven to be a noteworthy revolutionary in the fight against the classic dining schema. Their restaurants offer up a delicious revelry of seasonal and local produce. It may even be that these groundbreaking restaurants have taught us to respect the earth. Or perhaps they've taught us that plant-based dishes are best served with a chilled, herb-infused cocktail. Or, just possibly, we are rediscovering that vegetables can be freaking delicious.


Eva Bloomfield is a Los Angeles-based vegan lifestyle blogger with an (un)healthy appetite for all things vegan and cruelty-free - food, fashion, beauty, travel. She can be found tweeting about all of this and more at @dirtyrttnvegan
www.dirtyrottenvegan.com