Category
Design
Architecture & Planning
Movements & Communities
Ditchling Museum of Art + Craft
by Tom Jeffreys
Published: Sep 24, 2013
Standfirst
SUSSEX: After a major renovation, a museum reopens in a small country village in the south-east of England. What does it say about the relationship between art and community?
Body 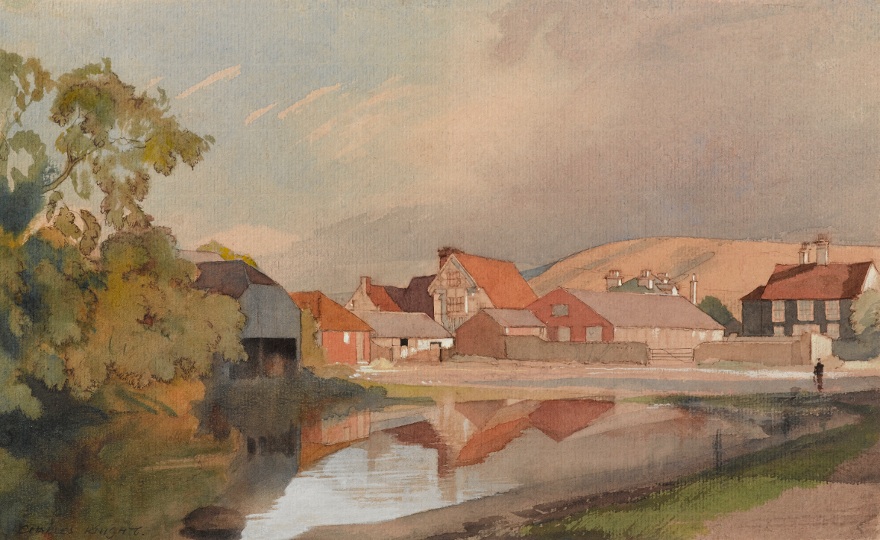 The landing of a new museum is oft-awash with the language of improvement (economic mostly, but also cultural, and always with smuggled-in connotations of the moral). The intention, one assumes, is to prevent the unsuspecting community amassing with pitchforks and indignation to fight off the rapid spread of the publicly funded Serota Tendency. Saint Nic himself was in attendance for yet another provincial opening last week– one that highlights the strange, uneasy relationship that always exists between 'art' and 'community' or even within any sense of community at all.

Before the arrival of the big wigs was a day-time press trip to Ditchling, a small Sussex village at the foot of the South Downs, whose museum has recently reopened after major refurbishment – largely funded by a Heritage Lottery Fund Grant of over £1.4 million. Now renamed The Ditchling Museum of Art + Craft, the museum has shifted away from its former role as a repository of general local history. Instead the focus is now placed firmly upon the The Guild of St Joseph and St Dominic, a community of artists and crafts people founded by Eric Gill in the early twentieth century, taking the ethos of William Morris – craftsmaship, community – bravely into the age of Modernism.

Gill is best known as the inventor of the Gill Sans font, and perhaps unsurprisingly the museum is now something of a haven to typography. Of particular interest is the role of Phil Baines, professor of Typography at Central Saint Martins, whose rebrand revolves around typographic arrangement rather than a logo as such. Two fonts are used throughout the museum itself – Gill Sans (“It would have been churlish not to,” admits Baines) and the warmer Aries – both of which were designed by Gill himself. Interestingly, in the case of Gill Sans, Baines brought back various original details that the font lost in the transition from metal plates to digital.

Adam Richards Architects have done a wonderful job throughout – clever and subtle and sensitive.

This semi-worship of the typographic finds its focal point in the presentation of the impressive St Dominic's Press, which the Guild used to print posters and books and leaflets to disseminate their ideologies. In the chapel-like Print Gallery stands the diverse paraphernalia of the trade – metal blocks, type cases (so that's where the terms upper and lower case come from) and of course, the press itself – No.50. “Stanhope invenit. Walker fecit.” reads the inscription. The press is placed rather deftly between two windows that, on the day we visit, wash sunlight across its old iron surfaces. Behind is a narrow floor-to-ceiling slot window that dates from the original building. It's not only a neat framing device, but in demonstrating sensitivity to place, past, and public, demonstrates the way in which a successful museum is more than simply the sum of its collection.

Elsewhere, the story of the Guild is told in fairly straightforward fashion. A large cabinet echoing the shape of the building sites the Guild within the community – books alongside shepherds' crooks – before we're introduced to some of the key figures through their works and their studio equipment (desks, tools etc) including several choice loans. Gill himself takes pride of place, but there's a small section each for stone-carver and sculptor Joseph Cribb (whose grandson is a trustee); artist David Jones; Philip Hagreen (whose brilliant cartoons championing the Distributist policy of individual land ownership strike an immediate chord today); artist Frank Brangwyn; Edward Johnston (who designed the font used on the London Underground); silversmith Dunstan Pruden; weaver Hilary Bourne; and Ethel Mairet (responsible for the much loved A Book on Vegetable Dyes).

Adam Richards Architects have done a wonderful job throughout – clever and subtle and sensitive, but also robust and surprisingly straightforward. Aside from the altar/press (which, like Baine's cruciform motif, draws on the Guild's strongly idiosyncratic Catholicism) the stand-out moment for me comes right at the beginning, at the very entrance to the museum. The architects have taken over a Grade II -listed eighteenth century cart lodge, unused for years, and converted it with both panache and practicality into a little shop-cum-cafe. Sitting on a simple wooden chair by Another Country and gazing up into the rafters, there's a tangible sense of light and space and the traces of the building's former uses: an old metal pulley wheel or black marks in the rafters from tarred twine. Each is marked by a numbered disc that corresponds to a hand-held key hanging by the door. It's a deft way to adjust the mindset of the visitor in preparation for the museum beyond. And there's a nice circularity in the fact that the key's handle has been made fro wood salvaged from right here in the cart lodge and reformed by a local wood-turner.

The Guild's work is etched into the fabric of this charming mish-mash of a village.

In this way, it also signifies the other way – opening the museum up to face the Ditchling community, a community within which the Guild of arriviste artists were a long-standing and occasionally controversial component. At the press view, Adam Richards declares how they sought to “use the whole of the village as a means of interpreting the collection”, which makes sense as the works in the collection constitute such a strong response to place and time and people. For, as much as its collection, the museum is about people and about community – and what a weird community they were, full of powerful friendships and loves, but also spats and dramatic departures. Encapsulating all of this is Gill – whose private life became public knowledge only in 1989 with the publication of Fiona MacCarthy's biography. MacCarthy drew upon Gill's own personal diaries and their detailed depictions of incest, infidelity, and even zoophilia.

Unsurprisingly, Ditchling Museum of Art + Craft steers clear of such subject matter, but the cracks in the close-knit community are nonetheless in evidence. When the Museum tells us that the Guild disbanded in 1989 “due to issues of shared ownership”, it's not hard to imagine strong disagreements among such a colourful crowd. Gill of course had long gone by then, and had actually disowned the very community that he had founded. In a letter on display, Gill distances himself in the strongest terms from the “horrid army of artists and crafts people to arrive and corrupt that ancient village”. What the current Ditchling community make of the museum – and its £7.50 entrance fee – remains to be seen. But it's potentially worthy of note that, on the day I visit, every single person leaving the train at Hassocks, the nearest station to Ditchling, is on the same press trip: yet another horrid army, although this time only here for the briefest of skirmishes.

But the Guild's work is etched into the fabric of this charming mish-mash of a village – literally, in the case of Gill's minimalist war memorial. In the graveyard of the 12th century church is Johnston's grave, gently dusted with lichen icing. Inside the church, an oak screen carved by Joseph Cribb in memory of Louis Ginnett. Across the road, the ramshackle Tudor splendour of Wings Place; the Browne family's private burial ground up in The Twitten (local dialect for a narrow passage), and the Old Meeting House, formerly the Unitarian Chapel. In the centre, Pruden Smith jewellers, run by the grandson of Dunstan Pruden. Their tagline: “A Precious Legacy”.

On Church Lane, inside a perspex-fronted noticeboard, more evidence of an active community. From the parish notices, the Clerk's Report damns Sign 501 at East End Lane: “The sign outside the limes was replaced in June and I was incensed that it was much higher than the original.” The closer-knit the community, it seems, the more public its petty divisions. Nearby, a grey squirrel jinks along a slow flint wall, a bushel of leaves within its jaw, making a new home perhaps, somewhere a little out of view.