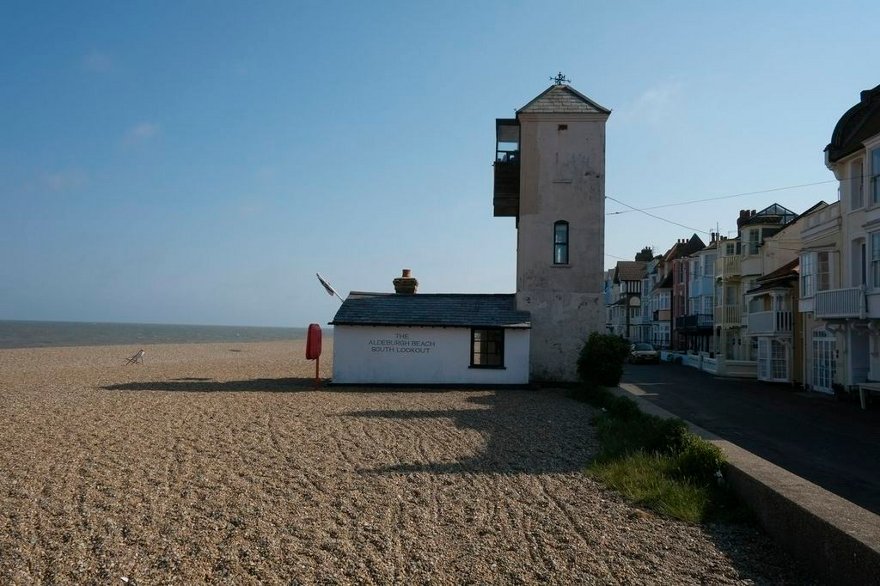 A blustery day on the beach, and I'm ascending the narrow spiral staircase to the South Lookout, a tower that rises from the shingle beach at Aldeburgh and looks across the dove grey North Sea. Here, artist Emily Richardson has created a sound installation in this eyrie, where the wind whistles through the window frames and creates a comforting cocoon in which the external becomes internal. The brash grate of gulls and the crashing waves are all heard inside the whitewashed wood room, two notes lilting through the layers of sound. The sense of being both inside and outside at once is curiously soothing and unsettling simultaneously.

Conceived by artists Abigail Lane, SNAP runs alongside the more famous Aldeburgh music festival at Snape Maltings in Suffolk. It was established in 2011 and has been growing each year with a superb mix of artists who share ties to Suffolk. This year, SNAP is themed around the centenary of Benjamin Britten, who founded the Aldeburgh festival back in 1948, and the art on show responds to Britten's life and works in a broad variety of different ways.

Richardson, for example, told me that it was her research into the architecture of HT Cadbury-Brown that formed the link to Britten's work. Cadbury-Brown had proposed a memorial to Britten to stand at Aldeburgh beach. It was to be a vast baulk of timber that, when faced with particularly violent weather, would chime the two notes associated with the chorus of Peter Grimes, one of Britten's most celebrated operas. In order to test the possibility of such a structure, Cadbury-Brown strapped two organ pipes to the top of a car and drove up and down the Aldeburgh-Thorpeness road to ascertain what speed the air would have to reach to sound the notes. Whilst the memorial itself never came to pass, it is these two notes that are woven into the installation in the South Lookout – a fine nod to Britten's preference for art and music as participatory events.

Benedict Drew believes music may be magic, and I'm inclined to agree.

Benedict Drew's film Matériel [pictured below] draws even more unexpected connections to Britten. The film is an homage to musique concrète 's Pierre Henry and the inclusion of this avant-garde form of music in the 1954 Aldeburgh festival. Drew heard Henry talk in the '90s where he mentioned that Britten had been the last person to invite him to speak in the UK, and that had been back in the 1950s. Drew lets me in on a secret – that he believes music may be magic, and I'm inclined to agree... His stunning film is an aurally and synaesthetically complex exploration of the idea of objects shifting from the passive to the active as they become instruments. The discord is unsettling and densely textured. 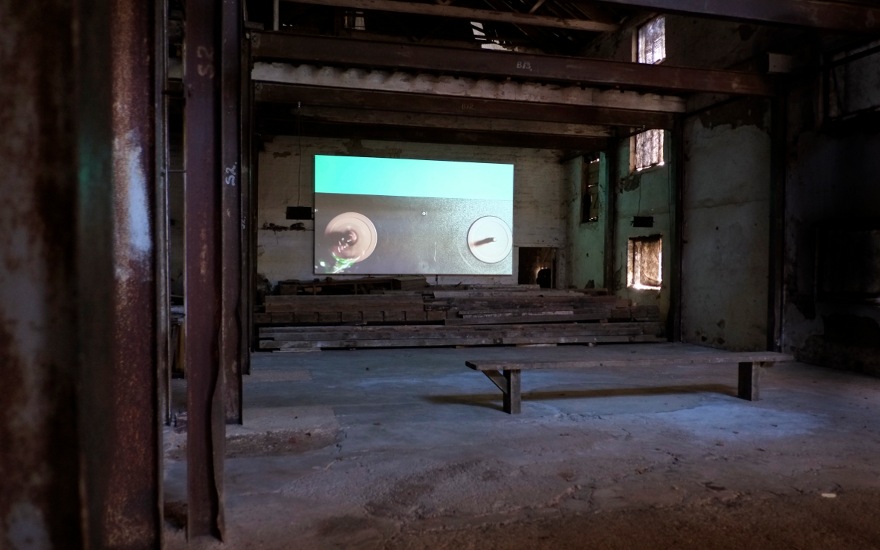 Sarah Lucas' vast white phalluses Eros and Priapos occupy the derelict maltings building, surrounded by timber, old bathtubs and towering hods laden with bricks. It's imposing and obscene, and I don't think  one person enters the courtyard without a smile flickering across their face. To the many children there, the phalluses are just another object to climb on, much to the amusement of all of the grown-ups. I certainly struggle to keep a straight face when an elderly gentleman says that the work “really slaps you in the face”. It will be interesting to see how it interact in different environs – I feel that the rather sterile whitewashed walls of a gallery may diminish their impact. Accompanying Lucas' sculptures is Julian Simmons’ dark and abstract work NUMBERSTREAM 100  which reverberates around the space, omnipresent and powerful. The sound purples and shimmers like a darkening bruise, deliciously discordant and completely immersive.

Meanwhile, a much more intimate engagement is demanded by Maggi Hambling’s War Requiem, which occupies the stunning Dovecote Studio. The walls of the studio are covered with oil canvasses depicting the horror and desolation of war. Using a palette of dark greys shot through with mustard yellows, the paintings are distorted faces of lives lost, identities eradicated – and accompanied by Britten’s War Requiem which is played continually. With visitors only allowed in one at a time, it's an extraordinary experience to sit alone in this vaulted space and reflect on both the horror and honour of war.

All of the work is intricately bound together, both through Britten’s music and the binding ties with Suffolk.

All of the work exhibited seem intricately bound together, both through the shared links of Britten’s music and the binding ties with Suffolk. Britten's raw earthiness and interest in found objects as percussion are beautifully reflected, and the curation manages to interweave the composer’s sense of narrative with a contemporary thread to create a powerful, coherent body of work. It's actually quite hard to articulate how much this festival has occupied my thoughts throughout the week since I visited. I probably haven't been to an event before that has shone such a strong light on the relationship between art and music, or perhaps not one that has affected me so profoundly – it's very complex, and very exciting.