Category
Walking
Architecture & Planning
Wildlife & Wilderness
At the Ferryman's Cottage
by Tom Jeffreys
Published: Aug 01, 2013
Standfirst
KINTYRE: Exploring the flora and fauna of the west coast of Scotland, from a 1930s cottage, owned and let out by The Landmark Trust.
Body 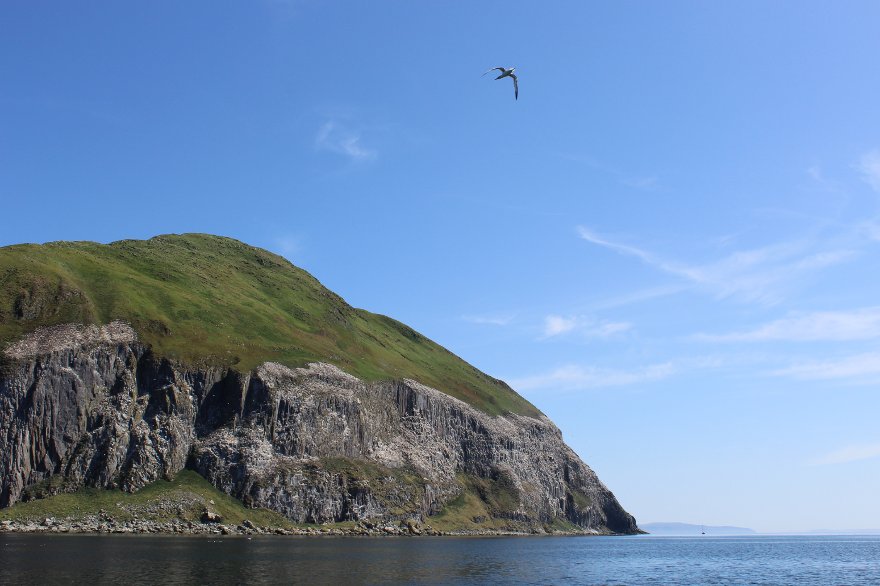 Gliding thinly over wet glass, hardly grazing the pristine polished surface – rushing through still winds towards Ailsa Craig, rapidly rising in the distance. Perched aboard this ex-military boat heading out from Campbeltown with the entertaining and knowledgeable Mike of Mull of Kintyre tours is a strangely serene experience, with the sea this glassily calm. The island itself, ten miles off the west coast of mainland Scotland, was once home to pirates, then a haven to Catholics in the 16th century, and now, following the eradication of the island's imported rat population, it's a bird sanctuary of some significance. Owned by the 8th Marquess of Ailsa, and leased to the RSPB until 2050, the island has actually been up for sale for some time – and is currently available for just £1.5million...

As our boat slows, a line of white is etched out aft for a frothing moment, then gently wiped away. Afore, columns of birds clamour and rise and swoop. Manx Shearwaters skim the flat sea's surface; cormorants dry themselves on the low rocks; guillemots hurl themselves through the air in endearingly ungainly fashion; and softly yellow-headed gannets (36,000 pairs of them) squabble and squawk and circle. In the water, a pair of seals lounge apart like big wet dogs; and a trio of porpoises arch across our eyeline. Tiny clown-beaked puffins launch darting raid missions – spokes emitted from the island centre and out into the Firth of Clyde. One skitters low across the boat, its beak crammed with fish, like the silver-tipped moustache of a retired and red-faced colonel. 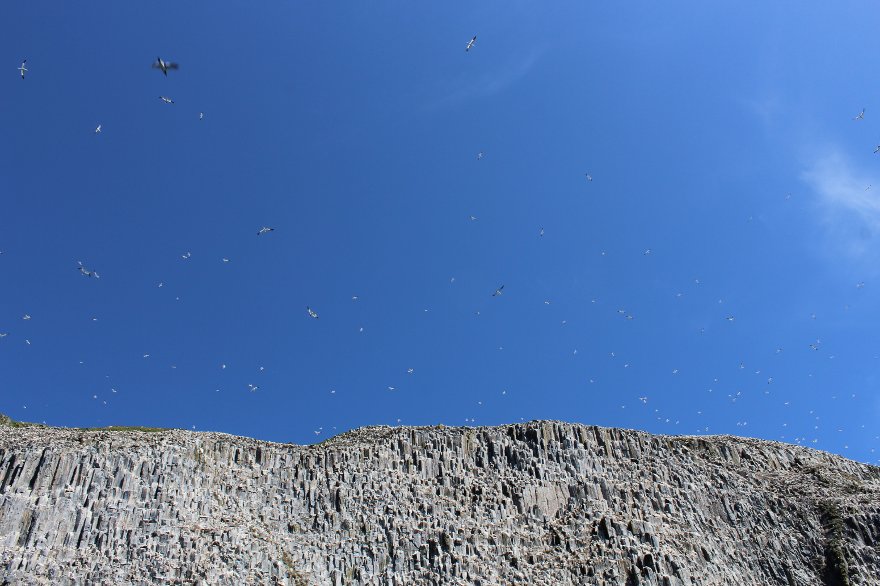 Ailsa Craig may be one of the most famous bird sanctuaries in the United Kingdom, but throughout our time on Kintyre, the diversity of the birdlife is astonishing. We're staying in The Ferryman's Cottage, a Landmark Trust property right on the shore at Saddell on the east coast of the peninsula. All around are wagtails and skylarks; swallows and house martins darting round the house; ringed plover standing solitary and serene. Every day brings new treats: rock pipits zipping amongst the boulders; sandpipers trotting along the shingle; oyster catchers shouting out their territories, red-beaked and plumply comic. Each day, too, the daily heron: “first the shadow, then the bird”.

This really is one of the most beautiful places you could
imagine.

Most exciting perhaps is the resident otter. He's a regular fixture in the cottage's visitors book, described by sundry previous occupants cavorting on the rocks, playing the fool, or simply lazing in the sun. Hollowed-out sea-urchins lying on the shore are a tell-tale sign, and we spot the little fellow himself on most days of our stay – lolling about in the sheltered cove.

In the bright summer sun, this really is one of the most beautiful places you could imagine. Water clear and cold as crystal, framed by a gently curving arc of scrabbly shore. Pebbles and lichen-spattered rocks give way to grass and ancient woodland, a neatly mown lawn, and brightly flowering hedgerow. The cottage itself is a solid, white-painted little house, built around 1930, and was once home, as the name suggests, to the local ferryman, whose job it was to offload provisions from the coastal steamers. But this was some 30 years after nearby Campbeltown peaked as the wealthiest town in the country, its fortunes built on whisky and shipping. Then the war came.

Nearby, along the lane, stand the Victorian-era Shore Cottage and the 16th century tower house of Saddell Castle. Completed around 1512 by David Hamilton, Bishop of Argyll, this is the origin of the estate. Sacked by the Earl of Sussex , left in ruins for a hundred years, then renovated by various earls, it's a strange sight. And although Antony Gormley once threw a party here, it's easy to see why Colonel Donald Campbell gave up on the castle and built instead the grandly Classical Saddell House just down the road.

Rescued buildings do not become museums, to be peered at over a rope.

All of these properties are now owned by the Landmark Trust, purchased from their previous owners, Colonel and Mrs Moreton, in 1975. They've since been renovated and given a new lease of life as holiday lets. This is largely the pattern adopted by the Trust, which was founded in 1965 by banker and Conservative politician Sir John Smith and his wife, Lady Smith. The purpose of the trust is to rescue historic buildings of historic or architectural interest that would otherwise fall into disrepair, renovate them to exacting standards using local crafts people, equip them with all mod cons (power showers, branded soap, Le Creuset pots) and then rent them out. The idea is that the rescued buildings “do not become museums, to be peered at over a rope” but living places, to be inhabited and enjoyed.

Today, under new director Dr Anna Keay, formerly of English Heritage, the trust has some 190 properties, primarily in England, Scotland and Wales, but also in France, Italy and the United States. These range from a Lundy Island lighthouse to a converted train station in Staffordhire, an ornate Lincolnshire water tower to a Huguenot house in Spitalfields, and cottages and a carpenter's shop in Cornwall. 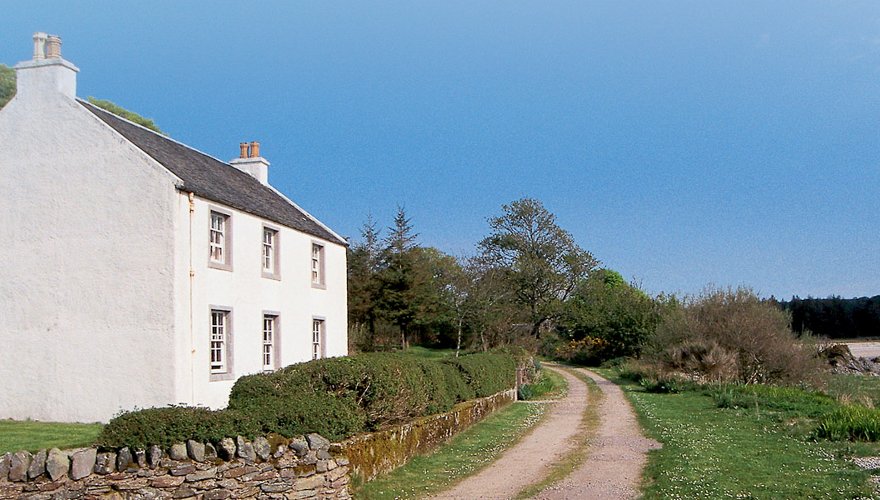 It may sound trite, but each of these varied venues comes with an acute sense of its own place – within the environment and within history. Meticulously researched folders introduce visitors to the unique histories of each property, whilst small libraries are packed with place-relevant books and leaflets. Our shelves are laden with such gems as the Field Guide to the Birds of Britain, Tarka the Otter, George Hendry's surprisingly fascinating Midges of Scotland, and Eddie Macguire's Birds of Machrihanish. Eddie is the Warden at the Machrihanish Seabird and Wildlife Observatory – a short drive away, and an amazing place to see rare visitors such as Sabine's Gull through high-powered telescopes and binoculars. Eddie is a fascinating man, and the observatory is a wonderful place. The sight of sundry gannets repeatedly plummeting into the ocean is one that will stay with me for some time.

It is at the edges that something approaching the 'natural' can begin to thrive.

There's a strange contrast between the management of the property, with its sensitive attunement to place, and the management of much of the woodland of Kintyre. Immediately adjacent to the cottage is ancient, mixed woodland, one of the key reasons for the peninsula's diverse range of birdlife. But up in the hills inland it's a different story, and what look like beautiful woods on my OS Explorer Map are in fact scrupulously managed plantations – row upon row of pine trees, planted so close together as to block out the light, making it all but impossible for anything to grow within their murky midst. The result of Forestry Commission Scotland's policy of afforestation is a monoculture that dominates the landscape. According to a case study on forestry.gov.uk, the “manager’s objective is to maximise returns by producing large volumes of sawtimber for the market”. And so, periodic patches are felled, leaving vast swathes of broken stumps and scarring across the landscape.

It is at the edges of these intensive timber-production areas that nature – or something approaching the 'natural' – can actually begin to thrive. Ferns and foxgloves encircle each commercial plantation, and my hot walk through the woods is punctuated by yellow flag iris – like elegantly rotting daffodils – beautiful heath-spotted orchids, and bird's-foot trefoil. It's also here that I'm mobbed and pursued by a gang of hungry horse flies. Less nice.

Returning, tired, to the Ferryman's Cottage, every evening is quiet and perfect: lazing side by side in striped deckchairs on the shingle, as the midges begin to circle. The dusk descends lightly, and the water strokes the sand, as it did for the ferryman and the bishop, and now for the otter, and for us.