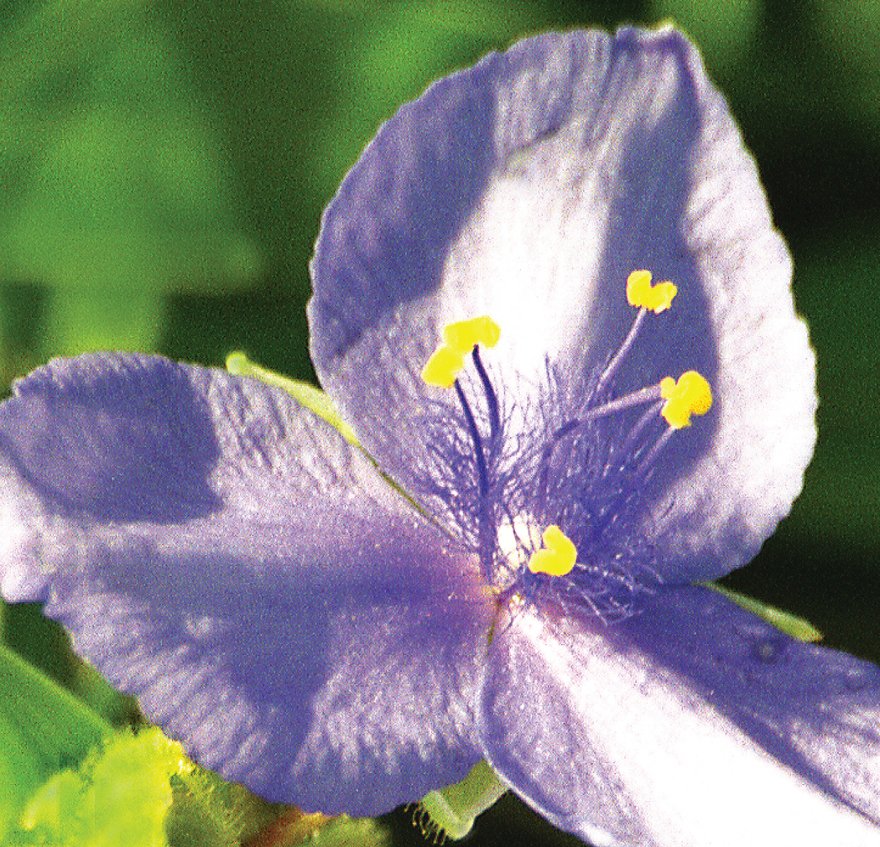 For Quick Recognition. Spiderwort flowers group where leaves attach to the stem. They consist of three greenish sepals and three petals that are usually blue but may also be pink, purple, and rarely, white. Six stamens, yellow-tipped in the photograph and hairy, surround a spindly pistil. Linear leaves, essentially parallel-sided, appear folded lengthwise.

Where and When Found. You find spiderwort in woods as well as in such open sites as grasslands, roadsides, and railroad embankments. It lives in southern Canada and in all the lower 48 states except Washington, Oregon, Idaho, and Nevada. Spiderwort blossoms from April to September.

Of Note. Spiderwort is also known as wandering Jew. “Spider” refers to the spidery leaves and “wort” is from the Old English wyrt meaning plant or root.

Tradescantia (trad-uh-SCANT-shuh) is named for John Tradescant, who lived during the 1600s and was the father of a father-son team of gardeners for Charles the First of England.

Alan M. Cvancara has nurtured a passion for wildflowers for more than 40 years. Cvancara is a retired geology professor and the author of 11 nature books: Edible Wild Plants and Herbs, A Field Manual for the Amateur Geologist, Sleuthing Fossils, Bare Bones Geology, Designs of Nature, Canoe Tripping and Life, Exploring Nature in Winter, Sleuthing Fossils, At the Water´s Edge and Showy Wildflowers of Casper and Muddy Mountains, Wyoming. He and his wife have co-authored Windows Into Legacy, a poetry-photography book. Cvancara is also an artistic photographer.

Wildflower Personalities I - Spiderwort
Yellow Pond Lily, Do you open for thee?
Faces of the Wild: Ball Cactus
Wild Culture Bedside Table - May 2013
Soil - an interview with Tim Cresswell