How to Craft a House Spirit

Category
Art & Aesthetics
Religion, Mysticism & Ritual
Finding & Foraging
How to Craft a House Spirit
by Daniel Seferian Spies
Published: Apr 01, 2018
Standfirst
We chanced upon a Danish conceptual artist in an ecovillage in Mexico, working on a wooden sculpture. With materials from a recently demolished house, he crafted a 'protective house spirit' to guard the new house to come — what he calls Hue-Hue Duende (an old, old elf) — and shares his experience of its creation.
Body

To destroy a house is always a dramatic event.

The steam had hardly escaped the sweat-lodge and seeped through the roof of my friend Oliver’s house before the demolition began. The screeches and roars that are heard once pillars succumb and walls give in is chilling. Dust fills one’s nostrils with the bouquet of remembrance; an arid taste of desiccated time stings the tongue. This is a true drama all right, yet even more so if the house has been a home — as was the case with this one. 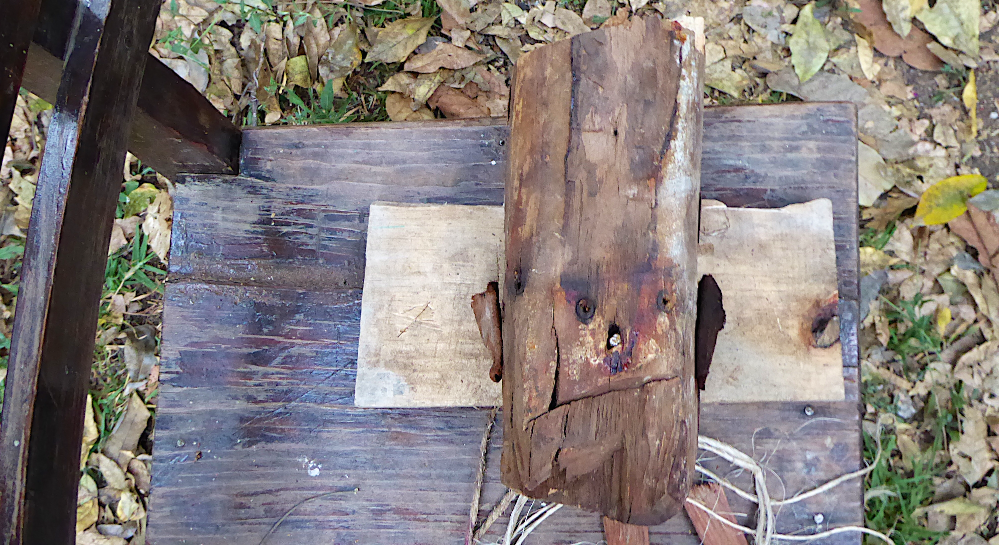 Much can be said about the emotional and psychological impact of such a happening. All of which may be very well summarized by a few lines by Gaston Bachelard

That house is remote, is lost, we no longer live in it, we are only too sure that we will never live in in it again. And so it is more than a memory, it is a house of dreams, our oneiric house. 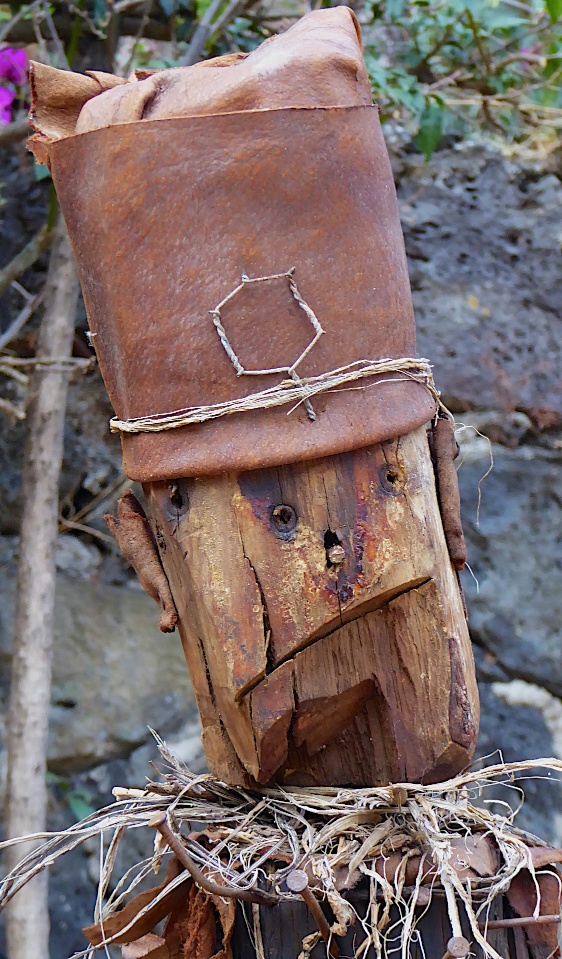 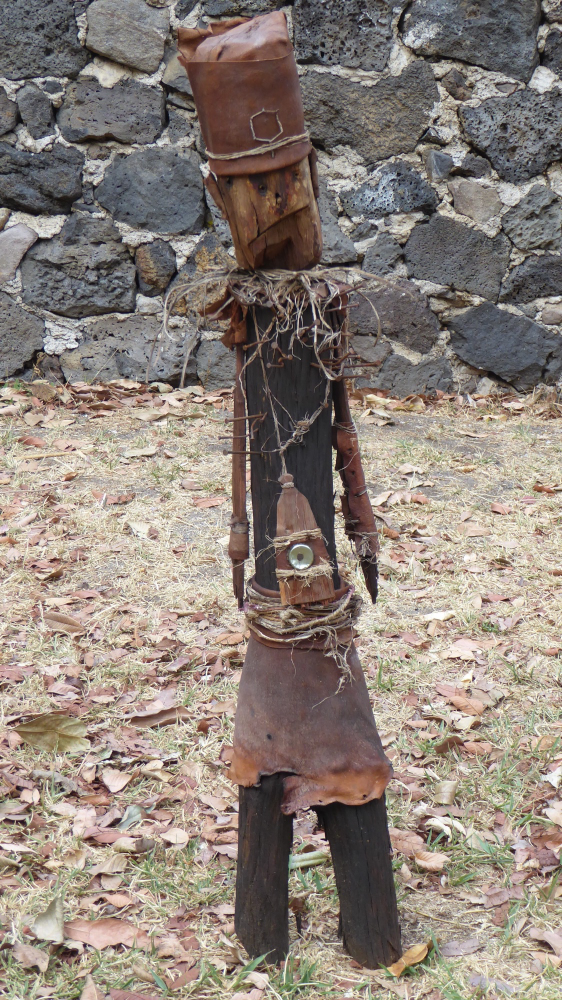 Now, due to the skills and effort of the demolition workers, the site had been cleared and the foundation for a new house dug in. In the process I managed to collect a few materials from Oliver’s house. As an artist I have always had a weakness for leftovers, and a passion for residue and debris; I find it is often here upon which the best stories rely. Like the French say, one can only really tell how a dinner has played out by looking at what is left on the table. 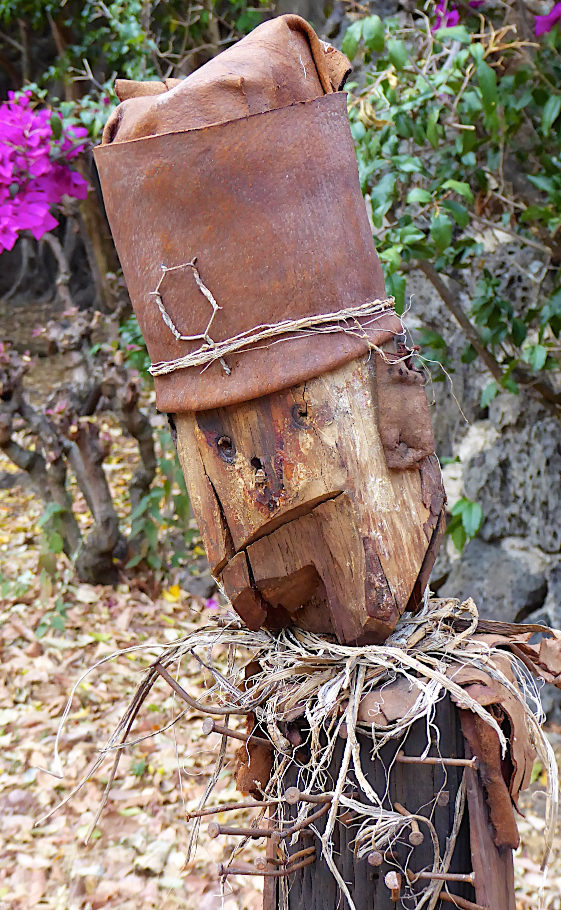 I had lived in Oliver’s house on two occasions during the first two decades of my life, and in there I had tasted my first papaya and seen my first scorpion. Whether due to these personal ties, or because of the inexplicable effect these particular Mexican mountains have on many of us who have spent time here, I was in no doubt about the purpose: a dueño de casa, or ‘house spirit’, had to be built. Yet, to use the word ‘build’ in this case is quite improper. More accurately, it is a matter of reassemblage. 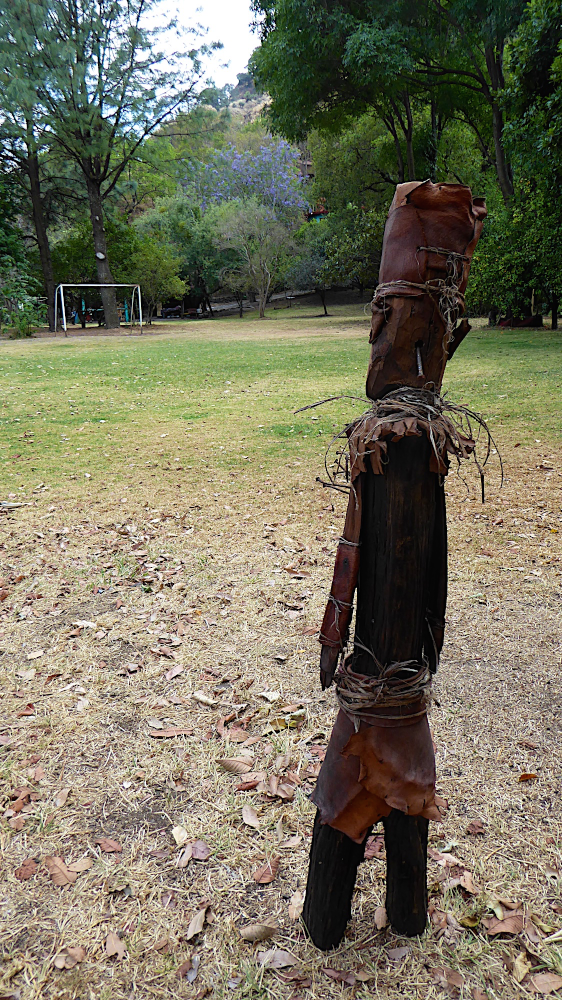 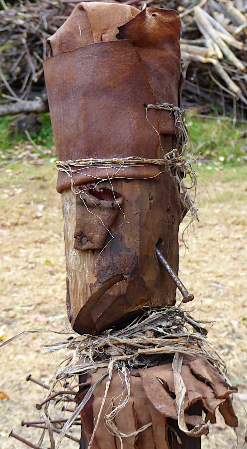 The first step in my process of crafting the dueño was to collect components from Oliver’s demolished house — a simple process of putting the pieces back together: the beam of its melancholy face, planted onto the trunk, posted in a proud and upright position (inherent to a house), feet solidly planted on the ground. And finally, its soul tied and nailed back into place. 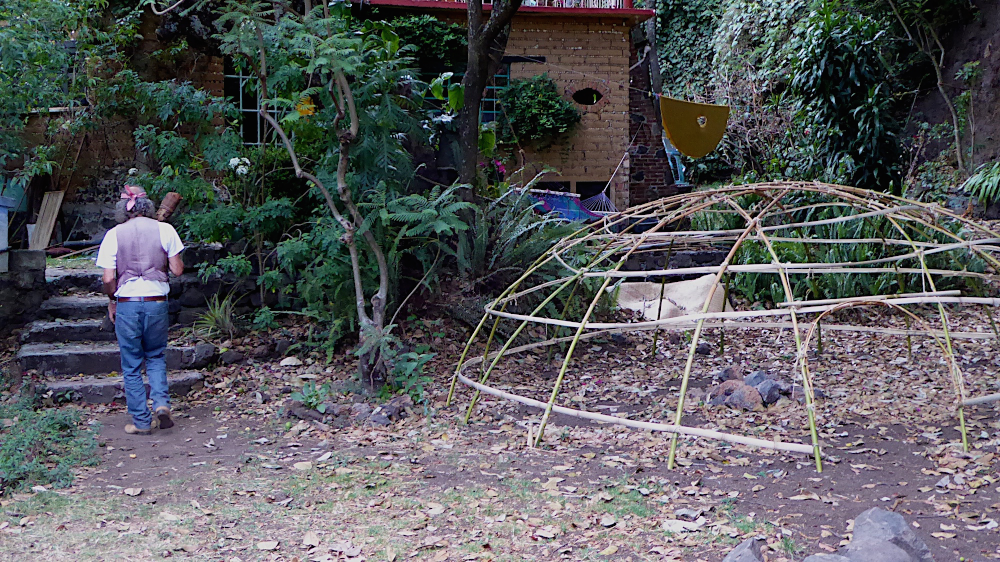 It is an instinctive procedure, well known in every part of the world, an essence calling upon its own figurative becoming. We might think of a Kongos’ Nkondis – the fetish – or a theatrical puppet waiting to act. Indeed, it may allude to a million other creations of the kind, those who mark a transition and provide protection, keeping a history intact. 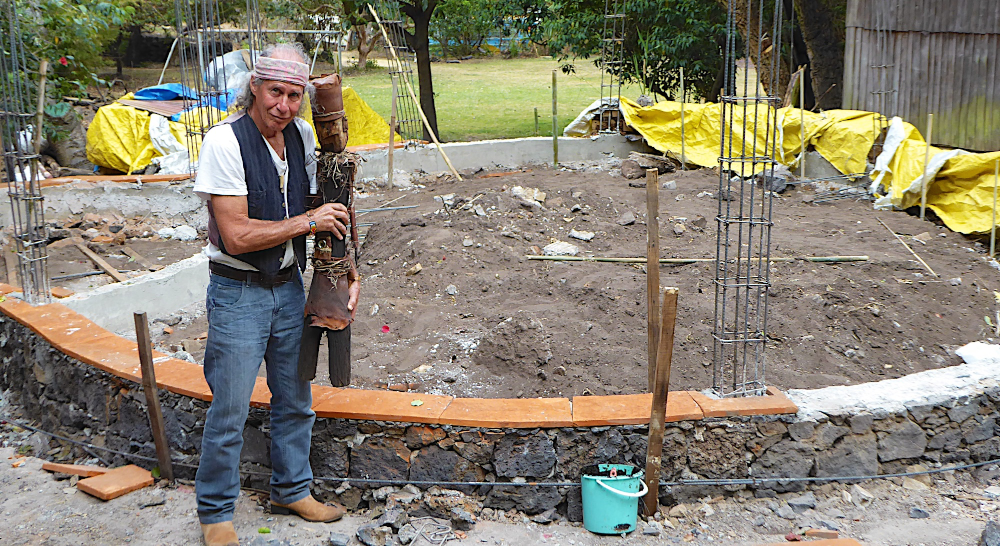 Homeowner Andres King Cobos with Hue-hue Duende at the site of the new house. 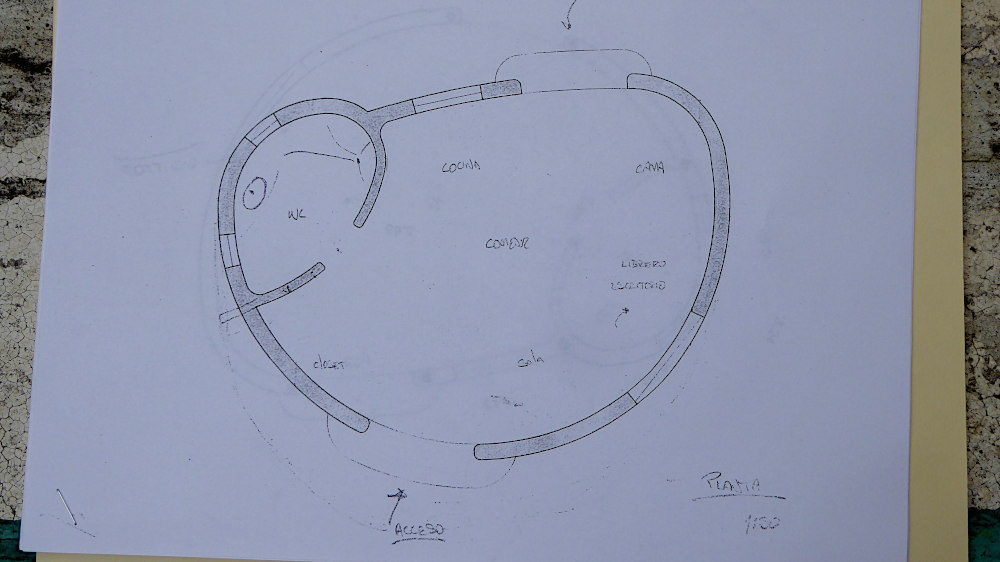 Plans for the house where Hue-Hue Duende will live — by local architect and Huehuecoyotl community member, Michel Lewis.

This article first appeared in The Journal of Wild Culture on April 1, 2017.

DANIEL SEFERIAN SPIES is a conceptual artist based in Copenhagen, Denmark, and a graduate of the Malmö Art Academy. Storytelling is a central part of his work, which primarily consists of art installations that apply a wide array of materials and media. 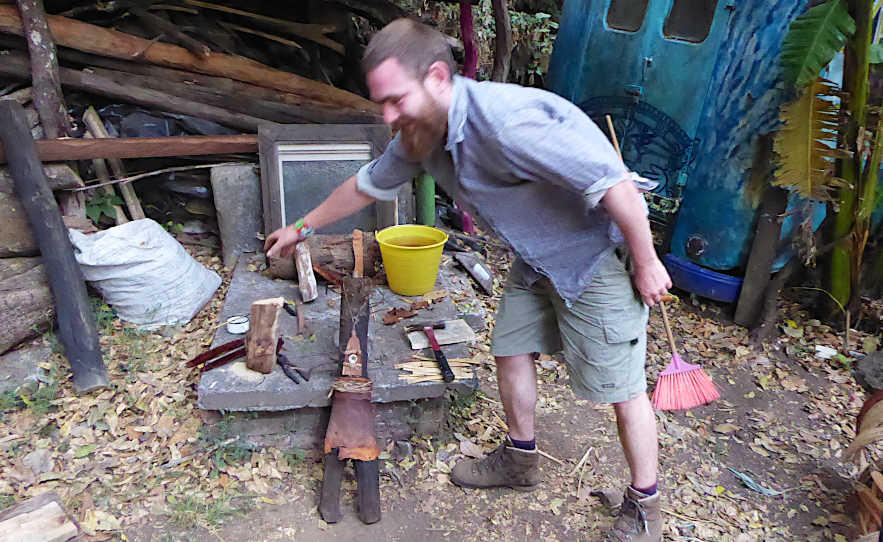 The author and Hue-hue Duende in the outdoor workshop, a few feet from the building site . . . memory reassembled from detritus.

A very poetic and deep rooted

A very poetic and deep rooted

How to Craft a House Spirit
Roxanna Bikadoroff: The Spirit of Art Through the Female Lens
Curious at West Norwood Cemetery
At Subtle Technologies 20: Lifelong Learning & Resisting Colonialization
Botticelli Reimagined: The Adventure of Venus on Earth

At Subtle Technologies 20: Lifelong Learning & Resisting Colonialization
Curious at West Norwood Cemetery
Botticelli Reimagined: The Adventure of Venus on Earth
The Way of the Collagist
Roxanna Bikadoroff: The Spirit of Art Through the Female Lens