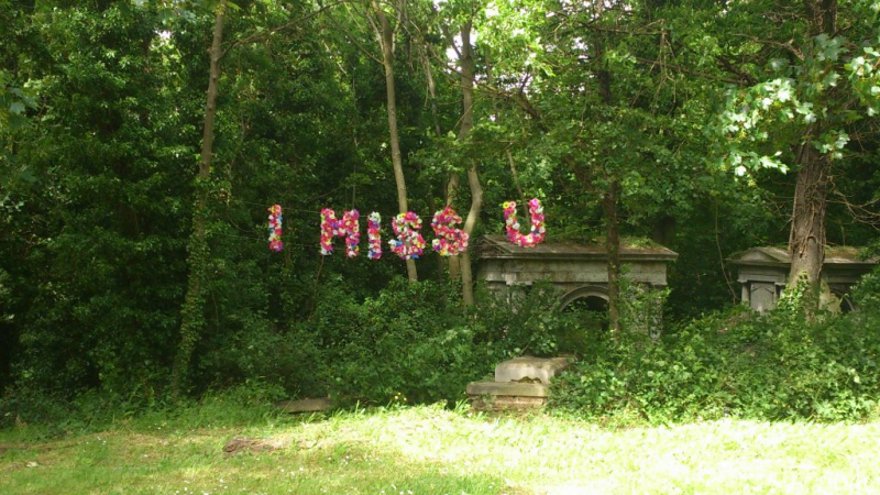 Throughout history, different cultures have explored many ways of dealing with death and mourning. Cemeteries have traditionally been used to mourn and commemorate the dead, but, as cremation becomes more popular, perhaps cemeteries are becoming places less for active mourning than a kind of archiving of history?

Curious, an art trail that took place at West Norwood Cemetery this June and July consisted of 21 installations on site. Designed to alter our perceptions of visiting cemeteries, the project also offered a unique insight into the history of London.

During an afternoon of feasting and performance entitled The Grand Picnic For The Common Dead, medical historian Ruth Richardson shared her research about the cemetery's Enon Chapel, which was once located on St Clement's Lane, near the Strand. In 19th century London, she explained, mortality rates amongst the poor were high, and burials were costly due to the crowded nature of the city. Cheaper cemeteries were available outside of London, but transportation of bodies was complicated and expensive.

The Enon Chapel was owned by a corrupt Baptist minister who offered burials more suited to the budget of common people, at 15 shillings each. Between 1823 and 1842, 12,000 people were recorded to have been buried in the small basement, and corpses are said to have been dismembered to fit in to the compact space.

After this scandalous revelation, a well-known surgeon arranged for the bodies to be relocated and buried in West Norwood Cemetery. In 1852, The Burial Act was then passed as part of the Burial Reform, in which burial grounds were closed within central London and larger cemeteries were established in the surrounding countryside. Leading on from this, the act of cremation became more popular and The Necropolis Railway was built to transport bodies from Waterloo to Brookwood Cemetery in Surrey.

Taking place within the Common Burial Area at West Norwood Cemetery, The Grand Picnic was conceived as a final tribute to those mistreated corpses. A procession complete with floral wreath was taken down to the Enon Chapel plot as a gesture to all those people who did not receive what was then, as now, understood as a proper burial.

The danger with any event like The Grand Picnic is in the construction of a 'mere' spectacle.

The danger with any event like The Grand Picnic, and Curious more generally, is in the construction of a 'mere' spectacle – here death in art seen as some morbid and perverse fetishisation. However, Jane Millar took great care to curate the project with sensitivity, giving the tone an overall human feel. Many works focused on how individuals choose to commemorate their lost relationships. Artist Lucy Spanyol, for example, created a faux-wreath installation entitled I MISS U made from plastic flowers and personal objects, a piece inspired by the objects that people choose to leave around the gravesides in West Norwood.

As an artist and curator, Millar was particularly interested in how each individual artist responded to the site. Millar said:

"Curious is about opening up both the cemetery and contemporary art to an intergenerational audience. But it's also about the way creative practice-as-research works with both tangible content of a place and also uncovers, explores and brings to light its hidden content."

In keeping with this theme of investigation and discovery, Jane Wildgoose, of The Wildgoose Memorial Library in North London, cements this idea of the cemetery as an archive in her installation A Question of Archival Authority.

Wildgoose has carefully selected objects taken from her own collection, arranging them in the Maddick Mausoleum specifically chosen for the artist by Millar.

The cemetery is not just a dwelling places for sadness, but a repository of information and guidance.

At the centre of the installation lies an Immortelle wreath, where visitors are invited to reflect on the passing of loved ones and to state their site of burial, inscribing a specially printed copy of an authentic card taken from Wildgoose’s mourning stationery archive within the Memorial Library. This action not only inspires us to commemorate our lost relationships, but encourages us to consider memorial where burial is not possible, and especially to think about the significance that may be attached to linking the location of human remains (whether in the form of interment or the scattering of ashes) with specific, and often carefully chosen, places.

Wildgoose was inspired by Ken Worpole’s Last Landscapes: The Architecture of the Cemetery in the West, which suggests that cemeteries are “quiet, catalogued and annotated” places. Like libraries, cemeteries contain a wealth of informational documents and historical artefacts, which span centuries. This installation also inspires us to think about the relationship between art, archive and legacy.

Conversely, Carys Davies’ installation Still Falls The Rain focuses on the absence of information, after the artist found the remains of two sisters recorded in the ledgers in the Cemetery Office. The sisters, Sophi and Christine Zinopoulos of New Eltham, died four months apart between the years of 1941 and 1942 and were given no monument to mark their presence on site.

For this piece, Davies, primarily a ceramic artist, has created two urns as an alternative memorial to the sisters. The artists says “With our own dead, we invent stories and souvenirs to remember them by”, as we realise that time and moments with our loved ones can never be relived in the present. Otherwise, the dead reside only in our memory – optically enhanced and neurologically manufactured, and therefore faulted. With this in mind, how much of our memory is built from imagination?

As the Vanitas tradition illustrates, thinking about death encourages us to reconsider our priorities in life. A common symptom of loss is to feel a sense of meaningless outside of love. As one graveside at West Norwwod read: “Only love makes us irreplaceable.” In this light, death might be seen as something of a catalyst for reinvention. Curious did exactly this – confronting the sometimes disturbing concept of death in a practical and positive manner. The cemetery, it suggested, is not just a dwelling places for sadness, but instead a repository of information and philosophical guidance from those who have already experienced full lives. The Grand Picnic itself, situated in the beautifully green burial plot for the Common Dead, was filled with music, dancing, togetherness and food: combining for a full celebration of life in the present tense.


Melanie K is a London-based artist and writer. She completed her BA in Fine Art at Leeds in 2011 before undertaking an MA in Art and Science at Central Saint Martins, which she completed in 2013. Her work frequently engages with art history and cutting edge contemporary science to explore themes of transcience and temporality. Melanie is also the Founder of the London Alternative Photography Collective and Co-Founder / Curator of Space is Ace.
www.melaniek.co.uk


Image credit: Lucy Spanyol, I Miss U. From Curious 2013.
www.westnorwoodcemetery.com