How to Lay a Hedge

Category
Design
Gardenalia
Soil & Terrain
How to Lay a Hedge
by Mandy Goddard
Published: Jan 27, 2022
Standfirst
“Your hedges are very bad for tourism," she said. " ‘ow can we see the view?” She was right, and the author, unaware of what was ahead of her, found herself inside a thousand years of rural craft and continuity.
Body 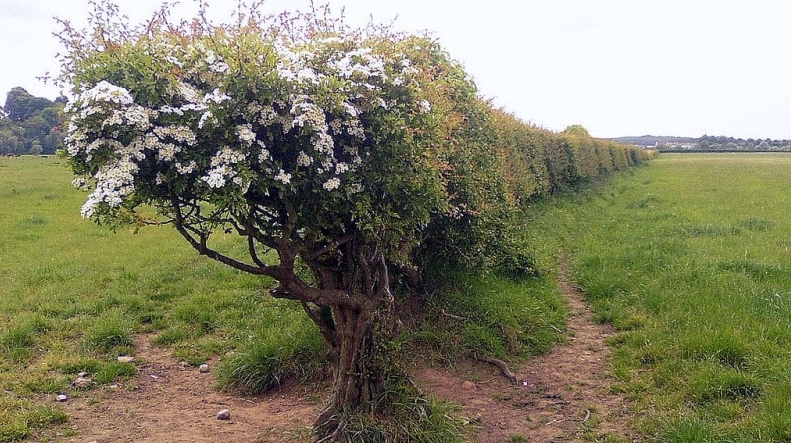 I have a small log on my bookshelf I have kept for nearly ten years. It is a section of ash about ten inches long and four inches in diameter, with bark changing from the smooth grey of a young ash to the fissured grey-brown of an older tree. I keep it is because at each cut end the growth-rings are very clear. It reminds me of those huge stumps of felled trees you sometimes see in old parks — with carefully labelled rings with dates of key historical events to show what the tree has ‘seen’ in its long life.

My ash log is a baby in comparison, only seeing eleven years of growth. It was born just before 9/11 and lived through much of the Blair government and the financial crash of 2008. I like it especially because it’s a record of my first eleven years living and working on a small piece of land in Somerset.

While some were deliberately planted, it is thought that others are remnants of ancient woodland that were left in place when the woods were cleared for agriculture. “The ‘ghosts’ of woods,” Rackham calls them.

The log was cut from a hedge that I planted with some friends on a crisp winter day at the end of 2001. Together we made four hundred slots in the ground along the fence line, dropping a small vulnerable tree into each slot, pressing them down with our heels. Blackthorn, hawthorn, dogwood, hornbeam, guelder rose, dog rose, elder, and a few ash. By the end of the day it looked less like a hedge than a double row of spindly twigs sticking out of the ground. Looking back at our handiwork in the failing light I could hardly see them. You need faith to plant a hedge.

I found a few snapshots of that day just recently, lurking in the bottom of my box of unsorted photos, the colours as washed out as my memory of it. I can still name the people in them, although, I realise, sadly, there’s only one or two I still keep in touch with.

This part of South West England is rich in hedges, many of them extremely old. Landscape historian Oliver Rackham calls these hedged areas Ancient Countryside,’ contrasting it to the Planned Countryside of much of the country. Ancient Countryside, Rackham says, “is the product of at least a thousand years of continuity,” where some field boundaries date back to pre-Roman times. It explains why fields here are generally small and irregular, the hedgerows sinuous. While some were deliberately planted, it is thought that others are remnants of ancient woodland that were left in place when the woods were cleared for agriculture. “The ‘ghosts’ of woods,” Rackham calls them. 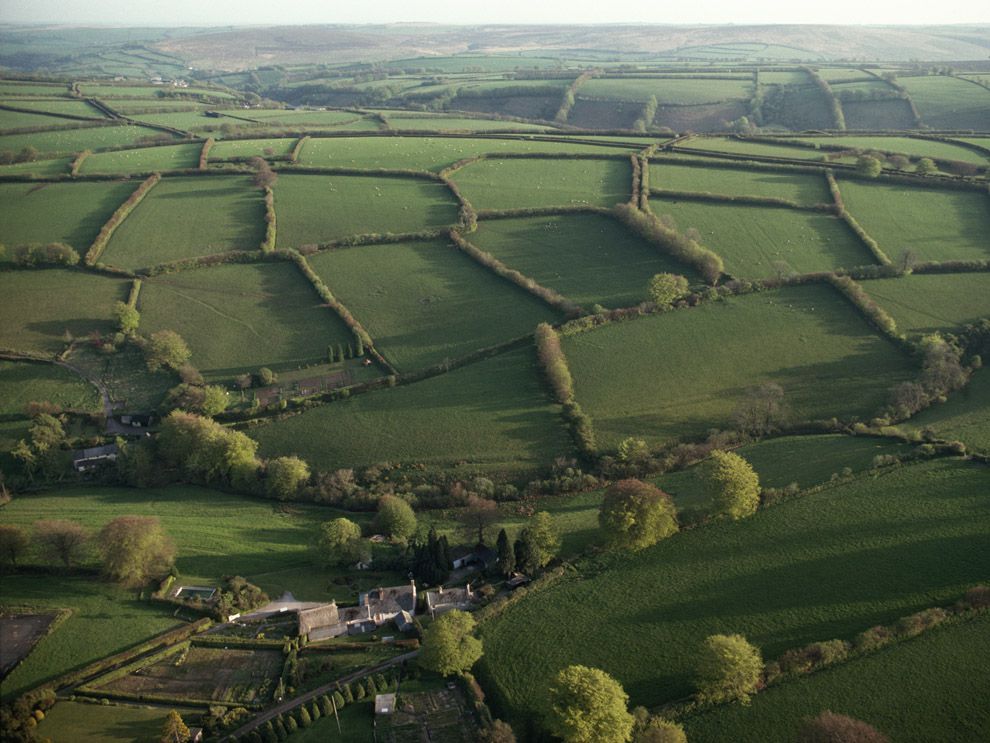 These trees and shrubs of hedgerows, the "patchwork quilts of the English countryside," serve as historic and contemporary boundary lines. Somerset. [o]

The reason they survived is because they were useful as a boundary marker that could be made stock-proof (resistant to livestock) by laying the hedge every eight to twenty years. This was essential before barbed wire became widely available in the 1970’s, but today hedge-laying is a dying art, kept alive by enthusiasts and a few farmers. To lay a hedge, you cut each tree or shrub part way through its stem, then bend it over and lay it down horizontally to make a barrier from which strong new growth extends upwards. But of course it’s not as simple as that. Hedge-laying is hard, time-consuming, skilled work.

Most field hedges in the UK these days are managed using a tractor-mounted flail mower. Down the road, our neighbour cut his hedge so low and so frequently that it barely clung to life. I found the sight of it painful, a sad indictment of modern farming. I decided to leave mine alone. It grew for eleven years (the ash log among it) until it was five-foot wide and fifteen-foot tall. People started to complain. The same neighbour moaned that the branches caught the plastic on his silage bales as he drove past. A French woman said to me once, “Your hedges are very bad for tourism. ‘ow can we see the view?”

Callum is lanky as a leggy ash tree and part of a younger generation of professional foresters who care deeply about trees and about the legacy they leave. He is pragmatic enough to use chainsaws and respectful of historical ways of working. 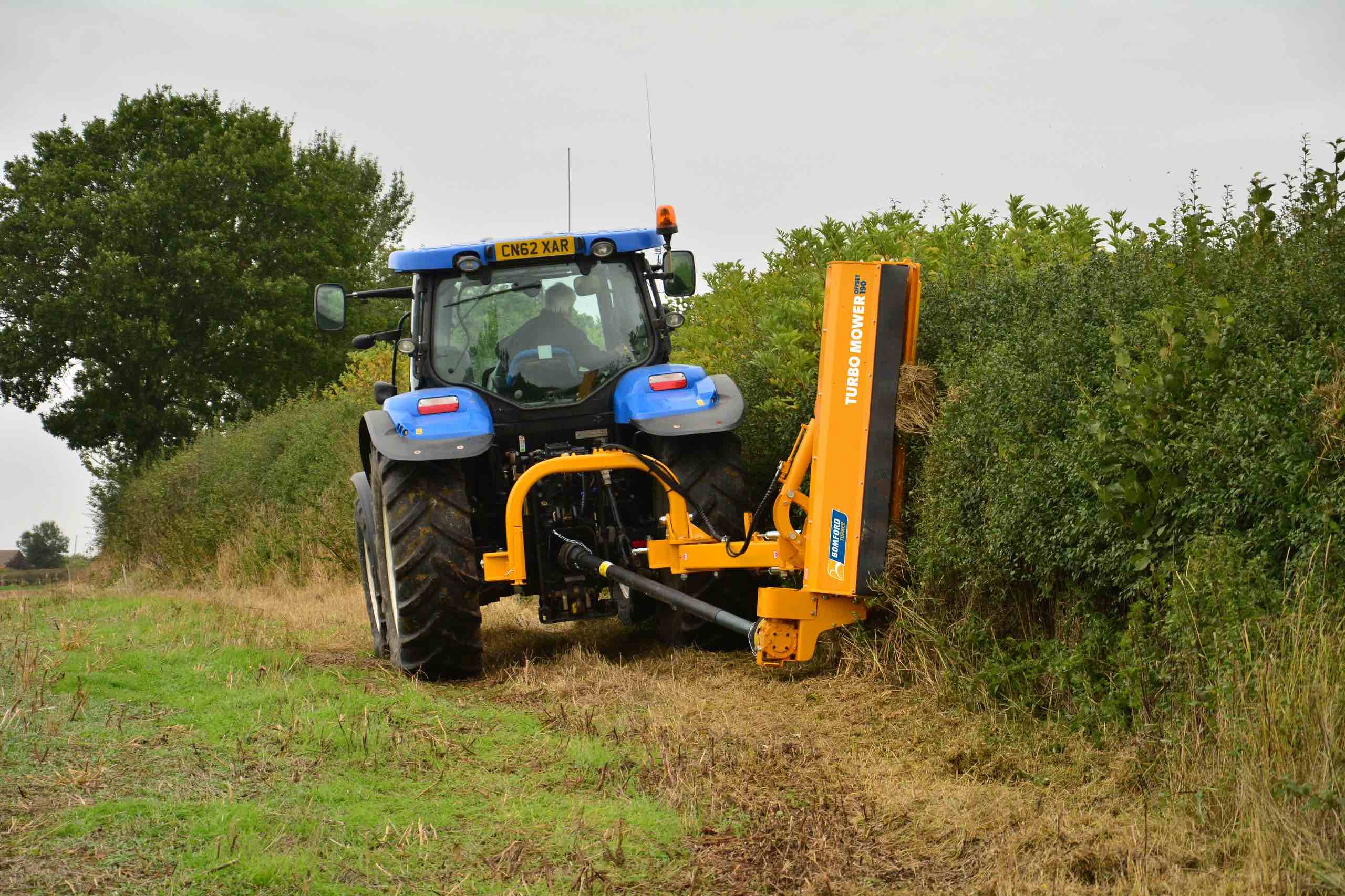 A tractor-mounted flail mower . . . our neighbour cut his hedge so low that it barely clung to life. [o]

A couple of weeks later Callum’s pickup rolled down the track. The chainsaw roared and screeched all day as he turned the hedge from a row of spindly trees into a horizontal barrier, one small tree trunk stacked neatly on top of another. A pile of brush and offcuts accumulated in the field behind him as he worked. We extracted the usable firewood from the pile and dragged the rest to the middle of the field where it lay for weeks until we burnt it on a bonfire.

Nothing would have been wasted in centuries past. Long, flexible hazel rods were used for hurdles; ash and maple for tool and door handles; oak, if big enough, for building; blackberries, sloes and hazelnuts to eat; rosehips and herbs for medicine; brushwood for temporary stock barriers or dead-hedges — barriers constructed from cut branches, saplings, and foliage. Wood not useful for anything else was burnt for fuel, even the twiggy bits which were bound into faggots, three or four foot long, to go straight into a huge inglenook fireplace.

Collecting ‘hedgebote’ — any product from a hedge — was a valued right for the lucky few in medieval times. Historical court records are full of accusations by landowners that peasants with no rights of hedgebote were stealing from their hedges. Even in the late twentieth century, older farmers recalled the trimmings from laid hedges being sufficient firewood for a farmhouse for the whole year. Before gas cookers, coal, and electricity, hedges would have provided the only source of energy for all uses: cooking, heating, hot water and lighting in the dark winter months.

Callum worked solidly all day — cutting, twisting, bending, trimming, stopping for half an hour at lunchtime. It was slow work, even with the chainsaw. By the end of the day he had done about 12 metres. The 100m hedge took nine days. 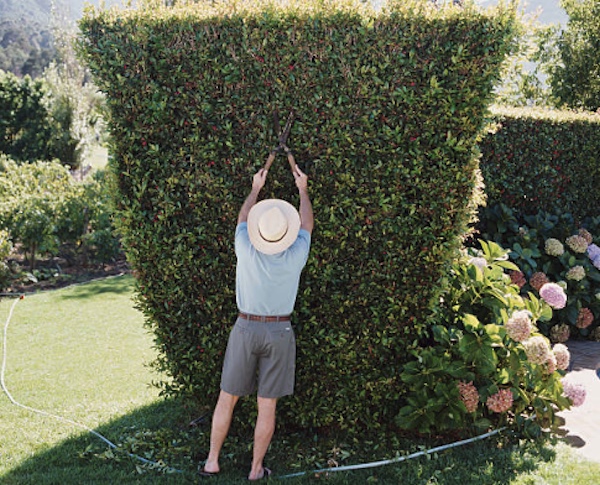 It gave me a new insight into the labour of maintaining the countryside of the past, and the reason for flailed hedges. If we consider the miles and miles of hedgerow in the South West (33,000 in Devon alone), and how expensive labour is, and that you have barbed wire to keep your stock in, and central heating and a gas cooker in your farmhouse, why on earth would you carry on laying your hedges? The wonder is that a few farmers still do.

Today, at my new home on the Devon coast, it’s time to tackle the huge pile of cuttings from the overgrown elaeagnus hedge we recently cut down. I get the loppers and soon there is a pile of twigs and branches, ready to be cut into lengths. Having just installed a woodburner in my writing shed, this hedgebote is too good to waste. Yet, I’m out of step with the times. There is news in the UK of the pollution caused by burning wood, even of the possible banning of woodburners in towns. But I reason that, cosy in my wood-heated shed, I am avoiding using the gas central heating in the house. Since burning wood is a carbon-neutral form of energy, and I am using wood that would otherwise go to waste. It seems to make sense.

I keep looking at that well-seasoned bit of ash on the bookshelf. It would fit nicely in the wood burner.

The downside is that the wood burner is tiny. Unlike country folk in the past with their huge fireplaces, I have to cut lengths of wood to ten inches or less. It’s painstaking work for a small amount of fuel that I won’t be able to use until it dries out, a year at least. But it’s satisfying to turn a waste product into something useful. And I have the leisure time to do it these days. Meanwhile, it’s cold and I’m short of dry wood to burn. I keep looking at that well-seasoned bit of ash on the bookshelf. It would fit nicely in the wood burner.

But I won’t  burnt it,for the same reason I wouldn’t burn an old washed-out photo of friends. Even if I no longer keep in touch with them. ≈ç

MANDY GODDARD is a market gardener turned writer. Writing from her own life experience, she is inspired by the human interaction with the natural world. Currently completing a PhD in creative writing at Exeter University, she lives with her family on the South Devon coast.