Letting the Garden Be

Category
Finding & Foraging
Gardenalia
Soil & Terrain
Letting the Garden Be
by Rebecca Weil
Published: Jun 05, 2022
Standfirst
A little knowledge can go a long way, but too much often keeps us from noticing what's going on right before our eyes. Devoted to her scholarly resource materials on soil science, the author decides to leave them behind and pay closer attention to her garden's self-determination.
Body

The author's vegetable garden on a misty morning. [Author photo.]

Once there was a sagging shelf of books that told me the perfect way to make soil. They told me a scientific process so specific it gave me an ache and internal paralysis with the worry of doing it wrong. The books were so certain.

In the garden when I was working in the rain the books got wet and muddy and torn. To protect them I left them on the shelf. One might say I let go, and the garden and I were better for it.

I started to notice things, particular things. The weeds I had been pulling were beautiful in their blooming; and they were strong and independent, seeding themselves where they liked. Surging up early and blossoming far sooner than any domesticated flower I could plant, they beckoned the early pollinators, helping the other crops along. Sending their roots down deep, breaking up the clay and bringing up the minerals, they made way for the more domestic roots to gather strength. Who hasn’t wondered at the depth a burdock can go with its tenacious taproot?

My layering became a loose and casual affair of adding almost anything that was at hand . . .

Despite a fence to keep them out, the rabbits built nests under the blueberry bushes. In their downy nests of breast fur I found the curled, warm bodies of the breathing kits — rapid hearts tapping, yet fearless in their mother’s home. They were too young to move so I peeked at their still closed eyes, ears tucked in close to their heads. There in the blueberries was the mother’s entry where she could come and go to nurse, an open door for her dusk to dawn visits.

The dog caught voles in his jaws and shook them fiercely to snap their spines. In reflex, I scolded him and he stopped. The voles had begun channelling through the potatoes and beets, leaving tooth mark evidence and runnels in the soil. Wondering about a vole’s life underground, I realized that by tunnelling in the dark soil they were probably contributing in a way I didn’t understand, I planted more root crops so there was enough for our family and the voles, too.

In the late summer harvest, I missed some garlic bulbs and the next year found their spring shoots in bunches, tender and mildly pungent and full of whimsy. From then on I began leaving them to spread where they wanted — to harvest as early greens before anything else was ready. 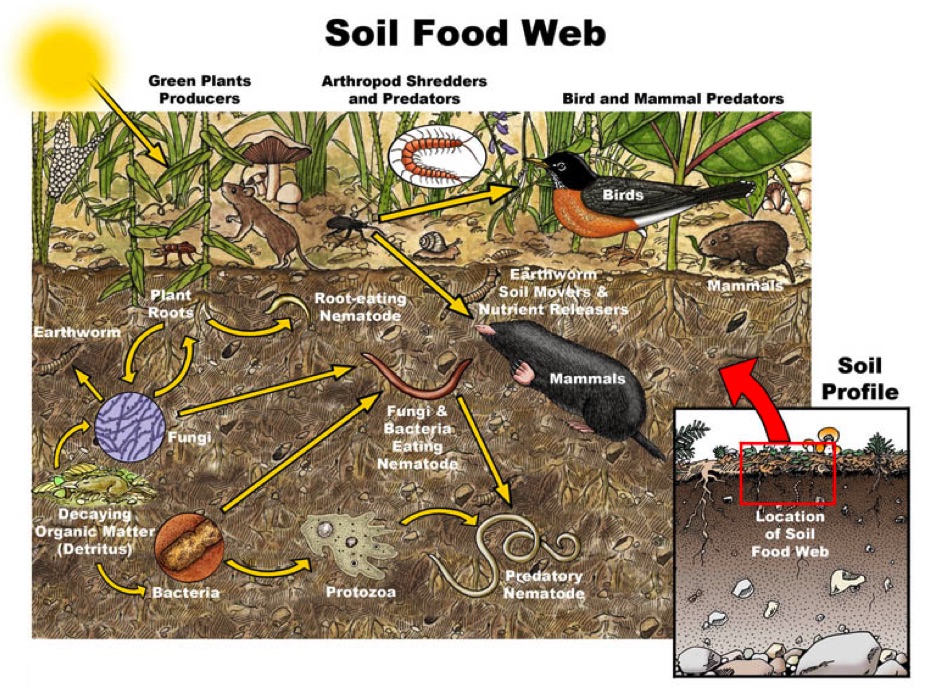 "I realized that by tunnelling in the dark soil the voles were probably contributing in a way I didn’t understand. Illustration by Sheri Amsel [o].

Somewhere along the way I stopped tilling. The soil here was heavy clay, so dense that even the trees had trouble, surely it seemed it would need to be turned. However, our donkey, horse, and chickens provided ample manure and leftover hay, so by layering those into the ground then adding leaves, vegetable scraps, wood ash from the stove, or anything at hand, the beds were a good meal of different flavours.

The books I had studied proposed a precise balance of carbon, nitrogen and phosphorus, and many very different and very scientific ways to perfectly compost. Turning and testing and temperature taking. Thankfully their hold on me was now gone and my layering was becoming a loose and casual affair of adding almost anything that was at hand. And, letting the worms and voles and plants work the soil into something loamy and luscious.

In turn, they announced when the pile was ready to plant. I would stack hot manure on an area until early-winter, and then let it sit to run its heat out and settle down. By the time spring came and I could no longer smell the manure. With the worms thick in it, I figured it must be ready. (What worm would lie?) Planting tomatoes and squash right into the nutrient-heavy bed, they thrived. These days I roam the garden, adding hot toppings to a bed that then rests for a season, then adding broken-down compost as top dressing to the other beds so they can take the more tender seeds in the spring. Common sense comes into the mix: don’t add raw manure where you are planting to eat; let things break down; let the weather work its way through the pile. 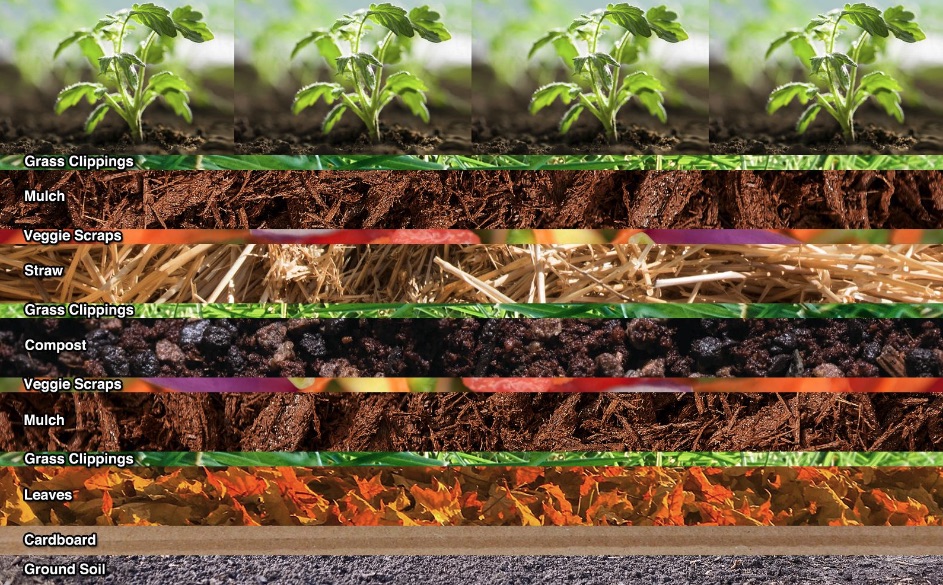 The 'lasagna garden' plays off of the author's discovery of using a variety of findings to build up a bed. [o]

As layering took over and the tilling stopped, self-seeding came in with glorious abandon. The kale dropped seed and came back, and the hardier kale, not pulled in the fall, re-sprouted from the stalk. The dill, coriander, calendula, sunflowers, and the blues of borage, scattered to where they found footing — where they wanted to be,  choosing their pH, not me. All these plants were stronger for self-placing. It became a spring game: to identify who was sprouting, or where the mice had planted seeds. Sometimes the mice moved an entire bed of pumpkins. Looking at the empty hills, puzzled, I wondered what had happened. Then I saw that the pumpkins and squashes were sprouting up behind my back, in a different arrangement than I'd done.

Was it laziness that led to not watering after the seeds germinated? Perhaps it started that way. Mulching rapidly became my friend. As I layered old hay on the beds it retained moisture and reduced weeds, while making it made the worms happier as they now had a cool topping to the soil and more organic matter to work on.

The acidic pine needles and bark that the blueberries craved were welcome terrain for the wild and sour sorrel to expand its hold, a ready patch for soup, and an indicator of good pH for the blueberries. No test kit needed. As the wild came in, the lambs quarters became my quick spring spinach, and showed me where the barn had increased the soil nitrates. When the lambs quarters got too leggy, or more than we could keep up with, they became greens to feed the delighted chickens, true to their nickname of 'fat hen,' and translated into richness in the hens’ eggs. Purslane arrived, too, low and succulent – and I nipped it into my salad bowl.

The wild from the meadow and the hay fields enters each year now, all on its own. The wild vetch blooms along the edges of the beds, cheerful and full of spring insects and bees. Toads arrive and I feel immeasurably lighter, as if something is right in the garden when a toad sets up home.

Perhaps one day, I will bury those perfect garden books in the soil to return their words to the ground, so they too can become wild, weedy, loamy. ≈ç

REBECCA WEIL (previously published name, Rebecca A. Reynolds) is the author of award-winning Bring Me the Ocean, Nature as Teacher, Messenger, and Intermediary. For ten years she was the director of The Nature Connection, bringing nature and animals and the arts to people to build connections. She co-founded the group Growing Community Cooperstown and the Community Harvest Supper, bringing people together to share gardening knowledge and to grow and share food. She lives in Cooperstown, New York.

What a wonderful piece, Rebecca! I love that final sentence so much!

So fabulous! Thank you.

That piece is deliciously lovely. I giggled and enjoyed myself as I read it, envisioning the images of animals and plants and the worms nourished by the lovely soil layers. Your garden reminds me of my mother's when I was a kid. Much appreciation for sharing your story.

This is so wonderful! I love your commitment to the natural environment and the beauty of your prose in sharing your vision and experience. So happy you were found by such a fecund environment for your fertile imagination. Much love to you and your family.

"Toads arrive and I feel immeasurably lighter, as if something is right in the garden when a toad sets up home." Love that!

A beautiful early evening read to make me smile as I have lived thru so many of the things you put into words😀🥹. Thank you, Rebecca. You have made me happy with your words put here to share. A really nice gift.

What a wonderful world of…

What a wonderful world of…

What a wonderful world of garden and valves and mischief and compost — and nature doing its marvellous things, all at once. Loved every word. Thank you.

Thankfulness to my father…

Thankfulness to my father…

Thankfulness to my father who told me on the topic of this weblog, this blog is really awesome.