Category
Eating & Drinking
Movements & Communities
Gardenalia
Mr. Fawcett's Neighbourhood
by Brian Fawcett
Published: Apr 03, 2022
Standfirst
Brian Fawcett, who died in February at the age of 77, was a writer and gardener who grew up in a no-nonsense town in northern British Columbia where people survived by their wits, fists, and doing well by their neighbours. In such places, he was fond of saying, everyone helped everyone else. When Brian came to the big city he started making tomato sauce with his Italian neighbours. As a parting gift he left us the instructions. (Thank you.)
Body

"Whatever his other bona fides may be, he has never made tomato sauce." [o]

Tucci is knowledgeable about Italian-American cuisine, and he seems like a guy who’d be fun in a well-equipped kitchen. He’s even Calabrese, from Sera San Bruno, the global capital of porcini mushrooms.

Then there’s his beyond-silly recipe for tomato sauce, which I’ve copied below so there’ll be no issue about just how impractical and ridiculous it is. Stanley Tucci, whatever his other bona fides may be, has never made tomato sauce:

Bushels of tomatoes (you decide how many)
Salt
Fresh basil

One outdoor open fireplace or fire pit, with heavy metal grates
Fire
Two large galvanized aluminum tubs
One white pillowcase
Lots of old long-necked glass soda bottles
One ladle
One funnel
Lots of new soda bottle caps
One bottle-capping device
One thick piece of oilcloth big enough to cover one of the tubs
Enough water to fill one of the tubs
Make the fire.

It’s hard to know where to begin on this nonsense, so I’ll start at the top and pick out the lowlights for you.

There’s now some urgency to this, because, well, I’m dying, and I’ll be gone inside a week or two.

Making tomato sauce over an open pit is nice and romantic, but it’ll just get your tomatoes filled with soot and debris, and won’t improve the flavour. Neither will the salt and the basil, which will merely shorten the storage life of the sauce. And whatever you do, don’t use aluminum tubs. Tomatoes are acidic, and will peel aluminum ions from the sides of the tubs, and you and your friends will all be suffering from dementia in 25 years.

Punching tomatoes in a pillowcase might be fun for 20 minutes, but five bushels of tomatoes would take roughly a week for four or five people to process this way, and pillowcase cotton is far too fine to squeeze the sauce through to begin with. Then there’s the issue of just what in hell the impenetrable sailcloth of Tucci’s recipe is supposed to do, or how you’re going to assemble 300-400 7-10 narrow-necked pop bottles, or funnel still-choppy tomato scraps into them, etc, etc.

Okay, I’ll stop ragging on Mr. Tucci about this, and get to my real purpose in writing this. I spent years working my way up in a Euclid Avenue tomato sauce making group. We — four or five Calabrese families and their remarkable alpha females with me as their Anglo gopher — would typically process as many as 45 bushels of Roma tomatoes over a couple of days, with as much as 600 litre bottles of tomato sauce stacked in cardboard at the end. Now that most of the alpha women are gone, my Anglo friends have asked me to deliver to them their actual recipe for making tomato sauce. And there’s now some urgency to this, because, well, I’m dying, and I’ll be gone inside a week or two.

This will be a 5 bushel recipe. It requires 5 people willing to work hard from about 10 am to 4 pm under supervision. You can’t make very good tomato sauce while you’re arguing over how to do it: the Calabrese alpha females made it clear someone has to be in charge. It helps if everyone likes one another.

An open garage, swept clean, hosed down, and cleared of automobiles.

A 5/8 inch hose hooked up to a source of warm water. (work it out. That’s what hardware stores are for)

1 large (15 inch) propane burner (or two, if you have another cooking pot or a 45 gallon curing barrel with two large full tanks of propane, because you may need them).

One large commercial tomato grinder. They cost about $500, but they’re not optional, and don’t buy a cheap one.

A bunch of Polish broadswords—those butter-steak knives you see in cheap restaurants.  They have serrated blades that will easily cut through tomato skins and curved tips so you don’t accidentally stab yourself to death.

At least five dozen litre bottles with Bernardin lids, (or 12 dozen pint jars). Better to have lots of those other kinds of saved jars you’ve got lying around in case the yield is more generous.

5 bushels of Roma tomatoes. In Toronto, Romas can go for anywhere from $15 to $25 a bushel, depending on when and where you’re buying.  Look for tomatoes that are ripe and without green spots. You can buy two days before to ensure optimum ripeness. Don’t make tomato sauce with non-paste tomatoes, because you’ll get half the yield per bushel. Small batch sauce made from cherry tomatoes are fun and very sweet, but they’re a lot of work.

A mid-size Italian bedspread, or 1.5-2 metre square chunk of one. The cloth weave must be such that boiled tomatoes will sit on it while the excess liquid drains through without letting any of the tomato pulp through. This will work infinitely better than punching pillowcases. You will need a wooden circular bushel basket over which to suspend the bedspread when you put the cooked tomato mash to drain.

Many large pails — 5 gallon ones are optimal but you’ll need plenty of smaller bowls and buckets. You’ll also need a couple of large stainless steel saucepans. They don’t have to be top-of-the-line. You’ll also need a sturdy stir stick, and by that I mean a dedicated wooden spoon at least 3 feet in length, with the sturdiness of a 2×4. (You can use a 2×4, but you’ll get more blisters). Stirring a tomato mash isn’t for sissies. 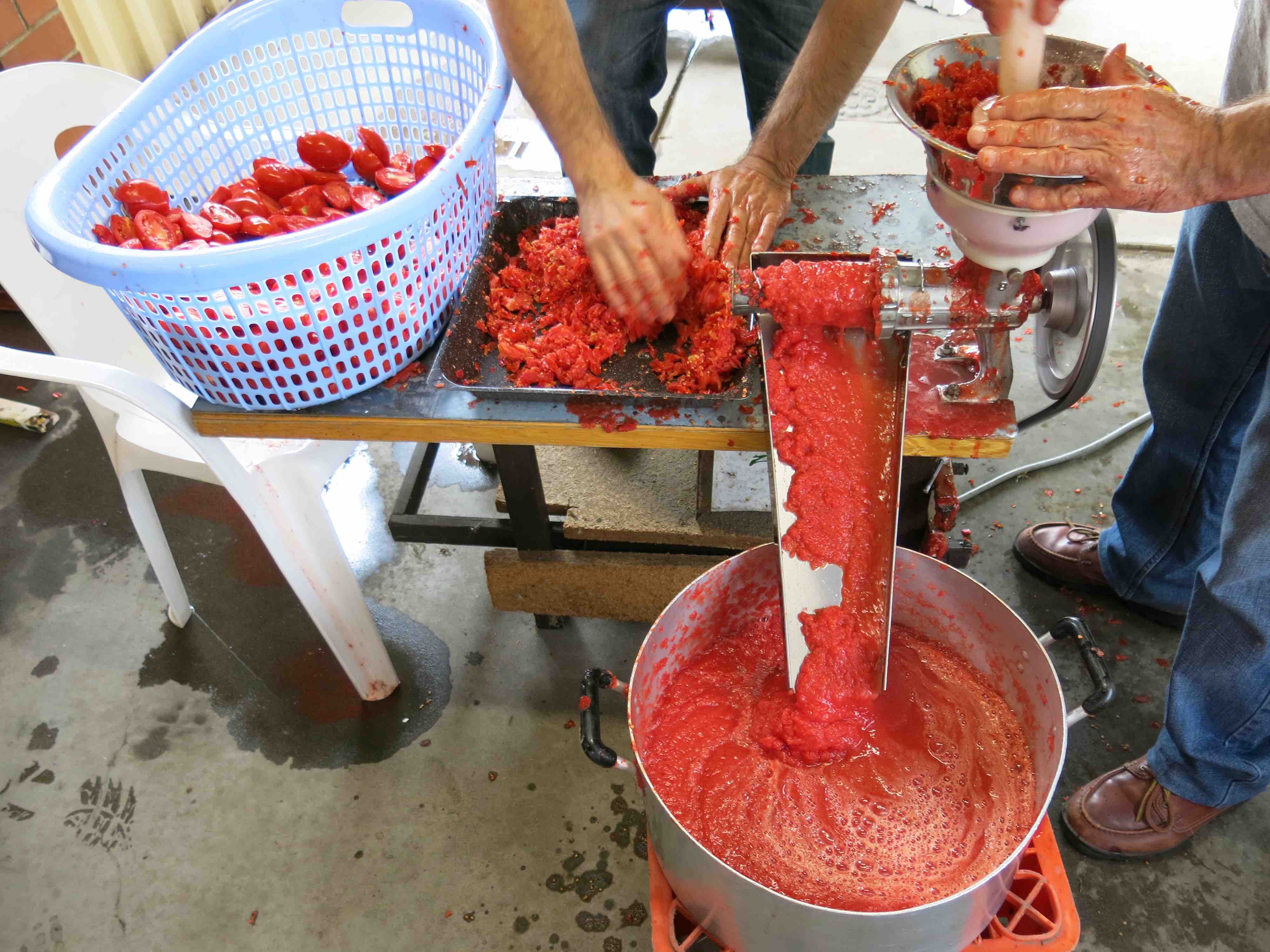 It's kind of a garage band thing. [o]

I think that’s it for equipment. Let’s start to make tomato sauce.

Wash the tomatoes in large plastic pains in warm water. Do this carefully, or you’ll get god knows what gook in your tomato mash. One person can do this.

With the washed tomatoes pulled from the wash pail and inspected, your crew can start to cut open the tomatoes and put them in the cooking pot. First you cut out the stem joint with the Polish broadsword without wasting half the tomato. Then, at the blossom end, you place two cuts so that the tomatoes look a little like a splayed fig. Into the pot they go!

When the cooking pot is two-thirds full, turn on the heat. One person should take responsibility for this work — easy to shift off, but tomatoes burn easily and a burned mash that got there because someone was on their cell phone or otherwise dithering is a serious loss. It’s also, as noted above, hard work: you must lift the bottom tomatoes in the mash to the surface over and over to keep them from burning.

When the tomatoes begin to boil (don’t take them to a rolling boil, just keep them stirred) turn off the burner, and with one of the saucepans, shovel the hot mash into the bedspread you’ve hung over the bushel basket. When a sizeable volume of the liquid has drained off and you think your mash has the consistency that’ll make a good sauce, use the saucepans to put it into 5 gallon pails. Set aside, and repeat until all your washed, examined, and cut tomatoes have been cooked, drained and are in pails

These are middle class people, and once you get them past that 10-4 work period things can get flaky very quickly.

Oil the grinder coil and mesh and start up the grinder, and with one person feeding the mash into its bowl, another making sure the sauce is going safely into yet more clean 5 gallon pails, and a third person catching and recycling the skins and seeds through the grinder again to capture their flavour (I put them through three times, but I know people who only run them again once, for fear of imparting a bitterness to the sauce). The other two crew members, meanwhile can start bottling the finished sauce, which will be lukewarm, hand-tightening the lids and stacking them in the (carefully cleaned out) cooking pot or 45 gallon barrel. No, you don’t put salt in it or basil. You put anchovies in it when you’re making the sofrito for your pasta sauce, and that’s when you put in the fresh basil, too. (You remove the basil before eating, by the way) .

You’ll have 60-70 litres of tomato sauce, which will be more than the capacity of the cooking pot but will fit nicely in a 45 gallon barrel.

Fill the pot or barrel, turn on the heat and bring the whole thing to a hard boil — you’re curing your sauce now, so don’t get careless — cover and let cool. If you’re using litre jars, let it boil a little longer, for obvious reasons.

You can make larger batches by adding a worker per bushel. It’s not wise to mess with that ratio, for about six different reasons: these are middle class people, and once you get them past that 10-4 work period things can get flaky very quickly because they’re not used to hard labour. And since they’re basically cats, you don’t want to be herding a lot of them to finish the job. ≈ç 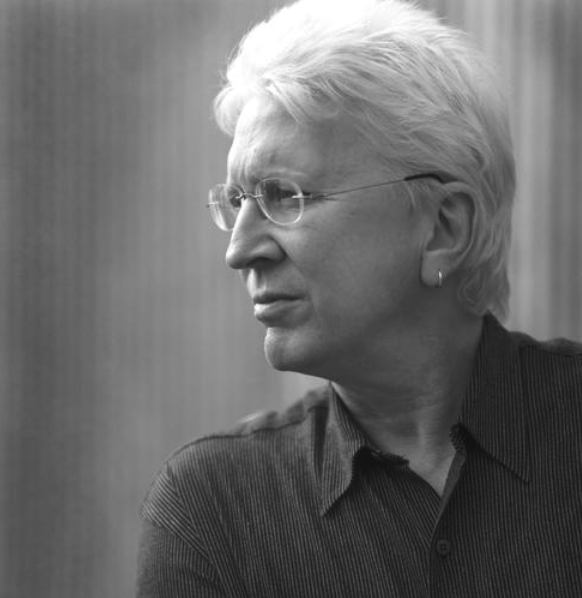 If you're hungry for more from Mr. Fawcett's neighbourhood, here's a report written by one of his tomato mashers — 'Making Tomato Sauce, Calabrese Style.'

BRIAN FAWCETT was a writer and cultural analyst. Before becoming a full-time writer, he worked as an urban planner. Author of more than twenty books in fiction, poetry and non-fiction, he won the 2003 Pearson Prize for Canadian non-fiction for Virtual Clearcut: Or, the Way Things Are in My Hometown. He lived in Toronto.

This article was first published on March 2, 2022 on dooneyscafe.com, a "news service" and "state of mind" Brian worked on since 2001.

I am terribly sad to hear…

I am terribly sad to hear…

I am terribly sad to hear about Brian's passing. I was one of the lucky ones who got to participate in the annual sauce-making on Euclid Avenue many summers ago. He was a terrific chef and an inspiring gardener and he did not suffer fools. May he Rest in Peace.