NOK&T: Love and art in healing

This is a story, much of it in their own words, of a Dutch female art duo who have put their lives together for the purpose of love, art and healing.

Their lives and careers are lived as a whole piece in all three areas with very conscious determination. Yet if I were to ask what is the essence of their collaboration — what is the unifying force that brought them together and continues to fuel their lives and work? — I would say the archaelology of the personal. For Theme Bannenberg and Nok Snel, the road from trauma and recovery to health is a daily practice as much as it is memory and historical progression.

How I came to hear about Theme and Nok was through one of our contributors, an American in Berlin, who said I needed to meet them and that they might have something to offer The Journal of Wild Culture. “Confrontation,” he wrote, “is their drive.”

A dialogue is heard between their private turmoil and the way they witness violence and pain out in the world.

Indeed it was. In the first email I received from Theme — the T of NOK&T, their porfessional name — the facts of their personal stories were stated plainly. (Sometimes NOK&T is written T&NOK. "It depends on our mood," says Theme.)

“After years of depression, we found each other," wrote Theme. "Every day we confront each other. Via our work we show it all the way. Nok, born in 1961, is a postwar-child of a Jewish mother who survived the Japanese camps in Indonesia. 10 years ago her mother committed suicide at the age of 72. Me, T, born in 1953, I was sexually abused in childhood by a Roman Catholic priest who had, until he died two years ago, a surreptitious relationship with my mother.”

As I began to view their work — first with Slopes to Dwell On, a hypnotic part road movie/slideshow sequence comprised of still landscape images of northeastern France where the battles of the First World War once raged — a dialogue is heard between their private turmoil and the way they witness violence and pain out in the world through their art. Private and public feed off of each other. And in other works such as Bipolar Balcony, Unraveling and Behind Closed Doors, and Break the Silence, outer terror is brought home by the duo's self-reflective documented journeys.

”It seems important to Nok and T that the viewer always has a sense of their entire practice,” Hannah Simons wrote in Art Review. "In each project the artwork becomes documentation, or the documentation becomes artwork.”

As Theme and I continued to correspond for this article, I became intrigued with the profound passion of their multi-dimensional struggle — passion in the religious and spiritual sense of the word. What Theme had to say about the journey that she and Nok had taken showed how their being and doing in the present was strongly linked to their proactive reconfiguring of the past.

It also revealed to us that the person who had gone through all that ought to be the one to give voice to it. Here is that voice . . .

In my vagabond existence, being so down, I couldn't stop creating. 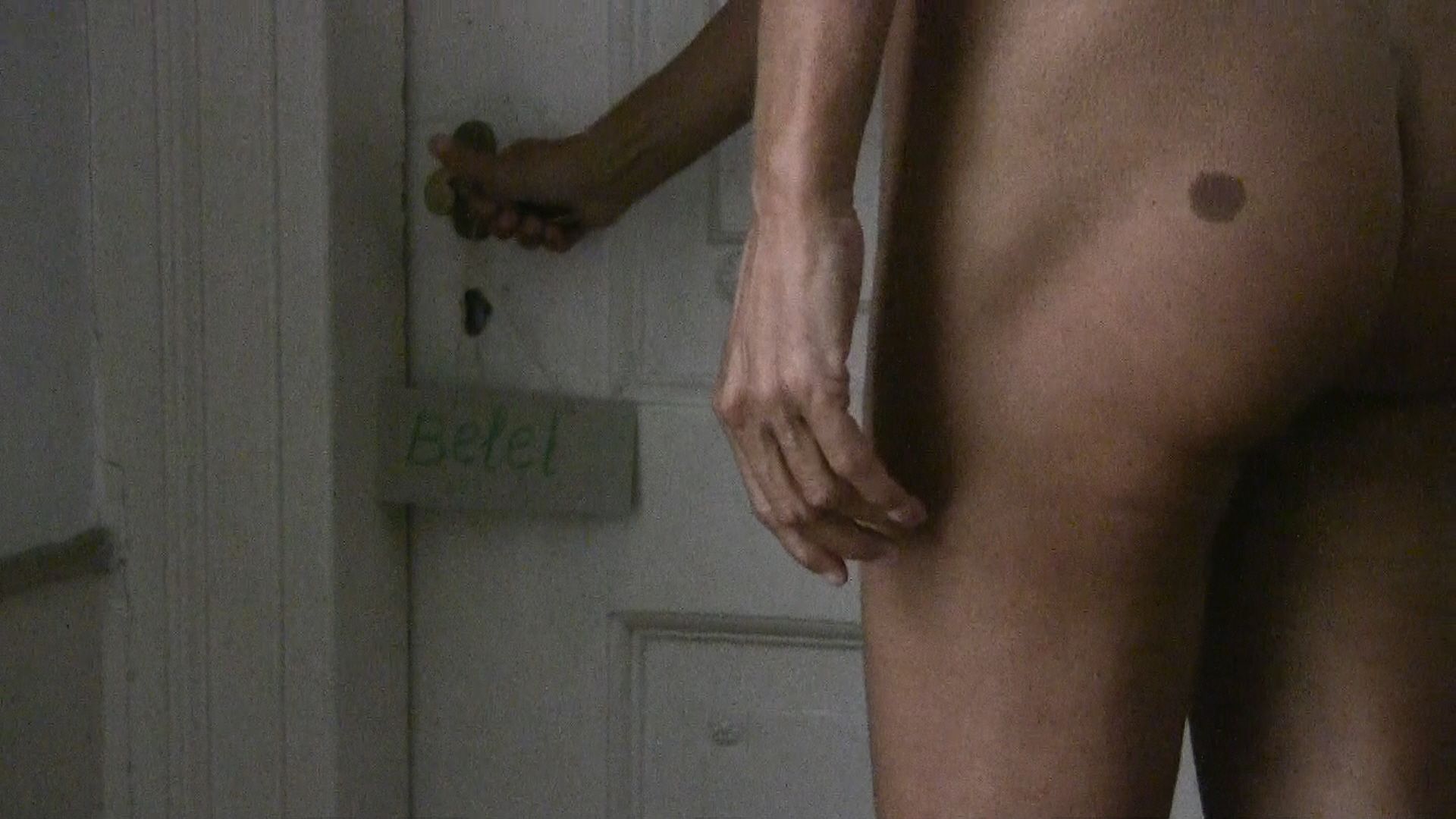 Theme Bannenberg on the story of NOK&T

Although the Netherlands are flat, I met Nok 25 years ago on the edge of an abyss in a coffee shop in the center of Amsterdam. It was our fate. Both of us did not want to live anymore. Our troublesome past made it all too heavy. We started talking. Bit by bit, we shared our story.

The truth came up. This took years. It opened our eyes. The fear, the guilt, the shame, the depressions, the drives — we ended up at shrinks and we both got several labels. Bipolar trauma was one.

We put hard drugs like speed, heroin and cocaine aside, received regular medication and a place to live together. In Amsterdam East, a ghetto for the riffraff, we cut ourselves off for seven years. Without a phone, without any communication except ourselves and our shrinks, we have fought through it by confronting each other daily. In our imagination we created a mass grave. That’s how we took farewells from family, friends and acquaintances.

Living within it, living with it, and living without it in freedom and captivity . . .

Meanwhile, I wrote all about me, which inspired Nok. She began to draw and paint. In my vagabond existence, being so down, I couldn't stop creating. It was and is my survival. Partly due to the fact I have that drive, Nok and I made it.

In 2000, the city of Amsterdam offered us a studio. We picked out some members returned from the so-called mass grave. We confronted our abusers with no result. That was painful but clear. We came among men. Nok exhibited drawings and sculpture, me paintings and objects. We participated in group exhibitions. I learned how to deal with a PC and was crazy about the shape of the computer key (from the last century). We produced in collaboration with Art Unlimited the NOKKEY, a magnetic key. A four-letter word postcard that came on the market. You could choose between +/- 35 words (like fool, love, cool, nerd, shit, bird, etc.). In our studio in Amsterdam is one space completely filled with 68,000 +/- glued and magnetic computer keys, called the LUCKKEY LOUNGE installation. A “writers block” is also present in the installation. 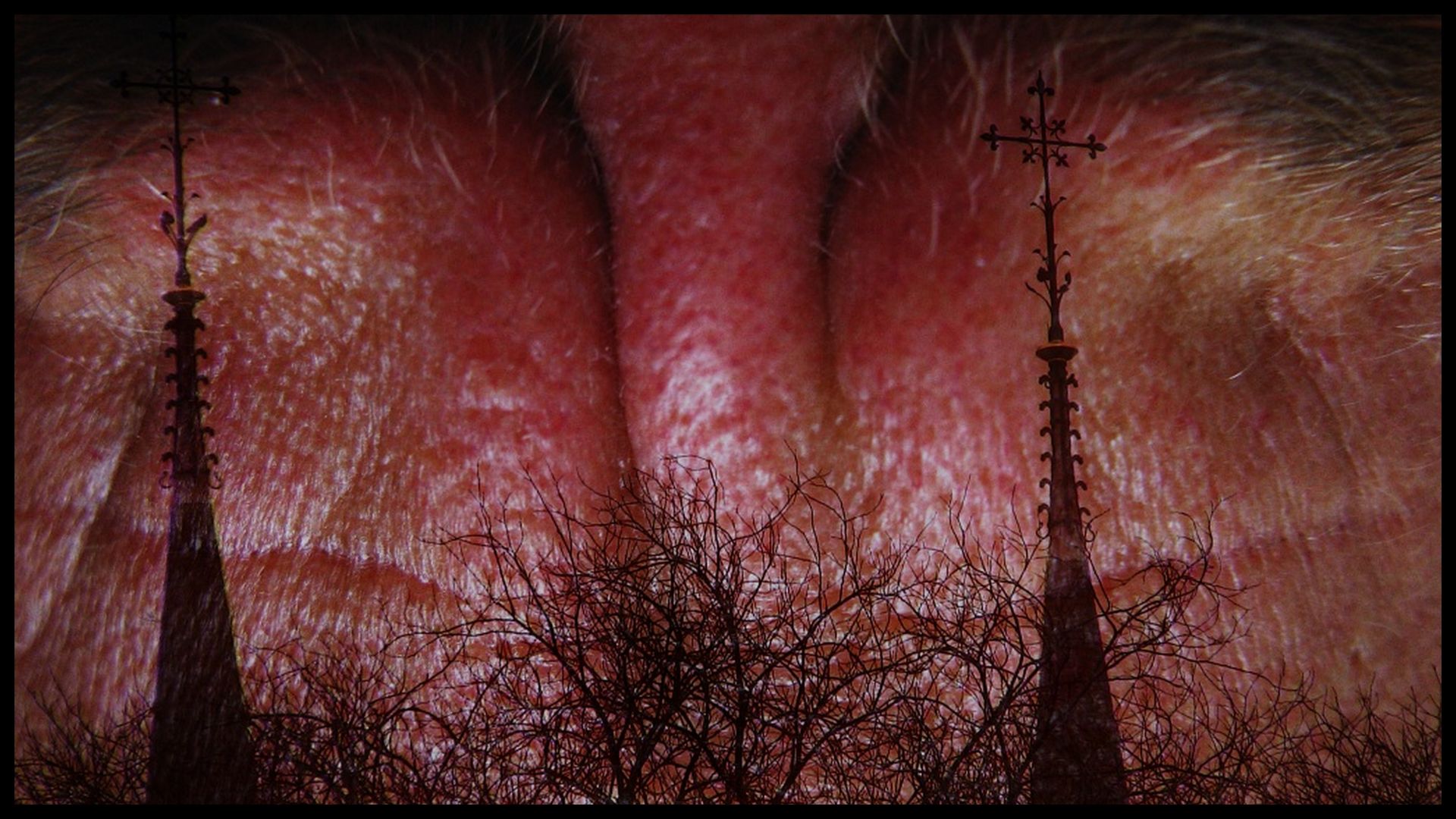 My love for photography was developed as a teenager on the canal boats across from Amsterdam’s Central Station. Boarding the boat I made pictures of tourists. Then the digital era dawned and there was no holding me back. Nok, my muse, was the perfect performer. Many photo and video series followed.

When we discovered Nok had breast cancer in 2008, the cancer had already spread. Thanks to her insane positivity we re-created ourselves through it. We made a daily video sequence of the entire process, knowing full well that she could also die. Many people followed the series at Saatchi Online. Facebook threw us out the first time they saw a nipple though it was obviously clear that the subject was breast cancer. Even Pink Ribbon was following us. You will understand; FB sucks forever. Nok has saved it. In mid-March she must go again for verification to the hospital. One of the toughest things in our lives . . . waiting for the results.

Also in 2008 there were more and more reports of sexual abuse by members of the Roman Catholic church. Thanks to a pious aunt I got a conversation with Bishop Punt in Haarlem. There I could tell my story. The bishop called upon his staff member and suspended him. That gave me some breath.

There is nothing in our way. We confront each other daily. We laugh and cry and begin to enjoy life.

In 2010, it was Easter, the bomb exploded when I consciously looked at "urbi et orbi" on TV — as expected clarification of the Pope in his speech. Not a word did he report about sexual abuse, which had already expanded in all those boys boarding schools. The next day I called the Volkskrant, a well known newspaper. I had to tell the world. Right against injustice! Ivanhoe! Girls are also the dick (this is a Dutch expression; somebody is ‘the dick’).

Two weeks later the interview (by Peter de Graaf) and the rebuttal of my abuser was in the newspaper. He misspoke himself on all sides. Many shocked reactions followed. With the video Behind Closed Doors began the series #breakthesilenceproject. In the same series we presented Holy Shit two years later. The latest video in this series is Bipolar Balcony. Living within it, living with it, and living without it in freedom and captivity, and the extreme mood swings that result. Many people have a trauma (PTSD, etc.) and don't dare to share it.

Speaking of contradiction: we are similitude and antithesis. Nok and I each do what we do best. That we are adventurers down to the bone is clear. We enjoyed no art training and had a shitty life. In other words, we are self-taught with a future full of inspiration. There is nothing in our way. We confront each other daily. We laugh and cry and begin to enjoy life. Our goal is at least 10 minutes "carefree sunbathing". We produce everything that comes our way, sensible and nonsensical work. We spit on fundamentalist beliefs. We honor victims and survivors of any war with the video One Minute Silence. In the video Unraveling #breakthesilenceproject we explore the cruel boundaries of humanity. The most disconcerting part was that Nok and I felt in a way “at home” in Dachau. 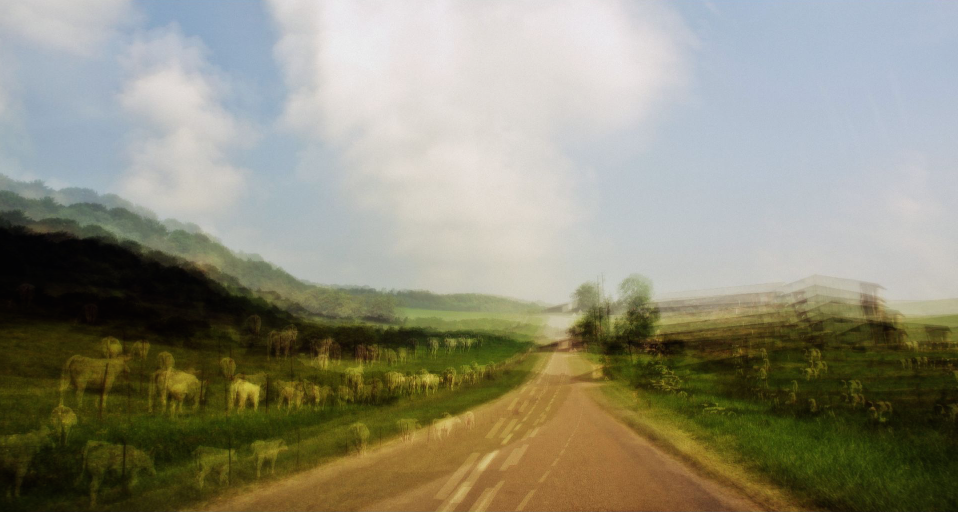 Theme's introduction to SLOPES TO DWELL ON

Now living away from the speed of the city, it’s a small step towards Slopes to Dwell On. The photographs, 200 images, are crafted landscapes. Nok drives us through the seasons of northeastern France, while I shoot thousands of photos. Many layers of photos are meticulously positioned to achieve the effect of a landscape painting. because I cannot paint like this, I have overcome a great frustration.

Paris is only two hours away. No French urbanite who wants to live here or have a holiday wish. According to them, the French Ardennes are gloomy. The war still seems to be raging here, they think. The perfect place for NOK&T, we thought.

Not much has changed since the First World War. The slopes are lying there as shapely bodies, nature is bursting on all sides, there is peace and quiet, even for all the war graves, and the people who live here, mostly farmers, are cheerful and friendly.

UPDATE ON NOK'S HEALTH, MARCH 26, 2015 — Doctors have decalred that Nok is cancer-free. In Theme and Nok's words, "With these results we feel filthy rich and will spent it all! . . . the rest of our life. This is what it is, from our (serious) guts. For today. Good night. We will sleep like stabbed white baccarat roses." The editors of JWC are very pleased, as we expect our readers are, to hear this very wonderful news.

OTHER VIDEO WORKS BY NOK&T

BEHIND CLOSED DOORS (2010) reflects the research of the inner courage, the possibilities and limits, looking for affection and interpersonal contact. Using the naked body as language/communication tool it symbolizes the innocence which is facing old scars by walking through infinitely interconnected past and present.

HOLY SHIT (2012) exposes one long nightmare of sexual abuse by a pedo-priest of a dominant and isolated institute, the Roman Catholic church.

ONE MINUTE SILENCE (2012). The National Dachau monument is a memorial to the Dutch victims of the Dachau concentration camp. It is located in the Amsterdam Forest. The monument was designed by artist Niek Kemps. The road is uneven, which symbolizes that the prisoners had to walk on uneven footwear. In the blue stone are the names of 500 concentration camps and outside camps chiseled. 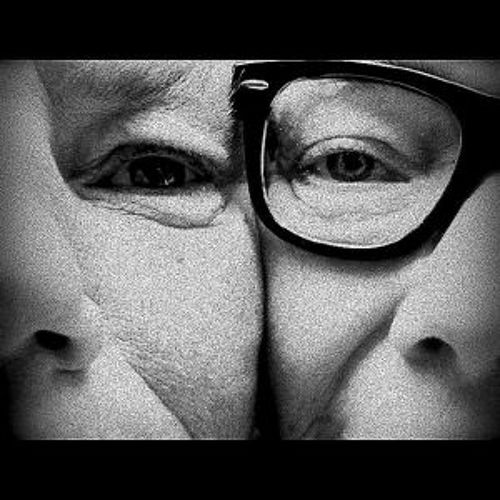 This article first appeared in The Journal of Wild Culture, March 10, 2015.

WHITNEY SMITH is the publisher/editor of The Journal of Wild Culture.

I am deeply moved by the

I am deeply moved by the

I am deeply moved by the account of the horrors these beautiful women have survived. Their courage and honesty are both inspiring and confronting. And that is without even talking about their strong and unique works of art, which I find to be comforting and challenging (as art should be, perhaps).

Thank You very much for your

Thank You very much for your

Thank you very much for your warm and beautiful words!