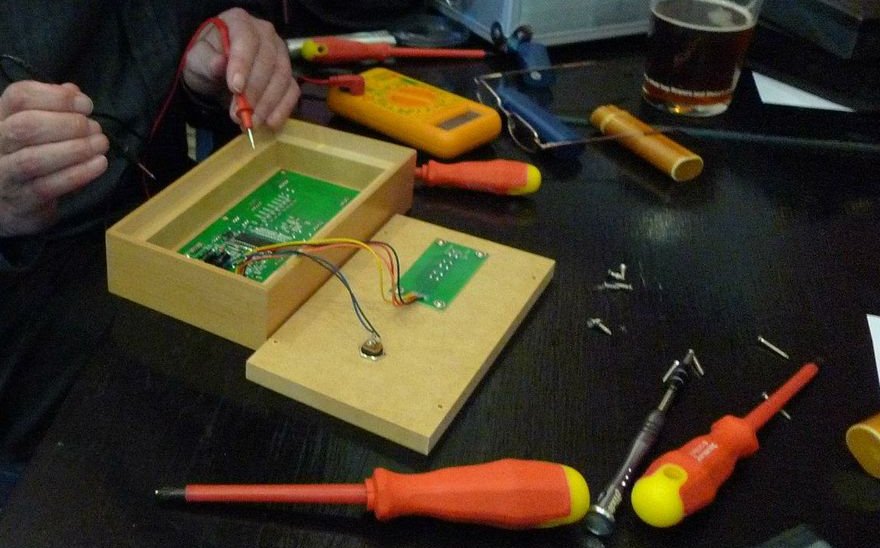 Bifurcations begin articles. Here’s one: the division that has emerged within the ‘green movement’ between, on the one hand, what we might call Apostles of the Coming Tech Salvation, and, on the other, the quill/scythe-wielding neo-Luddites, donning a smock of self-sufficiency and strolling smugly from the wreckage of full-scale systems collapse.

Beginning to stitch a tentative thread between the two is The Restart Project. Founded in June 2012 by American/British activist and communications professional Janet Guthrie and Italian researcher and ICT4D critic Ugo Vallauri, The Restart Project is concerned with encouraging a deep rethink of contemporary attitudes towards technology. So far, this desire is primarily expressed and engendered through a series of London-based Restart Parties. People with defunct or malfunctioning items of technology – broken laptops, outdated smart phones – are paired up with knowledgeable volunteers, and a journey of restorative discovery is embarked upon. So far, these events have been clustered around Camden, where Ugo lives, in North London, and Brixton, where Janet lives in the south. Pubs, libraries, galleries, community centres: “anywhere where we have tables and outlets,” Janet tells me during an hour-long chat in their endearingly Spartan office just by the River Thames in Blackfriars.

“We only moved in two days ago,” says Janet, and it shows. In a largely empty room inside Audit House – a previously unoccupied Edwardian block on the Victoria Embankment managed by innovative charity 3Space – is one desk, two chairs, a stand-alone heater (it’s snowing outside on the day I visit), and a small side-table carrying two broken printers and an old netbook. My little old Nokia 6230i feels right at home. Janet herself is using a refurbished MacBook Air, plugged into which is her perennially about-to-be-fixed HTC. “It seems like it was designed to fail,” she says of the phone. “We can go in and hack it or ‘root’ it – erase the firmware that it came with and put something more basic on – but I’m always the last priority at our parties, so it’s just never happened!”

So far, these parties have been kept casual and fun (Janet is adamant that they are not simply offering a free fix) in order to begin to build an active community in London. All sorts of people have attended – from “young people with hi-tech sound equipment to older people and students who simply can’t afford new devices”. By keeping them intimate and leaving room for spontaneity, the events maintain a certain excitement. “An older woman came with a mini-tablet she’d been given as a gift. She was really excited about it but couldn’t configure it properly, so we encouraged one of the guys who was waiting for help, to help her out. In half an hour she was dancing around the room, so excited! Recently, we had a teenager turn up, tear down someone’s fifteen year old printer, clean it all and fix it. It’s kind of magic – there’s always someone who you can help.”

Not many people are comfortable with talking about what a future economy might actually look like, with really discussing the idea of degrowth.

Their approach may have sprung in part out of local initiatives such as Transition Belsize, and Brixton’s forthcoming Remakery, but Janet sees The Restart Project as very much part of a broader global network. “Part of our inspiration for the project comes from the fixing that goes on elsewhere – especially in Asia, Africa and Latin America.” Both Janet and Ugo have extensive experience in the use of technology in developing countries – Ugo in encouraging farmers in rural Kenya to use video to share farming best practice; Janet in helping urban reform collective Frente de Luta por Moradia in harnessing social media to change public perception. A crowdmap they’ve recently set up includes other organisations such as the pioneering Repair Cafes in Amsterdam, Remade in Edinburgh, Melbourne’s Fix It Community and Community Glue Workshop in Chicago. But whilst many of these are keen to retain the intimate circle-of-friends atmosphere, The Restart Project is potentially much larger in scope: “we feel the urgent need to scale this,” says Janet.

So far, a small amount of funding has come from Timberland’s Eartherkeepers Grant, but Janet and Ugo also do events within universities and are trialling a corporate team-building event. “We’re really keen to stand on our own two feet,” explains Janet. And it’s important they do, because their long-term objectives are ambitious but potentially extremely important. Now registered as a Charitable Incorporated Organisation, their long-term plan is to help shape both industry and consumer change by demonstrating the desire and the numbers behind a new way of thinking about technology. Before then the next project on the list, which they’re hoping to commence in earnest later this month, is a social review platform focusing on repair shops and people – a kind of TripAdvisor for tech-repair that would give immediate advice on competent commercial repair.

As our conversation draws towards a close, Janet points out another bifurcation – that between the Apple Genius Bar on the one hand and the guy selling mobile phone covers down at the local market. With the area around Tottenham Court Road now largely replaced by Primark and the like, the middle ground is falling out of the world of technology repair. “But do repairers actually need to have storefronts?” Janet asks. “Could they share space or pop up?” This where The Restart Project would step in. “Trust is the issue here,” explains Janet, an issue which the kind of repair platform they’re suggesting would go a long way towards solving. “We feel like it’s really fertile ground,” she continues, clearly fascinated by the potential futures of what they’re working towards.

At the heart of what Ugo and Janet are trying to do is to think about how a future economy might function. “Not many people are comfortable with talking about what a future economy might actually look like, with really discussing the idea of degrowth. NESTA has talked about it – but it’s still quite uncomfortable to actually suggest that people should buy less stuff. It’s like the ultimate taboo.” The Restart Project offers us the chance to address this conversation directly, picking a careful path between the blindness of urban tech-futurism and a blinkered rural retreat. <<< Your computer needs to be restarted in order to finish the updating process. Postpone. Restart Now. >>>